GrafTech was acquired in 2015 by the private equity firm, Brookfield Asset Management, Inc., for $1.25 billion during a time of poor earnings and severe downturn in the steel industry. The company generated $45M in EBITDA on $530M in revenue at the time. Brookfield repositioned the company by selling non-core assets, consolidating six manufacturing operations into three, and focusing on performance improvements using ‘lean manufacturing’ and ‘six-sigma’ techniques. GrafTech now produces more from three plants than it did previously from six plants, and achieved $100 million in annual cost savings. Continuous performance improvements and an emphasis on product quality led to increased customer satisfaction. The financial results have been stunning and are described below.

GrafTech completed a successful IPO in April 2018. As of Dec. 2019, Brookfield still owns approximately 74% of the common stock.

What makes GrafTech a great business and good acquisition candidate

The graphite electrode market is highly competitive, but GrafTech has several advantages that create a durable and long-lasting moat.

GrafTech has a wholly-owned source for a constrained, key raw material. Graphite electrodes are manufactured using petroleum needle coke. To secure a long-term supply of needle coke, GrafTech acquired Seadrift Coke LP in 2010 in a prescient move. Lithium-ion batteries, used in the rapidly growing base of electric vehicles, also use needle coke for battery-pack cathodes. This is creating competing demand for this essential raw material. 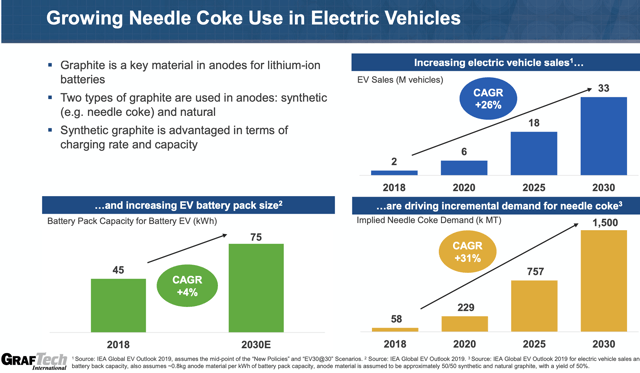 Seadrift is the second-largest petroleum needle coke producer in the world and can supply two-thirds of GrafTech’s internal needs with higher quality and lower cost needle coke than third-party sources.

Vertical integration, combined with the scale of large efficient plants, has made GrafTech a low-cost producer. Management believes its cost advantage is $1,000/MT (million tons) over low-volume plants. Its current production capacity is 202,000 MT annually. It supplies 24% of the world’s graphite electrodes, outside of China.

GrafTech’s graphite electrodes have the highest quality in the industry in terms of durability and infrequent breakage. In addition, GrafTech offers the most advanced support and technical service platform industry with real-time diagnostics and troubleshooting.

Barriers to new entrants are high and suppliers are fairly consolidated outside of China. The manufacturing process is long and requires vast experience. Management estimates that a new electrode manufacturing facility would require three-to-five years and a high capital investment to construct. Extensive manufacturing experience precludes new entrants into this market. Smaller manufacturers with poor capitalization will struggle to expand.

There is no substitute for graphite electrodes in the EAF process.

Steel production is an essential, though cyclical, business in most modern economies. Since 2000, the total world steel production has grown at a CAGR of 4.3%. Most of that growth, however, has been in China. World steel production decreased during the 2008-2010 financial crisis and again in 2014-2017 due to excess inventory and slowing global growth. In 2019, China produced 53% of the world’s steel.

Exports of Chinese BOF steel in 2011-2014 took market share from non-Chinese EAF steel producers. This created an oversupply of graphite electrodes and led to industry-wide inventory de‐stocking and severe price cutting. GrafTech’s realized price for graphite electrodes decreased from a 10-year average of $4,500 per MT to $2,500 per MT in 2016. As a result, management believes that the industry permanently closed or repurposed 20% of the global graphite electrode production capacity between 2014-2016. Demand for graphite electrodes rebounded in late 2017 as increases in EAF steel production, reductions in Chinese steel exports, and constrained supply of needle coke took effect. Spot prices reached record highs in 2018, though moderated in 2019. Spot prices are expected to decline again in 2020.

To mitigate the impact of these disruptive price variations, GrafTech implemented a three‐ or five-year, ‘take‐or‐pay’ contracting strategy in late 2017. With 6-month lead times for an essential consumable, steel producers are focused on securing certainty of supply of high-quality graphite electrodes. Within this framework, customers agree to purchase a specified volume of product at the fixed price each year. The company has already contracted roughly 60-65% of its annual production capacity over the next three years at a weighted-average price of approximately $9,600 per MT.

GrafTech is uniquely capable among graphite electrode producers to implement these ‘take-or-pay’ contracts due to its substantial vertical integration with petroleum needle coke production. All of Seadrift’s petroleum needle coke production is used internally and is not sold to external customers. These long-term contracts give GrafTech visibility, stability and profitability over the next three years on a significant portion of its business.

Table 1 below shows selected financial results for 2018 and 2019. Net operating margins were 59.4% and 54.4%, respectively. Net income was $854M and $745M, respectively. Capital expenditures are in the $64M to $68M range. The long-term debt of $1.8B is high at 160% LT debt/cap, but is being repaid rapidly from cash flows generated by the business. This debt structure is an artifact of its pre-IPO ownership with Brookfield. It will be discussed briefly in the next segment below. 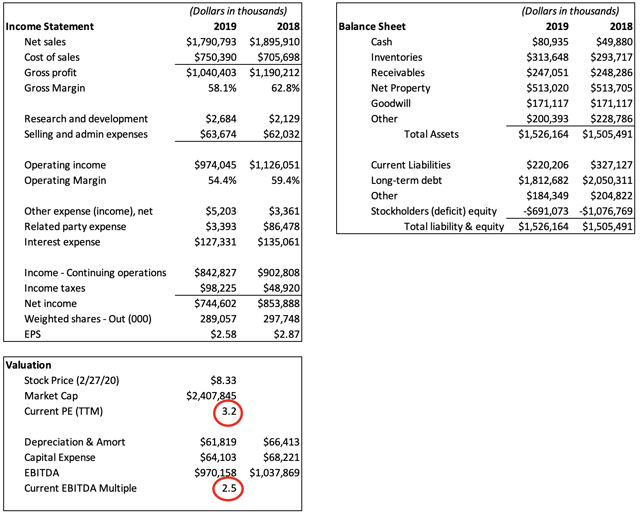 In summary, these are extraordinary financial results for an industrial manufacturing business by almost any measure. It meets Berkshire’s requirement for good returns on the net capital required for operations. This proves an old investment adage is true once again: “There’s riches in niches.”

GrafTech is heavily undervalued at the current $8.33 stock price and $2.41B market cap as this article is being written (Feb. 26, 2020). By normal valuation methodologies, that is: typical PE or EBITDA multiples, the company is discounted from its true intrinsic value by up to 70% or more. The obvious explanation is that the company is linked to the currently out-of-favor steel industry, trade-war concerns, coronavirus, and a thin volume of share traded daily. Its narrow investor base, that is: 74% of the shares held by a single investor (Brookfield), contributes to this.

Looking forward to 2020 and beyond, domestic and international steel producers, such as Nucor, United States Steel (NYSE:X), and ArcelorMittal (NYSE:MT), uniformly indicated in recent quarterly analyst calls that the high inventory levels which depressed prices throughout 2019 diminished in the fourth quarter of 2019. Pricing has bottomed out. They are forecasting a return to positive, albeit modest, growth in the second half of 2020 and beyond. As the steel producers return to historical growth trends and the negative industry sentiment moderates, the market cap of GrafTech may approach $7-8 billion. This is based on historical, yet still conservative valuations; that is PE=9 and EBITDA multiple=8X. This is a sensible and fair price for Berkshire to pay for GrafTech. Such an acquisition would be similar to Berkshire’s purchase of Precision Castparts – an opportunistic buy of a great industrial manufacturing business recovering from temporary industry pressures.

GrafTech will likely be acquired in the next year to two. The only question is when and by whom. Looking at its ownership history and timeline provides insight into the economic forces driving this highly-probable outcome.

Summarizing, Brookfield has realized $2.1 billion in cash so far on its $1.25 billion investment. In addition, it is still holding an undervalued ($1.8 billion) asset that could be worth $5-6 billion when normal market values return. The author has consulted with private equity firms in the past. They provide tremendous value when done right. It doesn’t get better than this example.

The essential question for Brookfield is how to sell its remaining 74% stake in GrafTech in a way it preserves, if not creates, value. Investors familiar with the private equity business model know that most private equity portfolio companies are sold in 4-6 years. This enables the private equity firm to return its investors’ equity and profits in a timely manner. 2020 is the 5th anniversary of GrafTech’s purchase. It is safe to say that Brookfield is highly motivated to sell its remaining share in GrafTech in a single block transaction as the market returns to historical valuations. At a market cap of $8 billion (i.e., $28/share), GrafTech would still be an exceptional acquisition for Berkshire, or some other strategic investor(s).

GrafTech is a great investment opportunity for small retail investors. It holds limited appeal to institutional investors because of its limited float of shares and its large, motivated-to-sell, single shareholder. If your investment horizon is 2 years or longer and you like undervalued, exceptional companies with a durable moat and strong financial results, GrafTech has a lot to offer. It’s an attractive investment at its current discounted price – even if the business isn’t acquired. If it is acquired, as I predict, the returns will be exceedingly handsome.

Disclosure: I am/we are long EAF, BRK.A, BRK.B. I wrote this article myself, and it expresses my own opinions. I am not receiving compensation for it (other than from Seeking Alpha). I have no business relationship with any company whose stock is mentioned in this article.