This is a real research report that we traded and profited from!

When the coronavirus hit the world, markets got decimated. To make matters even worse, when Saudi Arabia saturated the oil market, resulting in a level of market destruction that we’ve never seen before.

Most people saw their portfolios drop substantially over a short period – a scary thing to see!

However, what most people don’t realize is that even if the market comes back, the government’s response to the market crashing is a real threat to your long-term wealth.

I am referring to currency risk, what most people understand as inflation.

All the stimulus that the government is adding to the economy is not good for your long-term wealth. Where does that money come from? The short answer is the federal government borrows it by issuing US treasury bonds.

The original plan deficit for 2020 was set at about $1 trillion. Now that figure is coming in at $3.7 trillion, which is almost 18% of total GDP. To put that number in perspective, even during the Great Depression, the deficit never exceeded 10% of GDP.

In addition, the federal reserve has cut interest rates all the way down to near zero. In theory, this should entice businesses to take out loans, which, in turn, will boost the economy through business spending.

But this also has another effect, by making money cheaper, over the long haul, it makes money worth less.

The main thing that you should take away from this is that just about every tool the central bank has to boost the economy weakens the US dollar and creates inflationary pressure on the currency.

This means that even though you might have the same amount of dollars in your bank account, it’s going to take more dollars to buy the same goods.

Let me explain it this way…

Let’s assume you had $10,000 in cash going into the coronavirus pandemic with zero market exposure. While most people were losing their shirt, you were sitting pretty. You didn’t lose a thing, you didn’t get laid off, and didn’t have to take a pay cut.

However, now when you go to the grocery store, a gallon of milk that once costs $5 now costs $6. That’s a 20% increase in price… And the rest of the goods that you purchase regularly also increased by 20%.

Even though you don’t feel like you lost money, this would have the same effect as someone who had $10,000 in the stock market, losing $2000, so the total value of their portfolio is $8000, but then there was no stimulus, and the prices of goods remain the same.

Unfortunately, most people don’t fall in either of the categories listed above. Most likely, they lost money in the stock market, and in addition, will get hit with inflation in the years to come… A double whammy!

It is not just happening here in the US, but all the world currencies are losing value for the exact same reason.

So, What Can You Do About This?

You need to get your hands-on things of value that are in limited supply. If your government is printing money, you’re taking a loss as you read this, whether you realize it or not.

In the currency space, when one currency drops, another one rises. But when all the fiat currencies are falling at the same time, there are not that many options left. Yet, the few options that are left should have a substantial increase.

If you can’t get your hands on a Leonardo da Vinci painting, then investing in gold or bitcoin, both with limited supply might be suitable substitutes.

Gold is already up 12% in 2020, so you might be thinking it may not be wise to invest in gold when it’s already at a high point. And that would certainly make sense, but we feel things are just starting to heat up in the precious metal space.

Here we are going to use the buy high and sell higher strategy. The uptrend in gold has every reason to continue.

Currently gold is trading just north of $1700 per ounce, and it’s already had a great run so far this year. However, we feel gold could trade up to $2500 per ounce within the next year.

If you have the option to buy gold coins, that is certainly a viable option. For people who don’t want to own and store the gold themselves, one of the easiest ways to buy gold is through your broker account through the SPDR Gold Shares Fund (GLD).

The GLD is a fund that actually buys gold and stores it on your behalf.

However, here we want to play the GLD aggressively with options.

I also want to hold some gold for the long-term, but here I am looking at VanEck Vectors Gold Miners Fund (GDX).

When the price of gold increases, the companies that mine gold often increase in value more than the asset itself. For this reason, owning the GDX for the long-term makes a lot of sense.

The GDX is a $14 billion ETF that holds over 50 gold mining companies. Some of the largest ones include Barrick Gold (GOLD), Newmont (NEM), Franco-Nevada (FNV).

Gold recovered quickly from March’s sharp drop. It is currently trading above its 200-day moving average, which is a bullish sign indicating it is likely to rally from here. 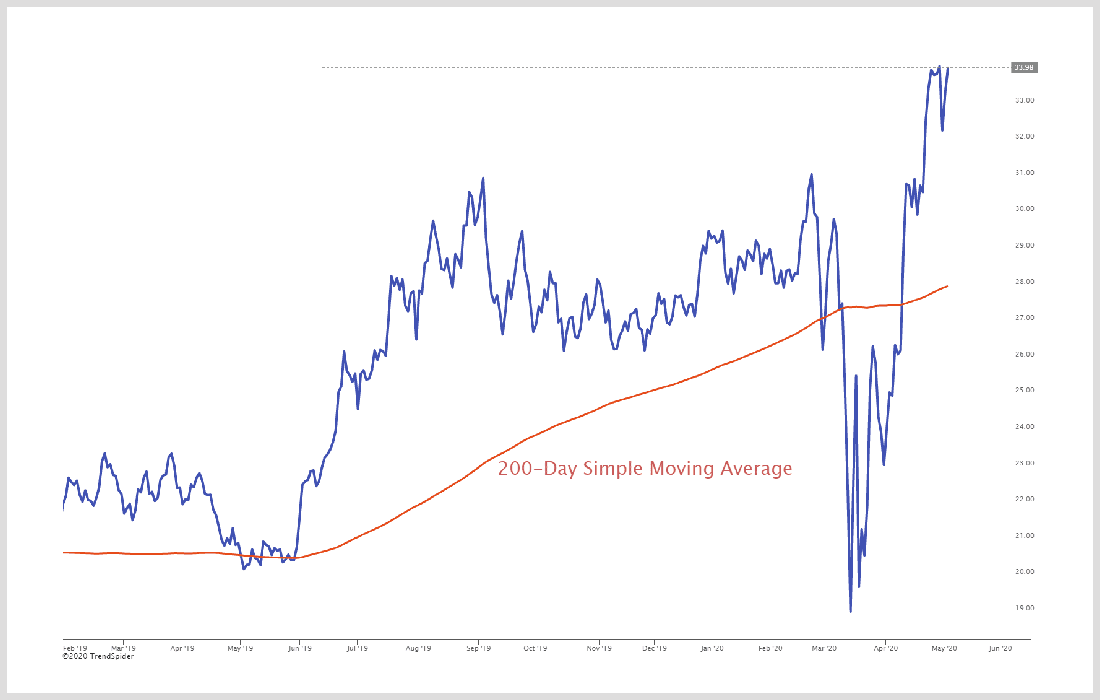 I wouldn’t mind straight out buying the GDX right here today, but I’d like to own it for a slightly better price. So, what I’d like to do is sell one June 32 put for the price of $1.68.

If the GDX continues to trade higher, we will keep that $1.68 as profit. However, if the GDX falls below $32 a share, we will be assigned the ETF at that price. But because we received $1.68 by selling the put, our adjusted cost basis would be $30.32.

Click here to download our short-put calculator. This will help you understand the benefits of selling downside puts instead of buying the asset itself.

So What's Your Next Wealth Building Plan?

Option Strategies Insider is the true and easy way to understanding options
strategies while trading with confidence. Grow you opportunities today.

No credit card required - Get started in seconds