China acts as an Asian economic hub, which means this data should positively influence the entire region. This explains why the All Asian ex-Japan ETF (NASDAQ:AAXJ) is in the middle of a very strong rally: 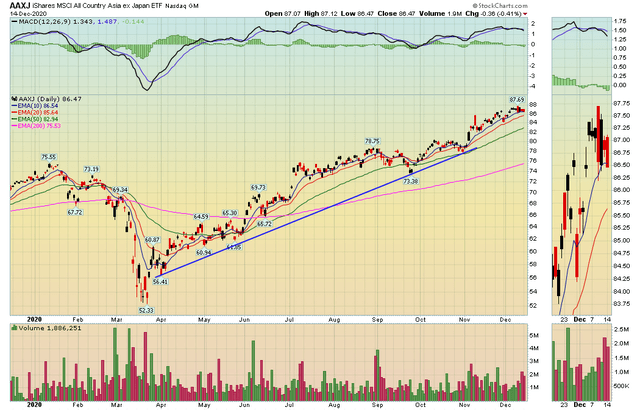 Like all equity indexes, this ETF cratered in the spring. But it has been in a steady rally ever since and is now near a 1-year high.

Industrial production increased 0.4 percent in November. After having fallen 16.5 percent between February and April, the level of the index has risen to about 5 percent below its pre-pandemic (February) reading….

Here’s the table from the release:

Here’s a chart of the data:

Industrial production increased sharply for the first few months after the lockdowns. It’s still rising but at a far slower rate.

Here’s something else to consider from the report:

Capacity utilization is still down.

On Tuesday, December 15, there was an important confab on further stimulus spending (emphasis added):

The top four congressional leaders plan to meet Tuesday afternoon to discuss a coronavirus relief package and a sweeping spending bill, as Congress races to find an agreement before critical support programs expire at year’s end.

Treasury Secretary Steven Mnuchin, who spoke to Mrs. Pelosi earlier Tuesday for more than an hour, will also call into the meeting, Mrs. Pelosi’s spokesman said on Twitter.

According to the Washington Post, this is the first time the leaders have met in months, which is why this is being viewed as a very positive development.

What a great day for small-caps, which once again led the market higher. Large-caps also had decent moves, while the long-end of the treasury market lost a bit.

Interestingly, real estate and utilities – two defensive sectors that are interest-rate sensitive – were the top-performing sectors. Energy rounded out the top three slots. Other cyclical also did very well.

So, what caused this rally? Early Tuesday, many people commented that it was positive news from Apple (NASDAQ:AAPL). But I think there’s was a strong political element to the move. First, the Senate Majority leader formally recognized the new administration, which means the formal transition has officially started. Second, Tuesday’s stimulus talks meeting could be a significant move forward since all the key players are actually meeting face-to-face. It has all the looks of the first, really serious, get-together for some time.

Let’s place Tuesday’s (December 15th) activity into a longer-perspective by looking at the 30-day charts, starting with large-caps. 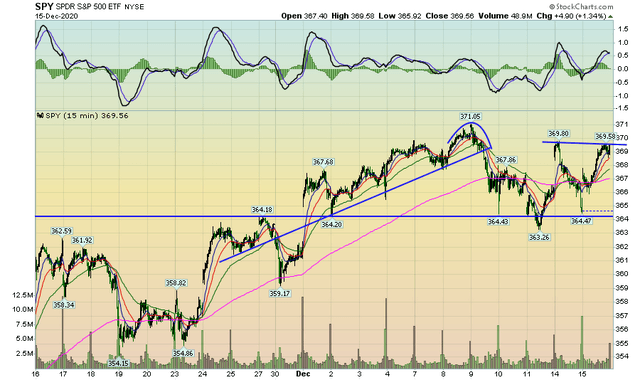 The SPY hit levels from Monday’s open but is still below highs from last week. 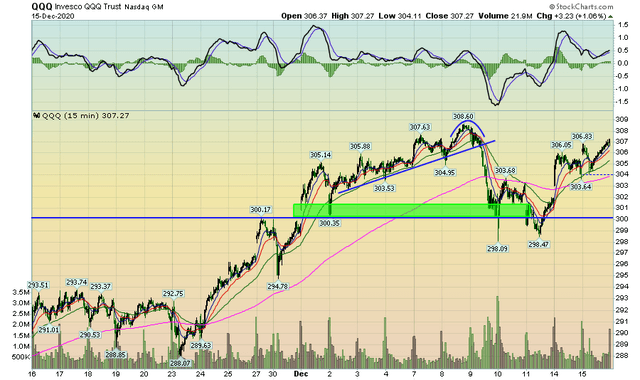 The QQQ is also still below highs from last week. 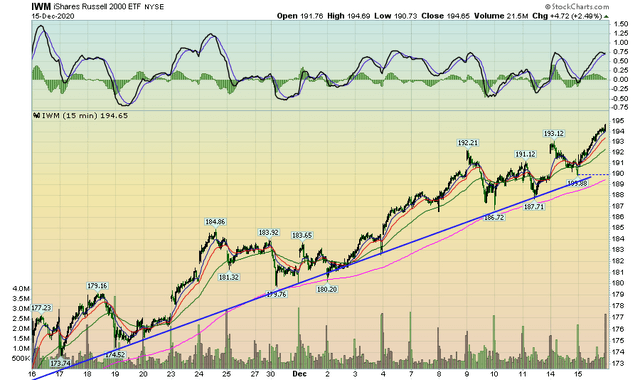 So, does this upend my “markets won’t move much for the rest of the year” thesis? We’ll have to see.