The video conferencing company smashed analyst estimates for another quarter. FQ1 revenues smashed estimates by $125 million with a target just above $200 million while FQ2 numbers blew past estimates by $163 million, reaching $664 million.

While the updated FQ2 estimates were for revenues to jump to $500 million sequentially from only $328 million in the prior quarter, the FQ3 estimates are for only minor growth. Zoom is already seeing sequential growth falter with guidance for meager growth of only 4% in the current quarter. 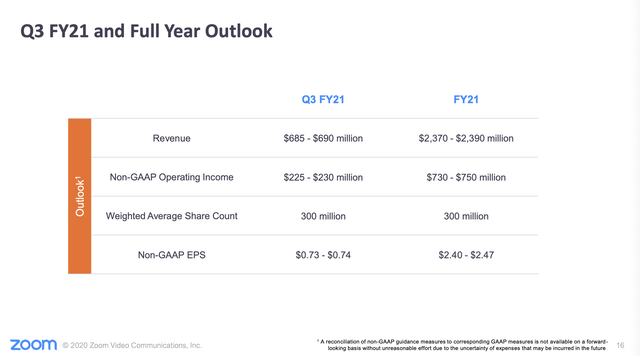 A prime reason is that even during the last quarter, the company saw a substantial reduction in the number of new customers signing up for its cloud video conferencing products. FQ2 customers additions with more than 10 employees were an impressive 105,000 to reach a total customer count of 370,000. The prior quarter saw these new customers trump those amounts at 183,000, but Zoom Video only had 81,900 customers heading into this fiscal year. The company was only adding 30K new customers with 10+ employees a year and Zoom Video nearly added 10x this amount in the last six months.

With the recent quarter ending July 31, Zoom has plenty of insight into customer growth into FQ3. Apparently, the pace of adding new customers has clearly slowed to provide such limited sequential revenue growth.

Even the BofA analyst slapped a $475 target on Zoom Video based on FY22 revenue target of only $3.1 billion. Again, this revenue number sounds impressive until realizing the company is running at an annual rate of $2.8 billion now. Analyst Nikolay Beliov is only targeting 10% revenue growth from the current run rate for next fiscal year. The actual targeted growth rate for next year is a meager 22.6% and exactly why the price target is only slightly above where the stock closed on Tuesday.

The price target based on 300 million shares equates to a market cap of $142.5 billion. One doesn’t need a lot of detailed math to understand that these numbers don’t jive from a logical standpoint. Zoom Video will need to zoom past this revenue target in order to generate stock gains from here.

Even with 40% operating margins and zero income taxes, Zoom Video would only generate $1.2 billion in profits next year based on the $3.1 billion revenue estimate. Since the company targets spending more after only spending $29 million on R&D in the last quarter, the company is likely to see operating margins dip closer to 20% which pushes profits to only $600 million for a stock with market cap targets above $140 billion.

With demand-pulled forward years, investors have to question whether these FY22 targets are enough to justify such an expensive stock now facing headwinds and increasing competition in the cloud video conferencing sector. The market will not continue paying this price for Zoom Video without the company growing sales at a much faster annual clip than current estimates. The business has to be more than just pulling forward sales to an elevated level to justify higher prices.

Investors might want to dig more into the details from 2000 in comparison to the valuation multiple of Zoom Video now. Back in 2000 at the bubble peak, stocks such as Cisco Systems (CSCO), QUALCOMM (QCOM) and Amazon (AMZN) traded at trailing P/S numbers in the 35x to 40x range. This number is historically rich considering the stocks mostly traded below 10x trailing sales before and after the bubble.

In essence, Zoom now trades at the peak 2000 levels of these leading tech stocks when using forward sales estimates. The trailing P/S ratio is far in excess of a company like Qualcomm and Amazon back in 2000 when growth was unlimited.

Another way to view the staggering valuation of Zoom Video now is seeing that Qualcomm has annual sales topping $21 billion, but the stock has a smaller market cap than Zoom Video at only $134 billion. Not all of the current tech stocks trade at similar outlandish valuation multiples similar to the peak in 2000, but Zoom Video is now the first example of topping those multiples. A few other tech stocks are trying to quickly catch up.

A realistic target for a company with 20% revenue growth next fiscal year is a P/S multiple maxing out at 10x sales. A stock such as Zoom Video would only trade at a $30 billion valuation or $100.

The possibility definitely exists for revenues topping the current analyst consensus around $3.0 billion, but the video conferencing company would have to substantially exceed these numbers to justify a stock price even half of the current level. If Zoom Video grew FY22 revenues by 50% and hit $3.6 billion for the year, a 15x P/S multiple for the stock only generates a market valuation of $54 billion.

The key investor takeaway is that Zoom Video is already trading at a P/S multiple far in excess to some of the greatest tech survivors of the 2000 crash. The stock trades at an astronomical value while some under the surface trends are pointing to a substantial deceleration in growth trends. The company is likely running into huge hurdles finding companies with more than 10 employees that didn’t sign up for Zoom during the COVID-19 shutdown.

Investors must start looking for an exit point here with a potential realistic target for the stock down closer to only $100.

If you’d like to learn more about how to best position yourself for a rally in beaten-down stocks due to COVID-19, consider joining Out Fox The Street.

The service offers a model portfolio, daily updates, trade alerts and real-time chat. Sign up now for access to legacy pricing available to the next 15 subscribers.

Disclosure: I am/we are long QCOM. I wrote this article myself, and it expresses my own opinions. I am not receiving compensation for it (other than from Seeking Alpha). I have no business relationship with any company whose stock is mentioned in this article.

Additional disclosure: The information contained herein is for informational purposes only. Nothing in this article should be taken as a solicitation to purchase or sell securities. Before buying or selling any stock you should do your own research and reach your own conclusion or consult a financial advisor. Investing includes risks, including loss of principal.