Very rarely (if ever?) has a company in a legacy industry with severe revenue challenges (yellow pages, newspapers, terrestrial radio, etc.) not been buried under excessive amounts of debt. Historically, when times were good and cash flow was robust, these companies overleveraged their balance sheets as they attempted to grow and reward shareholders with juicy dividends. They all paid the price for their financial mismanagement and entered Chapter 11 bankruptcy proceedings to reorganize and lower their leverage. Yellow Pages was no exception, emerging from a reorganization in 2012 with $800M in senior notes and $108M in exchangeable debentures. Having repaid the senior notes last year and with a plan to retire the exchangeable debentures in 2021, the company started prudently returning cash to its shareholders. This is a feat that not many other melting ice cubes accomplished, as all their cash flow still flows to their debtors.

Much of the credit goes to Mr. David Eckert, who came in after the previous CEO’s strategy of growth by acquisition failed miserably. Mr. Eckert sold or shut down unprofitable businesses. He understands that revenue growth for the sake of revenue is a complete waste if the business cannot generate meaningful profits. I am thankful that Mr. Eckert recently re-signed with YPG to remain at the company for at least the next three years. From an investor’s standpoint, his leadership has been outstanding. The early repayment of both the senior notes and exchangeable debentures has led to financial returns to shareholders in 2020, beginning with the first dividend payment in over eight years.

The company’s second-quarter earnings release contained several positive developments that were catalysts for the stock, as the share price shot up nearly 30% that day. First, the adjusted EBITDA margin hit an unheard of 47.5% – enabling strong cash generation during the quarter. 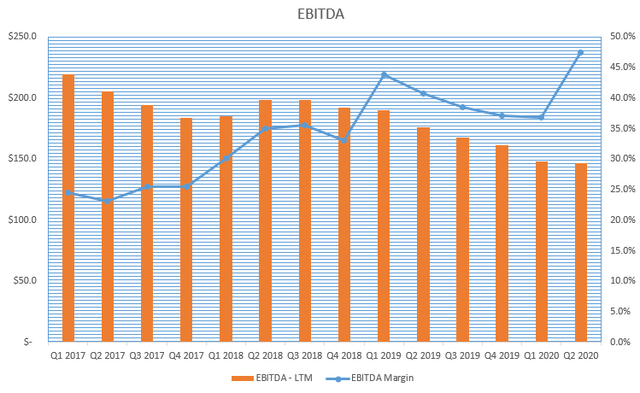 The company did warn it expects pressure on its margins for the next few quarters as it ramps up investments to stabilize the business. The company also reported that COVID-19 had only a modest effect on revenues. I was concerned about a potential steeper loss of customers as more SMEs closed for good, but YPG’s comments are encouraging:

Equally encouraging are the company’s attempts to bend the revenue curve toward a more sustainable trajectory. Currently, digital revenues are declining at an unsustainable pace. 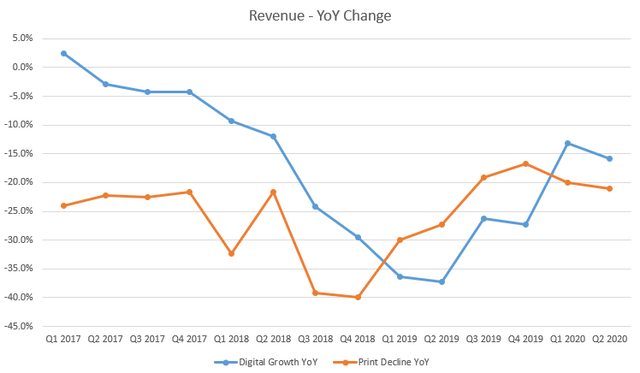 While the company has done an excellent job at expense control and reducing financial liabilities under Mr. Eckert, it hasn’t really spoken about how it will address its revenue problem. With the Q2 earnings release, it did provide investors a few details about its new strategy.

Last September YPG promoted Sherilyn King to Corporate VP Sales, Marketing & Customer. Mr. Eckert spoke favorably of her on a recent conference call. I am excited to learn more about these new products and am encouraged to see the company carefully designed them – utilizing testing to make sure the investment will be worth the effort. I am hopeful that these new initiatives and products will bend the revenue curve toward stability. After all, the company cannot cut its way to growth. The current level of cash flow is great but completely unsustainable should this revenue trajectory continue. This is why the stock trades at such a low P/Free-Cash-Flow multiple, despite also having a low Enterprise Value. It goes without saying that stabilizing revenue has to be a top priority for the company.

YPG should generate $100M in FCF in 2020 ($56M through Q2). That is about a 33% FCF yield at the current share price. Clearly, the market is skeptical YPG will ever stabilize revenues. Print will probably continue to decline 20-25% for the foreseeable future. Thankfully, that is becoming a smaller piece of the pie (25% in first half of 2020). The first challenge for YPG should be to get the overall revenue decline rate under 10% (currently a ~16% decline). If the economy in Canada can remain on a decent footing, I would like to see the company hit that milestone within the next 12 months. If YPG can achieve this, I think shares can trade up to the mid- to high teens (FCF yield drops to ~20%). Beyond that it is difficult to predict… time will tell.

There is room to increase cash returns to shareholders via dividend increases and/or additional stock buybacks (currently limited to $5M in buybacks until the debentures are repaid). A doubling of the dividend will only cost the company a total of ~$22M a year and would equate to an ~8% yield at the current share price. It would be a welcome move for long-suffering shareholders. The stock is so thinly-traded due to its low float that it would be difficult to buy back a meaningful number of shares, unless one of its large shareholders decides to move a block.

YPG is in no way out of the woods yet. It needs to stop the bleeding if it ever has the hope of remaining a viable business for the long term. However, at the current market cap and having eliminated its debt, I think the downside is limited. Even as a terminal business, YPG can generate a ton of free cash flow – I believe at least its current market cap. The company has been very prudent with its capital under Mr. Eckert. I expect meaningful financial returns for shareholders in the coming years via dividends and buybacks. The company’s major shareholders will likely drive the ultimate endgame for YPG (go private, sale or merger). However, I am hopeful for a significant improvement in the revenue decline rate in the coming quarters. Small incremental improvements in revenue will likely continue to be mostly ignored by the market. But an improvement to a single-digit decline rate in digital revenues will pique some interest from investors, which can easily and quickly drive shares back to the high teens. This would be a solid move higher for investors and return shares to a level not seen in nearly four years. On the other hand, if the growth initiatives do not generate any meaningful improvement in revenues, it will increasingly look like the business is terminal and should be valued as such. I suspect we will have a better idea of which direction the company is going within the next couple of quarters. Best of luck to all.

Disclosure: I am/we are long YLWDF, YLWWF. I wrote this article myself, and it expresses my own opinions. I am not receiving compensation for it (other than from Seeking Alpha). I have no business relationship with any company whose stock is mentioned in this article.

Vanguard Extended Duration Treasury ETF: Expect It To Remain Rangebound In The Next Year (NYSEARCA:E...
How The U.S. Elections Could Impact Markets
Exxon Mobil: Will Oil Be The Next Tobacco Or Coal Matters More Than The Dividend (NYSE:XOM)
High-Potential Mineral Explorers Flying Deep Under The Radar: Fosterville South Exploration (OTCMKTS...
Inflation Is A Proxy For GDP: Harrison
Rent Control: The Dirtiest Words In Real Estate Investing
Noteworthy Friday Option Activity: ZS, COST, APY
3 Things I Think I Think - Market Bonanza!

Value On The Street