Editor’s note: Seeking Alpha is proud to welcome The Methodical Investor as a new contributor. It’s easy to become a Seeking Alpha contributor and earn money for your best investment ideas. Active contributors also get free access to SA Premium. Click here to find out more »

Winnebago Industries, Inc. (WGO) stock has recently fallen after rallying strongly in the spring. This may prove to be a good buying opportunity as the company is finally starting to see the results of a multi-year strategy of targeted acquisitions begun in 2016. With a strong balance sheet, more diverse product line, and growing market share, Winnebago is poised to take advantage of continued demand growth in the sector.

Recent vaccine news has created optimism that a vaccine rollout and the end of the pandemic are in sight. Stocks in most RV manufacturers fell in response to the news. The consensus with regards to RV stocks is that recent strength in RV sales is a pull forward and that current sales are borrowing against future demand. The expectation is that sales will mean revert in conjunction with the vaccine rollout.

However, with the hotel industry not projecting a return to 2019 occupancy rates until 2023, recent strength in the RV sector and the associated bump in revenue can last longer than many expect. While some of 2020’s demand was undoubtedly due to a temporary shift in leisure spending resulting from travel restrictions, the pandemic may cause some to re-evaluate their travel preferences and trade in overseas trips for drivable destinations. Winnebago Industries finds itself in a strong position to benefit from this shift in travel; after building up its brand portfolio in recent years while simultaneously keeping an eye on the balance sheet, the company finds itself poised to take advantage of a continuation in recent trends.

Both Winnebago’s income statement and balance sheet have weathered the ongoing pandemic well. The company bounced back strongly from a fiscal third quarter marked by the uncertainty of the crisis. After a stop in operations caused revenue to contract to $402 million in Q3 and resulted in a net loss of $12.4 million, the company bounced back to $737.8 million in revenue and $42.5 million in earnings in its fourth quarter.

When considering the full 2020 fiscal year, Winnebago saw record sales with an increase of over 18% from FY 2019, going from $1.99 billion to $2.36 billion. Where the company did see some challenges, however, was in net income which fell 45% from $111.8 million to $61.4 million. Gross and net margin ratios declined by 2.2% and 3%, respectively. On the earnings call, Winnebago’s Chief Financial Officer Bryan Hughes

The “associated deleveraging” that Hughes is referring to is a refinancing done in Q4. In July, the company took steps to shore up its balance sheet when it issued $300 million in senior secured notes, most of which was used to pay off a bank loan taken out for the purchase of Newmar Corp. in the previous calendar year. Hughes explained the transaction to the Wall Street Journal saying it was done to, “further bolster our balance sheet so we could weather any kind of storm that might be thrown out.”

Replacing the bank loan with debt will definitely give the company greater flexibility as the loan had restrictive covenants requiring the company to maintain one of its leverage ratios, its debt to earnings, at a certain level. That level was not disclosed by the company but the existence of such a restrictive covenant left Winnebago exposed, as failing to maintain the ratio would have pushed it into technical default. If this were to have occurred, the company could probably have negotiated a modification to the terms of the loan but that would have come with associated fees and probably a higher interest rate. However, even if the company was in no danger of breaching the covenant, its existence may have prevented Winnebago from considering future acquisitions given the impact they would have had on its financials. The refinancing was a factor cited by S&P Global Ratings in revising the company’s debt rating to stable from negative in early July.

As far as its overall debt load is concerned, the company currently has $512.6 million of debt sitting on its balance sheet which is a manageable amount. For comparison, Winnebago’s debt/equity ratio of 66.2 is lower than that of market leader Thor Industries, Inc. (THO) with its debt/equity ratio of 72.7. The company has even been able to return some money to investors. After suspending its dividend in October 2008 as a response to the Great Financial Crisis, the company reinstituted it in 2014 and has since increased it several times, most recently this past quarter when it increased it by $0.01 per share to a level of $.12 per share.

Growth of the Brand Portfolio

Maintaining a strong balance sheet is critical if Winnebago wants to continue the strategy of growth through acquisition that it has undertaken in recent years. Since taking the reins and becoming CEO in 2015, Michael Happe, has led the company in becoming much more aggressive in the acquisition of other RV manufacturers, which has enabled Winnebago to diversify its brand portfolio.

The first of two noteworthy deals was the October 2016 purchase of Grand Design RV Company for $500 million. This was done to shore up the company’s towable product line and has proven to be an astute purchase. In the fiscal year ending August 2020, Grand Design’s market share was 8.7% of the overall towables market which represented an increase of 1.5 percentage points over the prior year. Winnebago’s overall market share of the US/Canada towables market was 10.1%, which is up from just 1.7% in 2016. The bulk of that growth has come from the Grand Design division necessitating the buildout of four new towable production facilities since the 2018 fiscal year, three of which were in the Grand Design division with the most recent of those completed in Q2 2020. This increased capacity will allow the company to accommodate future growth.

In November of 2019 the company also acquired Newmar Corp., a luxury RV manufacturer based in Indiana for $344 million. The purchase was done with an eye on strengthening the company’s motorhome division. Newmar is known for its solid product lineup which includes the higher-priced Class A motorhomes costing from hundreds of thousands of dollars all the way up to its super premium model, King Aire, priced starting at $1.3 million for the 2021 model. At the time of purchase the company had revenue of $661 million. Both Grand Design and Newmar have been operated as distinct business units within Winnebago Industries.

The strength of the Winnebago Grand Design and Newmar brands assisted the company in expanding its overall RV market share, towables and motorhomes combined, to 11.3% for the 12 months ending August 2020. That is 1.3% higher than a year earlier and of that .8% was organic growth. Although this may not sound like much it continues a slow-and-steady dual approach of organic growth and growth through acquisition largely begun in 2016. One has to remember that the company had a market share of only 3% of the RV market as recently as 2016. 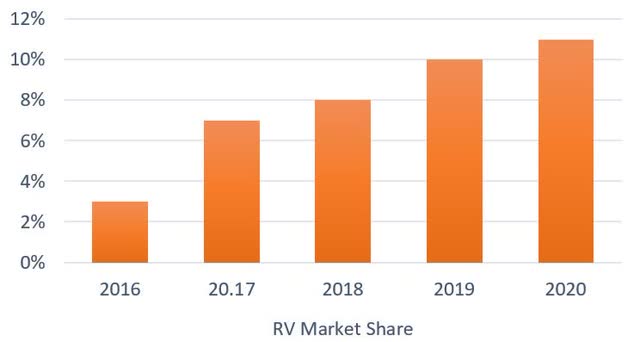 At the end of Q4 Winnebago’s order backlog was at a record, in the Motorhome category it was at $1.1 billion, an over 500% increase from a year ago. The Towables backlog was at $747.9 million, which is over 200% greater than last year. The company attributed the backlog to depleted dealer inventory, strong consumer demand and, in the case of motorhomes, the influx of Newmar orders. Although Winnebago-branded Motorhome also showed strong numbers.

A portion of this undoubtedly is a result of the pandemic as pent-up vacation and travel spending shifted to RVs as they are a good way of travelling safely while maintaining social distancing. However, the predominant sentiment that demand will dry up quickly once the pandemic begins to subside may be overly negative. It’s unlikely that the pandemic will end quickly with even the discovery of a vaccine needing many months for production even before the task of inoculating millions begins. This will be done in a low interest rate environment as the Fed recently indicated that it intends to keep rates at historical lows for an extended period. Both these factors will continue to help RV sales. In fact, the RVIA sees total industry RV shipments ranging between 414,200 and 434,500 units in 2020 and growing to between 494,400 and 519,900 units in 2021. 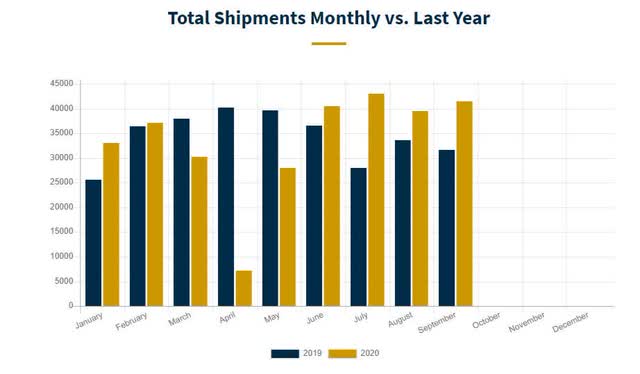 Even with the introduction of a vaccine people may be less comfortable flying on airplanes and staying in hotels for some time. STR, a hospitality industry data provider, recently projected that the U.S. hospitality sector was unlikely to bounce back to its 2019 levels until sometime between 2023 and 2025. Even if one believes those figures to be on the pessimistic side, the probability that airplane and hotel travel will fully return to 2019-levels by 2021 is unlikely. Investors can continue to expect a greater percentage of travel spending to be directed to the RV sector, even if it is to a lesser extent than in the previous 6 months.

Although the changes made by Winnebago, both operationally and in terms of strengthening its balance sheet, will help the company weather any unexpected turbulence, investors need to be aware of risks related to the stock. The leisure travel industry and the RV industry in particular are very cyclical, so if the pandemic were to get substantially worse or last several years, the negative effects could be felt by RV manufacturers. Paradoxically, a quick end to the pandemic over the winter months could push a greater-than-expected share of summer leisure travel to shift to hotels, airlines, and overseas trips. Too large of a swing could have a detrimental impact on RV sales and could possibly cause Winnebago’s revenue to undershoot.

While shares in Winnebago are down from their 52-week high of $72.65, the pullback may prove to be a good buying opportunity. Shares are currently trading at 11 times forward earnings while stock in Thor, the dominant company in the sector, is priced in at 13 times. Historically, Winnebago’s shares have often traded at a discount relative to Thor’s in terms of forward and trailing earnings but that may begin to change.

Since shifting to a strategy of targeted acquisitions the company has been able to build a portfolio of strong brands with growing market share. Since 2016, its market share has grown from a paltry 3% to 11% of the overall RV market. Company leadership is also clearly focused on maintaining a strong balance sheet, giving it flexibility to take advantage of any acquisition opportunities that present themselves in the future. When one combines this with the sales growth seen in the sector which will continue at a slower pace, but nevertheless will continue, the stock looks set to appreciate further and is a solid long-term play in the travel sector.