Other observers and I have written about the “September Effect,” which is the history of disappointing returns on US stocks in the month of September. We’ve just come through two of the better months – July and August – with good results, and now September has disappointed so far. Consequently someone is going to remind everyone about the September Effect, and I thought I would be among the first. Will the rest of this month bring more of the same? How about the rest of the year?

The following table gives the details. If we see a repeat of the worst September ever that occurred in 1931, the September 2020 stock market would lose 29.7%, but based on history, we’d expect a 0.7% loss.

The following graphs show some of the key data in the above table. 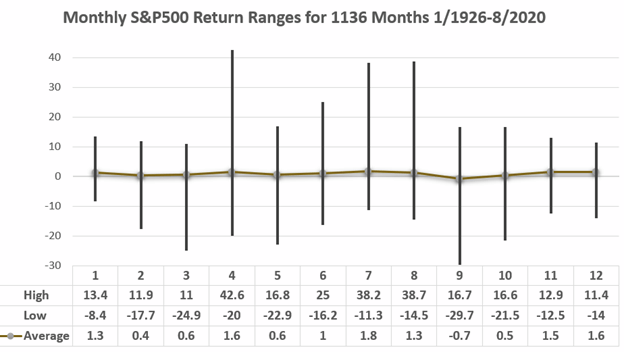 But it’s not just the “September Effect” that threatens stock prices. By most measures, stocks are currently awfully expensive. They were expensive before the pandemic struck and have continued to become even richer despite the pandemic’s economic impacts, leading many to call it a bubble. For example, the following measures of expensiveness are at historic highs.

Price/earnings ratio is one measure for estimating expensiveness. The historically “fair” price for one dollar of earnings has been about $16 – the average P/E ratio is 16. Viewed another way, one hundred dollars of investment have historically bought $6.25 of annual earnings (the reciprocal of the P/E ratio). In the past when P/Es have risen to multiples of the average, stock markets have subsequently crashed. As shown in the following, the US stock market is currently priced 35 times earnings, more than twice the average P/E. One hundred dollars today buy $2.86 of annual earnings. Some argue that this is fair because interest rates are near zero. But if you buy this argument, it means the Fed is manipulating stock prices by manipulating bond prices. 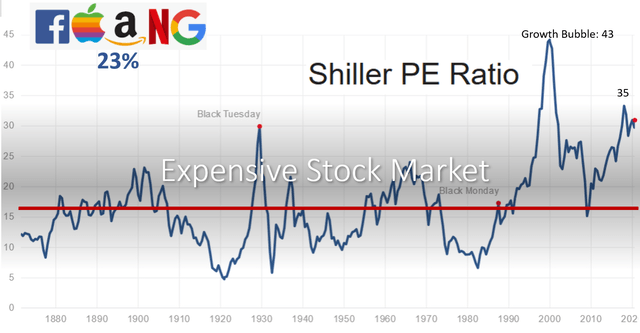 Looking to the far right of the graph, we see that the growth bubble burst in 2000, then recovered only to be slammed by the housing bubble of 2008, and then the 2010s drove up multiples to 35 coming into the decade of the 2020s. Optimists explain that current multiples are justified by the huge success of the FAANG stocks – Facebook (NASDAQ:FB), Apple (NASDAQ:AAPL), Amazon (NASDAQ:AMZN), Netflix (NASDAQ:NFLX), and Google (NASDAQ:GOOG) (NASDAQ:GOOGL). These stocks were thriving in the 2010s and got a big boost recently with the pandemic. They currently comprise 23% of the S&P 500’s total capitalization.

We’re being told that the “valuation system” for these FAANG stocks is the “sky that trees grow to” we had in the 1990s growth bubble. Apple is a prime example, having just reached a market value of $2 trillion. As shown in the following, if Apple were a stock market, it would be the 7th largest market in the world on par with the stock market of Canada. Do you think this a “fair” price? Why? Might this September remedy this pricing?

Warren Buffett has popularized another valuation system. When the value of the US stock market exceeds GDP, it is expensive. This measure has successfully signaled market crashes in the past and is currently at a 180% all-time high. The average ratio is 80%, so we’re currently more than twice average.

The Buffett measure has never been higher. A return back to the 80% norm requires much more than an increase in GDP as the economy recovers.

The “September Effect” is largely folklore/happenstance, but this time it could be reality. What do you see happening?