Specialty retailers have been on fire as a group since the bottom set earlier this year. Home goods retailers, in particular, have driven the sector to a huge amount of outperformance against the broader market as consumers have taken stay-at-home periods as an opportunity to improve their living spaces.

One such example is Williams-Sonoma (WSM), a company with a variety of popular brands that carry home products for a wide range of ages and needs. Shares hit a new all-time high recently at $101, but have since sharply pulled back to $90. I see this correction as a buying opportunity. 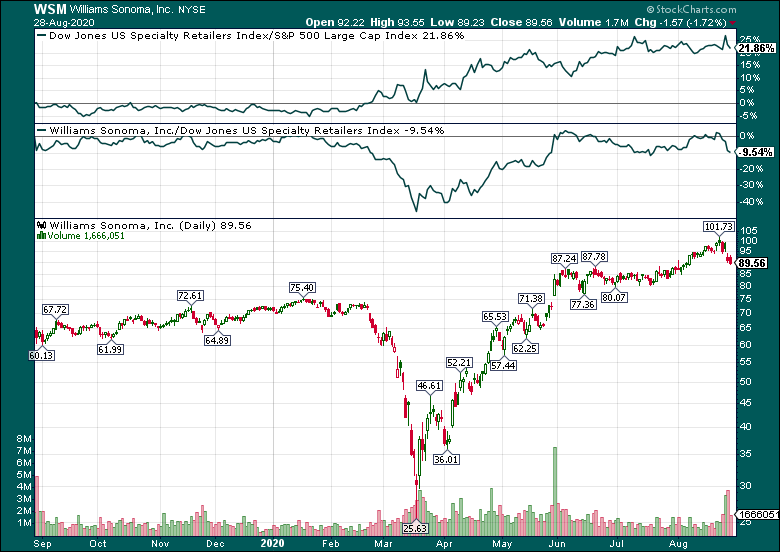 Not only am I bullish on Williams-Sonoma fundamentally, but if we look at the top two panels of this chart, we can see that the specialty retailers have greatly outperformed the market this year, and that Williams-Sonoma has outperformed the benchmark by a huge margin since the March bottom. While that doesn’t guarantee the company will continue to outperform, buying the best stocks in the best sectors is the best way I know of to try and beat the market. Williams-Sonoma, in my view, is one of the best stocks in this sector, and this relative strength is all the more reason I like it as a buy.

Thriving in a COVID-19 world

Williams-Sonoma is none of those things, and indeed, it is thriving in this environment.

This is nothing new to this company, as we can see above. Williams-Sonoma has posted very impressive 6% annual growth in revenues in the past decade, with adjusted EPS growing at 11%, on average, with much of that growth coming in the past couple of years. Part of the difference between revenue and earnings growth is in margin expansion, and part of it is in the 3-4% annual reduction in the float via buybacks that Williams-Sonoma has executed. Together, this lovely cocktail of revenue growth, margin expansion, and share repurchases has produced very meaningful growth.

In addition to that, as we can see at the right of the graphic above, Williams-Sonoma has worked tirelessly to succeed in a digital-first retail environment. Last year, just over half of its first-quarter revenue was digital, but that split was 71/29 in this year’s Q1. Some of that would have been reflective of store closures, but even so, Williams-Sonoma recognized years ago that it needed to focus on the digital experience, and that is paying off enormously today.

In particular, the company’s West Elm brand remains one of the best growth stories in retail, although it is buried inside the conglomerate that is Williams-Sonoma.

We can see that the company still reckons West Elm can double its current revenue rate to become a $3 billion brand, in addition to all of its other brands that are highly successful, such as the Pottery Barn family of brands. In short, Williams-Sonoma is going after the right sort of revenue at the right time, and the company is winning for it.

With the company winning online, there remains a huge opportunity for future growth. This is a hotly contested area of retail, but Williams-Sonoma’s size and scale, as well as its brand recognition, position it well for the fight.

The above stats show that there remains a huge opportunity for Williams-Sonoma to take market share online, leveraging the brand recognition it already possesses for quality and sustainability, while utilizing its robust supply chain to deliver goods through digital channels at scale.

What all of this means is that I believe Williams-Sonoma is a long way from being done growing. Below, we have revenue in millions of dollars, along with EBIT margins, which is one way of defining operating earnings. 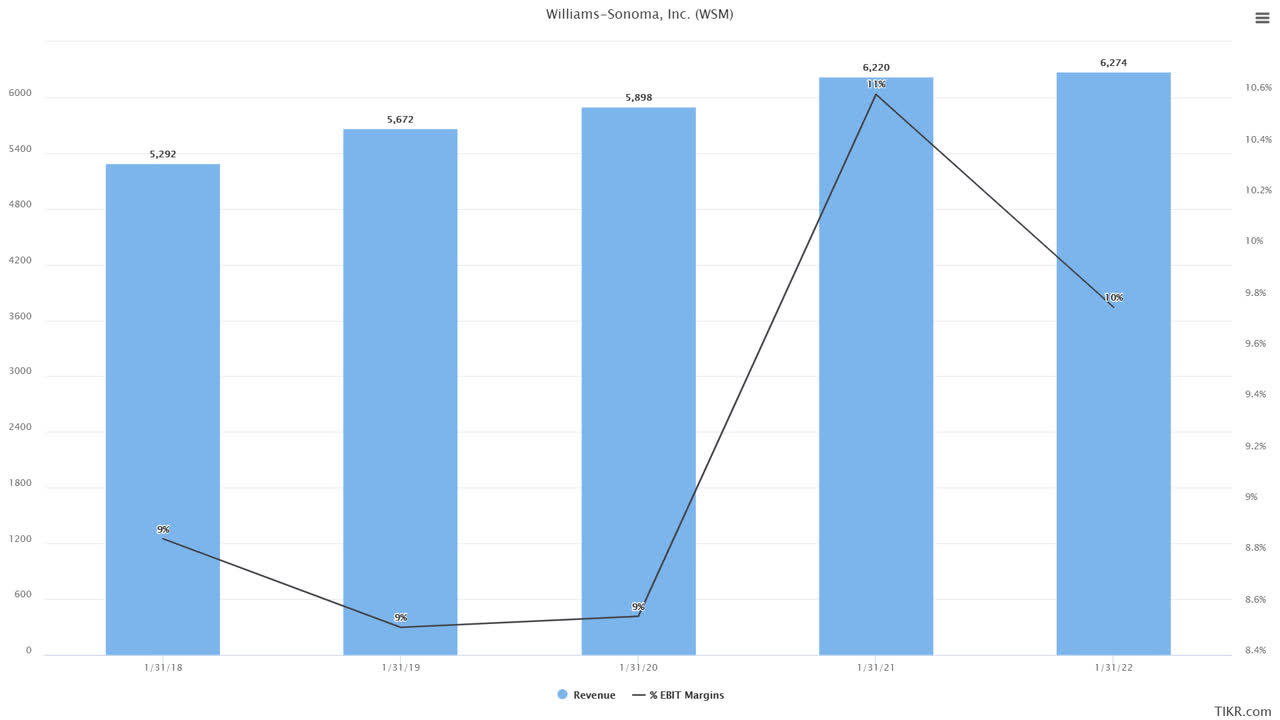 We can see that recent revenue growth is slated to continue this year, as well as into next year to a certain extent. However, operating earnings are expected to peak in fiscal 2021, followed by a decline into next year, which I don’t quite understand.

I agree that at least some revenue is likely to be pulled forward from next year into this year, which explains the below-trend growth in the top line for next year. However, assuming the sizable drop in operating earnings next year when revenue should be moving higher still seems highly pessimistic. After all, Williams-Sonoma is gaining margin leverage this year, primarily due to increased revenue driving fixed costs down. With revenue moving slightly higher next year, why would margins suddenly decrease? That doesn’t make any sense and, therefore, provides an opportunity for getting long Williams-Sonoma with reduced expectations.

The other thing I really like about the company is its free cash flow generation, which has led to a pristine balance sheet. Below, we’ve got free cash flow and net debt, both in millions of dollars, for recent years, as well as estimates for this year and the next. 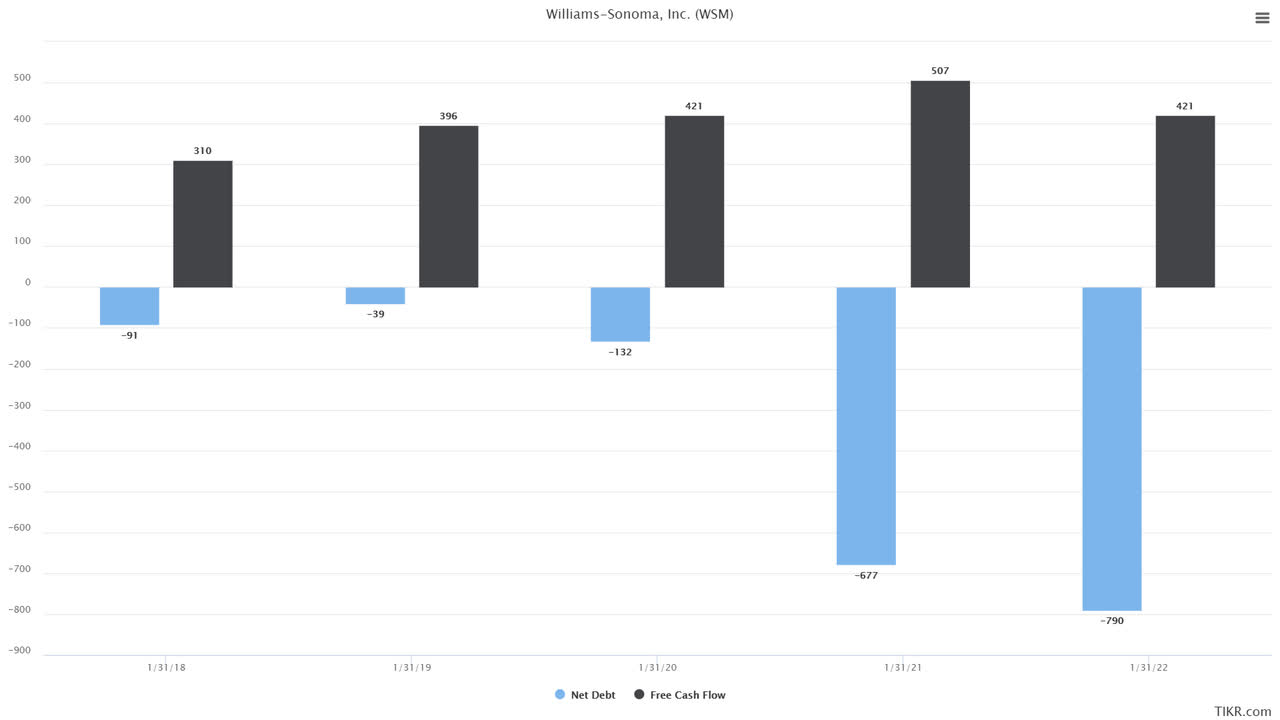 Williams-Sonoma generally produces around $400 million in FCF annually, but that should be higher this year thanks to accelerated earnings growth. Into next year, expectations are lower but again, I’m not entirely sure why. At any rate, the company’s net debt has been negative for some time, and that position should only improve this year and next. Depending upon how much stock Williams-Sonoma buys back and what it does with the dividend, we could see these numbers move up or down. But the point is that the company has supreme flexibility when it comes to the balance sheet, thanks to years and years of strong FCF generation.

I won’t reiterate once again why I think expectations for next year are too low, because I’ve done that already. I’ll just note that, as you can see, expectations for EPS follow suit with margins that we saw above, and the analyst community currently expects a decline in earnings next year.

I don’t get it, but at any rate, shares trade for 15 times the $5.84 that is currently expected for next year and 14 times estimates for this year. These are right in line with historical valuations for Williams-Sonoma, but what this is missing is that the pandemic has accelerated the company’s growth due to its focus on digital channels. In other words, for all the reasons I laid out above, I believe Williams-Sonoma’s long-term growth prospects have improved as a result of the pandemic, but it continues to trade for the same multiple it did before the crisis.

This, along with low expectations into next year, create a pretty bullish outlook for the stock as far as I’m concerned. Given these factors, I think Williams-Sonoma is a Strong Buy.

Disclosure: I/we have no positions in any stocks mentioned, but may initiate a long position in WSM over the next 72 hours. I wrote this article myself, and it expresses my own opinions. I am not receiving compensation for it (other than from Seeking Alpha). I have no business relationship with any company whose stock is mentioned in this article.