The play field of SPACs has been quickly changing and evolving so far this year with a robust IPO pipeline, larger trust accounts and more “celebrity/influencer” sponsors. The number of newly listed SPAC so far this year has already surpassed that of entire 2019. However, the oversupply and fatigue of deal announcement might lead to diminishing expected return of the SPAC warrants going forward – it will be hard to identify opportunities with 5x return nowadays unless the market suffers another crash as severe as last March. The new normal for SPAC warrants will most likely be 2x-3x return for solid names and well-received merge targets or investment themes assuming the investors sell the warrants at the deal announcement and do not take the fundamental risk of the target companies.

This new return range seemed to be confirmed by the most recent deal announcements from Hennessy Capital Acquisition Corp. IV (HCAC) and Trine Acquisition Corp. (TRNE). In the last writeup of Warrant Relative Value Updates, both companies’ warrants were identified as the potential opportunities, and as expected, they both made official deal announcements. However, market reactions were different. HCAC announced on August 18th that it would merge with electric vehicle company Canoo for a pro forma valuation of $1.8 billion. The warrant price reaction was muted (see chart below), reflecting a likely fatigue of the already crowded EV themed deals. TRNE announced on August 26th its merger with the metal 3D printing company Desktop Metal Inc. for approximately $2.5 billion. TRNE warrant price jumped 2.5x from $0.95 to $2.50. 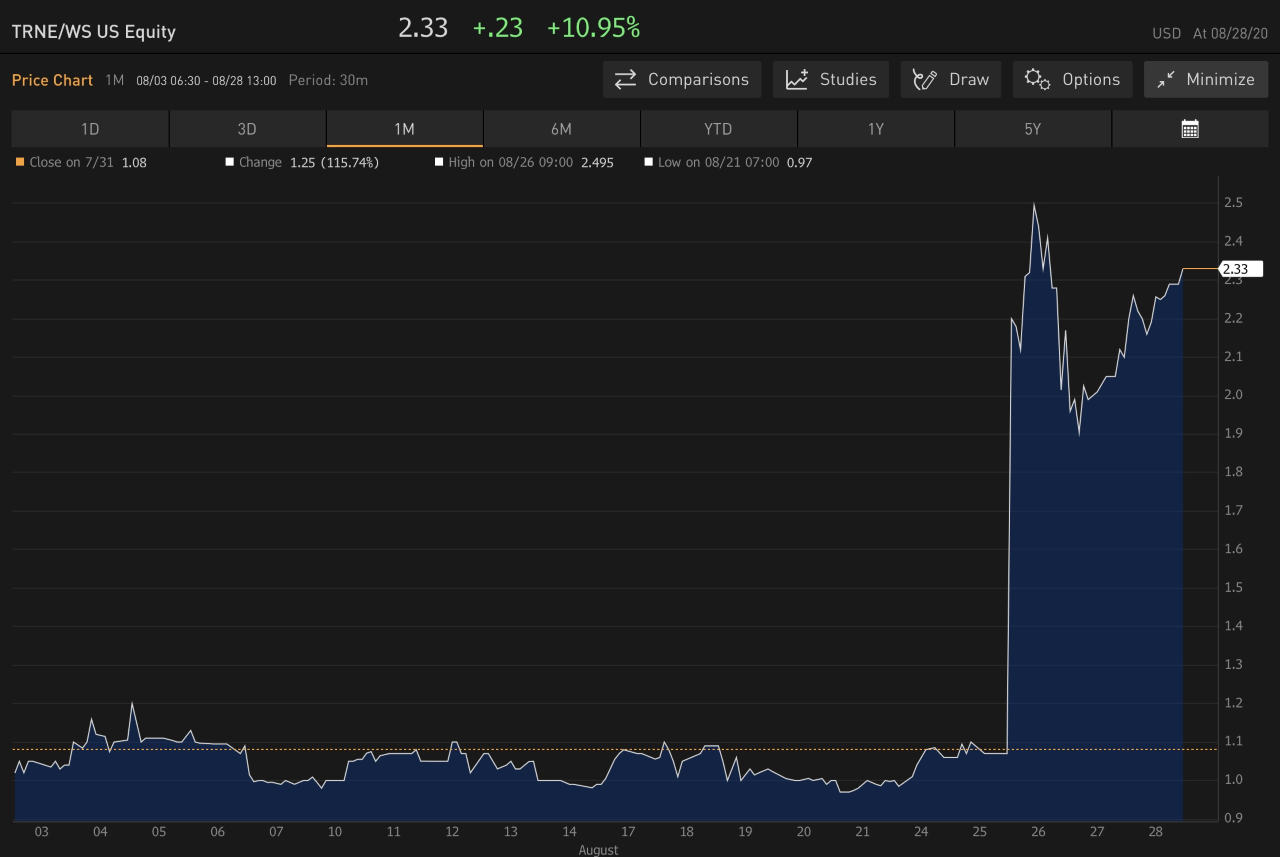 The warrant relative value chart currently only includes the SPACs that have the liquidation deadlines before April 30, 2021. Several of SPACs in this coverage universe made official deal announcements during the course of August, which further reduced the number of pre-deal SPACs on the relative value chart and left even fewer investment opportunities.

After the initial selloff in August, the prices of pre-deal SPAC warrants in general stabilized, with most of them trading below $1 per share. However, after filtered by liquidation deadline, trust account size, management profile and targeted industries, only cannabis SPACs and Acamar Partners Acquisition Corp. (ACAMU) stand out with reasonably decent risk-reward profiles. 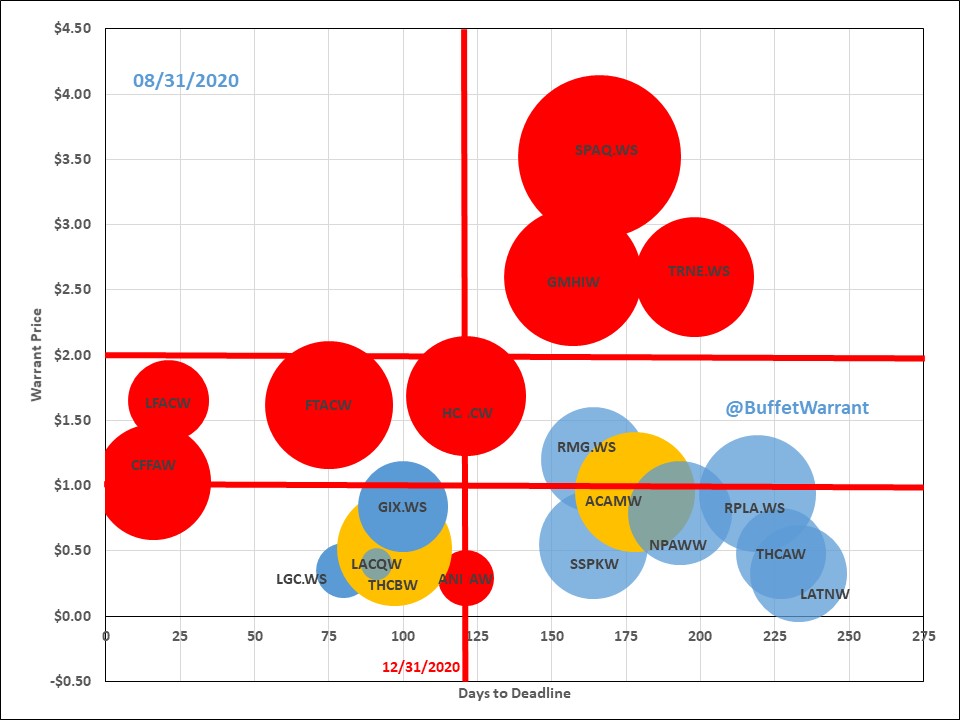 Notes: Red = SPACs with announced deals; Yellow = SPACs with good risk-reward profiles; Blue & Green = SPACs that have less than $300 million in the trust account and are still searching targets; Warrant price is as of August 31, 2020 and trust account amount is as of June 30, 2020.

There are three cannabis-focused SPACs in the Warrant Relative Value chart: Tuscan Holdings Corp. (THCBU), Silver Spike Acquisition Corp. (SSPKU) and Tuscan Holdings Corp. II (THCAU). As a group, they have consistently traded at a very low price range, primarily due to the regulatory and legalization overhang. The near-term catalyst for these SPACs to shine is the Presidential Election in November, as the newly elected President will have to address the budget shortfall. Per an article on Barron’s, the states, cities and towns in the US are collectively facing budget shortfalls of approximately $1 trillion through 2022. Both cannabis and sports betting, once fully legalized, would be two much-needed sources of revenues for these cash-strapped governments.

Among the three cannabis SPACs, the THCB warrant (THCBW) is more of a low-hanging fruit because its liquidation deadline is the earliest on December 7, 2020, and, more importantly, among all the SPACS that have liquidation deadlines before year-end, THCB is the only one with larger than $200 million in the trust account. Since THCBW was identified as an opportunity in the last writeup of Warrant Relative Value Updates early August, it has rallied more than 32% over the month from a very low base, while the cannabis-themed ETF, ETFMG Alternative Harvest ETF (MJ), was down 3% during the same period. Despite the rally, it is still a name with favorable risk-reward profile and could potentially generate significant return upon a deal announcement over the next three months. 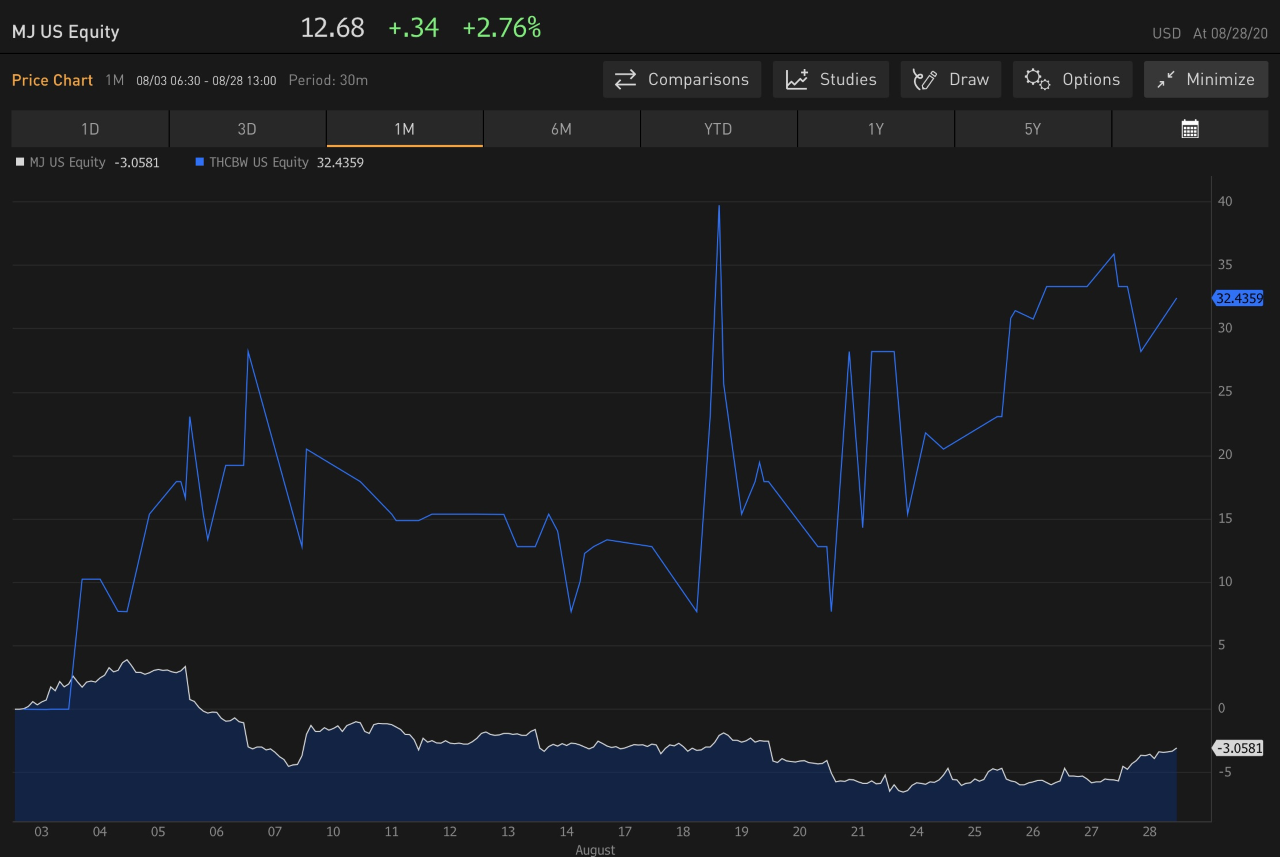 Relative to other SPACs with a trust account larger than $300 million, ACAMU warrant (ACAMW) is cheap by a wide margin (see table below). Also, ACAMU has the earliest liquidation deadline among the comparables. Actually, it is the only SPAC that has both more than $300 million in trust account and a liquidation deadline before April 30, 2021. If using Trine Acquisition Corp., Graf Industrial Corp. (GRAF), Spartan Energy Acquisition Corp. (SPAQ) and DiamondPeak Holdings Corp. (DPHC) warrants as price reference for the deal announcement “pop”, ACAMW could potentially have 2x-3x upside upon a deal news, while the downside could be 45 cents in a general market selloff, or zero in case of a liquidation for not completing the business combination. 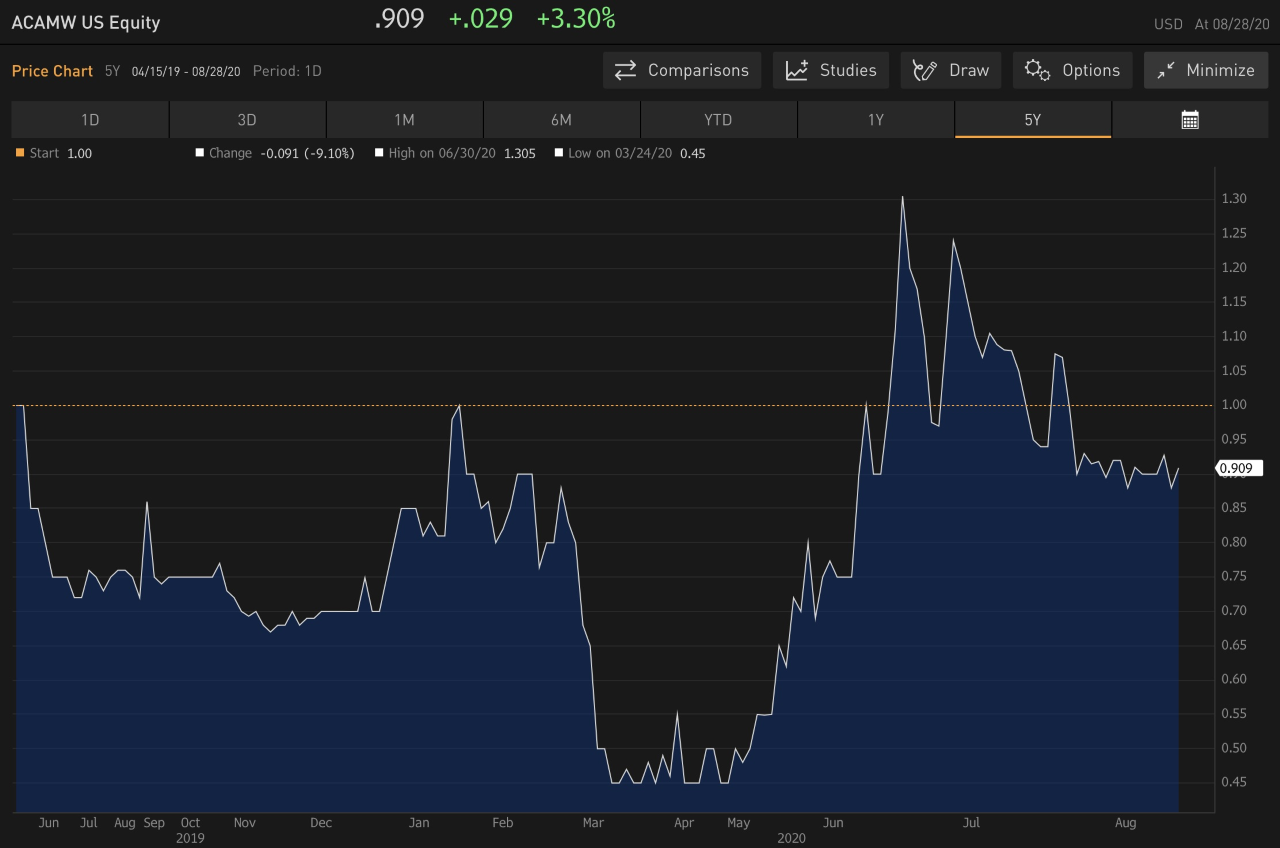 The price of SPAC warrants is driven primarily by three factors, i.e., management profile, size of the trust account and the targeted industry. Among the three, management caliber is the most important factor. All the SPACs in the comparable table above have “celebrity” sponsor teams. It is worth noting that ACAMU also has a very solid management team and Board, which is unfortunately overlooked by the market.

ACAMU’s Chairman Juan Carlos Torres, CEO Luis Solorzano and COO Juan Duarte used to work together at the same private equity firm, Advent International, for 27, 19 and 17 years, respectively. Advent International is one of the largest and most experienced global private equity firms with 15 offices in 12 countries and over $50 billion in assets under management. Juan Carlos Torres joined Advent International in 1988 and worked in the US, Europe and Latin America. During his tenure there, he helped raised 5 funds for over $4 billion and acquired controlling interests in over 30 companies. He has also served on the boards of many private and public companies and is currently board member and Executive Chairman of Dufry AG, one of the largest travel retailers in the world.

ACAMU’s President, Raffaele R. Vitale, has also been in private equity for 17 years and current is also a Partner at PAI Partners. PAI was originally the principal investment arm of Paribas and currently has over $16 billion in assets under management. This management team is certainly very strong in terms of deal-making, operations and industry connections.

ACAMU’s three-member board is equally impressive. Domenico De Sole is currently Co-Founder and Chairman of Tom Ford International, and previously, he also served as President and CEO of Gucci Group as well as Chairman of Sotheby’s. Jim Skinner served as COO and CFO of Neiman Marcus Group for 15 years and currently is on the board of Hudson Ltd. and Ares Commercial Real Estate Corporation. Tech Wong was a former Managing Director of Blackstone Alternative Asset Management.

ACAMU is targeting at retail and consumer industries for a potential acquisition in both the US and Europe. These industries currently present ample opportunities as they are trying to envision and adapt themselves to a post-pandemic new normal. ACAMU’s sponsor team should have exactly the insight and connections to navigate through the industry uncertainties and identify a target with well-received investment thesis.

With multiple deal announcements in August, there are only very few low-hanging fruit among the pre-deal SPACs that have the liquidation deadline before April 30, 2021. On the Warrant Relative Value chart, two names stand out: Tuscan Holdings Corp. and Acamar Partners Acquisition Corp. Both could potentially have 2x-3x upsides upon deal announcements, while the downside is zero in case of a SPAC liquidation.

Disclosure: I am/we are long ACAMW, THCBW. I wrote this article myself, and it expresses my own opinions. I am not receiving compensation for it (other than from Seeking Alpha). I have no business relationship with any company whose stock is mentioned in this article.