As you can see in the following chart, the iPath S&P 500 VIX Short-Term Futures ETN (

It is my belief that VXX is likely headed higher in the next 1-3 months due to market-related factors. However, I maintain my long-term bearish bias on the ETN.

To start this analysis off, I’d like to zero in on some recent trading activity in the S&P 500. Specifically, I am examining the fact that the S&P 500 has continued to hit fresh 1-month highs over the past week. 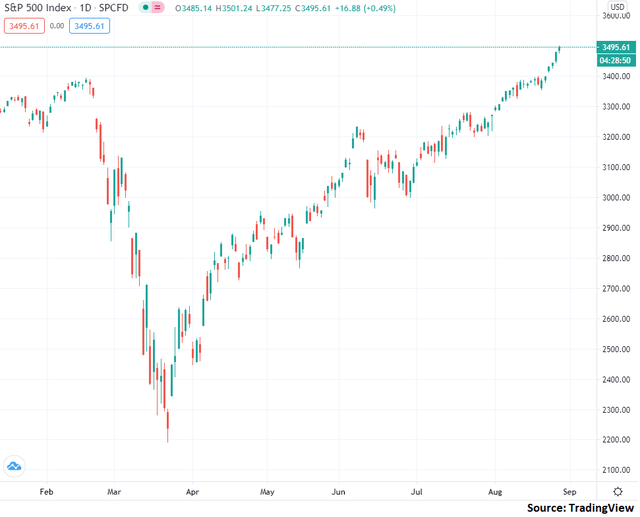 While these returns have been excellent for equity investors, I believe that now is a very important time to study the statistical tendencies of new highs in the S&P 500 and how it relates to the VIX. Specifically, as you can see in the following chart, when the S&P 500 hits a fresh 1-month high (as it has done for basically a week straight), the odds of future upside in the VIX climb. 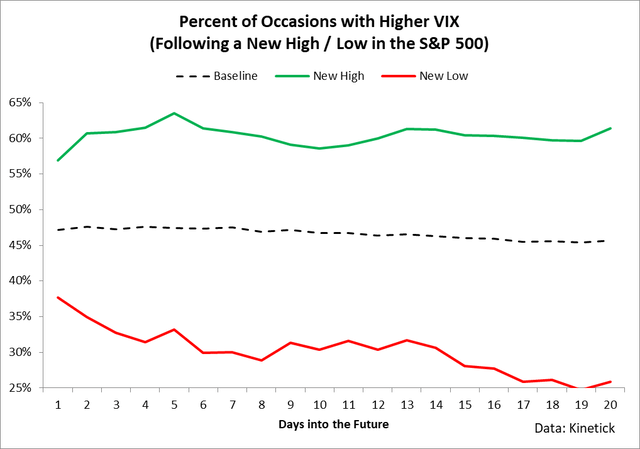 What this data shows is that when the S&P 500 hits new highs, rallies in the VIX tend to follow. What this essentially highlights is the mean-reverting nature of markets: when the market rallies, it tends to weaken somewhat on a relative basis in the future, and weakness in the market is associated with a rising VIX. So, based on the broad statistical tendencies seen over the past 27 years of market data, there’s probably about a 60-65% chance that the VIX will rally over the next month.

Earlier this week, we witnessed the VIX flirt with fresh 1-month lows. 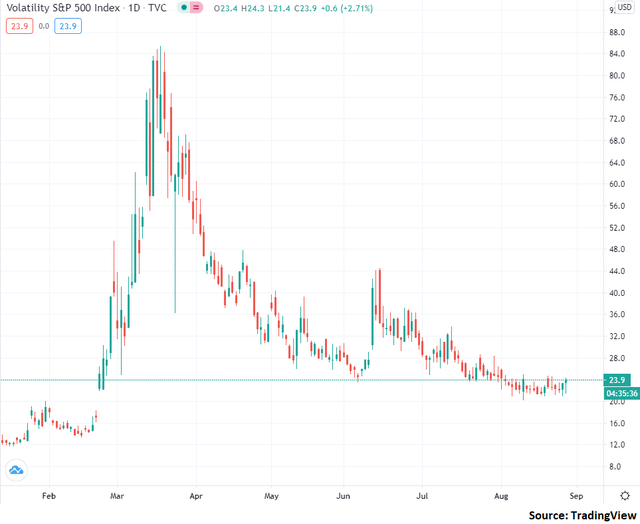 Similar to the statistics seen following new highs in the S&P 500, when the VIX hits new lows, rallies in the VIX tend to be seen. 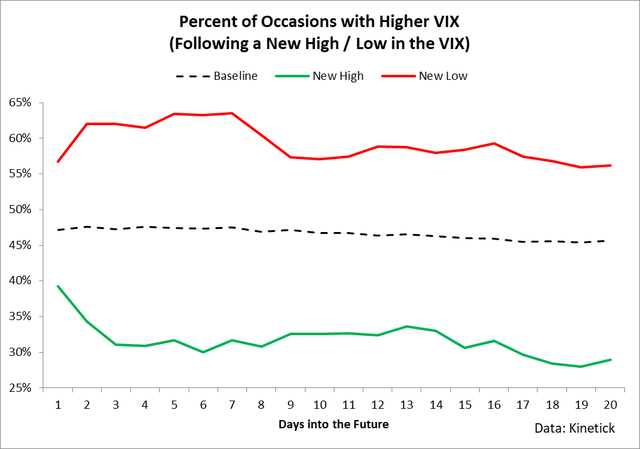 This chart shows a similar picture to our prior study in that each is indicating that there’s about a 60-65% chance that the VIX will rally over the next month based on broad tendencies seen over nearly 3 decades.

However, I am also moderately bullish the VIX in the short term based on the clear seasonal tendencies in the index. For example, between September and October, the VIX has on average increased by 7% since 1992. 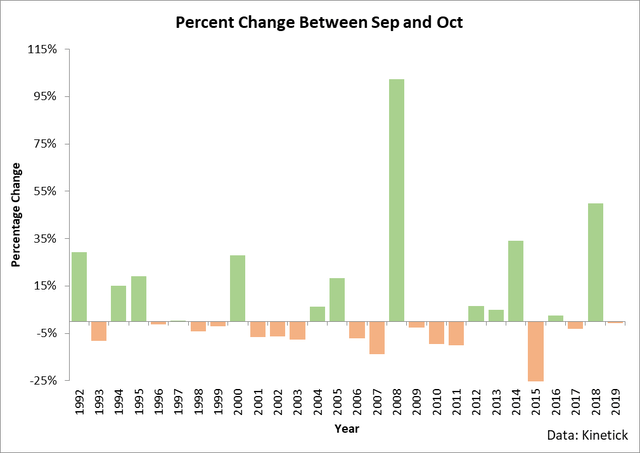 In fact, history indicates that if we are going to see a rally in the VIX between September and October, then on average, this rally will be in the territory of 24%. This is important to note in that it shows that we are currently entering a time period in which volatility tends to strengthen with a decent degree of reliability. As you can see in the following chart, there are very clear seasonal tendencies which are indicative of an increase in the VIX between now and the end of the year. 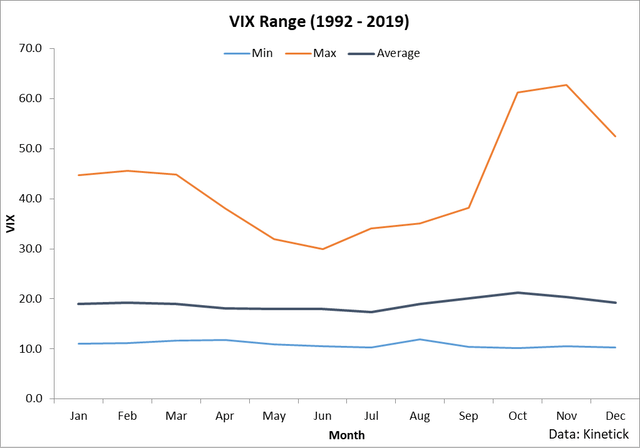 An additional factor to remember is that this is an election year – and election years generally do see volatility increase between the summer and fall months. 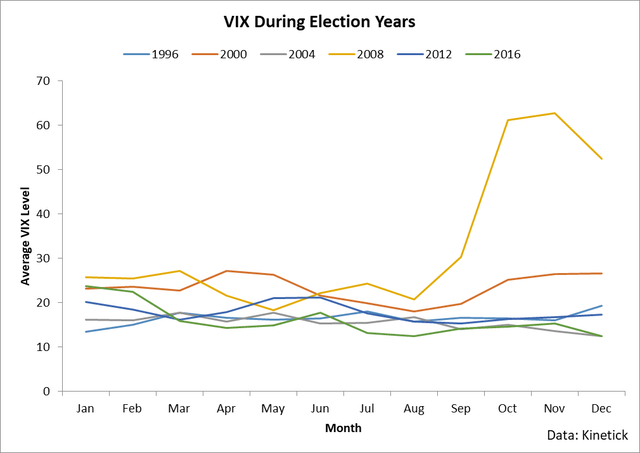 The above data shows that of the past 6 election cycles, four witnessed volatility increase between September and December. In other words, historical data suggests that we’ll probably see further upside in the VIX over the next few months.

Put simply, I believe the statistics and data strongly suggest that we’re in for a rally in the VIX over the next 1-3 months. Statistical tendencies surrounding highs/lows in the market as well as VIX movements indicate upside. Also, seasonal factors lend credence to the VIX bull theme. However, we’ve got a very big problem when we trade VXX: it is only correlated with changes in the VIX over the shortest of time periods. Let’s discuss this in the next section.

VXX is an ETN which is tracking the S&P 500 VIX Short-Term Futures Index. As you can see here, this index has declined at an annualized rate of about 50% per year for the past decade. We’ll talk about why this is the case in a bit, but before that, it’s important for traders to understand that an investment in VXX is not the same as an investment in the VIX. For example, here is the difference in performance between VXX’s index and the actual VIX grouped by holding period. 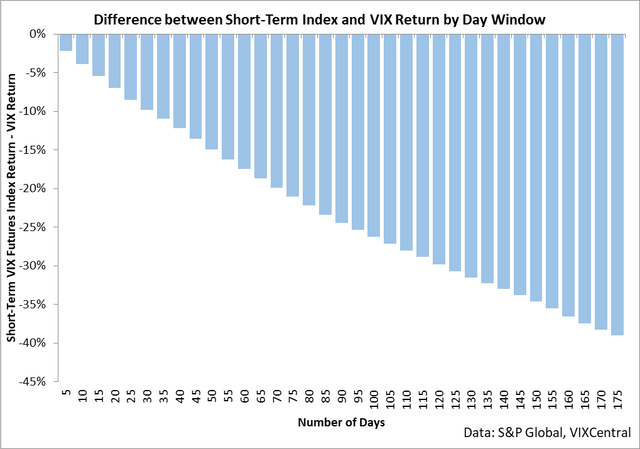 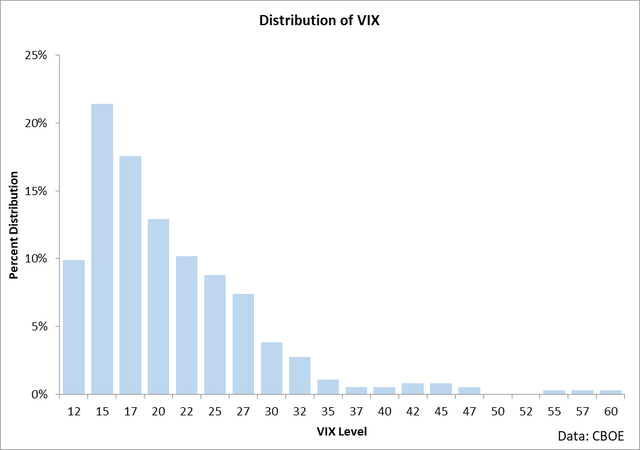 The reason why this is the case is due to futures convergence. VXX is tracking the first- and second-month VIX futures contracts, and these contracts are priced above the spot level of the VIX 85% of the time or so. Futures convergence means that through time, you will be losing money holding futures contracts in contango because they are priced above spot and these contracts decline in value to approach the spot value heading into expiry. As you can see in our first link in this section, this impacts VXX to the tune of about 50% per year in losses.

Put simply, trading VXX to the upside is a gamble with a very large dealer advantage. Yes, the odds may suggest that the VIX is going to increase over the next 1-3 months, but the data clearly shows that futures convergence remains a strong drag on shares of VXX and the ETN is liable to drop through time.

This is why I’m short VXX: to capture this 50% drop per year. I am short using puts, and I am actually planning to add to my puts when the VIX rallies. So, yes, I’m short-term bullish the VIX, but I’ll be using this rally to add to my long-dated VXX puts. I believe this is the best way to trade the long-run futures convergence issues associated with this ETN.

Short-term statistical studies suggest that the VIX will rally over the next 1-3 months. Despite the fact that the VIX is likely to rally, VXX itself will almost certainly not rise to the same extent. Given the long-run structural issues at work in VXX’s methodology, long-dated shorts are the best plays.

Disclosure: I am/we are short VXX. I wrote this article myself, and it expresses my own opinions. I am not receiving compensation for it (other than from Seeking Alpha). I have no business relationship with any company whose stock is mentioned in this article.