As you can see in the following chart, it’s been a difficult few months for the volatility bulls trading the iPath S&P 500 VIX Short-Term Futures ETN (NYSEARCA:

It is my belief that this trend of losses is set to continue. Specifically, while I believe that we are in for a short-term correction in the S&P 500 (and therefore a rally in the VIX), my ultimate view is that in the long run, shorting VXX makes for a solid play.

Let’s start this piece off with a dive into the probabilities surrounding the recent VIX movements. The VIX is a very interesting instrument in that it is highly mean-reverting – that is, when the VIX rallies over a certain time period, it tends to proceed to fall in the future. And the converse is true in which selloffs in the VIX tend to be followed by gains.

As an example of this point, here is a chart which shows the historic probability of the VIX being higher a certain number of days into the future following the index hitting a fresh one-month high or one-month low. 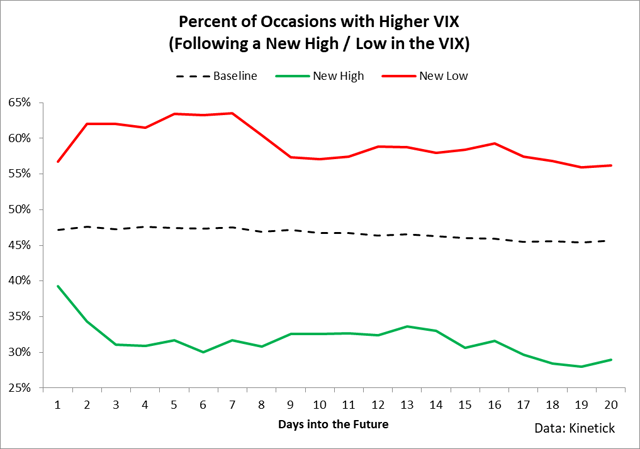 The odds are fairly clear and conclusive – when the VIX hits a fresh high or low, it tends to reverse that movement over the next month. For example, given that the VIX has crashed into new lows in today’s trading, the last 27 years of market data would suggest that there’s about a 65% chance that the VIX will be higher 1-2 weeks from now tapering off to about a 55% chance that it’ll be higher one-month from now.

The VIX itself is a calculation from implied volatility on the S&P 500 and it tends to be fairly inversely-correlated to changes in the market. 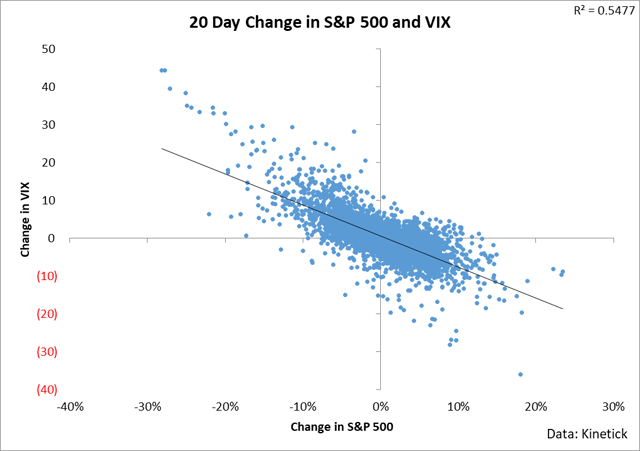 For example, in the above chart, there is a very clear relationship between the market and the VIX – when the market increases over a month, the VIX tends to decrease over that same month.

However, there’s an interesting trend at work in the S&P 500 as well: performance tends to mean-revert. This mean reversion can be captured in the data when we examine what happens to the VIX after the S&P 500 hits a fresh one-month high or low. 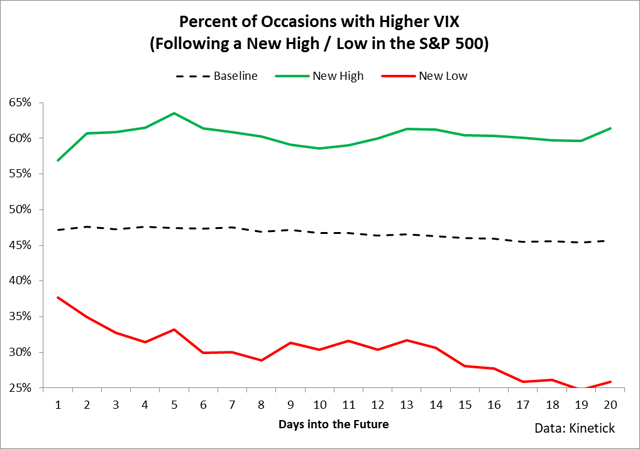 This chart shows what has historically happened to the VIX after the S&P 500 hits a one-month high or low. Given that we are currently pushing hard into the territory of new one-month highs, the data would suggest that there’s about a 60% chance that the VIX will be higher over the next month.

If you’ve been following my articles for some time, then you’re likely aware that I haven’t used this type of analysis to generate a bullish recommendation on the VIX for some time. The reason for this is that I believe that the statistics need to be properly framed in terms of historic market action. For example, over the past few months, we have seen exceptional upside volatility in which the VIX has crashed to multi-year highs. For this reason, I have relied on studies like the following to generate recommendations. 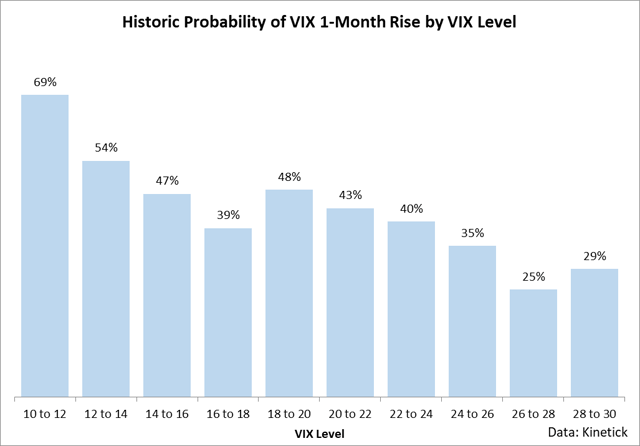 This chart shows the historic probability that the VIX will be higher one-month into the future given its outright level at the time of observation. At any given point, this is my general compass or benchmark telling me where the probabilities lie.

However, if you notice, there is a very clear relationship at work in the data with the strongest correlations seen at the extremes. Given that we are currently sitting around 25 on the VIX, the odds would suggest that there’s about a 65% chance that we’ll see the VIX drop over the next month. However, I believe that since we are moving closer to the median value of the VIX (around 15-20), I am putting less weight into this specific form of analysis. Specifically, I believe that because we are rapidly approaching a median long-term value on the VIX, we can table this specific chart and look at other short-term mean-reversion metrics like the prior studies to inform our analysis.

On this basis – recent highs in the S&P 500 and the VIX hitting new multi-week lows – I am actually short-term bullish VXX. I believe that there’s a decent chance (65%) that we will see the VIX rally over the next month which will benefit volatility bulls. However, this is as far as I can go in terms of bullishness for VXX. I am structurally bearish VXX and believe that the best and most reliable money is made shorting the note (through options) for long-term plays.

It is my belief that VXX is a superior instrument to short for long-term players. I have personally made good returns through put spreads on the ETN and will continue to scale into puts as the VXX rallies. In other words, if we really do see the VIX rally (as mentioned in the previous section), I am actually going to be using it to layer into additional put-spreads on the note with a target holding time of a year or longer.

Before getting into the weeds though of why I would do this, here is a long-term performance chart of VXX. 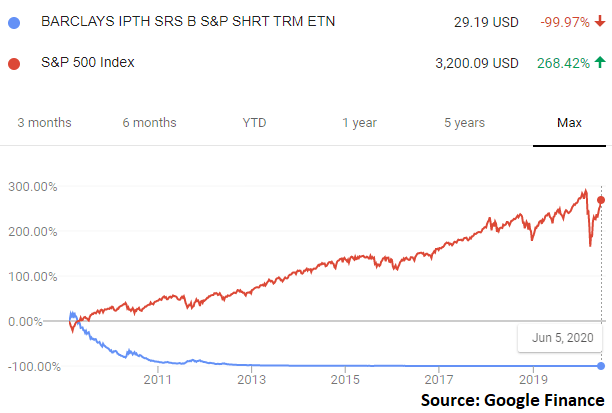 Let’s say I covered up the name of VXX above and just showed you the performance chart: would you ever actually consider buying this product based on its long-run return? I wouldn’t. In fact, if all I saw was the above chart and was forced to make a decision as to buy or sell the instrument, I would look to short because there is something structurally at work which is systematically destroying returns.

At present, there is over $700 million invested in VXX. A few months ago, this figure was around $1 billion. It’s hard to say if investors have taken capital from the instrument or if the losses are attributed to the collapse in VXX’s shares. However, etf.com highlights the long-term destruction witnessed in its description of VXX:

I have covered this in depth before, so I’ll briefly describe why I’m short VXX and why I continue to look for shorting opportunities in the note. I feel a burden to at minimum mention this every time I write about VXX because even after I have covered volatility products for about a year, I still receive comments and message from users asking for more clarity around the concept of roll yield. This is understandable in that roll yield is both simple and remarkably complex.

Put simply, the reason why VXX continues to drop almost all of the time is that it is holding VIX futures and VIX futures are almost always in contango (priced higher than the spot price). VXX is following the S&P 500 VIX Short-Term Futures Index and this index basically has VXX holding the front two VIX futures contracts in perpetuity.

If markets were perfectly static, this wouldn’t be an issue. However, as a month progresses and a futures contract near its expiry date, the difference between the spot price and the futures price converges to basically be zero at the time of expiry (because in most markets, the futures contract actually becomes the spot commodity shortly after expiry).

That’s the problem of roll yield in a nutshell and precisely why VXX continues to drop.

If you understand this, then you understand why I am short and I am looking to add to my short. Specifically, I am planning on utilizing the next move upwards in the VIX to position myself with put spreads with an expiry of around one year into the future.

My preferred play is to buy the first put a little out of the money and then sell a put several strikes lower. Historic analysis shows that VXX declines at a rate of around 50% per year, and I try and have my second strike be somewhere between this average and the current price. My reasoning is that I am looking for the averages to play out over the next year, but I give myself some wiggle room by increasing the strike to be somewhat closer to the spot price of the ETP.

The reason why I prefer put spreads instead of outright puts is that you can strip out a good degree of the implied volatility through the spread. Options tend to increase in value when volatility increases and VXX already has a good degree of skew built into the curve – trading put spreads allows me to remove much of the added volatility premium and adding to positions during spikes in the VIX can mitigate the skew.

All this said, I am short-term bullish VXX, but I am using this as a shorting point to allow me to exploit the structural mechanics of the index upon which VXX is built.

The odds favor a bounce in VXX over the next month due to both movements in the S&P 500 and the VIX itself. VXX has historically dropped at an annualized rate of about 50% per year, which means that rallies in the ETP represent great shorting opportunities. As the VIX pops, I will be looking to increase my VXX short position.

Disclosure: I am/we are short VXX. I wrote this article myself, and it expresses my own opinions. I am not receiving compensation for it (other than from Seeking Alpha). I have no business relationship with any company whose stock is mentioned in this article.