One of the top-performing assets over the past few weeks has been silver and silver miners. The precious metals complex as a whole has had a strong performance, but silver’s breakout has been nothing short of spectacular. A few months ago, the metal was worth under $12/oz. Today, it is worth nearly $23/oz, essentially doubling in value in only five months.

Unlike many rallies in the market today, silver is driven by fundamentals. Despite the economic slowdown, inflation expectations have actually been on the rise due to aggressive monetary policy (and production shortages). The U.S. dollar is declining in value, and U.S. real interest rates are hitting record negative levels. Indeed, this is a Goldilocks environment for silver and gold.

The silver ETF (SLV) and the silver mining ETF (SIL) have seen very strong inflows over the past few weeks. While silver may look as if it’s expensive, it is still over 50% below its long-term peak of $49.50 set in 2011. This makes the metal relatively cheap compared to gold, which is just below its all-time high. If gold makes new highs, it is possible silver will eventually surpass its past peak, likely bringing silver miners up by triple digits.

This is quite clear if we look at the two funds from a long-term perspective, illustrating how far they remain below their previous peaks:

Additionally, silver’s fundamentals today are perhaps even stronger than they were during the 2011 peak. In general, lower inflation-indexed (i.e., “real”) yields bring gold and silver higher. This rate is shown second in the chart below and actually recently hit a new all-time low. Even more, the market’s inflation expectation discount rate (third chart) has actually held its ground despite the slowdown, which implies inflation is actually quite strong. Finally, the U.S. dollar is at a high, which has suppressed gold and silver prices, however, it is showing signs of an impending bear market:

Overall, this gives us a strong bullish fundamental outlook for both silver and gold. Put simply, cash is showing significant signs of weakness, since savers are losing money by holding it (after inflation) and too much is being created from the Federal Reserve. In my opinion, the most likely result will be a new all-time high in both silver and gold. This gives silver more overall upside potential today.

I prefer silver to gold primarily due to its relative undervaluation. While silver has outperformed in the past few weeks, the silver/gold ratio is still at an extreme long-term low. As you can see below, silver seems to have made its long-term bottom, which implies the outperformance may last:

Without further ado, let’s take a look at what I believe are the nine best silver mining stocks that offer a diversified and opportunistic silver miner portfolio.

Mining stocks offer leverage to the underlying commodity. In general, a mining stock moves 2X as much as the commodity it mines. That said, there is a tremendous variance from company to company based on production costs, development, exploration, and financing. While silver miner ETFs like SIL and the small-cap (SILJ) offer decent opportunity, I’m willing to bet returns can be even stronger with a basket of solid individual names.

Most importantly, we must filter at those companies with poor financing and those stuck in a hopeless exploratory phase, since their earnings may not be improved with silver’s rally. Additionally, we want to find stocks that have the highest probability of being bought out. Specifically, those which are in the process of increasing production.

I separate these miners into three categories. Core, which are larger miners which are likely to generate more stable cash flow with a focus on low production costs, Opportunistic, which are those in the middle range which have more upside potential as they increase production, and Exploratory, which are smaller miners with high potential buyout gains from proven exploration. In general, the core portfolio is focused on gold & silver miners which have large silver operations, while exploration and opportunistic are focused exclusively on silver.

I firmly believe these nine mining stocks are likely to deliver alpha to silver mining ETFs. These companies are all different in many ways, but all have diligent and aggressive management teams that I believe will give them an edge going forward. Some have very low valuations on an earnings basis, and all have strong reserves (proven or probable) that indicate high production growth in years to come.

A Look at Performance

I picked all of these companies based on fundamentals, however, performance is also important. Personally, I want to own stocks that are either outperforming or have recently underperformed, in order to take advantage of both momentum and value. I believe the key is avoiding the middle-range companies that are simply moving with the pack.

These nine stocks certainly fit the bill with a strong performance of late. Here are the YTD and one-year performances of each stock:

This can also be seen by comparing this portfolio’s performance to that of SIL and SILJ, as you can see below: 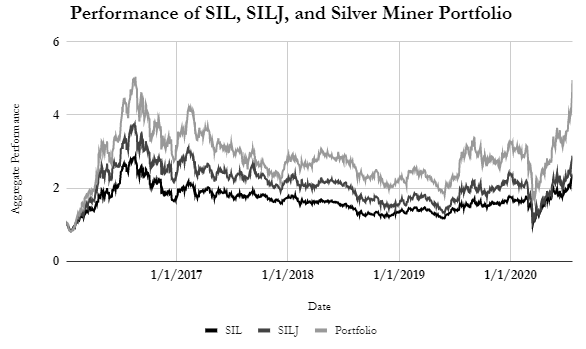 Note, the portfolio’s performance is calculated using equal weighting with a daily rebalance in order to maintain accuracy. While past performance is not necessarily indicative of future performance, we can clearly see the ongoing breakout for these miners is extremely strong. It may seem too strong, but these are companies set to gain the most in cash flow from a breakout in silver. Additionally, almost all are still far below their 2011 peak if they were trading then.

We can also visualize the outperformance of this portfolio by taking a ratio of it to the price of SIL and SILJ. An increase in this ratio indicates outperformance, and vice versa. As you can see below, the general trend in both has been toward consistent outperformance. This is particularly true over the past few months: 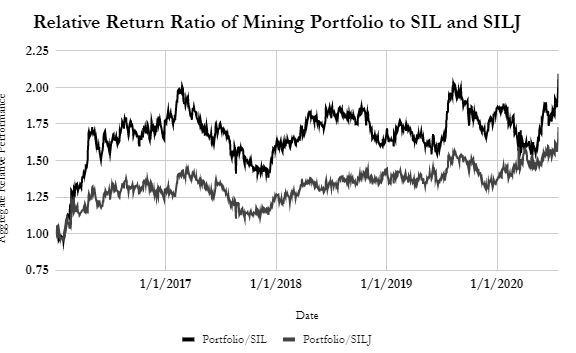 Again, outperformance today does not necessarily imply outperformance tomorrow. Indeed, some of the equities in this basket have actually underperformed this year. However, momentum investing is a time-tested approach that has been known to outperform. By combining momentum with strong fundamentals in a strong economic environment for silver, I believe we can target achieve strong returns.

The situation in silver today is far different than it was months ago when I wrote “SLV: Deflation Will Be Temporary, Silver Is Eternal.” Back then, the silver market was in despair, as silver was at a level where many miners could not make a profit. Indeed, this was a major reason why I began loading up on precious metals and miners.

Today, just months later, the opposite seems to be true. Deflation did not last, and the surprisingly high inflation rate has catalyzed a breakout in precious metals and a possible devaluation of the dollar. As I said earlier, the long-term fundamentals today for silver (and gold) is much stronger than it was at the peak in 2011, despite silver trading at a significant discount today (to its 2011 prices).

Now, this is not to say the market is without risks. As I wrote about last week, there are some possible short-term speed bumps in the market that could cause a pullback. Personally, I’ll be waiting for a pullback (even if slight) before I buy additional silver miners. That said, I firmly believe these nine silver mining stocks are going to offer the best long-run performance.

If you’re looking for (much) more research, I run the Core-Satellite Dossier here on Seeking Alpha. The marketplace service provides an array of in-depth portfolios as well as weekly commodity and economic research reports. Additionally, we provide actionable investment and trade ideas designed to give you an edge on the crowd.

As an added benefit, we’re allowing each new member one exclusive pick where they can have us provide in-depth research on any company or ETF they’d like. You can learn about what we can do for you here.

Disclosure: I am/we are long SVM, EXK, FSM. I wrote this article myself, and it expresses my own opinions. I am not receiving compensation for it (other than from Seeking Alpha). I have no business relationship with any company whose stock is mentioned in this article.