Over the past 10 years, S&P 500 companies have grown per share dividends at the fastest pace on record, expanding them at an average rate in excess of 10%, far in excess of nominal GDP growth. Even over the past few months, as equity indices around the world have seen dividends collapse, S&P 500 dividends have remained at record highs. Dividend growth has accounted for almost all of the returns in the S&P 500 over the past decade, and even if the dividend yield remains at the current historically low level of around 2%, falling dividend payments suggest that the S&P 500 is likely to decline over the next decade.

The annual total return on the S&P 500 over the past 10 years has averaged around 14%. This can be broken down into an average dividend yield of 2%, 11% growth in dividends per share, a 1% gain from net buybacks, and a marginal decline in the dividend yield. In other words, growth in dividends per share has been the major driver of stocks during the last decade of the bull market.

The 11% annual growth in dividends per share over the past decade compares to a historical average rate of 4%. In real terms, the figure is even more of an outlier from a historical perspective, as the chart below shows. The rapid dividend growth amid a disinflationary backdrop has not been seen since the roaring 1920s boom. 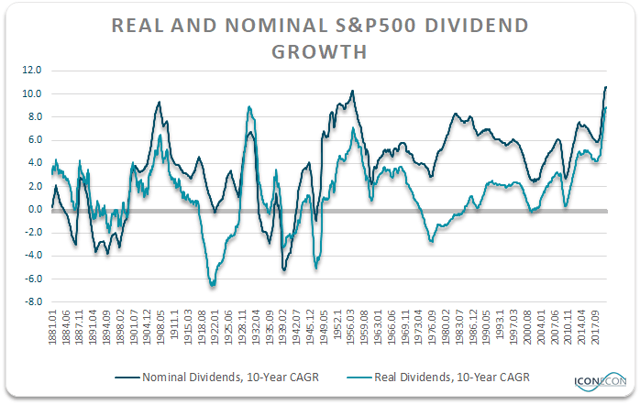 Amid a collapse in the economy in Q2, total U.S. corporate dividend payments hit a new record high of 7% of GDP, double the long-term average. This exceeds the previous peaks seen in 2008 and 1929 by a full percentage point, and suggests that dividend growth will be much slower going forward than it has been over the past decade. 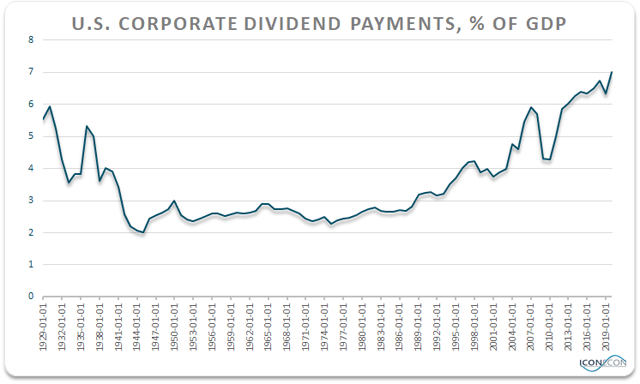 The rise in per share dividend payments has been driven by a number of one-off factors which have allowed dividends to grow at a faster pace than any other fundamental variable. We can break down dividend per share growth into four component parts: sales, profit margins, the dividend payout ratio, and net share buybacks.

Sales: Rising sales per share have contributed just over 4 percentage points to dividend per share growth since 2010, growing broadly in line with nominal GDP growth.

Profit Margins: Despite sales rising by just over 4% per year, earnings per share have managed to grow by 8% annually, with profit margins expanding by roughly 4% per year. The expansion in profit margins over this period has been entirely driven by declines in interest and tax payments, which have fallen to record lows of just 1% of sales. 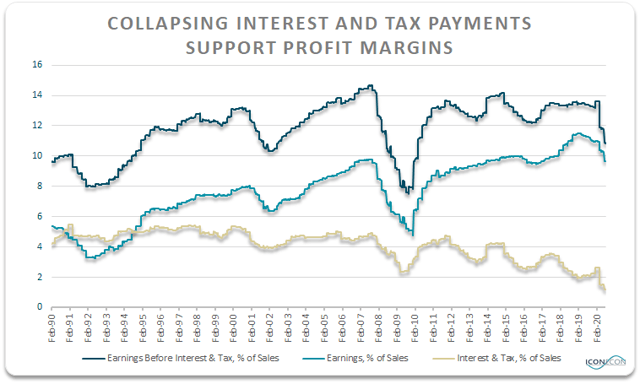 Dividend Payout Ratio: Companies have managed to grow dividends even faster than profits over the past decade, with the payout ratio rising from 30% in 2010 to 46% currently. This means that the payout ratio has contributed just over 2pp to the growth in dividends.

Net Buybacks: An additional tailwind in terms of per share growth in dividends over recent years has been the decline in share count owing to the surge in net buybacks. This has contributed almost a full percentage point to per share growth in fundamentals, compared to a historical drag of 1-2% per year. Buybacks have been aided by the rise in debt issuance, and as a result, leverage ratios in the non-financial sector have risen to multi-year highs. 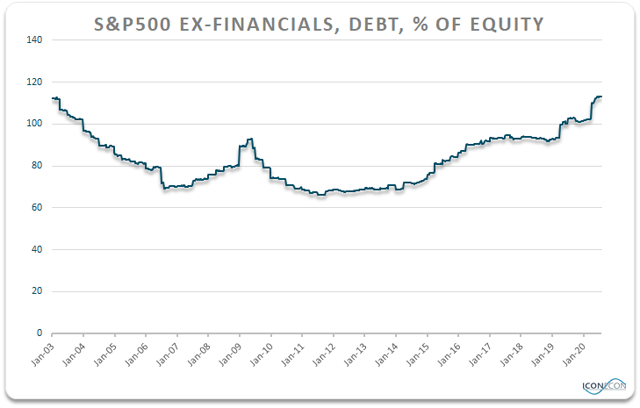 Dividend Payments Have Come At The Expense Of The Future

Going forward, we expect sales to continue to growth in line with nominal GDP, which is likely to average less than 1% over the long term for reasons previously explained here. Furthermore, the prospect for continued gains in profit margins seems very slim given the limited potential for tax and interest payments to fall. Meanwhile, we see little scope for rising dividend payout ratios given the current elevated level.

We believe that in a best-case scenario, dividends will follow the path of sales growth over the coming years as profit margins and payout ratios remain elevated, which would imply nominal dividend growth of roughly 3-4% assuming inflation comes in line with recent trends. Much more likely, however, is that dividends mean-revert downwards as a share of sales and GDP, thanks to a combination of declining profit margins and payout ratios. If we assume that dividends as a share of sales and GDP revert to their long-term average over the next decade, then this would mean per share dividend declines in the order of 3-4%. With the current dividend yield of under 2%, this would translate into negative total returns even if the trailing dividend yield remains at its current historically low level.

Disclosure: I am/we are short SPX. I wrote this article myself, and it expresses my own opinions. I am not receiving compensation for it (other than from Seeking Alpha). I have no business relationship with any company whose stock is mentioned in this article.