There are perhaps two industries that stand out as having endured the greatest impact from the COVID-19 crisis; airlines and hotels. The airlines are starting to see green shoots, although traffic is still but a fraction of former levels. Hotels are struggling as well with many still closed, or operating at historically low occupancy rates. The latter is where we’ll focus today and specifically, on Service Properties Trust (SVC), which has significant exposure via a large hotel property list.

Shares have exploded to the upside in recent days, nearly tripling in the past three weeks alone. That normally puts me off of a stock but SVC was so cheap heading into this rebound period, that it is still cheap for long-term holders today at $11, and I think it is worth a look.

Diversification is helping today, but leverage to improving hotel fundamentals will help tomorrow

To be fair SVC is not a pure-play hotel stock, and indeed, is pretty far from it. 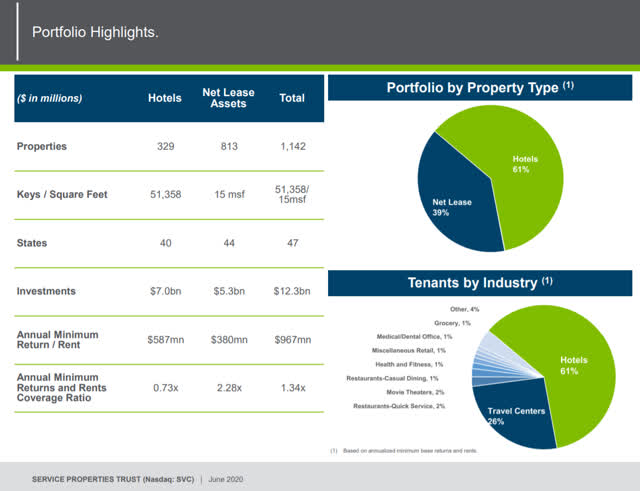 Given this, two things are clear to me. First, the selloff was enormously overdone earlier this year as SVC was punished as though it was going to go out of business. This makes no sense given it gets ~40% of its revenue from tenants that were either operating as normal, or at least somewhat close to it.

Second, the fact that Travel Centers is on time and paying its full rents is a huge positive for SVC, and while other tenants like move theaters and fitness centers are likely struggling to pay, the trust has enough revenue coming in to weather the storm. That’s critically important, because the second part of the equation after you have some certainty the trust will survive the crisis, is how well it can grow out of the crisis.

The trust’s exposure to hotels is where the rebound will come from because at some point, people will start traveling again. Business travel has essentially stopped in the US, as has leisure travel, but with reopenings across the US underway, I have to think there will be some return to a sense of normalcy into 2021. The leverage SVC has to hotels will serve it well into that recovery from its current low base of revenue.

COVID-19 actions were swift and sizable

SVC, rightfully so, was concerned about its business’ future when the crash started. Like many other entities, SVC began conserving cash in a variety of ways.

The trust has done things like sell non-core assets to raise cash, seek relief on credit covenants given extraordinary circumstances, cut capex and the dividend down to just a penny per quarter. SVC was obviously a strong income before the crisis, routinely trading with 8%+ distribution yields, but today, it is essentially nothing given the $0.04 current annualized dividend.

These actions were quite swiftly undertaken and will certainly save SVC a lot of cash this year, and for however long the actions are kept. Obviously, you want a REIT to pay its distribution, as that is generally why they are held in the first place by investors. The good news is that I think SVC will be able to reinstate its payout fairly quickly, and when it does, the yield on today’s cost will be enormous.

Below, we have FFO and the cost of the dividend for the past five years, both in millions of dollars.

SVC, interestingly enough, never paid much of its FFO in the form of dividends, at least not compared to other REITs that tend to pay out 80% or more of FFO to shareholders. SVC was more comfortable in the 50% to 60% range, and this means that when FFO does return, it will be easier for SVC to reinstate its former payout levels. In other words, because the bar was lower in the first place, reaching it once more will take less of a recovery in FFO than a REIT that was paying out 80% or 90% of its pre-crisis FFO.

SVC is currently expected to hit $2.35 in FFO this year, which is a nearly 40% decline from last year. That’s to be expected, but I think the fact that the decline is “only” 40% speaks to the trust’s diversification away from hotels. A pure-play hotel REIT would almost certainly suffer a worse decline in FFO, but SVC shouldn’t.

Analysts have the trust rebounding to $2.82 next year, and $3.50 in 2022, which sound reasonable enough given that SVC was expected to hit nearly $4 in FFO this year before the crash.

To my eye, expecting FFO to rebound to pre-crisis levels – or close to it – by 2022 seems not only reasonable, but somewhat cautious. The good news is that this leaves some upside potential in my view if the recovery is quicker than expected. Given the pace of reopenings across the country, I don’t know why FFO wouldn’t normalize later this year or fairly early on next year, so by 2022, I wouldn’t be surprised to see SVC knocking on the door to $4 in FFO once again.

SVC has shot higher like a rocket ship in the past few weeks, and the I doubt we’ll ever see those prices again. However, even at $11, this stock offers strong value.

Shares trade for just 4.8 times this year’s estimated FFO, 4 times next year’s, and just 3.2 times 2022 estimates. SVC has generally traded in the area of 7 to 8 times FFO, so it offers tremendous value even on today’s depressed FFO levels.

In addition to deep value, SVC should be able to reinstate its prior dividend levels in the relatively near future. The dividend, prior to the cut, was $2.16 annually, which SVC should earn more than this year. Moving into next year, when FFO should be closer to $3, there is no reason it cannot reinstate most or all of its former payout at that time. Whether the trust will or not is a different question, but there should be plenty of cash to do so, which is a huge positive.

With the stock offering a very cheap valuation and the potential for a reinstated payout in the not-too-distant future, SVC looks like a buy.

Disclosure: I/we have no positions in any stocks mentioned, but may initiate a long position in SVC over the next 72 hours. I wrote this article myself, and it expresses my own opinions. I am not receiving compensation for it (other than from Seeking Alpha). I have no business relationship with any company whose stock is mentioned in this article.

Contemplating The (No Deal) Cliff
Evelo Trial Progress, And Other News: The Good, Bad And Ugly Of Biopharma (NASDAQ:EVLO)
Natural Gas Market: The Traders Continue To Price In A Bullish Scenario For The Upcoming Withdrawal ...
New And Continued Jobless Claims: Best Week Of The Pandemic, But Can It Survive A New Emergency?
Weekly High Frequency Indicators: Continued Improvement In All Time Frames - For Now
M/I Homes: Building A Brighter Future (NYSE:MHO)
CrowdStrike: Powerful Business Model And Strong Execution (NASDAQ:CRWD)
China Mengniu Dairy: Profit Warning Was Not A Surprise (OTCMKTS:CIADF)