COVID-19 caused an unprecedented reduction in worldwide oil demand as a result of COVID-19, causing a collapse in Brent price. The company’s share price performance has continued to remain relatively strong, potentially indicating the company is overvalued at this time. However, the key aspect here is the strength of the company’s cash flow and low-cost asset base.

In fact, what investors are betting on is that a dramatic reduction in capital spending across the world will cause oil prices to recover significantly. Here, Saudi Aramco’s continued volumes will support shareholders significantly.

The strength of Saudi Aramco is visible through the company’s 1H business results and the milestones it accomplished. 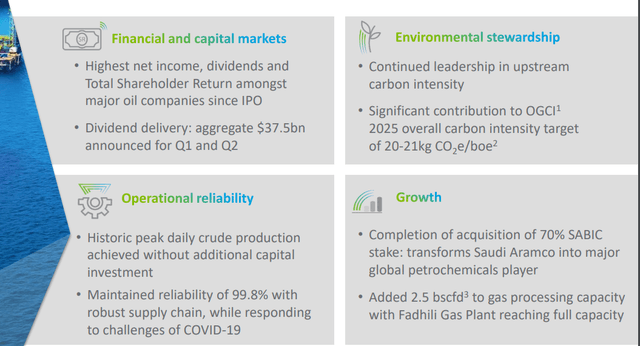 Saudi Aramco had held the highest net income, dividends, and total shareholder returns among major oil companies since its IPO. The company had an aggregate of $37.5 billion in dividends across 1Q and 2Q – roughly 2%. It remains committed to its annual goal of $75 billion in dividends in the year or a roughly 4% yield.

The company focused on continued operational reliability with 99.8% up-time as it continues to hit new production records. The company acquired its 70% SABIC stake for roughly $75 billion, making its assets more integrated, and is continuing to grow. We’d like to see the company use its financial strength to take stakes in troubled oil companies around the world.

The company had 12.7 million barrels/day in hydrocarbon production for 1H 2020, or 2.3 billion barrels across the 6-month time period. That means that through the difficult 1H 2020, the company earned almost $10/barrel, versus nearly $20/barrel a year ago. Given the company’s high tax rate to the Saudi Arabian government, those are great margins.

While its oil practically produces itself, it doesn’t need significant capital spending. More so, the company’s yield would be 6% given the company’s pre-COVID-19 dividend spending.

For the long term, Saudi Aramco has the potential to generate dramatic shareholder rewards for the government stake.

Saudi Aramco has an interesting history with the government; however, the government is clearly looking to diversify. In preparation for Saudi Aramco’s IPO, the government reduced its corporate tax rate on profits from 85% to 50%. We’d like to see the company reduce that much further to a more internationally acceptable level, like 30%.

The company can use its cash flow to repurchase shares at the same time, generating long-term Apple returns by using cash to pay dividends and buy back shares. In the immediate term, the company will continue to pay a very respectable yield of more than 4%.

Saudi Aramco’s long-term potential and advantages come from its unparalleled asset base. The company has the potential to continue generating significant cash flow for shareholders. In a normal 2019 environment, its operations will generate more than $100 billion in cash flow, with roughly $25-30 billion in capital spending.

In an expensive market, it will generate investors a mid-single-digit yield. It’ll have significant potential for continued synergies and a growing market as the sole producer for domestic demand. Effectively, it has much lower risk than current oil companies, which makes its lower yield much more acceptable to shareholders.

Of course, Saudi Aramco’s kingdom connections also dramatically increase the risk of owning the asset base independently. The kingdom’s ability to increase tax rates from 85% to 50% before the IPO is a clear example of this. Nothing stops the company from recovering the tax rate back to where it was, effectively cutting net income by 70%.

In the immediate term, with only 1.5% of the company public, and Saudi Aramco’s continued interest in raising cash, we expect the company to maintain the value. Divesting another 50%+ could mean another $1 trillion for the kingdom, allowing it to diversify its economy and wealth dramatically. However, in the long run, the kingdom’s control over the company is an enormous risk.

Unfortunately, for U.S. based investors, investing in Saudi Aramco is difficult. We recommend starting by taking a look at the iShares Saudi Arabia ETF here. Saudi Aramco is already 5% of the ETF’s assets, and that % will likely grow as the ETF attempts to better replicate how large of a component of Saudi Arabia’s market Saudi Aramco is.

For reference, Saudi Aramco makes up ~80% of the valuation of Saudi Arabia’s stock market. Alternatively, we recommend investors keep an eye on the company as a gauge of future oil markets as they wait for a potential US or European market listing, something that’s been discussed before.

Going forward, Saudi Aramco continues to be a cash-flow powerhouse. The company’s cash from operations in a normal environment is more than $100 billion annualized. The company’s low-cost asset base requires minimal capital spending, enabling strong long-term mid-single-digit returns. The company continues to have risk due to its attachment to the kingdom; however, the company’s overall cash flow is strong.

The Energy Forum can help you build and generate high-yield income from a portfolio of quality energy companies. Worldwide energy demand is growing quickly, and you can be a part of this exciting trend.

Click Here for a 2-week free trial, with an unconditional money back guarantee and 47% off of our most popular annual plan! There’s nothing to lose and everything to gain!