So far this year, the Industrial REIT sector has been one of the few winning sectors in the REIT space, with tailwinds coming from e-commerce and from their resilience to the effects of COVID-19. This popularity has undoubtedly translated into an impressive share price performance. The company that I’m evaluating today, Rexford Industrial Realty (

A Look Into Rexford Industrial

Rexford Industrial is a mid-sized REIT that is focused on owning a high-quality portfolio of industrial warehouse properties in Southern California, with 234 properties covering 28 million square feet. The company also manages 10 additional properties covering 1 million square feet. What’s attractive about Rexford is its focus on Southern California, which traditionally has had low vacancy rates due to favorable supply and demand characteristics. As seen below, the majority of Rexford’s properties are located in the prime areas of the Greater Los Angeles area, with vacancy rates below 2%. 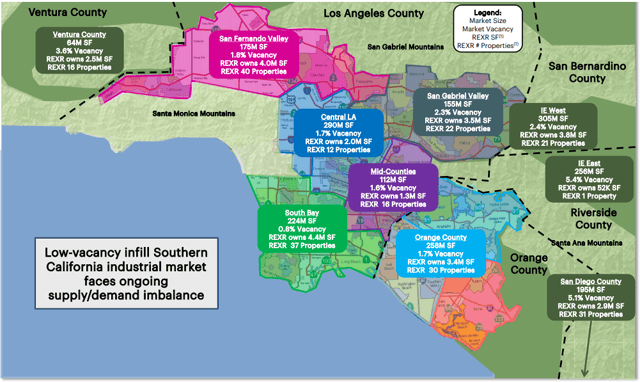 This imbalance in supply/demand helps Rexford to generate strong internal growth. As seen below, FFO per share has grown at an impressive 9.5% CAGR since the company’s IPO in 2013, and the dividend has grown at a similar rate. 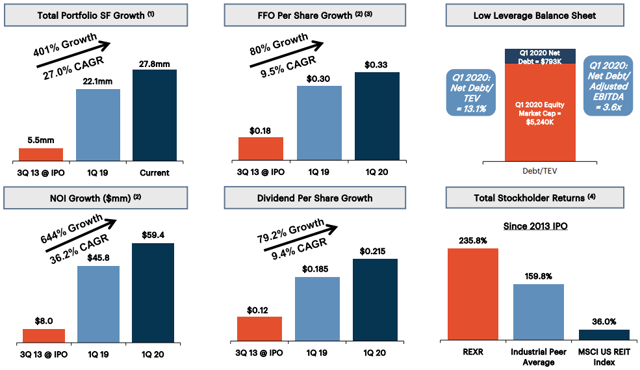 The company is showing no signs of slowing down, despite the risks from COVID-19. During the second quarter, the company achieved positive rent growth of 2.2%, and saw a steady increase in leasing activity, resulting in the largest volume of new leasing over the past 4 quarters. This is backed by a strong balance sheet, in which debt makes up only 10.5% of the total enterprise value, and the net-debt-to-EBITDA ratio stands at a very safe 2.9x as of the latest quarter.

In addition, Rexford is growing externally, as it acquired 10 properties during the April to July time frame, with stabilized yields between 4.7% and 6.3%. What I like about Rexford is its ability to unlock significant intrinsic value in its newly acquired properties after introducing value-added enhancements, as the CEO mentioned on the latest conference call:

Also in July, we acquired a portfolio of 3 industrial buildings, Penrose, Fleetwood and Carson Streets, located in the LA San Fernando Valley submarket to $35.1 million. The fully occupied buildings contain a total of 207,000 square feet on 8.4 acres of land and are leased at rents estimated to be over 33% below market. After repositioning, we expect to bring the initial yield of 3.1% to 5.3% upon stabilization.”

While occupancy still remains at a very safe 97.6%, one of the concerns regarding Rexford is the impact from COVID-19, as evidenced by the company receiving just 87% of its rental payments during Q2. Management did echo confidence in the tenant base, as rent collection for June trended up to 91%. In addition, the CEO mentioned that the majority of the tenants did not need assistance, as noted during the last conference call:

What we found was that about 80% of the PPP money that went into our tenant base was to tenants who didn’t even request rent relief. And so just by the amount of PPP loans coming into our tenant base, it does not seem to be reflective of the difficulty that the tenants are having in paying rent. The aggregate PPP amount equals about 2% of their monthly base rent in terms of tenants that took those PPP loans. So again, not an impactful number.”

Nonetheless, management’s latest guidance for 2020 remains muted, as it guided for Core FFO of $1.26 to $1.29, which, at the midpoint, represents just a 3.7% YoY growth from 2019. In addition, it appears that the early benefits from Rexford’s growing scale have worn off, as operating margin % (excluding depreciation), has held the 65% mark since 2016. This tells me that while Rexford has the opportunity to grow externally, the majority of the cost efficiencies from an economy of scale have already been realized, with little to no potential for cost improvements as a percentage of revenue.

I’m also concerned about the very high valuation of 37.4 P/FFO, at which the shares are currently trading. Applying a PEG ratio formula (by substituting EPS with FFO/share), I arrive at a PEG ratio of 3.9, which suggests that shares are deep in overvalued territory.

For reference, I arrived at the PEG Ratio (with FFO/Share replacing EPS) of 3.9 by taking the current price of $47.14 and dividing it by the midpoint of management’s 2020 FFO/share guidance ($1.275), then dividing that by 9.5, which represents the 9.5% FFO/share CAGR growth rate that the company has seen since IPO.

One factor that may have contributed to this overvaluation is the news on July 29th that Rexford Industrial Realty will replace Carpenter Technology (CRS) in the S&P MidCap400, as evidenced by the immediate 7.1% spike in share price that day (the share price has continued to run up slightly since then). This tells me that the recent performance was not driven by fundamentals, but rather by technical trading optimism.

Lastly, while Rexford’s property base is attractively located in Southern California, it doesn’t have the benefit of geographical diversification of its much larger peer, Prologis, Inc. (PLD), which is also growing its FFO/share at a decent pace. Comparatively, Prologis trades at much lower P/FFO of 29.1.

Rexford Industrial Realty owns a high-quality portfolio in the attractive and supply-constrained area of Southern California. Despite the effects of COVID-19, the company continues to make accretive acquisitions by repositioning properties, and thereby unlocking their intrinsic value. Its overall tenant base appears to be healthy and its balance sheet remains strong.

However, I see potential risks from investors overpaying for shares at today’s lofty valuation, which could partially be explained by its expected inclusion into the S&P MidCap 400 Index, and the forced buying by index fund managers as a result. Also, Rexford Industrial has already achieved the cost efficiencies that come with a larger scale, with further cost efficiencies harder to come by. Future growth, both organic and external, may not be sufficient to justify the high P/FFO valuation that shares are currently trading at, as demonstrated by the high PEG ratio (with FFO/Share as a substitute for EPS). Lastly, shares appear to be expensive relative to its much larger and better geographically diversified peer, Prologis.

As such, I have a Hold rating on Rexford Industrial Realty based solely on valuation, at the current price of $47.14 and P/FFO of 37.4, and would not recommend new investment dollars at this price. I would recommend buying shares below $36, which, implies a P/FFO ratio of 28.5. This would bring shares down to a fair valuation, with consideration to its strong balance sheet, growth prospects, and its peer’s valuation. 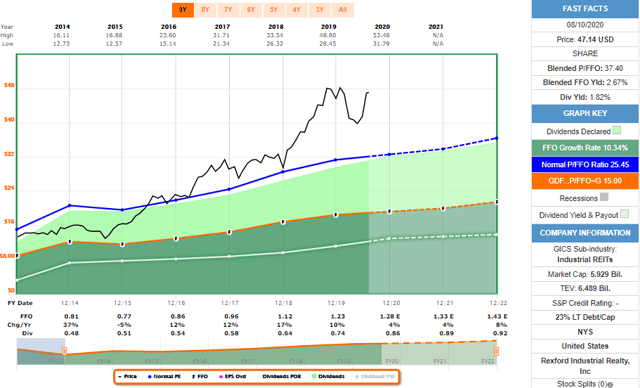 Capitacommercial Trust: Near-Term Resilience Despite Long-Term Concerns (OTCMKTS:CMIAF)
bluebird bio Should Be On Your Radar With Multiple Catalysts Expected This Year And 2021 (NASDAQ:BLU...
Friday's jobs report should show hiring is slowing, but not that a recession is near
Valaris: Here's The Wipeout (NYSE:VAL)
GrafTech: Great Business And Excellent Acquisition Candidate
The Economy May Fall Off The $600 Cliff
Fix Boards, Fix Capitalism
Prosus N.V. (PROSY) CEO Bob van Dijk on Q4 2020 Results - Earnings Call Transcript