When the final result is expected to be a compromise, it is often prudent to start from an extreme position.”

Today, we look at an intriguing small-cap, oncology concern for the first time since we posted a 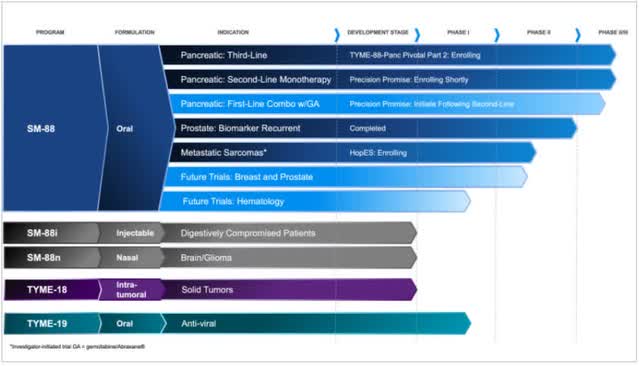 The company is running an ongoing TYME-88-Panc phase II trial to evaluate SM-88 as a potential treatment for patients with third-line pancreatic cancer. If eventually approved, SM-88 will be the first FDA approved product for third-line treatment. At the time of its last update in summer, it was in the enrollment phase of the TYME-88-Panc pivotal trial and a “Precision PromiseSM adaptive randomized Phase II/III registration-intent trial evaluating oral SM-88 as second-line monotherapy for pancreatic cancer.“ The company has earlier stage candidates (above) in its pipeline that are not part of this analysis.

As stated in my previous article, Tyme entered into a collaboration deal with Eagle Pharmaceuticals (EGRX) on January 7th. The deal has the following stipulations.

The parties have agreed to co-promote SM-88 in the U.S. with Eagle responsible for 25% of the sales effort for which it will receive 15% of net revenue. Tyme will be responsible for the remaining 75% of the promotional effort (and 85% of U.S. sales) in addition to clinical development, regulatory approval, commercial strategy, marketing, reimbursement and manufacturing. Tyme retains the right to repurchase Eagle’s co-promotion right for $200 million.”

In early August, the company received Orphan Drug status for SM-88 for pancreatic cancer. Tyme also filed a prospectus for a $250 million mixed shelf offering ten days later. It indeed did a small secondary raise in September which we discuss in the next section. In late August, the company announced a proof-of-concept Respond trial to investigate its compound TYME-19 metabolic agent as a therapy against Covid-19. I put no value on these efforts due to scores of companies working on therapeutics and the coming distribution of Covid-19 vaccines. Finally, in late November, the company announced a new CEO with over 20 years’ experience in the industry.

This company gets very sparse attention from the analyst community. Only two analysts have chimed in on this stock since our last article in January. On August 27th, Canaccord Genuity reissued its Buy rating and $8.00 price target on TYME. On November 13th, H.C. Wainwright reiterated its own Buy rating and $9.50 price target on the shares of Tyme. The company ended the first half of 2020 with just over $21 million of cash on the balance sheet. It did a secondary offering with warrants in September that raised approximately $4 million in additional funding. Leadership believes its burn rate will be between $7 million and $8 million per quarter in 2021.

Tyme still seems to have great potential. As another recent article stated, we should have a better idea of whether data will support approval of SM-88 for pancreatic cancer sometime in 2021. If approved, other indications like for prostate cancer could follow.

On the downside, the company does not provide enough updates of its progress in my opinion. One key reason analyst commentary is sparse. In addition, Tyme appears it will need to raise additional capital in the coming year and Covid-19 seems to have impacted the speed of enrollment in some trials.

That said, while extremely speculative, the risk/reward profile of TYME still appears favorable given its small market cap, upcoming potential catalysts and the size of the potential markets it is aiming at.

I will never compromise Truth for the sake of getting along with people who can only get along when we agree.“

Bret Jensen is the Founder of and authors articles for the Biotech Forum, Busted IPO Forum, and Insiders Forum

Author’s note: I present and update my best small-cap Busted IPO stock ideas only to subscribers of my exclusive marketplace, The Busted IPO Forum. Our model portfolio has crushed the return of the Russell 2000 since its launch in the summer of 2017. To join the Busted IPO Forum community, just click on the logo below.

Disclosure: I am/we are long EGRX, TYME. I wrote this article myself, and it expresses my own opinions. I am not receiving compensation for it (other than from Seeking Alpha). I have no business relationship with any company whose stock is mentioned in this article.

Parex Resources - Strong History Of New Shareholder Value (OTCMKTS:PARXF)
In A Weak Banking Sector, Investors Taking A 'Wait And See' Approach With TCF Financial (NASDAQ:TCF)
Halliburton: Light At The End Of Tunnel (NYSE:HAL)
Weekly High Frequency Indicators: Is An Out Of Control Pandemic Starting To Cause A Reversal?
Will We See A 'September Effect' In 2020?
Macy's: Good, But Not Good Enough (NYSE:M)
How to be Financially Smart with Your Income
The Weakest 6-Month Momentum Picks From The S&P 100