Resolute Mining released its Q2 production results on Wednesday, and the company reported quarterly gold production of 107,000 ounces at all-in sustaining costs of $1,003/oz. These production results were up 32% year over year from Q2 2019 following a shake-up of the company’s portfolio with the divestment of the Ravenswood Mine and the acquisition of Toro Gold’s Mako Mine in Senegal. Meanwhile, costs also benefited from the shake-up. All-in sustaining costs came in at the lowest levels in over a year after dropping the high-cost Ravenswood Mine that’s been a massive drag on consolidated margins for the company. Let’s take a closer look at Resolute’s operations below:

Beginning with the company’s Syama Mine in Mali, Resolute saw quarterly gold production of 63,700 ounces at all-in sustaining costs of $1,113/oz. This translated to 10% production growth sequentially at slightly higher costs. The increased production was driven by a massive improvement in recovery rates as well as higher throughput. During Q2, gold recovery rates jumped by over 350 basis points to 86.2%, and this came despite lower grades. Meanwhile, quarterly throughput was up 920,000 tonnes for Q2, up from 829,000 tonnes in Q1.

The better quarter at Syama was a result of an exceptional performance from the Syama Sulphide operations, where production increased by 64% from Q1 to 35,200 ounces. These improvements were due to the completion of the repairs to the roaster and higher throughput, thanks to extensive optimization work on the crushing and milling circuits. Unfortunately, this increase in production at Syama Sulphide was offset by a weaker quarter at Syama Oxide, with gold production down 21% sequentially to 28,500 ounces. The drop in output sequentially was due to the cessation of mining at the Tabakoroni open pit. Resolute will be focused on the Cashew, Paysans, and Tellem satellite deposits, with Cashew expected to be ready to deliver high-grade oxide ore by Q4. 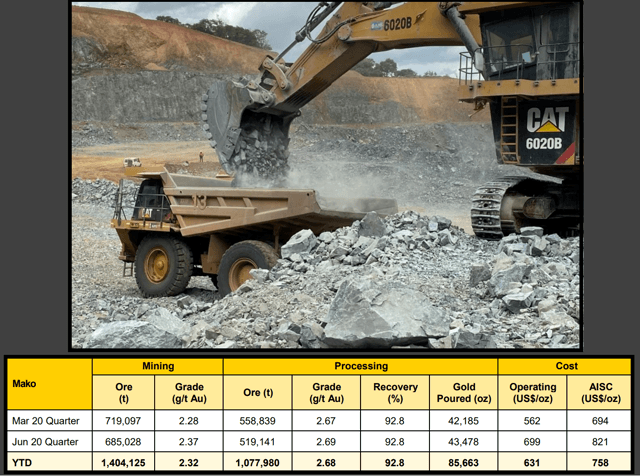 Moving over to the company’s Mako Mine in Senegal, we saw quarterly gold production of 43,500 ounces at all-in sustaining costs of $821/oz. These production figures were up 3% sequentially from the 42,100 ounces in Q1 2020 with lower throughput offset by slightly higher grades (2.69 grams per tonne gold vs. 2.67 grams per tonne gold). Thus far, Mako has been an excellent addition to the company’s portfolio, and the updated Life of Mine plan released this month has extended the mine life by two years. Based on the updated Life of Mine plan, Mako is expected to continue to see over 900,000 ounces of production through to 2027 at all-in sustaining costs of $900/oz. Assuming the company can keep adding to the mine life here, the purchase price of $305 million is looking like a solid investment, especially as the mine was able to replace the underperforming Ravenswood Mine. 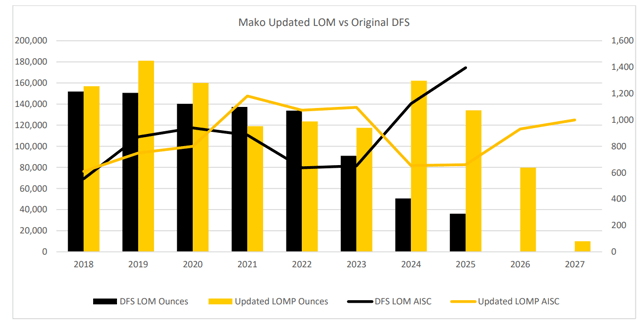 Based on the solid operating results, Resolute finished Q2 with $87.5 million in cash and bullion and a $220 million of net debt. If we include the promissory note of $34.9 million related to the Ravenswood divestment, the cash balance improves to $122.4 million, with net debt of $185.1 million. While this is a decent balance sheet as far as peers go, there are quite a few Australian gold producers out there with much better balance sheets, as the chart below shows. 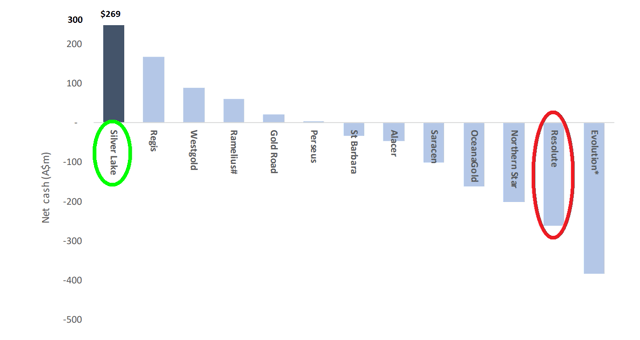 As noted in the earnings report, Resolute has reiterated its FY2020 guidance of 430,000 ounces at all-in sustaining costs of $980/oz and remains on track to hit this guidance with over 218,000 ounces produced already in H1. While this would be an improvement from a cost standpoint from the past two years, these cost figures still leave Resolute ranked 36th out of 60 gold producers in the sector from a cost standpoint, and above the industry average of $970/oz. Meanwhile, if we compare Resolute to other African producers, it’s ranked at the bottom of the pack from a cost standpoint, with the 4th highest costs among 15 producers. Therefore, for investors willing to buy the generally riskier Tier-3 jurisdiction producers in Africa, Resolute has one of the weakest margin profiles within the group at its current cost profile.

Some investors might argue that the Solar-Hybrid Power Station that’s being built at the Syama Mine should be a significant tailwind to margins as it’s expected to lower energy costs by up to 40%. While this is positive, I don’t expect more than a $50/oz benefit on a consolidated basis once it’s installed. Therefore, Resolute will remain a higher-cost producer among the African names, which are generally producing gold much below the industry average due to the lower labor costs and high-grade nature of their deposits.

Finally, while relatively high costs and a sub-par operating jurisdiction already make Resolute a less suitable choice for risk-averse investors in the sector, the significant share issuance earlier this year is another knock against the name. Over the past six months, Resolute has issued over 160 million shares at A$1.10 to buy back a royalty on the Mako Mine, and to pay off the Toro Gold Bridge Facility. The whole point of owning gold producers is that they do not need to dilute as they have the positive cash flow to take care of building up their balance sheet and buying back royalties, shares, or streams on their properties. However, in Resolute’s case, we’ve seen a lot of shares issued and not at great prices. 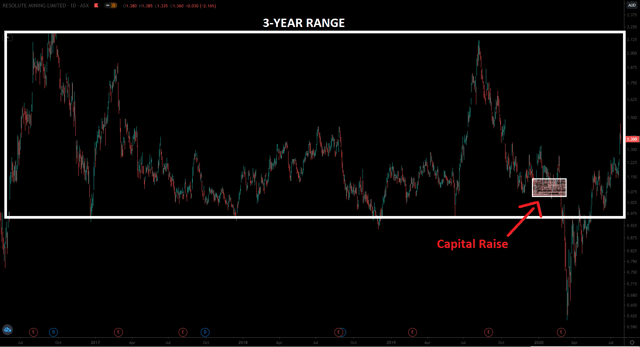 As the chart above shows, the capital was raised in the bottom 15% of the three-year range for the stock during a period when gold was up 25%. This is a very poorly priced share issuance, and it comes at a significant dilution to shareholders of more than 16% (160 million shares divided by share count of 940 million shares pre-raise). While dilution isn’t the end of the world in a sector that’s known for dilution, it doesn’t look great when we see it issued at low prices in a rising gold price environment. This is especially true by a producer that shouldn’t need to raise this much capital in the first place if operations were running smoothly like most names in the sector. This doesn’t mean that a rising tide in the form of the gold price won’t lift Resolute. However, I would rather own companies that are buying back shares and increasing their dividends like Alamos Gold (AGI) than own one hamstringing future earnings per share with share sales at multi-year highs for gold. 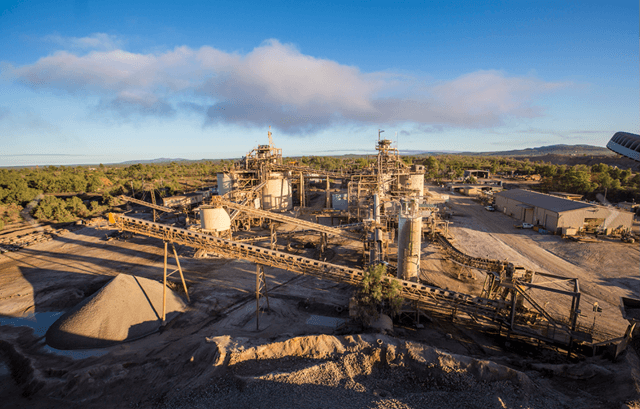 Resolute Mining had a strong first half to the year, but I continue to see the stock as an Avoid in favor of producers in Tier-1 jurisdictions that are returning capital to shareholders. While the Syama Solar-Hybrid Power Station and improved operations at Syama Sulphide are tailwinds to the Resolute investment thesis, they are overshadowed by a risky operating jurisdiction, industry-lagging margins, and an unfavorable capital raise. In fact, it was one of the worst priced capital raises this year among gold producers outside of the horrid capital raise by Red 5 (OTC:RFVVF) near the March lows. Therefore, I believe investors should focus elsewhere in the sector, as there are several more attractive opportunities within the Gold Miners Index.

Disclosure: I am/we are long GLD, AGI. I wrote this article myself, and it expresses my own opinions. I am not receiving compensation for it (other than from Seeking Alpha). I have no business relationship with any company whose stock is mentioned in this article.

Will We See A 'September Effect' In 2020?
May Producer Price Index: Core Final Demand Down 0.1% MoM
Investors are terrified of something a year from now and they're placing bets to hedge themselves
Newtek Business Services Has Bright Future In Spite Of Dividend Cut (NASDAQ:NEWT)
Hess Midstream: High Tech Growth Rate And A Midstream Dividend (NYSE:HESM)
Depressed Midstream Valuations More Than Reflect The Rise Of Renewables
3 Powerful Growth Stocks Driven By The Network Effect
Microsoft + TikTok = No Freaking Way