However, long-term and capital appreciation-seeking investors should steer towards other companies due to pandemic effects and particularly due to an unwelcoming New Jersey regulatory environment.

Public Service has operated carefully throughout the COVID-19 pandemic; second-quarter results are expected to show the same push-pull between higher residential sector energy use – particularly from New Jersey residents who were required to stay home from New York offices – and lower use by the New Jersey’s commercial and industrial sectors. During April, the shutdowns meant a net loss of –5-7% of electricity demand, according to the company.

The poor New Jersey regulatory environment for natural gas is a concern given the company’s 1.8 existing million direct gas customers, as well as its use of natural gas for 40% of its electricity generation. This negates the company’s advantage of proximity to the gigantic nearby Marcellus and Utica natural gas fields in Pennsylvania, Ohio, and West Virginia.

The Energy Information Administration (EIA) predicts consumption of electricity will decline in the U.S. by -4% in 2020 and then grow by 1% in 2021. This major decline in 2020 – occurring in the commercial and industrial sectors – is due to shutdowns to alleviate the COVID-19 pandemic.

Specifically, the EIA estimates that in the second quarter of 2020 nationwide:

* Commercial electricity sales were -11% lower than a year ago;

* Industrial electricity sales were -8% lower than a year ago; and

* Residential electricity sales were +8% higher than a year ago.

And yet, despite lower electricity generation – estimated to be -5% nationwide in the first half of 2020 – natural gas-fired power generation in the Lower 48 increased by 9%, or nearly 55,000 giga-watthours (GWh), making natural gas the fastest-growing source of electric power generation.

Public Service Enterprise Group has oversight from and reporting responsibilities to public utility commissions primarily in New Jersey but also in New York. In rate cases, it is answerable to a variety of input from customers to stakeholders.

Most critically, when arguing to disallow the PennEast pipeline to bring additional needed natural gas to New Jersey, Governor Phil Murphy said, “I am committed to transitioning New Jersey to 100% clean energy by 2050.” (“Clean energy” is defined as nuclear and renewables.) PennEast, from which PSEG Power has committed 125 MMCF/D of natural gas transport capacity if the project goes forward, is in limbo awaiting a decision on whether or not the U.S. Supreme Court will hear an appeal of the Third Circuit’s denial of the pipeline.

In 2018, Governor Murphy signed legislation requiring New Jersey utilities to implement energy efficiency programs with initial target reductions of 2% of annual electric use and 0.75% of annual gas use. At the beginning of 2020, he reiterated zero-hydrocarbon goals for the state in his Energy Master Plan. It is important to note that the EMP’s discouraging of natural gas use extends even past electricity generation to use for inexpensive heating (!) by, among others, PSE&G’s 1.8 million direct natural gas customers.

Public Service Enterprise Group, headquartered in Newark, New Jersey, comprises two major parts: a) Public Service Electric & Gas (PSE&G, not to be confused with shorthand PSEG or PEG for the parent company), the largest retailer of gas and electricity in New Jersey and regulated by the New Jersey Board of Public Utilities, and b) Power, which owns power generation assets throughout the country and generates power for PSE&G and others.

Public Service Enterprise Group is part of the 15-stock, price-weighted Dow Jones Utility Average Index (DJU). Although regulated utilities have their own territories, and so, don’t compete directly, they do compete for investment. Other diversified utilities in the index are Sempra (SRE), Exelon (EXC), CenterPoint Energy (CNP) and NiSource (NI).

Utility investments are not automatically “safe.” The emphasis on investment in renewables over infrastructure and safety was a key factor in Pacific Gas & Electric’s tragedies of fires, multiple forced electrical outages for millions of people and dozens of fatalities. Even now, operations at Pacific Gas & Electric still appear caught between the Scylla and Charybdis of planned power outages to prevent fires during fire season and stakeholder rejection of fossil fuels to power the needed backup microgrids.

Public Service’s Power division has committed to reduce greenhouse gas emissions from the company’s fleet 80% from 2005 levels by 2046. Although this does not address sourcing of emergency, marginal, or as-needed purchased power, steps include reducing coal-fired generation units from its fleet which will be complete by mid-2021 with the retirement of Bridgeport 3, investing $1.9 billion in solar energy projects, and making no plans to buy/build fossil fuel generation. (However, the company just brought on three new efficient combined-cycle (natural gas) generation units.)

Public Service Enterprise Group’s base load units are nuclear (no natural gas or coal), while its “load following” and peaking units are natural gas. PEG has the significant advantage of proximity to massive Appalachian natural gas fields and does buy directly from producers both for its natural gas customers and for electric generation fuel. However, New York and New Jersey government and regulatory officials want to limit, and completely eliminate, natural gas use even for heating as well as for electricity generation, preferring zero-carbon sources instead.

In the diagram below, Marcellus gas is shown in green and Utica gas is shown in orange. The reduced volumes in 2020 are partly due to reduced production of oil and oil-associated gas, particularly in the Permian basin. 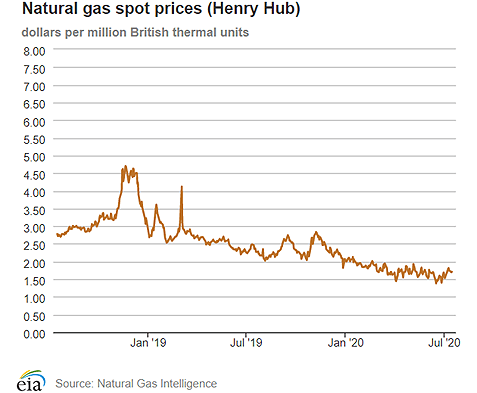 Public Service Enterprise Group’s first-quarter 2020 net income was $448 million, or $0.88/share, below 2019 first-quarter income of $700 million, or $1.38/share. Due to the closure of most businesses, schools, and government buildings, the company said its electric load declined 5-7% from the end of March through April and anticipated the reduction would extend through the second quarter or longer.

Also for 2019, natural gas sales to its 1.9 million customers (0.7% customer growth rate over 5 years) were 2.59 billion therms of natural gas. This was an average of 720 million cubic feet per day, with an understanding that gas for heating fluctuates dramatically by season: winter is the peak. Note these are firm sales only; most utilities also sell natural gas on a cheaper, interruptible basis to some commercial and industrial customers. The mix was:

These 2019 mixes are important. For example, if New Jersey followed the EIA national estimates on electricity decline and the second-quarter mix was the same as the annual average shown above, second-quarter electricity use in PSE&G territory would have been -4.5% lower, similar to the -5% to -7% decline the company predicts. 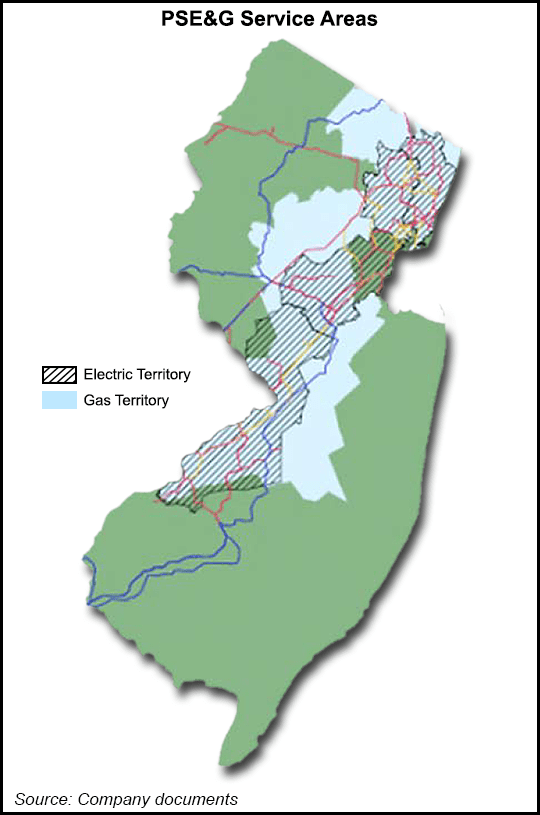 In 2019, Power generated 53% of its electricity from nuclear, 40% from oil and natural gas (primarily natural gas) and 7% from coal. The company and its regulators identify nuclear generation as a zero-carbon source, and thus preferred for meeting low-hydrocarbon ESG goals. 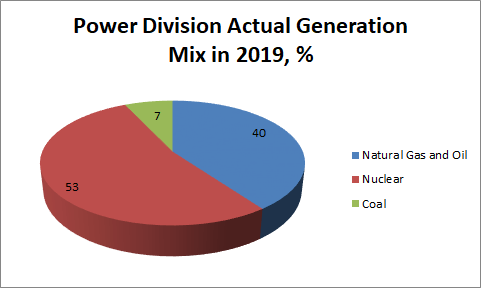 Strategy and Capital, Including GSMP II

Public Service continues negotiations toward a joint venture agreement that would include acquiring a 25% equity interest in Ørsted’s 1100 MW Ocean Wind project.

The company plans a $12-16 billion capital program over 2020-2024. Among these investments is the $2.8 billion Gas System Modernization Program II (GSMP II) to update aging cast-iron and unprotected steel pipes to stronger, more durable plastic piping. This makes the lines safer and better by reducing leaks, including leaks that could cause explosions.

Insiders own a negligible 0.06% of the outstanding stock.

The company’s trailing twelve months’ return on assets was 3.4% and return on equity was 9.6%.

A beta of 0.58 means Public Service stock is less volatile than the overall market.

The dividend of $1.96 per share yields 3.6% at the company’s current stock price. The annual cash dividend commitment is about $1 billion.

The company’s market value per share is well above the book value of $30.26/share, indicating positive market sentiment.

The ratio of enterprise value-to-EBITDA is 10.5, slightly above the desirable maximum of 10.0. Like the price-to-earnings ratio of 19.5, this suggests the stock is not bargain-priced.

Dividend hunters and ESG investors may like the modest-dividend (3.6%), lower-beta stock of Public Service Enterprise Group. The company is to be especially commended for its pro-active GSMP II to replace aging, unsafe, leak-prone pipelines.

Investors seeking long-term capital appreciation are advised against Public Service Enterprise Group due to a) sales declines of indeterminate length in electricity and natural gas use from the pandemic shutdowns (initially -5-7%), and b) New Jersey officials’ discouragement of further use of cheap, inexpensive nearby natural gas (“none by 2050”) for direct heating and electric generation. In 2019, natural gas and oil – mainly natural gas – were a critical 40% of the company’s electric generation fuel mix.

I hope you enjoyed this piece. I run a Marketplace service, Econ-Based Energy Investing, featuring my best ideas from the energy space, a group of over 400 public companies. Each month I offer:

*3 different portfolios for your consideration, summarized in 2 articles, with portfolio tables available 24/7 to subscribers;

*3 public SA articles, for a total of 8 energy-related articles monthly;

*my experience from decades in the industry.

Disclosure: I am/we are long SRE. I wrote this article myself, and it expresses my own opinions. I am not receiving compensation for it (other than from Seeking Alpha). I have no business relationship with any company whose stock is mentioned in this article.