The purpose of this article is to evaluate the PIMCO High Income Fund (PHK) as an investment option at its current market price. This is a fund I have avoided for years, despite regularly buying and recommending other PIMCO CEFs. As we move into the second half of 2020, I continue to see little merit in owning PHK. The fund has a history of distribution cuts, with another cut just announced at the beginning of June. Thus, while PHK’s high yield looks attractive on the surface, the sustainability of it is constantly called into question. Further, while PHK typically trades at a more expensive premium, it is still not cheap today, telling me it is not the right move for value-oriented investors either. Finally, high yield bonds have multiple headwinds in front of them, especially as many states in the U.S. begin to reverse their reopening plans. With new issuance rising, coupled with a rising number of downgrades from investment grade bonds flooding into the high yield sector, I expect total return to be very limited going forward.

First, a little about PHK. It is a closed-end fund whose investment objective is “to seek high current income as a primary focus and capital appreciation as a secondary objective.” It invests a substantial portion of assets in a variety of mortgage-related securities and also high-yield credit. Currently, the fund trades at $5.41/share and pays a monthly distribution of $.048/share, which translates to an annual yield of 10.75%. The last time I reviewed PHK was in January, when I continued to advocate avoiding this fund, as I have for years. In hindsight, this was a good call, although I should have been more bearish, as PHK has dropped by over 25% since that review, as shown below:

Now that we have pushed into the second half of 2020, I wanted to take another look at this fund to see if I should change my outlook from here. After review, while PHK’s valuation is more reasonable than it has been in the past, I still see multiple reasons to avoid this fund, and I will explain why below.

Distribution Cut – It Was Only A Matter Of Time

To begin, I want to touch on the biggest development since my last review, which was another distribution cut for PHK. This should not have come as a surprise, as I have noted the fund’s distribution coverage ratios have been weak for some time. With the fund having a history of routine distribution cuts, it was really just a matter of when, not if, another cut was going to occur. Back on June 1st, PHK was one of just a few PIMCO CEFs that saw distribution cuts, with PHK’s being particularly painful. In fact, the fund saw a drop in income of almost 22%, as shown in the table below:

My takeaway here is resoundingly negative. I have avoided PHK in the past for two primary reasons: its high premium to NAV and its history of distribution cuts. Clearly, the distribution cuts have continued. This clouds my opinion of the high yield offered by PHK. While it looks attractive, it has not been sustainable for some time. To me, I want an income stream that is not only high, but I can depend on. Therefore, PHK does not fit my bill.

I now want to turn to the underlying holdings within PHK’s portfolio. When reviewing this fund, I often discuss my outlook for the high yield credit market, as this is the largest sector by weighting. Currently, this allocation comes in just under 29%, which is 1% higher than back in January: 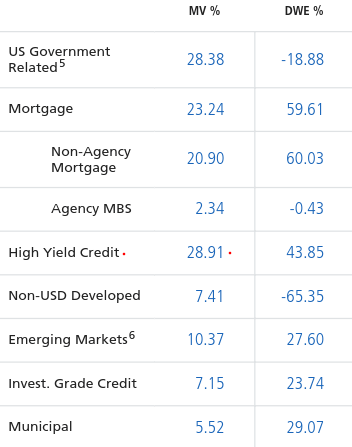 Clearly, what is going on in the high yield market has an important impact on PHK, so understanding the current climate is critical to evaluating the fund.

As my readers are aware, high yield is an area I am generally avoiding right now, given my concern that markets are under-estimating the long-term impact of Covid-19. I believe both the equity and bond markets are artificially high, driven by stimulus measures, and don’t accurately reflect the risks investors would be exposing themselves to.

On that note, I want to discuss two key reasons for this perspective, both related to supply. The first point is that high yield issuers have been selling new bonds at a record rate. In fact, June 2020 saw the largest dollar amount of high yield debt sold in decades, as shown below:

As you can see, 2020 has seen a tremendous increase in high yield issuance, with June setting a record, and April and May not far behind. So far, investors have been more than willing to buy these bonds, especially since the Fed has offered support that now extends to the high yield sector. However, the rising supply concerns me because if investor demand slows, or the Fed’s appetite for this asset class wanes, this record level of supply will depress current prices for the debt.

My second point expands on the supply issue. Aside from rising issuance, the total amount of high yield debt outstanding has been increasing due to downgraded investment grade debt. As the health pandemic pressures corporate profits, and rising debt issuance increases the leverage across the corporate landscape, it should not come as a surprise that bonds are getting downgraded as a result. In fact, through June of this year, there has been a sharp uptick in BBB-rated bonds (the lowest investment grade rating) downgraded into the high yield sector, as seen below: 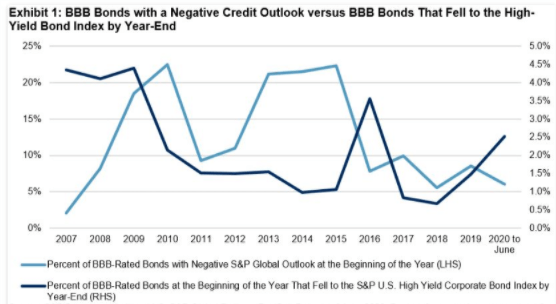 My takeaway here is investors need to consider the headwind created by this rising level of total supply. As supply rises, prices will fall if demand does not keep up. Considering there are no signs that new issuance or downgrades are slowing down, I have to expect the supply story will be a headwind in the second half of the year. This creates a headwind for PHK by extension.

Valuation More Reasonable, But Not Cheap

My next point touches on the fund’s valuation. As I noted, PHK has historically had a very large premium, which was usually a difficult hurdle for me to get over in order to recommend the fund. Given the poor performance so far in 2020, the silver lining for potential investors now is the buy-in price is less expensive than it has been in the past. While a premium still exists, it is much lower than where it stood in January. However, the premium is not necessarily “cheap,” and it remains above the 8% level due to a deterioration of the fund’s underlying value. To illustrate both of these points, consider the tables below:

As you can see, this valuation story offers both a sign of caution and an opportunity. The premium to own the fund has come down significantly, so investors who were considering PHK in the past may be very interested now. However, we have to consider that a premium above 8% is still a premium price, especially when there are many other funds trading at cheaper prices (even discounts). Further, the dramatic decrease in the fund’s underlying value is a major concern. While this factors in the March sell-off, it is clear PHK has not seen the value of its assets rise enough during the rebound to recover the bulk of its losses. In summary, the valuation story is not compelling enough yet for me to gamble on this CEF.

My final point centers around PHK’s income production, which is always of critical importance for income vehicles. This is especially relevant for PHK, as the fund saw a steep distribution cut back in April last year, followed by the cut in June which I highlighted earlier in this review. Therefore, assessing the current coverage ratios gives us some insight into how the fund’s distribution will hold up in the future.

Unfortunately, the coverage story remains negative, with PHK holding on to a very large negative UNII balance, as well as weak coverage ratios. To illustrate, consider the UNII report from PIMCO I used during my January review, compared to its most recent report, shown below, respectively:

As you can see, PHK’s story is not overly comforting. In truth, these UNII figures are likely to improve in the July report because that will include the June figures post-distribution cut. So we should expect to see the coverage ratios see a marked improvement. However, this won’t be because of stronger performance from the fund, but rather that it simply needs to earn less in income to properly cover its adjusted distribution.

Furthermore, the negative UNII balance is quite high, at almost four months of income. This figure is not likely to be improved unless PHK can start over-earning its distribution, which is something history does not suggest is likely. Therefore, it is clear to me PHK has not solved its underlying income problem, which justifies my cautious outlook on the fund.

PHK remains on my avoid list for 2020. The recent income cut, stubbornly weak coverage ratios, and premium price lead me to invest elsewhere. Further, I am generally avoiding high yield credit right now, which is an area PHK is heavily exposed to. For investors wanting to take more of a risk and invest in below investment grade debt, I still would not recommend PHK because there are better options out there, at cheaper prices. Therefore, I believe investors would be wise to hold off on buying PHK at this time.