(Created by author from here)

PepsiCo has a history of providing solid top and bottom line growth over the last twenty years. Following its acquisition of the Quaker Oats Company for approximately $14 billion in 2001, PepsiCo became the fourth largest consumer goods company in the world and had revenue, gross profit and net income increasing at a compounded annual growth rate of about 5.5%. A part of this growth was attributed to the expansion of the new snack products brought with the Quaker Oats Company merger, including the popular Gatorade brand. By 2010, PepsiCo had also acquired two of the largest bottling operations in the United States for $7 billion, which is similar to the Coca-Cola Company’s (NYSE: KO) strategy to centralize its bottling operation. PepsiCo’s growth had slowed considerably after 2010, with the company reporting a compounded annual growth rate of about 1.4% for both revenue and net income over the last decade. The company has also seen significant expansion of debt since acquiring its bottling operations and currently has almost $40 billion in long-term debt. Looking at the financial history of the company, it’s clear that PepsiCo has achieved growth of key financial metrics, but this growth has stagnated over the last decade. 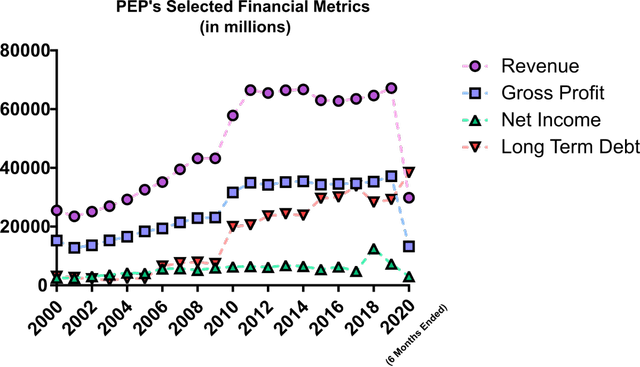 In order to better understand the company, let’s take a look at its key business areas. The current divisions within PepsiCo operate globally and are divided between three different segments, as shown below: 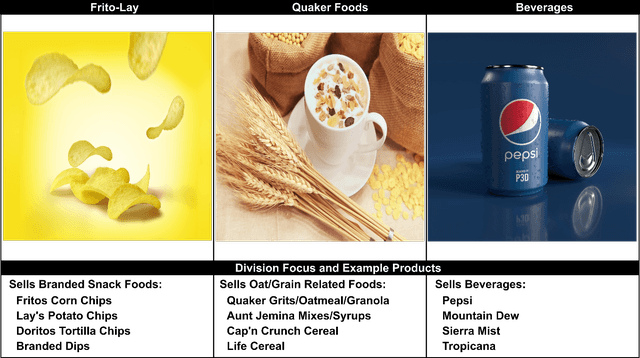 Note that some of PepsiCo’s business segments were reorganized in 2019, and the above financials were reported for 2017, 2018, 2019 and 2020 with the reorganized divisions.

However, the margins don’t tell the whole story when looking at PepsiCo and the Coca-Cola Company. PepsiCo has a diverse offering of food & beverages and a centralized bottling operation that helps make the company defensible during economic downturns. During Q2 2020, it reported about a 3% decrease in revenue compared to Q2 2019, highlighting how resistant the company’s sales have been to the current global health crisis. The Coca-Cola Company, in comparison, has transitioned to independent bottlers and has focused more on concentrate sales (i.e., restaurants, cafés and other businesses) over the last decade, which has resulted in nearly a 30% decline in sales in Q2 2020 compared to Q2 2019. Taken together, PepsiCo offers a highly diversified business in terms of products and geographical sales, which has helped make the company very financially stable and defensible during the current economic downturn. 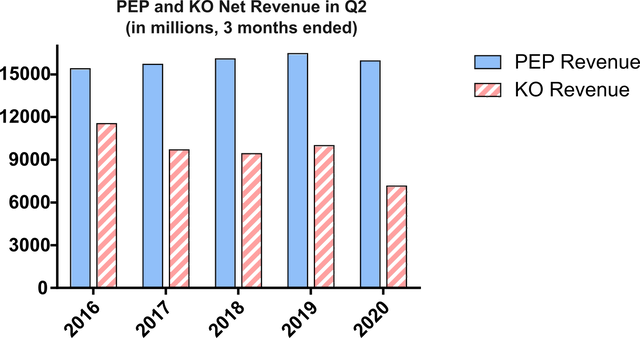 The company is also in the process of acquiring Be & Cheery and Pioneer Food for $705 million and $1.7 billion respectively. These acquisitions have some very notable strengths for PepsiCo, including expanding its selection of healthy food and beverage opportunities to limit excise tax (more on this below) and expanding the international presence of the company. Considering that nearly 70% of its operating profit comes from North America, expansion of international sales has the potential to be a strong growth catalyst for the company moving forward.

Finally, no discussion about PepsiCo can be complete without mentioning the company’s new direct-to-consumer online platform. Both PantryShop.com and Snacks.com offer food and beverages from PepsiCo. Although the direct-to-consumer online platform only contributes to a small percent of the company’s total sales, the availability of this service during the global shelter in place could allow for PepsiCo to be well-positioned if consumer behavior has a more permanent shift towards online/convenient orders for snacks and beverages.

Taking a closer look at the P/E ratio, which is a commonly used metric for determining stock valuation, we can see that PepsiCo is currently at a higher valuation. It is estimated to have a forward P/E ratio of approximately 25.5x as of Friday, August 21th. Comparing this with the historical adjusted P/E ratio of the company, we see that PepsiCo’s P/E ratio has been higher 10.5% of the opening market days since 2010 and 19.7% of the opening market days over the last five years. The adjusted P/E ratio graph below was calculated by dividing the opening price for all market days during the last decade by the adjusted EPS reported for that particular year. 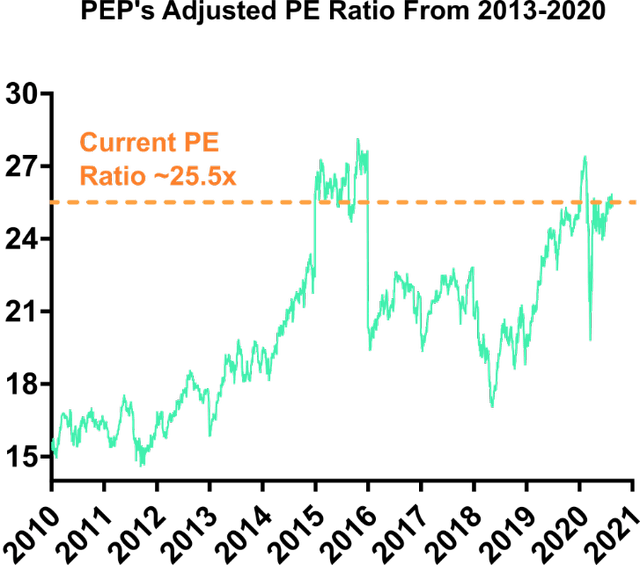 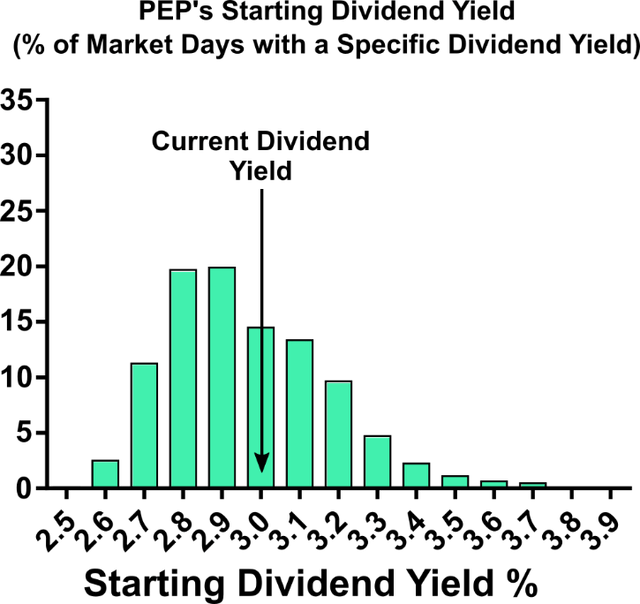 Another important metric for dividend growth investing is the future yield on cost (YOC). Below is a model predicting the YOC over time from an investment in PepsiCo or the Coca-Cola Company in 2020. The model assumes the following:

From the model, we can see that purchasing PepsiCo at the current share price has the potential to support about a 16.74% yield on cost with dividends reinvested after 20 years. Analysts are expecting an average 10.5% increase in EPS over the next few years, which is higher than the modeled dividend growth. Interestingly, the Coca-Cola Company also had a similar modeled yield on cost to PepsiCo.

A comparison of PepsiCo to its peers is summarized in the table below:

One of the major challenges to the Coca-Cola company and, to a lesser degree, PepsiCo is the move to tax sugar drinks in an effort to encourage healthier drinking habits. This has led to the adoption of a variety of sugar excise taxes globally, including a single tax rate per beverages containing a certain level of added sugar, graduated tax rate depending on the amount of sugar or a flat tax rate on beverages containing a particular substance/ingredient. Furthermore, the taxes sometimes apply to all beverages (including non-caloric beverages) or beverages containing a certain caloric sweetener. Readers are referred here for more details about current global tax policies. It should be noted that the sugar tax only exists currently in a handful of cities in the United States, though whether this tax will be enacted in other cities/on the Federal level and the ability of beverage producers to pass this cost on to consumers remains to be seen.

Another major challenge to PepsiCo is the competition from private brands. Previous research has shown that private labels can often sell for up to 20-30% less than the corresponding major name brand. Private labels have seen strong growth in sales, with research estimating that 99.9% of consumers purchase some type of store brand. The ability for PepsiCo to produce competitive and superior products will be critical to maintain the company’s market share of its products.

PepsiCo is a staple stock of many investors, and it is not hard to see why. PepsiCo has a diversified business, both in terms of products and geographical sales, that has helped make the company defensible, as reflected in both the stability of its margins and the small decrease in sales during the current economic crisis. This is in contrast to the Coca-Cola company, which, although boasting higher profitability, has transitioned its business towards restaurants/cafes and experienced a significant higher decrease in sales during the last quarter. Furthermore, PepsiCo has plans to expand its business, including increasing international products, continuing to diversify into healthier beverage/food alternatives and with online direct-to-consumer platforms. Finally, the company has a fair current starting dividend yield and is on track on becoming a Dividend King in the next two years.

However, there are challenges that PepsiCo faces. Governments are implementing more excise taxes on unhealthy products, which now includes sugar beverages. Furthermore, private/store brands are growing in popularity and threaten to reduce the market share and margins for sales of key brands of PepsiCo’s products. Additionally, the company is not currently at a discount with an adjusted forward P/E ratio over 25x. Finally, investors may want to keep an eye on the free cash flow of the company, which has steadily been decreasing over the last five years.

Below, I summarize what aspects of the company I’m personally optimistic and pessimistic about. I believe that PepsiCo is a solid company has the potential to provide investors with a long-term source of income, though I would like to purchase the company closer to its historical 22x P/E ratio.

Please check out my video providing a synopsis of PepsiCo: 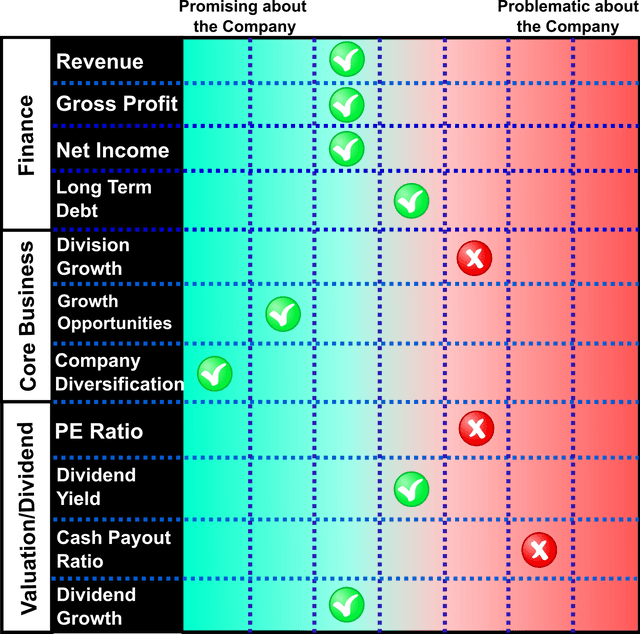 If you enjoyed this article, I would really appreciate your following me (right below the title) and/or pressing “Like this article” just below.