COVID-19 practically shut down business activity and led to millions of workers being displaced. Prior to the pandemic, I thought cyclical industries like oil, housing and autos were vulnerable. They may continue to struggle until the economy fully reopens. That could leave companies like Patrick Industries (PATK) vulnerable. The company is exposed to everything from RVs to manufactured housing to the marine sector. In its most recent quarter, Patrick Industries reported revenue of $424.05 million, down 31% Y/Y. 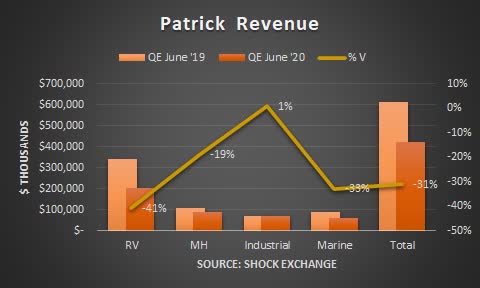 Results for the June quarter were disrupted by COVID-19. In late March and early April, the company temporarily reduced production in certain facilities, which aligned with production cuts with OEM customers. This hurt revenue during the quarter:

Our April and May revenues were down 70% and 27% respectively and up 6% in June. In May, wholesale projection levels began to resume with sequential week-over-week tailwinds building. And in June, we experienced a strong resurgence in production rates particularly in the RV sector with shipments up 11% compared to the prior year and reflecting the need for inventory as a result of retail resilience and a notable increase in consumer demand in particular with new buyers.

Revenue from each of its major product segments fell in the double-digit percentage range, except for the Industrial segment. RV revenue fell 41% Y/Y. It represented 48% of Patrick Industries’ total revenue, down from 56% in the year-earlier period. The company has been making acquisitions to diversify its revenue stream and become less dependent on the RV sector. Year to date, July 2020 RV shipments were down Y/Y by about 10%.

Shipments fell hard in March and April, hampered by knock-on effects of the coronavirus. They grew 11% and 53% in June and July, respectively. Consumers may be using RVs as a way to travel safely without having to take trains or airplanes. If this trend continues, then RV shipments could provide a catalyst for Patrick Industries in the second half of 2020.

Manufactured housing (“MH”) revenue fell in the double-digit percentage range and were negatively impacted by OEM shutdowns during the quarter. The Industrial segment sells kitchen cabinets and retail and commercial fixtures into the housing market. Sales typically tail new housing starts. Rising revenue during the quarter could connote strong housing starts from previous periods. Low interest rates could provide a tailwind for housing and the RV segments. Thus, Patrick Industries’ revenue could stabilize once the economy fully reopens.

The fallout was that EBITDA of $30 million fell 52% Y/Y. EBITDA margin of 7.0% was off 300 basis points versus the year-earlier period. Once revenue stabilizes, Patrick Industries should be better able to absorb fix costs and improve margins. Otherwise, management may have to implement cost containment efforts in order to cut SG&A expense and reduce fixed costs.

Patrick Industries must maintain liquidity in the face of demand destruction in certain of its markets. The company ended the quarter with $111 million in cash. Working capital was $319 million, down from $330 million at year-end. Free cash flow (“FCF”) through the first six months of the year was $28 million, down from $76 million in the year-earlier period. If the business continues to slow, then Patrick Industries should be able to monetize working capital and grow liquidity.

PATK is up over 20% Y/Y. It trades at 11x run rate EBITDA (first-half EBITDA annualized), yet EBITDA appears depressed. The stock has benefited from the melt-up in financial markets. I rate PATK a Hold.

Would You Go To China on Business Now?
Lennar Corporation (LEN) CEO Rick Beckwitt on Q1 2020 Results - Earnings Call Transcript
Xiaomi's Phones Are Much Cheaper Than Apple's, But Its Valuation Isn't (OTCMKTS:XIACY)
Berkshire Hathaway: Invest In The Pioneering MMA Champion Of The Investment World (NYSE:BRK.A)
Revisiting Tyme Technologies (NASDAQ:TYME)
Bond yields are surging, and the scary recession warning everyone was talking about has gone away
Apellis Trial Progress And Other News: The Good, Bad And Ugly Of Biopharma (NASDAQ:APLS)
Yellow Pages, Ltd. - A Melting Ice Cube In An Enviable Financial Position (OTCMKTS:YLWDF)