Back in August, I wrote about both

This is good for both gold and bitcoin, in my view. When we look at the money stock, we see that, despite the recent slowing of the M2 expansion, we are still grinding higher.

To provide more context on these increases, we need to look at these moves with historical context viewed through percentage change.

The average monthly M2 increase from January 2010 through December 2019 was 0.5%. With the exception of August, we have eclipsed that pace every single month since March when the pandemic became a national concern. Since what the Fed describes as money stock is increasing at a faster pace than historical norms, we can begin to understand why the supply of bitcoin and gold becomes very important.

If you’re an avid bitcoin investor, chances are you’ve seen the stories about how new entrants into the space are buying up the new supply of bitcoin. PayPal (NASDAQ:PYPL) just entered the crypto arena. We know Grayscale has been a big buyer. There is a clear investment demand for bitcoin driving much of this price action. 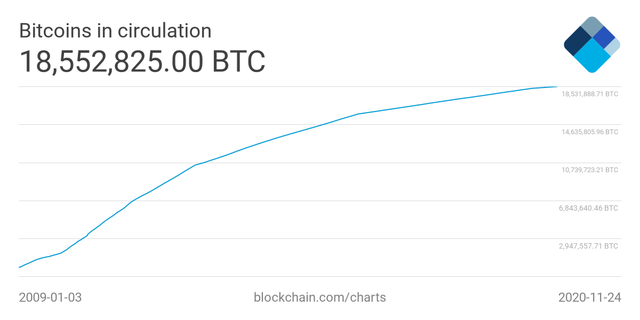 Since new bitcoin mining supply is designed to slow substantially over time, this presents a supply problem. New investment demand creates a challenging supply crunch issue that will ultimately propel the cryptocurrency much higher.

While not identical, gold is dealing with a supply situation as well. According to the World Gold Council, investment demand for gold is now substantially higher than it has been over the last ten years. 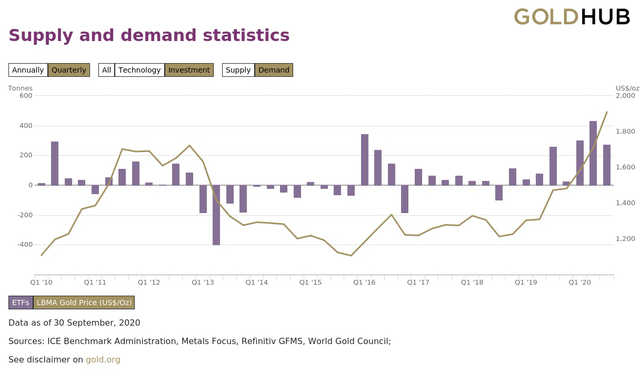 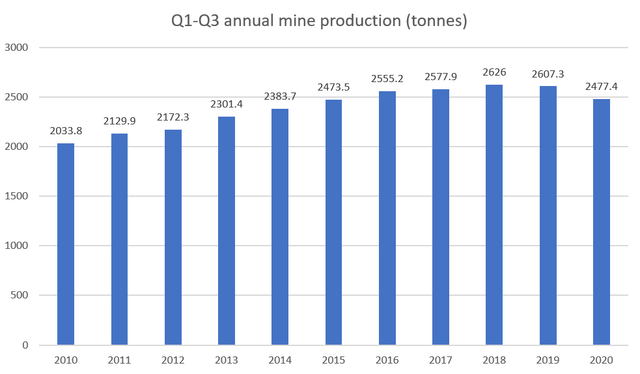 Even before the pandemic caused mine closures in Q2 of this year, you could make the case gold mine production peaked in 2018.

I want to revisit the monthly chart that I shared for bitcoin back in August and provide some new insight into how I’m playing this trade. 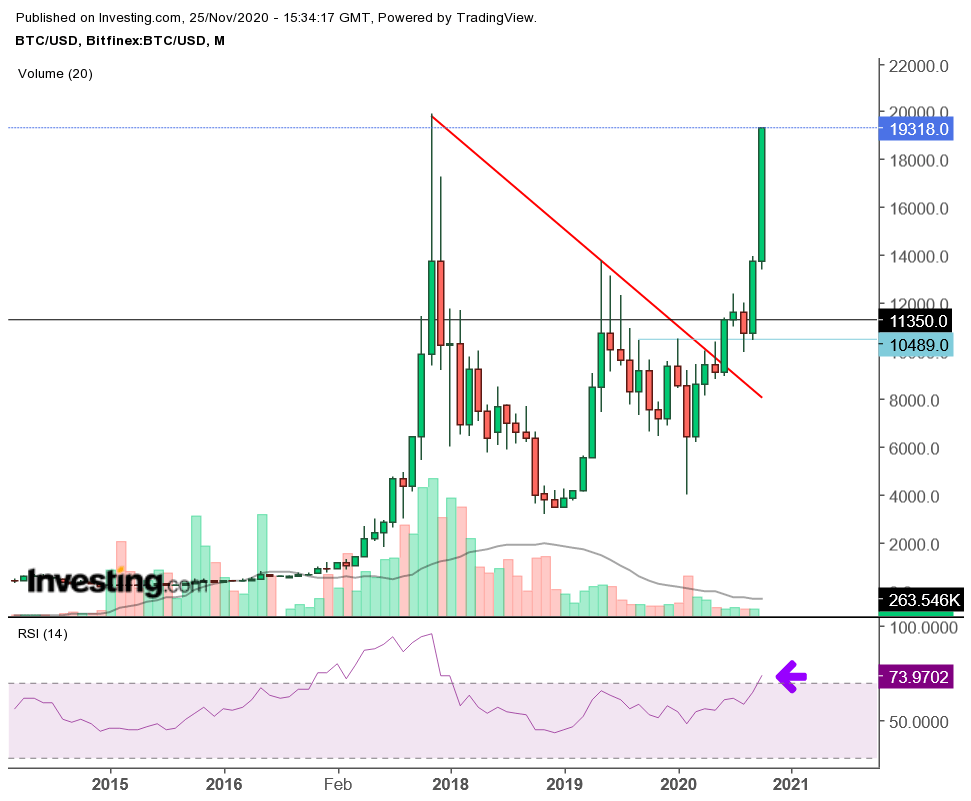 Bitcoin is now overbought on the monthly chart after what has been essentially a straight up rise since the beginning of October. Looking back to 2017, you’ll notice overbought can last a very long time. I’m absolutely not saying to sell all of your bitcoin today. I’m just saying this rally might be a nice time to take a little bit off and put that profit in gold. This is what the weekly chart looks like. 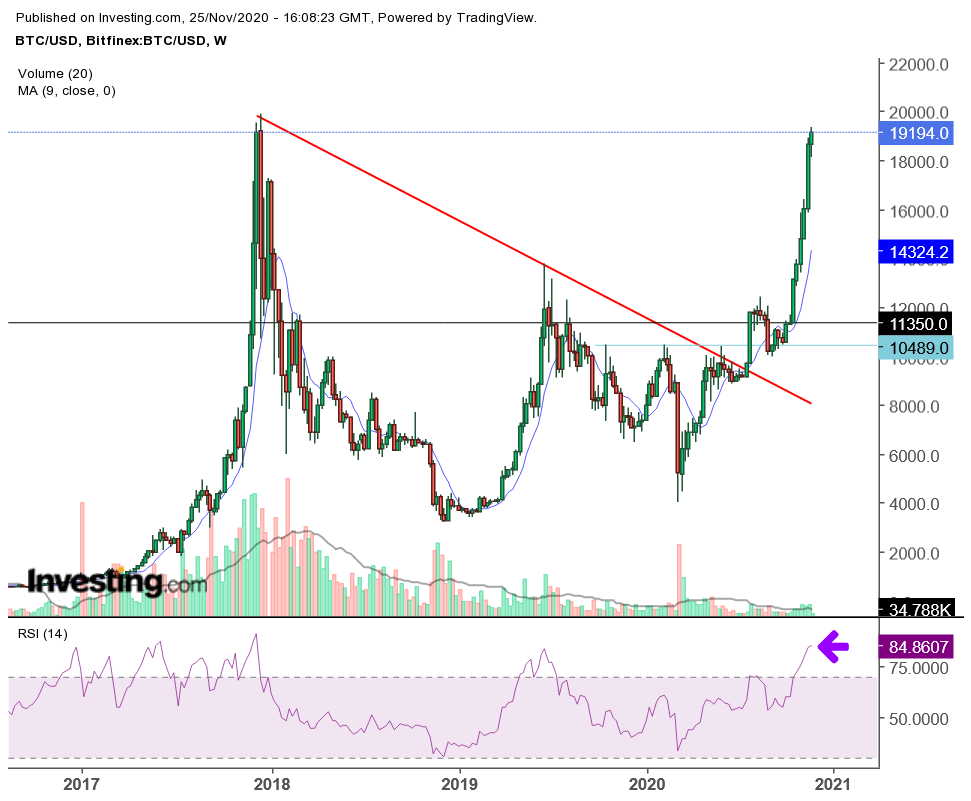 On a weekly timescale, this current level on the RSI is the most overbought bitcoin has been since December 2017, right before the 12-month selloff. I don’t think bitcoin is about to sell off for the next 12 months. But we have not seen a meaningful pullback in bitcoin since early September. We are due. We have, however, seen a nice pullback in gold over the last few months. This is what I said about the two assets back in my August bitcoin note:

As a longer term swing trader and investor, Bitcoin looks fantastic to me right here. Gold, on the other hand, looks positioned for a pullback.

Today, I’m seeing the opposite. We’ve now had about a 13% decline in gold since the August peak. 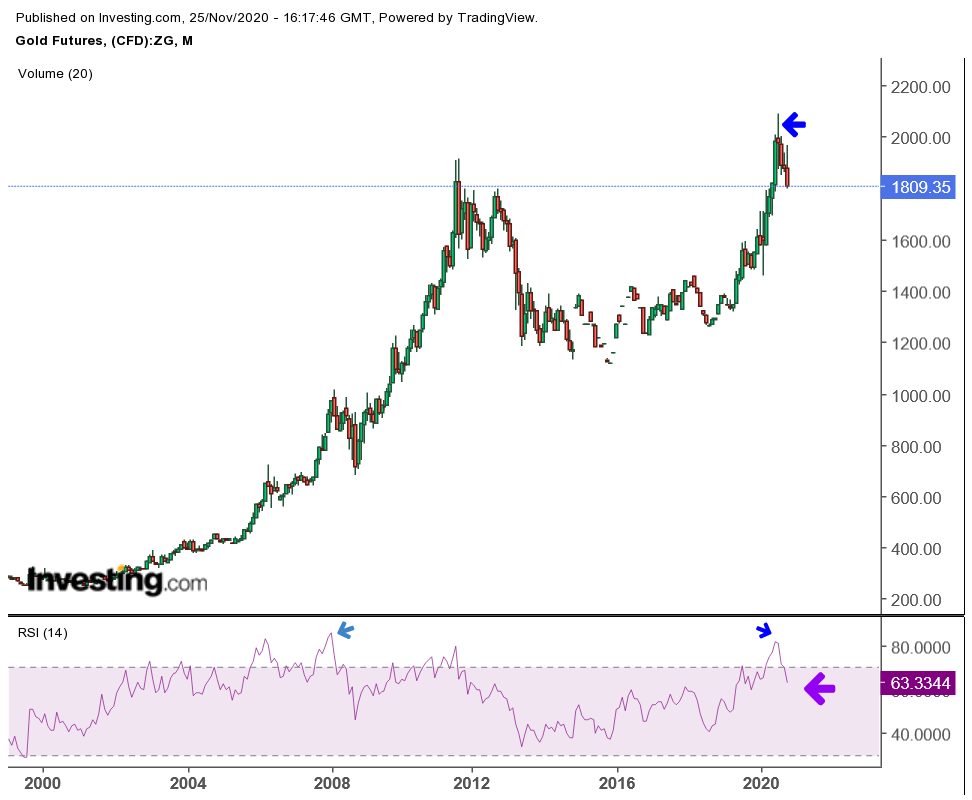 Gold is no longer overbought on the monthly timescale after a healthy dip. The weekly view actually shows a buy opportunity. 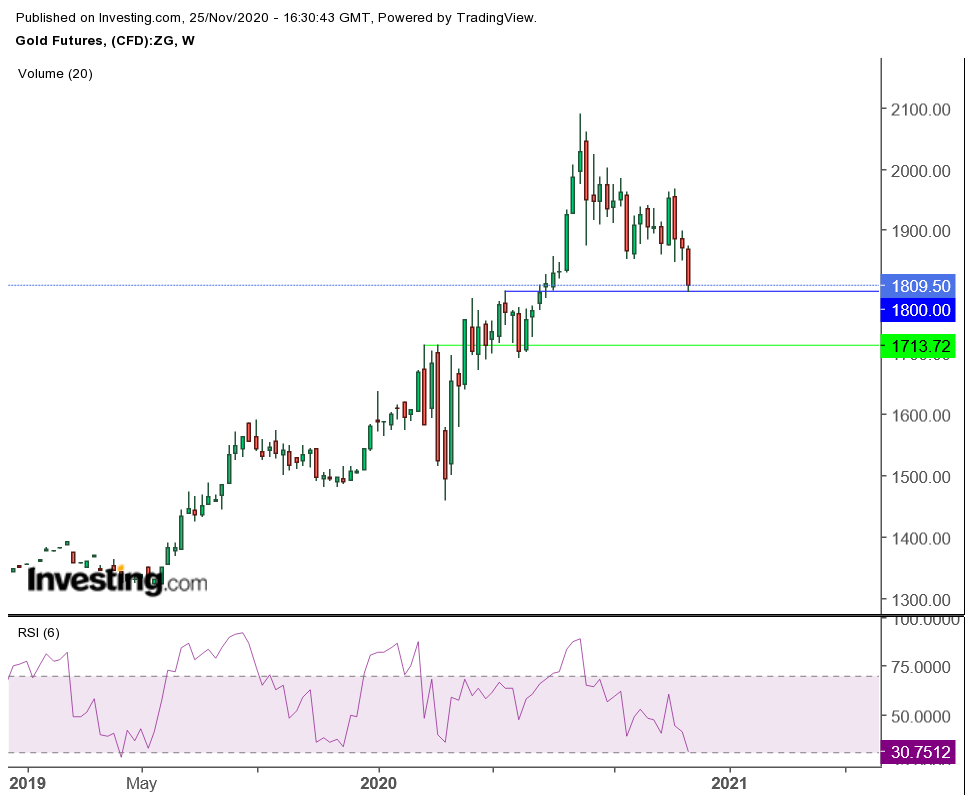 I’ve adjusted the RSI from 14 to 6 to give you an idea of context over the last two years. Generally, when the RSI-6 gets down to the level that it is currently at, it’s a pretty good indicator of a new bottom either being in or being close. I view $1,800/oz gold as a pretty good support zone. I wouldn’t totally rule out $1,715, but I’d see that price area as very temporary and very safe to add.

Bitcoin is ultimately going much higher in my estimation. I still believe that. I’m still very long. But I have shaved my holdings by close to half in the last 3 to 5 days. As I’ve said, it’s simply due for a pullback. That pullback may not come before a new all-time high. In my August note, I predicted a new all-time high within 6 to 12 months of publishing. That target potentially getting hit in half the expected time is beyond what I saw as possible. I believe it speaks to the aggressiveness of the move in the last two months. To be clear, it is entirely possible if not probable a new all-time high comes before the pullback. It could legitimately come before this article is even published. The new high is coming. The pullback is too. I believe that pullback will be a great opportunity to scale back into a more robust position. Until that opportunity presents itself, I’m putting some of that capital back into good old-fashioned gold.

Disclosure: I am/we are long BTC-USD, XAUUSD:CUR. I wrote this article myself, and it expresses my own opinions. I am not receiving compensation for it (other than from Seeking Alpha). I have no business relationship with any company whose stock is mentioned in this article.

Additional disclosure: I’m not an investment professional. Do your own due diligence.