This month’s article will outline why I will again remain 100% allocated to the SPDR S&P 500 Trust ETF (SPY) with my retirement assets in August. First let me review my performance in July. All of the ETFs I monitor moved higher in July, though Table 1 shows that SPY almost more than doubled the return of all the other ETFs. The market, as measured by the S&P 500 index, rose 5.51%. As for my pension plan assets, I had a slightly higher gain of 5.89% in July, which equaled the return of SPY. My investment objective of preserving my capital was met, and I beat the overall market as measured by the SP 500 index. Table 1 below shows my returns and allocations for the month of July and Table 2 below shows my returns for the past 12 months. 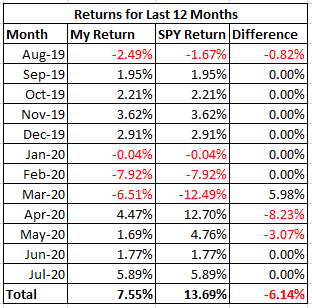 To review the purpose of this series of articles, my retirement account only allows me to buy the following four ETFs: iShares Core U.S. Aggregate Bond ETF (AGG) , SPDR S&P 500 Trust ETF (SPY), iShares Russell 2000 ETF (IWM), and iShares MSCI EAFE ETF (EFA). I can also have my money in cash. The question is how to decide where and when to allocate money to these various ETFs.

You can see that the moving average crossover system provided some excellent long-term Buy and Sell signals that would have allowed investors to capture long-duration moves in the index, while avoiding costly drawdowns. Avoiding these costly drawdowns allows me to meet the objective of capital preservation.

I employ this strategy because I do not want to experience a large drawdown with my pension assets. During the 2008-2009 market crash, many people didn’t even look at their retirement statements because they were afraid of what they would find. I submit that if those people would have used a market strategy similar to what I outline in this series of articles, they would have been able to avoid much of the decline during the bear market and, consequently, would have had less emotional stress during that time period.

The following charts show the current status of the ETFs that I am allowed to buy in my retirement account.

SPY gained 5.89% in July. SPY remains above both of the moving averages. The moving averages remain in bullish alignment and are starting to separate more, which is bullish. SPY remains above the dashed green line mentioned in last month’s article. It is a support and resistance level. It is currently acting as support, since SPY remains above this price level. Lastly, SPY had a very strong bullish candle and closed at a new high. What is not to like? Well, volume for the month was very low. Often, the summer months have lower volume, so perhaps it is not too much to worry about. SPY is bullish, and my money will remain in SPY for August.

IWM rose again climbing 2.92% in July. It was the fourth month in a row that IWM had a positive gain. Another positive development is that IWM closed above the opening price in March. In other words, it has recaptured the March loss. IWM remains above its six- and ten-month moving averages, however, those moving averages remain in bearish alignment.

IWM underperformed SPY by 2.80% in July. Small-cap stocks just can’t outperform the large-cap tech stocks at this time. Not much has changed from previous comments. Before I allocate money to IWM instead of SPY, I need to see this ratio close above its 10-month moving average. Once that happens, then it may be prudent allocate of portion of my retirement funds to IWM. I will continue to monitor this ratio.

EFA gained 1.94% in July. My following comments for EFA are just like my comments for IWM. EFA rose for the fourth consecutive month, which is bullish. It closed above the opening price in the month of March, meaning that the fund recaptured the March loss. EFA closed above and remained above its six- and ten-month moving averages, which is bullish. Unfortunately, the two moving averages remain in bearish alignment. With EFA being in bearish alignment, I won’t allocate any of my retirement funds to EFA.

Chart 6 shows that EFA underperformed SPY by 3.73% in July. Nothing has changed on this chart. The ratio remains below both moving averages and the two moving averages remain in bearish alignment. The ratio has made a new low. As a proponent of trend-following, I will wait until I see more improvement in this ratio before I allocate money to EFA over SPY. I will continue to review this ratio looking, for the ratio to close above its 10-month moving average before I consider adding money to EFA.

EFA underperformed IWM in July by 0.95%. The ratio remains inside the green box. Neither ETF can gain on the other. At this time, there is no compelling reason to invest in EFA over IWM. I will continue to monitor this ratio.

Chart 8 shows that AGG rose a solid 1.33% in July. Ever since the fund broke out of the box identified in green, it has steadily climbed higher. As a matter of fact, had you bought in February 2019, which is the month after it broke above the green box, you would be up about 16%. Not too bad for following the trend. AGG closed at another high and remains in bullish alignment.

Chart 9 shows that AGG underperformed SPY by 4.30% in July. The ratio is now below both the six- and the ten-month moving averages, which are turning lower and will soon be in bearish alignment. So, while Chart 8 above shows a nice steady bullish trend, Chart 9 shows me why I can’t place money in AGG. Investors prefer equities over bonds at this point in the economic cycle. Maybe that is going to change, but for now, there will be no money allocated to AGG. I will continue to monitor this ratio and look for evidence of a change in investor preferences.

In summary, all four of the ETFs I monitor rose as the bull market continued to advance. Clearly, SPY was the big gainer for the month of July. EFA and IWM both performed well, and both of them remain above their ten-month moving averages, which is bullish. Both ETFs also closed above the opening price in March. It took four months for EFA and IWM to recapture the March loss. Both EFA and IWM remain in bearish alignment. SPY continues to be bullish and closed at a new high. It remains in bullish alignment and above the recent area of resistance. AGG rose for the month of July, but the fund lags SPY in terms of overall performance. I will continue to allocate 100% of my money to SPY, as it is in bullish alignment, while IWM and EFA are in bearish alignment.

Disclosure: I am/we are long SPY. I wrote this article myself, and it expresses my own opinions. I am not receiving compensation for it (other than from Seeking Alpha). I have no business relationship with any company whose stock is mentioned in this article.