Midas Gold (OTCQX:MDRPF) is a Canadian company developing a gold-antimony mine in Idaho. The resources contain more than 6.5 million toz gold, 10 million toz silver, and 220 million lb antimony. The permitting process is well underway, with final permits expected next year, and feasibility should be released later this year. Also the shareholder base is pretty strong, with 72% of outstanding shares held by institutions and insiders. The problem is the expected initial CAPEX that should be close to $1 billion, and some investors may be discouraged also by the convertible debt of $81.7 million, convertible at very low conversion prices which almost warrants significant share dilution. These are probably the main reasons why Midas Gold’s share price is approximately 50% down over the last 2 years, although the gold price is 40% up over the same time period.

Midas Gold is fully focused on the development of its Idaho-located Stibnite project. It is a brownfield project, as Stibnite was in production during the majority of the 20th century. It was the main U.S. source of antimony and tungsten during World War II. The mining operations ceased only in 1996. But there is still a lot of gold and antimony left.

A PFS was prepared for the Stibnite project back in 2014. Although it is already dated, it can provide a picture of what to expect from the feasibility study that should be completed later this year. The PFS envisioned an average annual production of 337,000 toz gold and 8.3 million lb antimony, over the 12-year mine life. Over the first four years, the average annual production was projected at 388,000 toz gold and 14 million lb antimony. The AISC should be only $616/toz gold over the mine life and $526/toz gold over the first four years of production. The initial CAPEX was estimated at $970 million. At a base-case gold price of $1,350/toz, the resulting after-tax NPV(5%) was calculated at $832 million and the after-tax IRR at 19.3%. 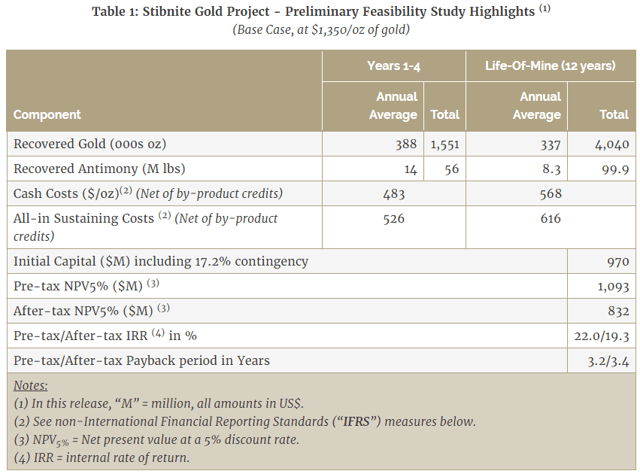 It is the initial CAPEX that may be pretty problematic for Midas Gold. Back in 2014, it was estimated at $970 million. This number also includes a 17.2% contingency. But even without the contingency, it equals almost $830 million. Midas Gold will probably try to push the CAPEX lower in the PFS; however, some costs have increased since 2014. As a result, it is hard to expect any meaningful decline in the initial CAPEX estimate. This is a problem, as Midas Gold has a market capitalization of only $106 million. Financing the initial CAPEX is clearly out of its reach right now. Although the economics are good and a big portion of CAPEX should be financeable via debt or a gold stream, the equity portion of the financing package would lead to a huge share dilution at the current share prices.

It is highly probable that Midas Gold will develop the mine together with a joint-venture partner. Or that it will get acquired before the mine construction starts, probably as soon as the feasibility study is completed and the final permits are obtained. The most probable partner/acquirer is Barrick Gold (GOLD). The gold mining giant already owns 20% of Midas Gold’s outstanding shares. But the key to acquiring Midas Gold is Paulson & Co. and the convertible notes it holds.

The permitting process is well underway with final permits expected next year. The mine re-development plan also includes a plan to eliminate the environmental damages caused by the original mining operation, which is the reason why Midas Gold has the support of local people as well as the politicians. Therefore, obtaining the permits shouldn’t be an issue. The underperformance of Midas Gold’s share price is attributable especially to the high CAPEX and to the convertible debt and related share dilution. 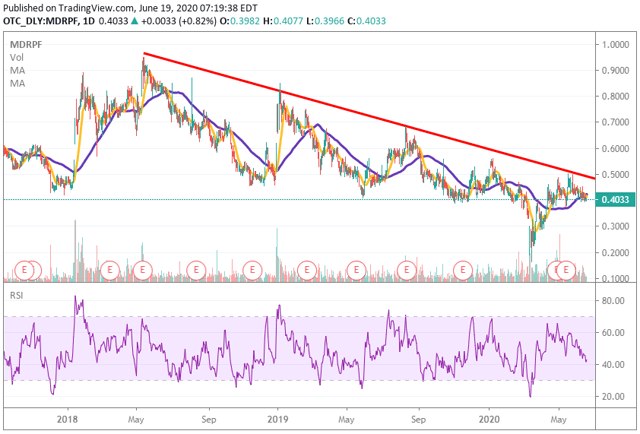 Although there are several fundamental catalysts, like the feasibility study and the permitting on the horizon, Midas Gold’s technical picture doesn’t look good. The share price is in a long-term downtrend that started back in 2018. Since then, Midas created 4 new lower highs and lower lows. The recent bottom was reached at $0.16, on March 16. After the share price bottomed, strong growth followed, but Midas Gold was unable to break the bearish trend line and bounced back down. Its share price stands at $0.4 now, but it declined below the 10-day, as well as the 50-day moving average. Moreover, the 10-day moving average crossed the 50-day one to the downside, which is another bearish signal.

Midas Gold is an interesting company with an interesting project. However, it has to face several issues. First of all, it is poised for a significant share dilution. And the Stibnite initial CAPEX will be most probably out of its reach, forcing the company to find a joint-venture partner or an acquirer. These factors weigh on Midas Gold’s share price that is in a long-term bear trend, despite the positive gold price development. Also the technical picture doesn’t look good, more weakness is very probable in the near term. Midas Gold is definitely worth a look, but the potential investors should be patient and wait for the results of the feasibility study and/or for the breakage of the long-term bearish trend line before initiating a position.