McEwen Mining had a rough Q2 report with the Black Fox operations temporarily suspended in Canada, Gold Bar voluntarily suspended in Nevada, and the company’s 49% owned San Jose Mine in Argentina hit with a mandatory quarantine as well. However, all mines were successfully restarted heading into Q3, and investors had some hope that the company would be able to show a strong recovery sequentially from the 19,200 gold-equivalent ounces [GEOs] produced in Q2.

Unfortunately, while we did see an improvement, the Q3 results production results were not anything to write home about. Gold-equivalent production in Q3 came in at a dismal 30,400 ounces, a 33% decline from the year-ago period, which has left year-to-date production at just 84,600 ounces, 35% below where GEO production sat at the same time last year. Meanwhile, added dilution has made it even harder to generate positive annual earnings per share [EPS] with yet another capital raise this year near multi-year lows. Let’s take a closer look at the results below: 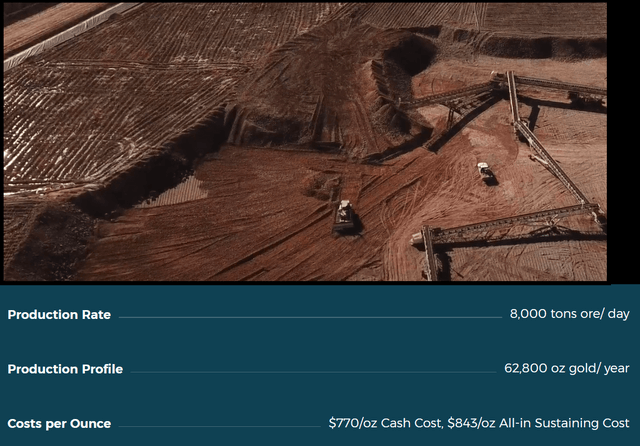 Beginning with the company’s newest Gold Bar Mine in Nevada, we saw quarterly production of 6,800 GEOs: an 11% increase from the 6,100 GEOs produced in Q2. While some investors might be applauding these results, it’s important to note that these results are a country mile away from what was expected in the 2018 Feasibility Study, which called for 62,800~ ounces of gold production per year, or a run-rate of 15,700 GEOs per quarter. Year-to-date, Gold Bar has produced just 22,000 GEOs, and this is contributing to much higher costs relative to the projected all-in sustaining costs of $843/oz. Given that gold sales are unlikely to come in above 35,000 ounces in FY2020, I would expect another year of costs above $1,275/oz (FY2019 costs: $1,282/oz). In fact, I would be surprised if costs came in below $1,650/oz in FY2020 at Gold Bar. This means that the mine is unlikely to generate much free-cash-flow at all for its second year in operation.

McEwen Mining is currently working on an updated Feasibility Study and reserve estimate for the Gold Bar Mine, after an $83~ million write-down on the mine earlier this year. While many new gold mines have their hiccup early on, Gold Bar has taken the cake for the worst start to a mine life in years, with costs for the first six months of FY2020 coming in at $2,293/oz, an 86% increase from the same period last year when commercial production began. As the chart above shows, the lower than planned production leading to lower gold sales is not ideal, as these resulting high costs have wiped out all of the benefits of the higher gold price. We should have a better idea by year-end how Gold Bar looks with the updated economic study, but I would take the economics with a grain of salt until we see actual results as this mine has been a headache from the start.

Moving over to the company’s Black Fox Mine, it wasn’t a very exciting quarter here either, with quarterly production of just 5,800 GEOs, down 20% from the same period last year. As the chart below shows, quarterly gold production has been steadily trending lower for two years now, with this being the second-worst quarter since McEwen Mining acquired the mine in late 2017 for $35 million. The company continues to develop underground access to the Froome deposit, which lies less than a kilometer west of Black Fox. The hope is to reach the deposit by Q2 2021 and achieve commercial production by Q4 2021.

Some investors might be excited by the move to mining the Froome deposit as it has more consistent mineralization than the current mining area, and the company can utilize lower-cost bulk mining methods to mine Froome. The grades are quite impressive at Froome Underground, with a measured & indicated resource of 181,000 ounces at 5.09 grams per tonne gold. This is only slightly below the grades at Black Fox but well above the most recent grades at Black Fox, which have continued to trend down over the years.

If we look at the chart above, which shows quarterly throughput and gold grades, we can see a clear downtrend in gold grades from 6.47 grams per tonne gold in Q4 2017 to 3.53 grams per tonne gold in Q1 2020. Meanwhile, tonnes processed have also trended lower in the same period, and the mine operated below guidance last year, with 35,700 GEOs produced, well below the outlook of 50,000 GEOs. Therefore, while there is no disputing that the company continues to produce solid exploration results from the mine, and Froome is exciting, it’s important to note that grades have consistently come in well below the reserve grade of 5.78 grams per tonne gold over the past year. For this reason, I would not get too excited about exploration results or the shift to mining at Froome until we see what actual production looks like. I say this because Black Fox has looked great on paper for years, and at the time of the acquisition, but it’s never delivered. In fact, it has never come close to producing the 62,000 ounces per year it was producing before McEwen Mining acquired it. I have chosen to ignore the Q2 2020 results when pointing out the downtrend in feed grades due to the government-mandated shutdown, which presented a significant headwind due to fewer tonnes mined. 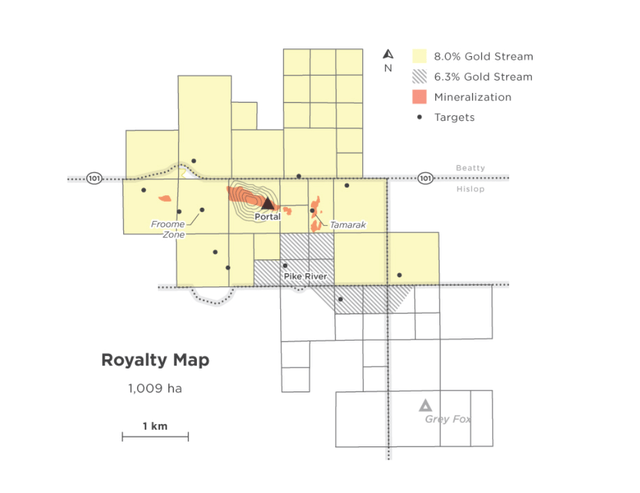 It’s worth noting that while feed grades coming in significantly below the reserve grade has not helped matters, the real issue for Black Fox is costs. Black Fox’s all-in sustaining costs of $1,225/oz last year were well above the industry average for gold producers, and these costs are affected by the massive 8% gold stream on the project held by Sandstorm Gold (SAND). This 8% stream covers the Froome Zone and the current mining area at Black Fox, so while grades might be better at Froome and mining might be more straight-forward, I would be surprised if costs came in below $1,050/oz at Black Fox, even after benefiting from mining at Froome. Currently, the stream is in place until 2090, and McEwen Mining is obligated to sell 8% of gold production at the lesser of the market price of $550 per ounce. 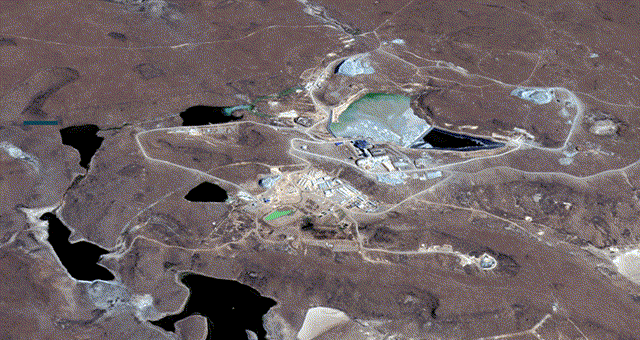 Finally, at the company’s 49% owned San Jose Mine, it wasn’t a great quarter either, with quarterly production of 15,900 GEOs, which is down 34% from the same period last year. The weaker results are because the company continues to operate below capacity due to government-imposed COVID-19 travel restrictions, which has made it challenging to get personnel to the site. Given that Argentina is now in the top-10 countries for most cases worldwide, I wouldn’t expect Q4 to be much better for the mine. This is not ideal as San Jose is the largest contributor to McEwen’s production profile, with 53% of McEwen Mining’s consolidated GEO production coming from the mine last year. 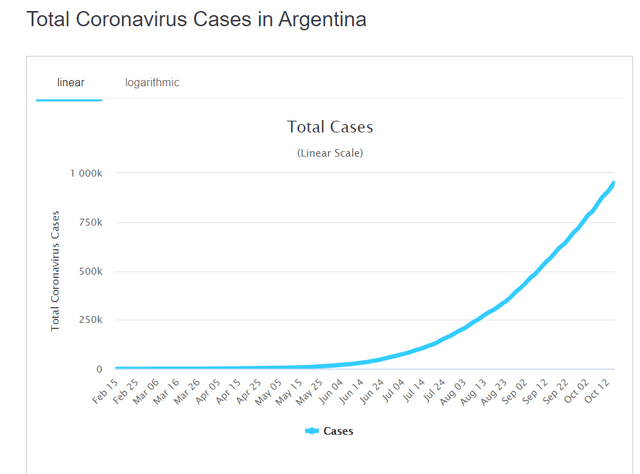 Given the weak operating results year-to-date, it’s no surprise that McEwen Mining’s earnings trend continues to be the worst in the sector, with more net losses per share expected this year. While a narrowing of net losses per share would at least be excusable, this isn’t the case at all, as this is the fourth year in a row of net losses, and they’ve only widened since FY2017. Some investors will take solace in the fact that FY2021 annual EPS estimates are firmly in positive territory at $0.09. Still, even if the company reports this figure, it’s trading at 12x FY2021 earnings estimates. Currently, Kirkland Lake Gold (KL) trades at 11x FY-2021 earnings with a fortress-like balance sheet, better margins, safer jurisdictions, a larger production profile, and an active buyback program. Therefore, there are clearly much better opportunities out there, even if McEwen Mining hits next year’s estimates.

Some investors might argue that the stock is simply too cheap here, and the upside is enormous given the 5-year plan that’s now found its way in the new corporate presentation. This plan suggests that the company might be able to increase annual gold production to 300,000 ounces per year by FY2023, which would be a 60% plus increase from FY2019 levels. However, it’s important to note that the company is not one to meet its targets, with last year’s guidance missing by a miserable 21% at 174,400 GEOs vs. guidance of 210,000 GEOs. Besides, we’ve heard this same plan before almost a decade ago, and it never came to fruition. 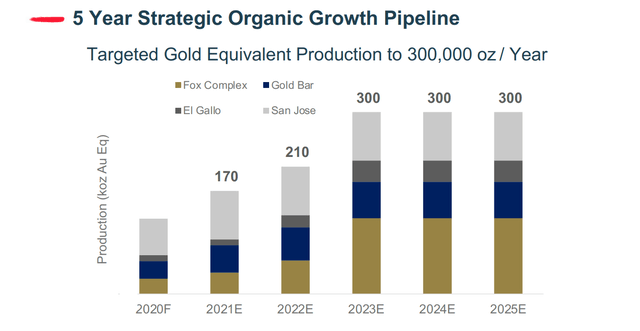 As shown below in the 2012 corporate presentation, the hope was to increase gold production to 290,000 ounces per year by FY2015, with Gold Bar and El Gallo 2 providing the fuel for this growth. Instead, the company went out and purchased Black Fox off a near-bankrupt Primero Mining, has seen a horrid start to commercial production at Gold Bar, and five years after the target date, we’re still nowhere near 290,000 ounces of gold production. While COVID-19 has certainly not helped matters, this year’s pandemic was not to blame for the past two years of underperformance and serial share dilution, with the share count now creeping up to over 405 million shares as of the end of September. Therefore, while these promises might look exciting, I don’t see any reason to put any weight into them until we see the company finally start meeting its current targets at a bare minimum. 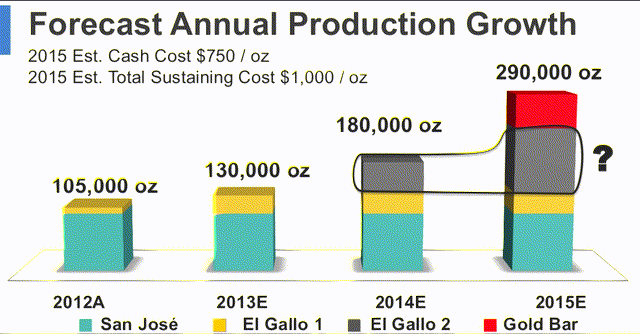 McEwen Mining has set forth new hopes of becoming a 300,000-ounce producer by FY2023, but it’s important to examine history to judge whether the company is likely to achieve this goal. To date, the company’s execution has been uninspiring, and an investment in McEwen Mining is more an investment in an explorer than a gold producer. This is because the company does not generate free-cash-flow, dilutes faster than most gold juniors, and burns cash at a similar pace. Therefore, for investors looking to put some money to work in the index, I believe proven gold companies like Kirkland Lake Gold (KL) that continually under-promise and over-deliver and actively reduce their share count through buybacks are better options. A rising gold price should lift all boats, but I would view any rallies to the $1.50 level as opportunities to exit the stock.

Disclosure: I am/we are long GLD, KL. I wrote this article myself, and it expresses my own opinions. I am not receiving compensation for it (other than from Seeking Alpha). I have no business relationship with any company whose stock is mentioned in this article.