To say that the global economy has been in distress as the COVID-19 crisis continues to unfold would be an understatement.

Although data has been contradictory and, at times, pointed in the direction of a strong rebound over the past several weeks, the key metrics used to measure the state of the economy clearly suggest that we are not out of the woods. From consumer spending and confidence to industrial output and employment, the second quarter of 2020 has fallen well short of last year’s levels.

The economic recovery has been happening, but slowly and off a deeply depressed March and April base that was distorted by widespread but temporary business shutdowns. Certain sectors and demographic groups have been suffering disproportionately more from the crisis, while a few others have even thrived in the current environment.

To combat the massive headwinds, federal governments and central banks have been stepping up to the plate. In the US, the Treasury department has filled most of the gap in household income, a move that is expected to push the budget deficit from unusually large in 2019 to highest ever in 2020.

On the other side of the fence, the Federal Reserve has assumed a key role in providing liquidity to the markets. It has expanded the reach of its quantitative easing program to include longer-term treasuries, bond funds and even individual corporate debt within the mandate. As a result, yields remained in check, and even so-called real assets like gold and real estate seem to have benefited from the lavish supply of capital.

The dichotomy between very fragile economic fundamentals and generous fiscal and monetary policy has created a unique dynamic in the markets. For starters, almost all major asset classes – from stocks (SPY) to bonds (TLT)(IEF) to gold (GLD) and commodities (DBC) – managed to finish the second quarter of 2020 higher and near peak levels, despite all the challenges.

Even more interestingly, rising asset prices have come alongside high levels of volatility, which is historically unusual. Case in point, the S&P 500 lost more than 5% of its value on a single day in June after being less than 5% off all-time highs earlier that same week. Something like it had only happened four times in post-Depression history, and not once since the dot-com bubble days.

The histogram below paints a similar picture. Even though investors have been counting down to a fresh peak in the S&P 500 index, the 30-day average volatility at the end of June 2020 remained remarkably elevated. In fact, equity prices have been more jittery recently than they were when Lehman Brothers collapsed, in 2008, and immediately following the attacks of 9/11. 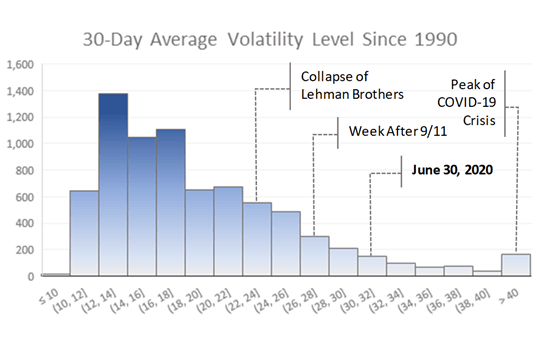 Because of this push-and-pull dynamic between bulls and bears, placing bold bets in the market as of late has been imprudent, in my view. While I continue to believe in the three pillars of a successful growth investment strategy – broad diversification, controlled use of leverage and low tolerance for sizable losses – a portfolio’s conservative profile in the second quarter seemed most appropriate, given the market landscape.

If you would like to receive more content from DM Martins Research on a regular basis, please follow me on Seeking Alpha and check the “get e-mail alerts” box. Thanks for your support.