After years of continuously holding shares in BP (BP), sadly it was recently time to let go and move onto new investments. The final straw was their terrible new shareholder returns policy that chokes the desirability of their shares, as discussed in my previous article. It feels timely to discuss the four primary reasons that British American Tobacco (BTI) provides a superior contrarian dividend investment that has replaced BP.

It should come as no surprise that the first reason stems from their superior shareholder returns policy since it was the core reason for divesting my BP shares. Since this topic has already been discussed in both of my previously linked articles, this recap will be kept brief and suffice to say that whilst each investor is entitled to their own views, in my eyes this new policy is simply the worst shareholder returns policy possible.

They are indicating that instead of increasing their dividends as oil prices increase, they will instead increase their share buybacks and thus buy more shares when prices are at cyclical highs, as the graph included below displays. I personally see little value in free cash flow that is directed towards share buybacks for a company with highly cyclical earnings and thus this suppresses their intrinsic value. 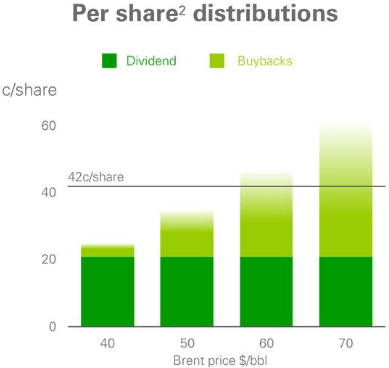 On the other hand, British American Tobacco is remaining committed to their traditional progressive dividend policy that is essentially the same as the one that BP replaced, as the slide included below displays. This aims to at least maintain and preferably increase their dividends each year in line with any future earnings growth. Whilst they may potentially conduct share buybacks in the future, the important difference is that their preferred path to return capital to shareholders is through dividends and not share buybacks that have a questionable track history of creating value.

Admittedly, there is one disadvantage of holding British American Tobacco compared to BP for United States-based investors, being that their dividend is declared in GBP, not USD. This means that they are directly exposed to changes in the GBP to USD exchange rate and thus each quarter their dividend will vary. But since these are both hard currencies, the fluctuations should be manageable for an investor with a diversified portfolio.

A progressive dividend policy may be all well and good but to actually be successful in the long term, the company obviously must support these intentions with solid financial performance, which forms the basis for the second reason. The Covid-19 inspired economic downturn has been very tough for many companies across virtually every industry and this certainly was no different for BP which has faced a massive impact to their earnings. On the flip side, this time has been relatively smooth for British American Tobacco which saw their revenue stay broadly unchanged year on year during the first half of 2020, whilst their operating cash flow surged higher simultaneously, as the graph included below displays. Even though the latter was partly due to lower tax payments, this stark difference still increases their relative attractiveness as a dividend investment. 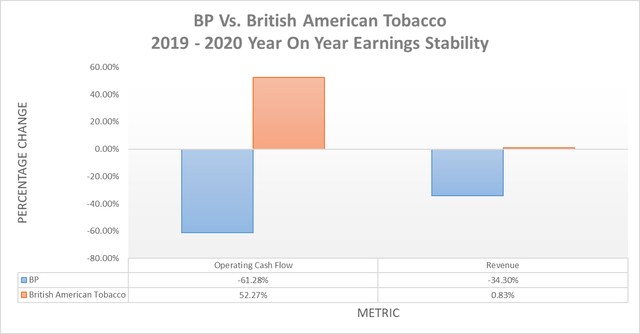 Even though a history of steady earnings is desirable, investment returns will always depend upon their long-term future and whilst British American Tobacco is facing a long-term secular decline in tobacco demand, their relative future still seems desirable. This might seem rather odd at first, since virtually everyone knows that tobacco demand has been steadily declining for years whilst global energy demand should continue growing as the world advances.

The core issue for the long-term future of BP is not total energy demand, but rather the uncertainties stemming from the transitions away from fossil fuels towards clean renewable energy. Whilst everyone knows this is underway, no one knows for certain how quickly it will transpire, whereas the situation for the tobacco industry is already established and steady.

When looking further ahead, fossil fuels are unlikely to handle declining demand in the same resilient manner as tobacco, as per my previous article and whilst that article focused on Exxon Mobil (XOM), the same logic can still be applied to BP. This means that BP will not be a cash cow like British American Tobacco and thus has to push ahead with their clean renewable energy investments. Although these should prop up their earnings in the long term and ensure they remain a going concern, they obviously come at a significant cost that will weigh on their free cash flow even before considering the unproven returns on these investments.

The primary purpose of investing is to acquire assets for a price that is below their intrinsic values and thus generate alpha. Since the focus on this article is for long-term income investors and not short-term traders, their intrinsic values were estimated by using a discounted cash flow valuation that simply replaces their free cash flow with their dividend payments.

Since BP does not plan to increase their dividends, it was only natural for the valuation scenario to foresee them remaining unchanged perpetually into the future. Meanwhile, to ensure this relative valuation remains conservative, the exact same scenario was assumed for British American Tobacco, which should provide a margin of safety to account for their long-term secular decline faced by tobacco demand.

To illustrate the results, a Monte Carlo Simulation has been provided with a wide range of 121 different cost of equity assumptions for both individual scenarios. It can be seen in the graph included below that their individual splits between intrinsic values above and below their current share price are more favorable for British American Tobacco than BP. These are very impressive results for the former and thus indicate that their shareholders face less downside risk even if they too never grow their dividends. 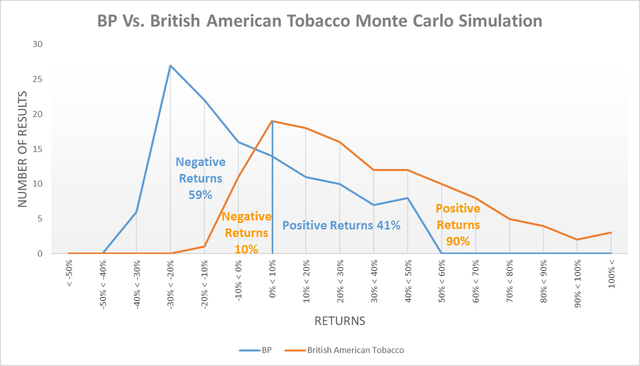 The Monte Carlo Simulation utilized a wide range of 121 different cost of equity assumptions, which include expected market returns from 5% to 10% and risk-free rates from 0% to 5%, both of which used 0.5% increments. The 60M Betas utilized were 1.09 (SA) for BP and 0.71 (SA) for British American Tobacco. The GBP to USD exchange rate was assumed to average 1.30.

Admittedly BP could possibly provide a more desirable investment for those investors seeking short-term trading opportunities to capitalize on any recovery in oil prices. But for other investors such as myself who are focused on long-term income, this is not the case. British American Tobacco offers a superior shareholder returns policy that is better supported in the short and long term, along with a higher probability of seeing positive returns. Following this analysis, I will be maintaining my neutral rating for BP and very bullish rating for British American Tobacco.

Notes: Unless specified otherwise, all figures in this article were taken from BP’s Second Quarter 2020 and British American Tobacco’s First Half 2020 reports, all calculated figures were performed by the author.

Disclosure: I am/we are long BTI. I wrote this article myself, and it expresses my own opinions. I am not receiving compensation for it (other than from Seeking Alpha). I have no business relationship with any company whose stock is mentioned in this article.

What is a Hedge Fund?
Letter To Partners: A Choppy Second Quarter In Review
Halma: Don't Overpay For Its Strong Dividend Record (OTCMKTS:HLMAF)
Air Products: A Durable Business Creating Shareholder Value (NYSE:APD)
Will Rising Coronavirus Risk Derail The U.S. Economic Recovery?
Cobalt Miners News For The Month Of October 2020
Palantir LEAPS (NYSE:PLTR)
These 9 Silver Miners Are A Basket Of Opportunity