The novel coronavirus continues to spread in several countries around the world. At the time of this writing, there were 10.2 million COVID-19 cases in the world, with over 500,000 deaths. The rapid spread of the pandemic has gravely affected the global GDP growth. The International Monetary Fund now expects the global economy to contract by 4.9% this year. This downturn will undoubtedly hurt business performance in all the major sectors, triggering job losses, hurting demand, and pushing the consumption of goods and services lower.

The tough business environment has already caught up with the oilfield services industry which is seeing a sharp drop in demand for fracking services. The demand shock has been so severe that it has forced the industry titans Halliburton and Schlumberger (SLB) to make tough decisions ranging from eliminating thousands of jobs to slashing dividends to making wholesale cuts to capital expenditures. These drastic actions indicate that the oilfield service providers are not expecting a rejuvenation of demand in the present scenario.

As a reminder, Halliburton posted robust results for Q1-2020, but it was also seeing signs of weakness. The company reported a 35% increase in adjusted profits to $0.31 per share and generated free cash flows of $12 million, up from a cash flow deficit of $481 million in Q1-2019. But it also posted a 25% drop in revenues from the crucial North American market to $2.46 billion. The company typically gets most of its revenues and earnings from North America, where it is the leading provider of fracking services. But it reported a reduction in drilling activity and pricing levels in the North American land market, which pushed its revenues lower. The business environment worsened in the second quarter, setting the stage for a decline in overall revenues and earnings.

The price of the US benchmark WTI crude tumbled to historical lows in the second quarter. The spot price of WTI averaged around $27 per barrel in Q2-2020, significantly below the Q1-2020 average of $46 per barrel. The tough business environment forced shale oil and gas producers to significantly cut capital expenditure to align their cash flows with the prevailing market conditions. The US oil producers have announced budget cuts of more than $42 billion, with each company reducing its capital program by an average of 37%. 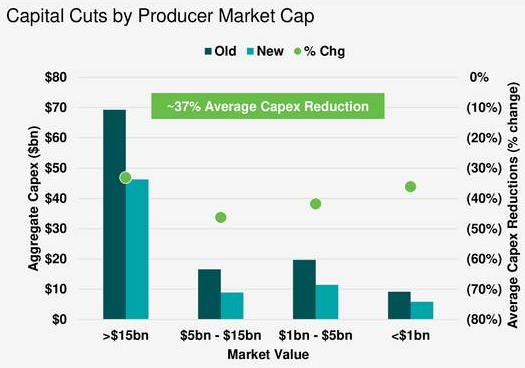 The capital cuts have been accompanied by an unprecedented decline in drilling activity. The US land rig count tumbled to 254 in the week to June 26 from this year’s peak of 771 rigs in early-March, according to data from Baker Hughes (BKR). The total oil and gas rig count has fallen to an all-time low of 265 rigs. Virtually all oil producers have removed rigs, while some companies like Occidental Petroleum (OXY), Apache Corp. (APA) and Marathon Oil (MRO) have cut their US onshore rig count to zero units. Some of the biggest players of the industry, including Exxon Mobil (XOM), Chevron (CVX), EOG Resources (EOG), Continental Resources (CLR), and Pioneer Natural Resources (PXD), have removed dozens of rigs from all major US shale oil plays, particularly the Permian Basin, Eagle Ford, and Bakken regions which together accounted for a majority of US oil production.

The cut in capital expenditure and the subsequent decline in drilling activity will push Halliburton’s revenues and earnings lower in Q2-2020 from Q1-2020. The company might also burn cash flows. But in my view, Halliburton can stand firm in this challenging period. The company doesn’t have the strongest balance sheet, with a total debt of $9.83 billion which translates into a lofty debt-to-equity ratio of 144% – the highest among its peers Schlumberger, Baker Hughes, National Oilwell Varco (NOV), and TechnipFMC (FTI). But an above-average debt load isn’t a major red flag since the company has a manageable debt maturity profile, with just around $1.3 billion of debt coming due through 2024. Besides, Halliburton also has robust liquidity of $5 billion, which includes $1.4 billion of cash reserves and funds available under the revolving credit facility. That should help meet any short-term funding needs.

Furthermore, Halliburton has taken several steps which should help the company greatly in conserving cash flows. It slashed this year’s capital budget by 48% to $800 million from $1.53 billion in 2019. It reduced dividends by 75% which can result in cash savings of $474 million on an annualized basis, as per my estimate. It is targeting $1 billion in cost savings by clamping down on overheads, payroll, operational, and other costs. Although Halliburton might face a cash flow deficit this year (ahead of the working cap. changes), due to the cost-cutting measures, it might not face a large deficit. I also expect Halliburton to realize a large working capital benefit in 2020, given this is currently one of management’s top priorities, which might help plug a cash-flow deficit.

The great thing, however, is that now we are beginning to see light at the end of this tunnel. The US oil price has climbed from around $20 a barrel in early-May to $40 at the time of this writing. The gains appear to be on solid footing since they’ve come on the back of the improvement in the market’s supply and demand situation. The commodity has received support from a decrease in supplies from OPEC, its allies including Russia, and other non-OPEC oil-producing countries such as the US and Canada. The US oil production has fallen from 13 million bpd in early-2020 to 11 million bpd by mid-June, as per the US Energy Information Administration’s estimates. The global oil demand, on the other hand, has started to recover as major economies, including China and India, lift lockdowns and ease travel restrictions. In the US, gasoline demand has been steadily rising after touching April lows, albeit at a slower-than-expected pace. The markets remain jittery and the refiners are exercising caution as the coronavirus ravages on but oil demand is still heading in the right direction.

This improvement in oil prices has given confidence to some of the low-cost oil producers who had curtailed output and removed rigs in April and May, and have started resuming drilling activity and putting some of those rigs back to work. EOG Resources and Parsley Energy (PE), for instance, who substantially cut production in Q2-2020 intend to ramp up output from the second half of the year. Continental Resources, which reduced output by 70% in May, is also easing the rate of curtailment and restoring production.

I think these are all early signs of a turnaround and only the lowest cost producers whose wells can generate decent returns and free cash flows at $40 oil have started resuming production. We may not witness a major industry-wide revival in the short term. But in the upcoming quarters, as global oil prices climb, supply remains low, and demand continues to rise, more oil and gas producers will be inclined to increase drilling activity. At some point, perhaps in 2021-22, the E&P companies will start increasing capital expenditures and we’ll start seeing a new reinvestment cycle. That’s going to drive Halliburton’s turnaround.

Halliburton stock has surged by more than 90% in the last three months, largely due to the improvement in commodity prices, easily outperforming its peers (OIH) whose shares rose by 45% in the same period. The stock is now looking expensive, currently trading 11.04x on an EV/EBITDA (forward) basis, above sector median of 7.8x, as per data from Seeking Alpha Essential. Its peer Schlumberger is cheaper, currently trading 10.5x EV/EBITDA (forward) multiple. At this price, I’d rate Halliburton as a hold.

In the Money vs. Out of the Money Options
Square: The Gift That Keeps On Giving (NYSE:SQ)
Glencore: Caution Warranted Despite The 11% FCF Yield (OTCMKTS:GLCNF)
Weekly High Frequency Indicators: Calm Before The Category 5 Constitutional Hurricane?
Saudis are exporting less crude to the world market, shipping data shows
Ligand Plans Pfenex Acquisition, And Other News: The Good, Bad And Ugly Of Biopharma (NYSEMKT:PFNX)
Humana: High Multiple Might Not Be Sustainable (NYSE:HUM)
Dyne Therapeutics Commences $100 Million IPO Plan (Pending:DYN)