Investors are understandably nervous as we head further into a contentious U.S. election season, especially with virus-related economic concerns weighing heavily on everyone’s mind. Each time the major stock averages show even a hint of weakness, it seems, market pundits go into frenzy mode and stumble over each other in a mad dash to predict the next “big crash” ahead for stocks.

There’s plenty of evidence, however, to suggest that the latest bout of broad market weakness is a case of a decline in demand and not an increase in supply (which normally manifests as widespread dumping of equities). As I’ll argue here, the stock market’s supply factor is well contained as shown by the limited number of stocks making fresh new lows. And while the number of stocks making new highs has shrunk, the overall new high-low trend is still healthy enough to keep the stock market’s intermediate-term (3-6 month) upward trend intact.

It’s clear that volatility is making a return in September, a month that carries a stigma for being the start of market declines in years past. The Nasdaq Composite Index has already dropped 10% from its all-time high this month, which technically qualifies as a “correction” in the parlance of Wall Street.

Given the tech sectors’ recent weakness, it’s not surprising that the bears have started growling again after a period of dormancy this summer. Indeed, if you’re paying attention right now, you’ve probably noticed that one those days when the S&P 500 Index (SPX) has dropped, there has been a plethora of market commentators coming out of the woodwork and predicting that a huge market sell-off lies just ahead. So loud have their bearish clamoring become, in fact, that it’s virtually impossible to ignore.

A manifest token of this pessimistic spirit can be seen in the trend bearish investor sentiment in the last several months. As can be seen in the following graph, the weekly survey conducted by the American Association of Individual Investors (AAII) shows a conspicuous trend toward persistent bearishness among AAII members. 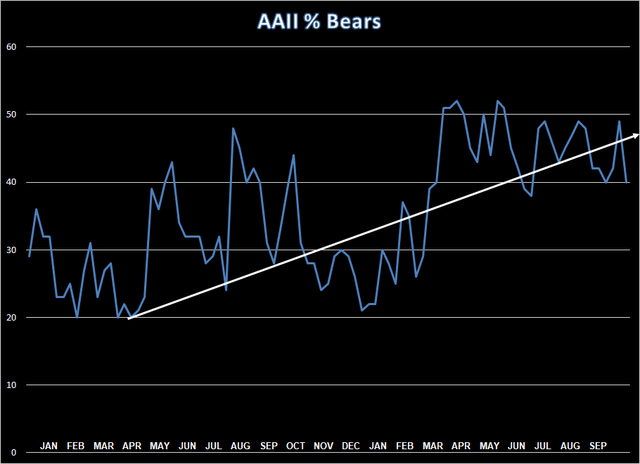 From a contrarian’s perspective, this tendency for participants to rapidly switch to a defensive position at the first hint of trouble is good news for the stock market. Investors’ heightened sensitivity to negative news headlines helps keep short interest levels high, which in turn makes it easier for the bulls to ignite short-covering rallies when the predicted troubles (whatever they may be) fail to materialize.

While there is a built-in support for stocks in the form of elevated fear (which should keep the major indices from collapsing outright), there’s no denying that a current of weakness exists below the market’s surface. My favorite way of measuring the market’s internal strength or weakness is to look at the trend in the 52-week highs and lows on both major exchanges. In my opinion, the new highs-lows are the single best measure of the incremental demand for equities. When, for instance, the new 52-week highs are at least 3:1 or greater than the new lows for several consecutive days, it means buyers are in charge. But when new 52-week lows number more than 40 for several days, it suggests that there’s an above-normal amount of selling pressure somewhere in the market.

The current Nasdaq weakness I referred to earlier can be seen in the 4-week rate of change (momentum) of the new 52-week highs and lows. As you can see, it’s still in decline, which means the near-term path of least resistance for the tech stocks is down. A falling 4-week momentum indicator doesn’t necessarily guarantee the bears will have their way with the tech sector, but it does mean that sellers will have an easier time pushing stocks lower on bad news (as recent trading sessions have illustrated). 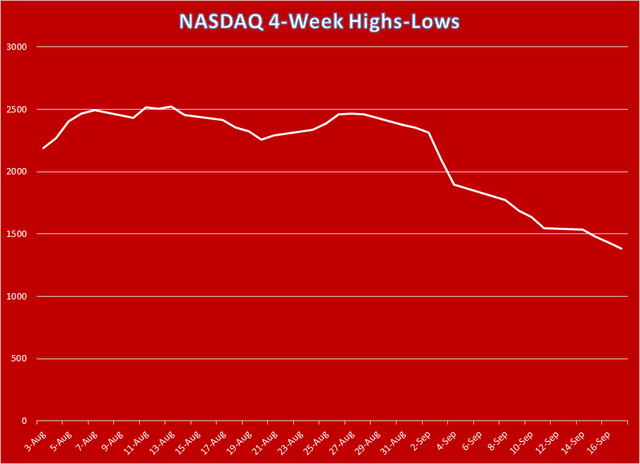 But while the short-term momentum of the Nasdaq highs-lows is falling, it’s important to remember that the daily total number of new 52-week lows remains well under 40 on both the NYSE and the Nasdaq exchanges. This tells me that there isn’t an abnormal degree of supply of shares being dumped onto the market. Instead, the recent weakness is more likely the result of a temporary demand decrease.

More specifically, the number of stocks making new 52-week highs is how I determine the level of demand for equities. And in recent weeks, new highs on both exchanges (particularly the Nasdaq) have shrunk. The following graph illustrates this phenomenon.

On an intermediate-term basis, however, the momentum of the highs and lows is still favorable for a bullish posture. Consider the next chart exhibit which shows the 120-day rate of change in the NYSE new highs-lows. It’s still clearly in a rising trend, which is one reason why the bears likely won’t be able to collapse the market like they did last winter. 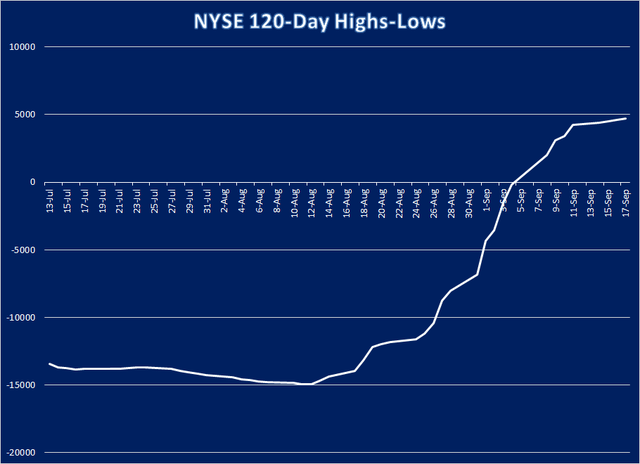 In view of the evidence presented here, until there is sufficient evidence of an increase in stocks making new 52-week highs (preferably more than 100 per day on the Nasdaq), investors should walk slowly and should probably refrain from initiating new long positions among individual tech sector stocks (while keeping a close watch on existing longs). For as long as the Nasdaq 4-week high-low indicator is declining, there’s still a chance that the bears can push tech stocks lower in the immediate term.

By the same token, however, there’s no cause for undue alarm since the latest pullback in the Nasdaq Composite appears to be due mainly to a decline in demand (likely until election fears dissipate), rather than a more troublesome supply-related issue. All told, investors are justified in maintaining an intermediate-term bullish stance toward equities, while staying cautious in the near term until the new 52-week highs start expanding again.