Endeavour Silver (EXK) finally released the results of the updated PFS for its Terronera project. Terronera is highly important for the future of the company, as it should become its new flagship asset, with robust production volumes and low production costs. This is why the markets were disappointed by the Q1 earnings release, that included the following statement:

The Company also announces that it has received an economic summary of the updated pre-feasibility study (“PFS”) for the Terronera silver-gold mine project in Jalisco, Mexico. Significant changes were made to the operations plan, capital and operating costs compared to the previous PFS and as a result, although still positive, the new PFS returned less robust economics compared to the prior PFS.

Endeavour’s new Director of Project Development is conducting a complete review of both studies in order to assess all assumptions and optimize the project design and economics for an internal updated pre-feasibility study prior to proceeding to a full independent feasibility study. Endeavour plans to provide a further update of the Terronera Project within the next three months.

However, after the results of the updated PFS were finally released, it turned out that the new numbers are better compared to the old PFS:

Endeavour management worked with Ausenco Engineering Canada Inc. (Ausenco) on the re-conceptualization and re-engineering of the project to generate the significantly improved 2020 PFS economics presented herein.

The new numbers look good (table below). The average annual production increased from 2.9 million toz silver and 28,000 toz gold to 3 million toz silver and 33,000 toz gold. The increased production volumes are attributable to a higher throughput rate, which increased from 1,500 tpd to 1,600 tpd, and slightly higher recoveries. These two factors resulted in slightly higher projected production volumes, despite a notable decline in expected silver grades. The initial CAPEX declined from $115 million to $99.1 million. It is a very low number and Endeavour should be able to obtain the financing without any major issues. However, the price paid for lower initial CAPEX has the form of higher sustaining CAPEX. It increased from $25.8 million to $62.4 million. Therefore, the AISC increased from $1.36/toz silver to $2.1/toz silver, despite the fact that the cash costs declined from $0.15/toz silver to approximately $0/toz silver.

The problem is that Endeavour’s behavior looks strange and it is not sure which parameters had to be modified in order to record an improvement in comparison to the old PFS. Moreover, the original plan was to complete the PFS and skip directly to financing and mine construction. But after the PFS was completed, Endeavour announced that a feasibility study will be prepared. Although it is already underway, it will take another 9-12 months to complete. The construction and mine ramp-up should take another 18 months. It means that commercial production shouldn’t be expected before 2023. 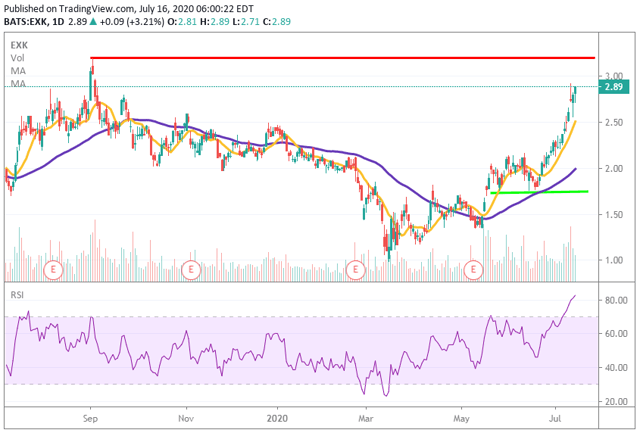 The recently released results of the updated PFS did not halt Endeavour’s steep share price growth that started in the middle of June, near the $1.8 level. As a result, although Endeavour has still a lot of space to grow before it reaches the nearest resistance level at $3.2, the RSI is heavily overbought. Its value is over 80. Moreover, no miracles should be expected from the Q2 financial results, which means that the probability of a correction is very high.

The published results of the updated PFS are good. Some improvements were reached and the mine should be highly profitable at the current metals prices. The question is, what optimizations did the management perform, to turn the “less robust economics” to “more robust economics”? And can the “more robust economics” be confirmed also by the feasibility study that is currently underway and that should be completed probably in Q2 2021? We will see next year. Meanwhile, Endeavour’s share price seems to be primed for a correction.