I updated my economic composite to reflect the release of the U.S. Labor Department’s employment report on July 2. The report showed an increase in nonfarm employment of 4.8 million in April. The number far outpaced the consensus estimate of 2.9 million and the gain of 2.7 million in May, which was revised upward by 190,000.

Temp employment in June climbed 149,000 from the previous month, rising 7% sequentially. The June figure was well ahead of the 47,000 increase in May. On a year-over-year basis, temps were down 26%. Still, it was encouraging to see the rate of decline slow from 33% in April and 31% in May.

What’s more, in mid-June, the American Staffing Association (ASA) released its staffing employment and sales report for the first quarter. The report showed that U.S. staffing companies employed an average of 2.79 million temporary and contract workers per week in Q1. The figure was off 382,000 from Q4 and down 8.9% year over year. However, the decline was slightly better than the 400,000 loss I was estimating. ASA also noted that its surveys indicate that staffing companies expect their Q2 revenue to fall about 20% year over year. I’ve factored the outlook into my near-term forecasts for this data series.

In all, I’ve raised my estimates for both the BLS and ASA data series for the months ahead. In the near term, I’m estimating monthly increases in temp employment that are fairly robust but in line with historical gains coming out of a recession. The effect is negative economic composite scores through the rest of the year, ranging from -15 to -20.

The bottom in temps appears to have occurred in April, at 2.05 million. This lines up with the observation I made in my May article analyzing the April BLS data. I noted that temps declined 34% from peak to trough during the last recession and that the April figure represented a 33% drop from the peak for temps at 3.05 million in November 2018. As I said, “If the previous pattern holds, this would suggest most of the damage has already been done.” It’s looking as though the 1/3 decline may hold for both recessions.

The economic composite score is on track to swing positive in April 2021. It typically takes three consecutive months of a change in sign (from negative to positive and vice versa) to confirm a change in outlook. That would put confirmation for an expansionary outlook at sometime in mid-2021.

Given the way the market has been discounting a recovery, some investors may find that uncomfortably long to remain underweight equities. And a glance at Figure 3 (below) would suggest the model is better at timing the start of recessions versus the ends, missing the early stage of recovery, as in 2009 and 1991. More-aggressive, long-term investors may instead choose to build positions ahead of the model’s confirmation, when valuations are more attractive.

The next Employment Situation report is scheduled to be released on Friday, August 7. I expect to provide an update to the economic composite shortly after the report comes out.

Figure 1 below shows the actual monthly values of the economic composite from 1991 through the present and the estimated values through the middle of 2020. In general, the composite remains positive during periods of economic expansion and turns negative during periods of recession. The vertical dashed lines mark the inflection points when the economy is poised to enter recession or has safely exited recession. It typically takes three consecutive months of a change in sign (from positive to negative and vice versa) to confirm a change in outlook.

My composite of publicly available forward P/E estimates puts the current forward P/E on the S&P of 3,180 (July 6 end of day) at 21.4. With the economic outlook uncertain, I think this is richly valued.

This is well above the levels of January and February, before the pandemic hit, when the P/E ranged from 17 to 19. I think there are too many uncertainties to justify the current valuation, including the risks of COVID-19 and the upcoming November elections. The market seems to be pricing in a robust recovery without any missteps. So far, there have been only two months of gains in temp employment. Cautious investors ought to wait for a more sustained pick-up in temps, which would indicate that business fundamentals are improving, before making commitments.

On the other hand, with temp employment starting to improve month to month and projected to continue to rise, this period seems similar to the second half of 2009. At that time, temps were recovering from the financial crisis on a month-to-month basis. While year-over-year comparisons were still negative, the rate of decrease was easing. The numbers were suggesting the path to recovery was growing clearer. The S&P had bottomed in March 2009 and climbed 50% off its low that summer. Likewise, we are now seeing month-to-month improvement in temps and a rising market.

A five-year chart of the valuation composite and the S&P 500 is below. The market has rallied more than 40% from its March low. 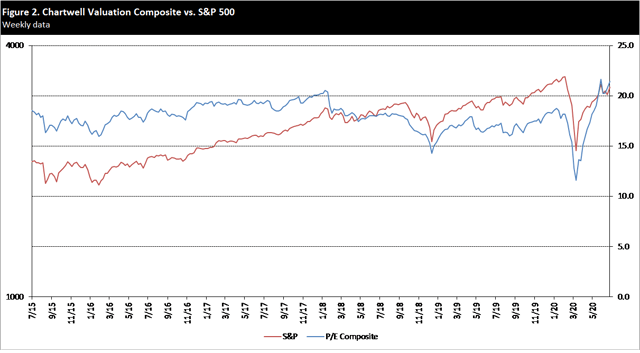 The model’s historical record is depicted in the chart below. The economic composite predicted the beginning and end of the 2000 recession and the 2008 recession. It also predicted the end of the early 1990s recession. Some of the data series used in the composite did not exist before 1990 – hence the start of the track record at that time.

In my March 7 report, I closed out the most recent Overweight period, which ran from the end of March 2010 through the end of October 2019. In that time, the S&P returned nearly 11% annually. 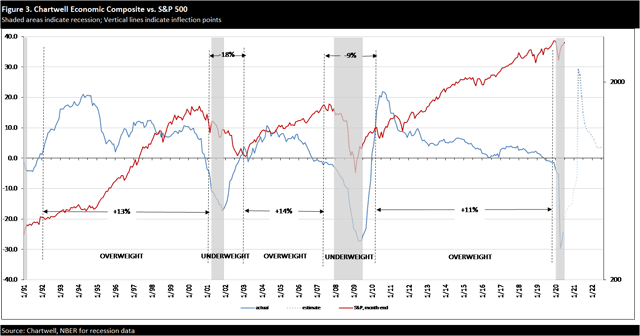 For a full discussion of the Chartwell method, I refer readers to a description of the process in my April 2017, employment update, under the heading “Methodology.”

Inflation Is A Proxy For GDP: Harrison
CSX: Things Are Definitely Getting Better (NASDAQ:CSX)
There's A Lot Of Money To Be Made After This
An Asset Rich Strategic Builder: Galliford Try (OTCMKTS:GLLRY)
America's Scariest Charts: Duration Of Unemployment And Employment Index
Cobalt Miners News For The Month Of October 2020
easyJet: The Sky Is Not Clear Yet (OTCMKTS:EJTTF)
The Bottom Fishing Club: Archer-Daniels Midland