DMC Global (BOOM) serves the energy, industrial, and infrastructure markets. Its products are used in perforating oil and gas wells, petrochemical processing, oil refining, and aluminum smelting facilities, and maintenance and retrofit projects at chemical processing. The company’s growth rate has slowed down in Q3 and can decelerate further in Q4. So, I do not think the stock will yield positive returns in the short term. However, I think it will continue to gain market share based on robust product offerings, which makes the stock an excellent medium-to-long-run investment.

The completion activity slowdown has adversely affected the company in Q3. But the company has continued to strengthen its competitive advantage in the perforating gun systems market. With a slew of new shaped charges products, it may gain market share in the coming quarters, which will keep the margin steady in 2020. The management has recently increased quarterly dividend six-fold, which expresses its confidence in the company’s balance sheet strength.

What Are The Industry Indicators Suggesting? 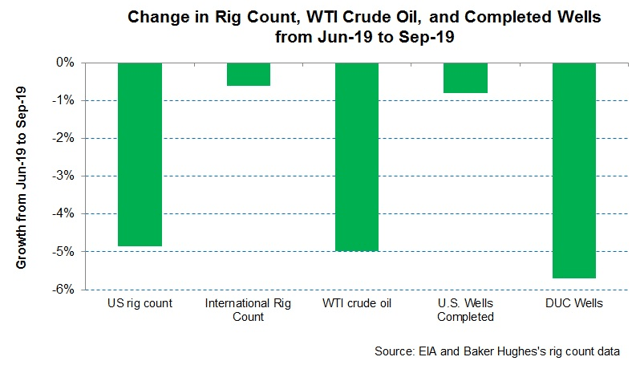 From June until September-end of 2019, the average West Texas Intermediate (or WTI) crude oil price was down by 5%. The drilled but uncompleted wells (or DUC) in the EIA-designated key shales weakened (down by 5.7%), while the completed wells decreased marginally. The lower rig completions and falling inventory of DUC (drilled but uncompleted) wells suggest that E&P activities will likely remain depressed for a few more quarters. Lower demand and the excess capacity of the OFS equipment is likely to keep pricing for pressure pumping services low or competitive at best.

As drilling activity in the unconventional shales consolidates, the demand for safe initiating systems and ready-to-use and reliable perforating systems increased. Since Q2, there has been a steady demand for the company’s intrinsically safe initiating systems called the IS2 product family. The company added two models to its DynaStage product family, DS Trinity 3.5, and DS Trinity 4.0. Trinity 3.5 is a smaller diameter version of the Trinity 4.0. These compact systems are easy to assemble and have higher perforating intensity than conventional guns that competitors offer.

Also, compared to peers, the company’s perforating guns are less susceptible to electromagnetic interference. According to the company’s estimates, the DS Trinity 3.5 perforating system and the DS NLine shaped charges can improve frac performance and reduce breakdown pressure by up to 25%. Lower pressure can lead to a reduction in horsepower requirements for hydraulic fracturing and also reduce maintenance costs for the pressure pumping equipment.

The major competitors in the perforating gun systems market for the company are Core Laboratories (CLB), Hunting Titan (OTCPK:HNTIF), and Oil States International (OIS). Traditionally, many of the companies have been perforating gun component providers. However, DMC Global’s management has been persisting with the competitive advantages of integrated or pre-assembled guns. BOOM’s initiating system has a detonator, and it also has a solid-state circuit board, which means it has a pre-wired system. In contrast, the competing systems in the market have wired systems, while the detonator uses straight current, straight voltage radiofrequency. The switch market itself is expected to grow substantially. From 2017, when the addressable switch market was estimated to be about 48% of the perforating market is expected to grow to 72% of the market in 2020.

Apart from the differences in the switch, competitive products use resistorized detonators. These factors give BOOM’s system a competitive advantage in terms of reliability and safety. It seems the management has had a head start in the business because many of its peers are moving to integrated gun manufacturing. The company’s management believes that the integrated gun system will capture 75% to 80% of the market. 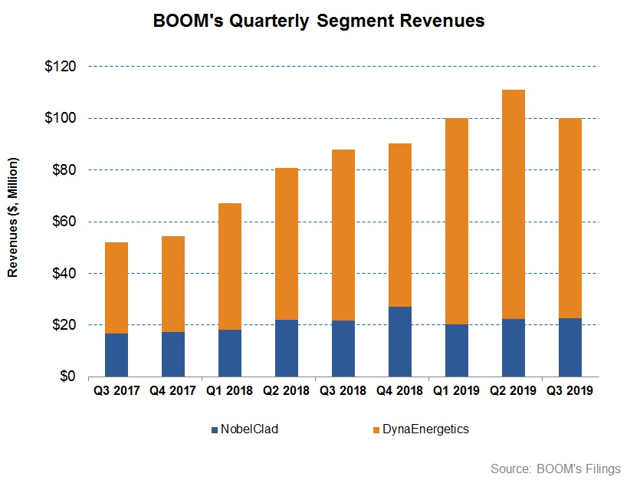 The slowdown in well completion activity in North America’s unconventional shales affected the DynaEnergetics segment results adversely. As a result, the segment revenues decreased by 12.7% in Q3 2019 compared to Q2 2019. Quarter-over-quarter, the segment adjusted EBITDA decreased by 18.5% in Q3 2019. Revenues from the NobelClad segment increased by ~2% in Q3 2019 compared to a quarter ago, while the segment adjusted EBITDA remained unchanged during the same period. In Q3, the company recorded a $5.9 million impairment charge related to a planned closure of a DanaEnergetics manufacturing facility in Siberia. 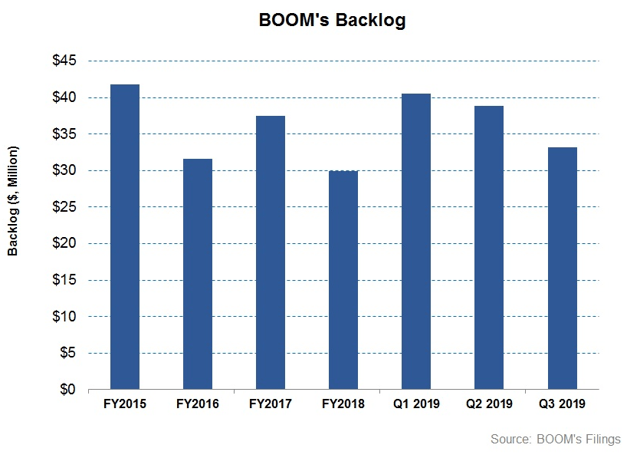 If we look at NobelClad’s backlog, it appears some softness has crept back into the system as a result of which backlog decreased sequentially over the past couple of quarters. At the end of Q3 2019, the backlog decreased by 15%, following a 4% decline in the previous quarter. Backlog, which represents unfulfilled purchase orders and commitments, is expected to be filled within a year. A lower backlog decreases future revenue visibility.

In Q4 2019, BOOM’s management expects revenues to decrease (5.6% down) compared to Q3 2019. The DynaEnergetics segment is expected to see a 17% revenue fall, while the NobelClad segment revenue can decrease by 6% in Q4 2019 versus Q3 2019. Along with the decrease in revenues, gross margin can decline by 1.7% in Q4 due to the pricing pressure at DynaEnergetics in North America and less favorable project mix in the NobelClad segment.

BOOM’s management has revised up the full-year guidance from the previous forecast. At the guidance mid-point, the management expects the FY2019 adjusted to increase to a range of $3.65 to $3.80 versus the $2.07 reported in FY2018.

In September, BOOM increased the quarterly cash dividend to $0.125 per share, or $0.50 per share annualized, which translates into a forward annual dividend yield of 1.1%. This was a six-fold increase in the quarterly dividend. In comparison, Halliburton’s (OIS) forward dividend yield is higher (3.4%). BOOM’s current dividend is the highest since Q2 2009.

In 9M 2019, BOOM’s cash flow from operations (or CFO) was $35 million, which was a significant increase compared to a year ago. The growth was led primarily by higher revenues.

In 9M 2019, the company spent $22 million in capex, which is marginally lower than a year ago. Much of the year-to-date capex was spent on DynaEnergetics’ shaped charge lines at the Texas facility. In FY20202, capex is expected to decline to a range of ~$15 million to $20 million.

BOOM’s debt-to-equity ratio (0.17x) is lower than its peers’ average of 0.35x. Halliburton (HAL) has much higher leverage ratios (1.1x). With the available liquidity (cash balance and revolving credit facility) of ~$52 million, and at the current free cash flow generation run rate, the company does not have any near-term financial risks. The company reduced net debt by 43% on September 30, compared to the start of the year, which allowed the company to increase the quarterly dividend manifold.

What Does The Relative Valuation Imply?

The sell-side analysts expect BOOM’s EBITDA to increase less sharply than peers in the next four quarters, which typically results in lower EV/EBITDA multiple compared to the peers. The company’s EV/EBITDA multiple is lower than the peers’ (GRC, HAL, and OIS) average of 12.2x. I have used estimates provided by Seeking Alpha in this analysis.

According to Seeking Alpha’s quant rating, the stock receives a “Neutral” rating. Although its ratings are high on growth, profitability, and EPS revision, it scores poorly on momentum and value grade. BOOM’s revenue and profit growth rates have been higher than peers, but due to the fall in revenues in Q3, the growth rate has not been consistent. So, I would rate the growth rate lower than Seeing Alpha. I believe Seeking Alpha’s moderate rating on profitability can be conservative. I also think the meager rating on EPS revision may be too conservative, given that its earnings beat analysts’ estimates in all the past four quarters.

What’s The Take On BOOM?

Despite the completion activity slowdown, DMC Global continued to make inroads in Q2 due to its competitive advantage in the perforating gun systems market. It has added to its automated shaped charge manufacturing line while consolidating its operations in Europe and Russia. The growth rate slowed down in Q3, and I think it can decelerate further in Q4. However, the introduction of a variety of shaped-charges products may gain market share in the coming quarters, which will keep the margin steady in 2020. The perforating sun system market is favoring the integrated guns, and BOOM is a market leader. On top of that, the company has participated in several biddings, and some of these contracts push the NobleClad segment sales higher in 2020.

BOOM’s balance sheet is stable and has low leverage. The current weakness in the energy market can put pressure on short-term growth. However, the recent sixfold increase of the quarterly dividend reflects the management’s confidence in the balance sheet and the long-term growth opportunities. I think it will continue to gain market share, which makes the stock a solid medium-to-long-run investment.