Disney (DIS) is a magical company whose business has been heavily disrupted by the coronavirus pandemic. As a result, the market is undervaluing the entertainment giant. However, the pessimism surrounding the stock has created an excellent opportunity for long-term investors to buy a fantastic business with a wide moat at a reasonable price.

My team and I have been bullish on Disney since March and were buying in the $90s and early $100s. However, the ship has not sailed yet, and there’s much more room for Disney to rally. My investment thesis is summarized below:

So we finally have visibility as to when the magic returns, at least in Florida: Disney has proposed to reopen its iconic theme parks in July next month. The Animal Kingdom and the Magic Kingdom will reopen on July 11, with Hollywood Studios and Epcot, following suit on July 15. According to Disney, the reopening will be phased, and capacity will be regulated according to six-feet social distancing guidelines. 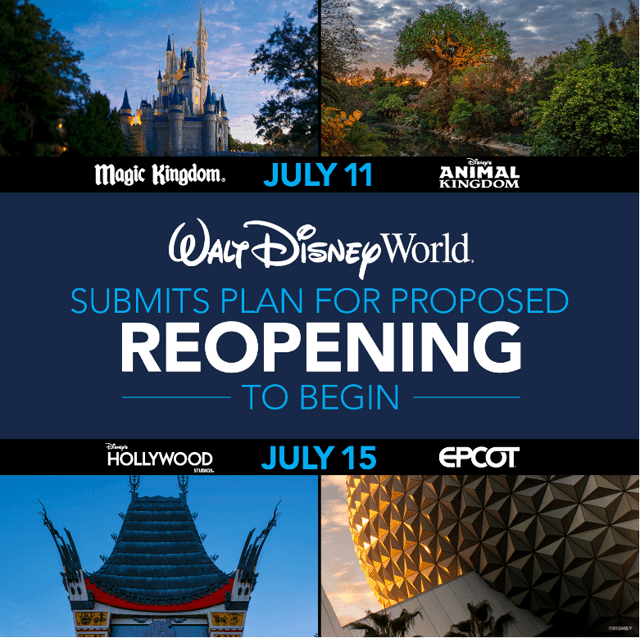 Although there has been intense skepticism about the reopening, the proof is in the pudding as to how people will take returning to Disney theme parks. That is, the Shanghai Disneyland resumed operations at 30% capacity (tickets sold within minutes of going on sale, indicating pent-up demand) on May 11, 2020, and the new normal looks something like this:

However, the reopening trends in Shanghai Disneyland may not represent what transpires in Orlando or Tokyo or any other location. So, let’s hear directly from Disney’s CEO Bob Chapek on the company’s reopening plans for its Orlando theme parks, get a status update on Shanghai Disneyland attendance rates, and simultaneously learn about the early trends seen at Disney Springs, Florida, which reopened on May 20.

In the above video, CEO Bob Chapek highlighted the fact that even at 50% capacity, the company will cover its variable costs and a portion of its fixed costs, which is extremely heartening for investors (hence, the recent rally in the stock).

The NBA Joins Mickey At Disney World This Summer

To further highlight the momentum building within Disney, take a look at the NBA’s proposed season restart, which is to be played at the ESPN (owned by Disney) sports complex.

According to ESPN’s Adrian Wojnarowski, the NBA’s Board of Governors has approved a 22-team format to restart the league season (to be played like summer league) at the end of July at the ESPN Wide World of Sports Complex located within the Disney campus near Orlando, Florida.

NBA fans are sure to be excited about watching basketball again after a long hiatus, and Disney will benefit from the surge in ESPN+ viewership with new subscriptions and return of ad revenues. Thus, NBA joining Mickey at Disney World is a big win for the company.

In terms of parks, resorts, and cruises, Disney investors will need to be patient for a full recovery to pre-COVID-19 revenue levels. However, a partial reopening will help offset some of the cash burn of ~$800 million per month for the segment.

Someday, Disney+ Could Be Bigger Than Netflix

Disney+ launched in the United States, Canada, and the Netherlands on November 12, 2019, and ended its first day of operation with 10 million subscribers. Since then, the streaming service has been rolled out in Australia, Puerto Rico, Latin America, India, and some European countries as and when Disney’s content deals with some rival streaming services came to an end.

After Disney+ was launched, the company said that it expected Disney+ to reach 60-90 million subscribers by 2024. Fast forward six months, on May 4, 2020, Disney reported that Disney+ had 54.5 million subscribers. To put it succinctly, Disney+ has proven itself to be an utterly resounding success – a knight in shining armor during the COVID-19 disruption. 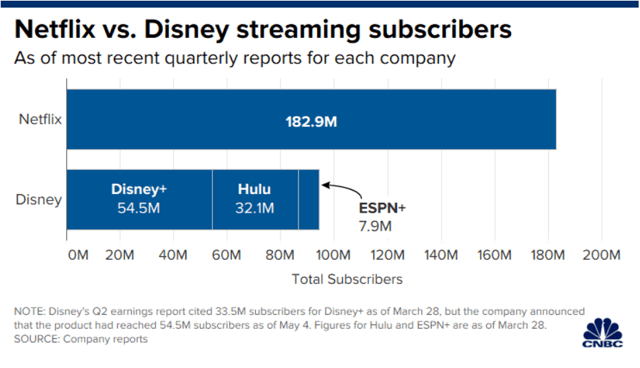 Well, right now, in terms of subscribers: Netflix > Disney plus + Hulu + ESPN+. However, the streaming wars are heating up, and Disney+ has outpaced Netflix in growth since its debut. The growth trends show that Disney+ could potentially have more subscribers than Netflix in the future. We will analyze and value Disney+ separately in a follow-up research note in this series, as such a valuation would make this article unbearably long. For now, let’s focus on evaluating Disney as a whole.

Determining A Fair Value For Disney

In the current environment, with little to no certainty about Disney’s business, the determination of fair value is complicated. Today, we will share our fair value estimate for the company. We will leverage the L.A. Stevens Valuation Model, which entails these three steps:

So, according to LASV Model, we estimated Disney’s fair value to be $162.91, which indicates that it is still undervalued by about 23.27%.

Some of you might say that the above valuation would have been correct before the coronavirus pandemic, and it is utterly absurd in the current environment.

But one must consider that the market and asset values are forward-looking.

I firmly believe that Disney remains grossly undervalued, based on the cash flows the asset (i.e., the stock) is capable of generating over its lifetime. And as we all know, the value of any asset, whether it be a bond, stock, or rental property, is simply the present value of the lifetime of cash flows it produces.

Now, we know that discounted cash flow models indicate whether the company is overvalued or undervalued, but they tell us nothing regarding future projected returns.

So with this in mind, let’s move on to the third step of the LASV Model. The third step simply entails growing free cash flow per share at the above-assumed growth rate, then assigning a conservative price to free cash flow multiple to the stock in year 10. This provides to us a target share price by which we can create a CAGR.

If the CAGR is higher than our hurdle rate of 9.8% annualized, then we purchase the stock. If not, we do not purchase and await a better entry point.

As mentioned above, to determine future projected returns, we must estimate future intrinsic value, i.e., the growth of free cash flow per share with a conservative price to free cash flow multiple assigned. By doing this, we arrive at the following result:

Hence, if an investor were to buy Disney at $125 for ten years, he/she could expect a total price return of 13.69% CAGR.

Last month, Disney cut its first-half dividend to zero, citing uncertainty in business operations due to COVID-19. However, the company had a rich history of growing dividends over the past decade, and I expect the company to resume its dividend as the economy picks up, its cash flows stabilize, and life returns to normal.

Thus, accounting for dividends is necessary to forecast the total expected return on our investment. Here’s the result (assuming zero dividends for 2020-21):

We see the following factors as the most significant risks to Disney:

In today’s chapter, we discussed the reopening of Disney’s theme parks in Orlando, the news about the NBA completing its season at Disney World, and the impressive performance of Disney+. These events have served to propel the stock ~25% from where I originally purchased it (along with my subscribers). From my perspective, the stock has not finished its run upward, and at a share price of $125, provides a compelling opportunity to generate alpha.

Next, we determined an intrinsic value for Disney (~$163), which translated to an expected total return of ~14.64% on a ten-year investment made at the current price of $125. Lastly, we rounded the article by laying out some of the potential risks that could haunt Disney in the future.

In the near future, I will be writing four follow-up research notes on Disney, which shall entail: long-term financial trend analysis; a study on the short-term impact of COVID-19 on Disney’s business and scenario analysis to determine if a change in the intrinsic value is inevitable; DuPont Analysis to observe the short-term trends in profitability; and the last research note will be based solely on Disney+. That is, I will value Disney+ as a stand-alone business.

Note: “Disney Part I: The Magical Company” is a five-chapter research series created by L.A. Stevens Investments, LLC. Today’s article was the first chapter of the series. So, stay tuned and click the “Follow” button to get an email notification when the next chapter is released.

As always, thanks for reading; remember to follow for more, and happy investing!

Did you find our analysis compelling? Would you like more in-depth, institutional quality analysis, alongside many more incredible, potentially market-beating opportunities? 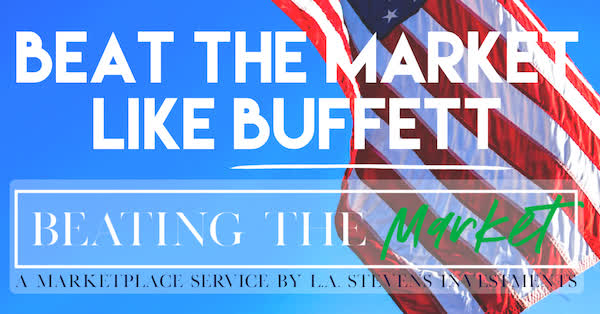 At Beating the Market (my Marketplace Service), we find dividend payers, high-growth stocks, and a mixture of the two. My stock picks will not only help you achieve your financial goals, but also, they often beat the market.

So start your free two-week trial today to begin beating the market and achieving your financial goals!

Disclosure: I am/we are long DIS. I wrote this article myself, and it expresses my own opinions. I am not receiving compensation for it (other than from Seeking Alpha). I have no business relationship with any company whose stock is mentioned in this article.

Gold falls below $1,500 as it is dragged into the global market rout
Royal Bank Of Canada: Get That Yield While You Can (NYSE:RY)
WELL Health Technologies Corp.'s (WLYYF) CEO Hamed Shahbazi on Q3 2020 Results - Earnings Call Trans...
6 Stocks I Just Bought For My Retirement Portfolio - Hong Kong Edition
Do Economic Moats Still Matter?
Exxon Mobil: Will Oil Be The Next Tobacco Or Coal Matters More Than The Dividend (NYSE:XOM)
How to be Financially Smart with Your Income
AbbVie: Now It's Time To Dollar-Cost-Average On This 5.6% Yield (NYSE:ABBV)