In this article I would like to discuss the current situation of what I consider an undiscovered gem in Despegar.com, Corp. (DESP).

Despegar is a leader in the Latin American online travel industry. I am not breaking any news here to tell you that the travel industry right now and for most all of 2020 has been a complete and unmitigated disaster. Despegar has certainly been no exception.

For the first time ever and complete with comedic irony, I was able to witness in Q2 2020 one of my beloved investments actually post negative GAAP revenue (due to cancellations). Once my laughing/crying subsided I decided to get to work to look deeper into the company and specifically the footings that it stands on.

In these types of situations my instincts tell me to do either one of two things, cut bait and sell it all or double down and go in deeper. I have decided the latter here and will expand on this below.

State of the travel market

In short, it sucks! But to expand on that, every region around the globe is facing the same beast, this is not 9/11 and this is not the 2008 financial crisis, it is a weird combination of both with a bonus kicker of travel restrictions around the globe! It is both a physical risk, psychological conundrum and a result of personal and corporate financial pressures added in.

Quick survey, who in 2020 has travelled via plane for business after March? If you have, then I sure as heck do not know you. In fact, scrolling through my Facebook (FB) feed, I can only count a few who have travelled via plane even for personal vacations this year.

Is this the new normal? No, no it is not, and I believe I can say that with near certainty. Humans will always want to travel, it is coded into our DNA as a species. So our minds are telling us no, but our bodies are telling us yes. Basically, it is a matter of when, not if we will return to the skies en masse.

It appears that this shift is already happening with the majority of Americans indicating that they are now ready and willing to travel via air. Now as an avid and devout hypochondriac, I am not part of that group yet; however, I myself am even getting the travel bug and have taken up a new pastime of exploring various trips to take once an approved, effective and safe COVID-19 vaccine has been injected into my willing shoulder.

It is abundantly clear that air travel has been affected across the world but Despegar’s top key markets of Brazil and Mexico were hit disproportionately hard, with Brazil down a whopping 90% in June and Mexico not far behind with a 78% cut.

However, surprisingly, Brazil and Mexico have since rebounded very strongly, even in the midst of a case rate that is accelerating again at a rapid pace. 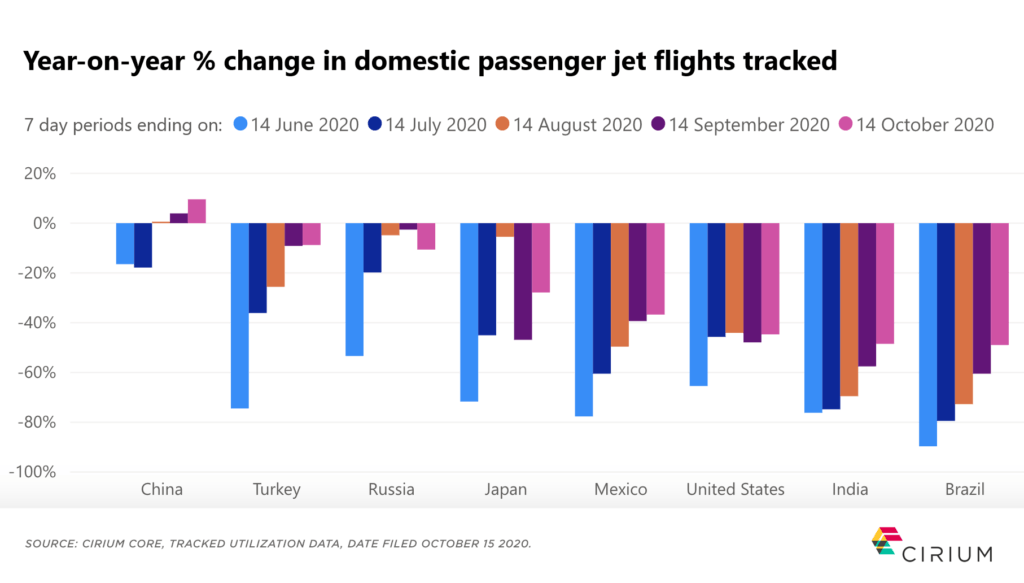 Mexico now looks to be on a better footing than even the USA in regards to the domestic air travel market, showing less than a 40% decline, and Brazil sitting at 45% from numbers gathered on October 14, 2020.

So air traffic numbers are improving even in an environment of increasing case numbers and lack of an effective vaccine. I expect this trend to continue and even accelerate through the winter as governments around the world begin to accept a new normal by relaxing restrictions and people adapt to new attitudes and safety measures.

Once a vaccine is approved and widely distributed, expect further acceleration in the air travel and vacation markets; however, realistically the market will likely not be back to 2019 levels until 2023 at a minimum.

In my opinion, the travel market will eventually return and thrive once again. So the key to investing in the sector seems to be to pick the companies that have the best chance of first, making it to 2023 and second, limiting the amount of damage it takes on during the time it takes to get there.

For me, investing in the actual airlines or cruise ships is totally off the table as the hard assets required to operate the business – such as ships, physical planes and the unions still requiring a salary – are now collecting dust but still costing money, just too much of an albatross to retain much equity value for a common shareholder.

I do think these companies will stay in business; however, the balance sheet damage done already and the likely timetable of a decade or more to deleverage from this crisis is a risk I am not prepared to see through.

I do not think you need to be Warren Buffett to see that the best investing prospects for an eventual travel recovery are in the asset-light online travel companies. In fact, a lot of us have already placed our bets. Both Booking Holdings (BKNG) and Expedia Group (EXPE) have rallied sharply from the lows in March. In Booking’s case it has popped 45% from its March-lows and Expedia has risen a whopping 80%.

Full disclosure, I was fortunate enough to purchase Booking at around $1200 in March and sold in July for $1750 and purchased Expedia for $61 in April, selling in June for $89.

Despegar, however, is bringing up the rear in a big way compared to its peers.

The company has basically received no bounce since the March lows and the company is trading 55% below its February highs of $15. To me this makes no sense whatsoever.

The markets that Booking and Expedia primarily operate in, the USA and Europe, book nearly 90% of travel online already, leaving next to no growth available from taking share via traditional travel agencies, relying on a full travel market recovery to regain its former earnings power. Despegar, however, operates in Latin America, where the online share is still only 40%.

This is not a small part of my thesis, it is actually one of my key points! Not only can Despegar look forward to (hopefully) regaining the 40% of online shoppers in Latin America once travel returns to normal, but it can also enjoy the benefit of the online shift that has taken place across the globe as a result of the pandemic, thus expanding the total market opportunity dramatically for the company as well.

The one area where Despegar shines currently is in market share and brand recognition in Latin America.

This market strength in Latin America is key to the company’s survival and ability to thrive in a post-Covid world. Now I do not question Booking Holdings’ dominance in the USA & Europe; however, Despegar has both a first mover advantage and a home field advantage in regards to Latin America and if Despegar has the ability to make the continent at worst a duopoly between itself and Booking Group, that means very good things for the company.

So can the company hang on long enough to realize my pie in the sky dreams of first class steamed towels and scotch on the beaches of Mikonos?

In addition, the company entered into a private placement of $200 million with L Catterton and Abu Dhabi based WAHA Capital, which equates to roughly 19% dilution to common shareholders.

This private placement brings the company’s pro forma cash position as of 08/23 to over $420 million. For context, that means that over 87% of the current $487 million market cap of the company is in cash. 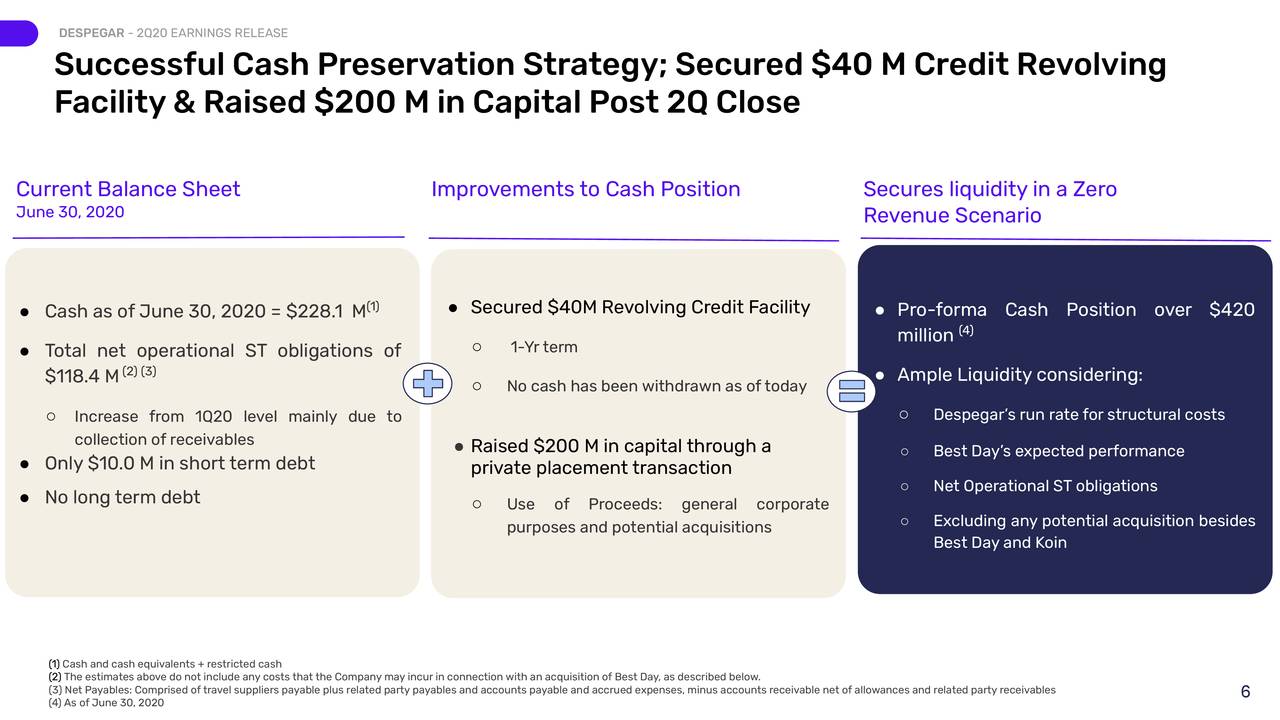 The company has also been extremely transparent with regards to obligations and capital structure during the pandemic and has reported a total of $118.4 million in short-term obligations such as payables due to airlines and other accrued expenses.

The company, as expected, has also trimmed down its costs admirably in 2020, taking its structural costs down from over $51 million per quarter in Q4 2019 to $28 million in Q3 2020, thus amplifying the benefit of running an asset-light, scalable business. 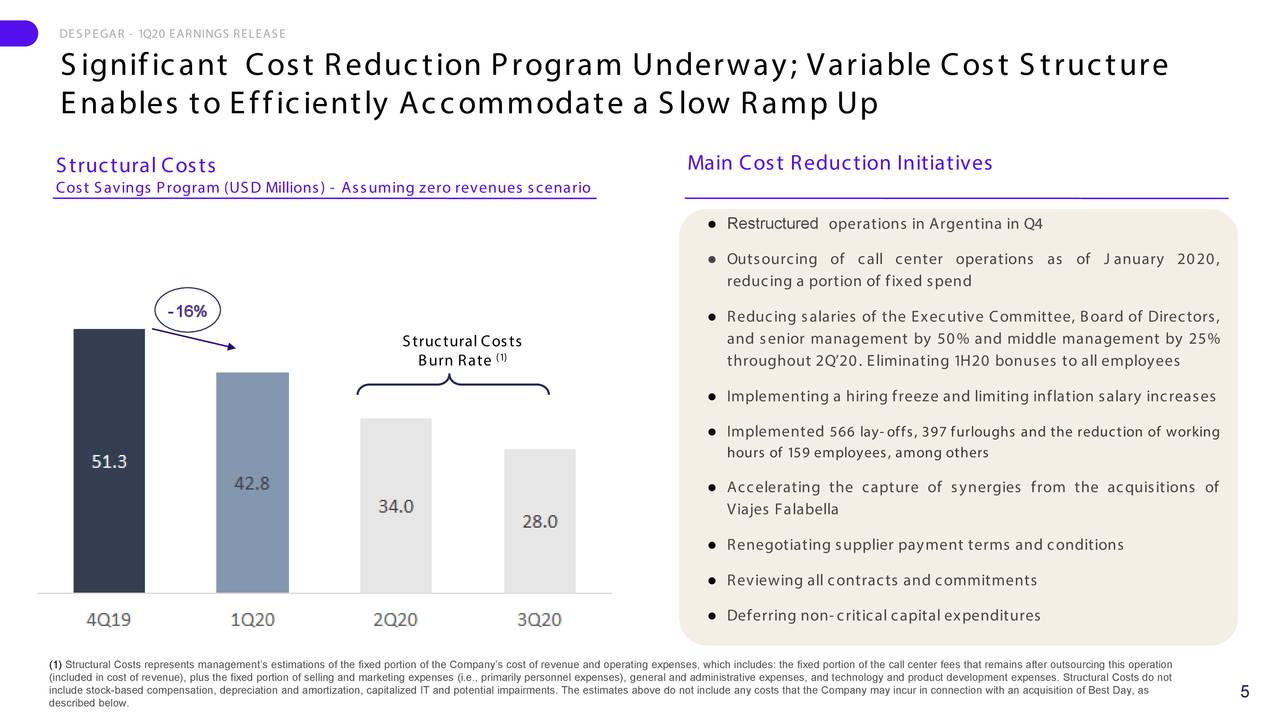 The company has $420 million in cash currently, a $40 million undrawn revolver with $10 million in short-term debt and $118.4 million in expense obligations not related to structural costs, leaving $331.6 million in net liquidity to work with until business returns to cash-neutral.

So let us take the $28 million in structural costs. Although we know it is not, let us just assume for conservatism that it is in a zero revenue situation until Q1 2023 and makes no further improvements to the business’ cost structure (however unlikely that is), which equates to $252 million in cash burned until 2023.

That still leaves $79.6 million in remaining liquidity with no long-term debt under what I consider a ridiculously harsh and unquestionably the worst-case scenario for the company.

Even the most ardent COVID-19 worriers have to concede that travel will be resuming at a high level over 2 plus years from today. I should know, I am one of them!

In my opinion, this is a full-blown “shut up and take my money” scenario for Despegar investors. You have the leading Latin American travel company with ample liquidity, no long-term debt with growth prospects coming out of its ears due to the low online travel penetration in the markets it serves, along with many of the traditional travel agencies it currently competes with, likely to be out of business permanently.

Now this is still a risky stock due to its exposure to South America and the tumultuous political and economic upheavals that are commonplace on the continent forcing Despegar to have to “prove it” to the markets when its America and Europe-focused competition is currently receiving the benefit of the doubt.

I can understand the logic behind that line of thinking and this investment may take some time to pan out; however, looking at the balance sheet and the large margin for error the company has, in my opinion, this company should be trading at $12 currently and has $40 potential written all over it once the travel market returns to growth and investors realize the company will come out of this pandemic much stronger, leaner and more entrenched than when it came in.

I may have just talked myself into a triple down! Thanks for reading and good luck to you.

Disclosure: I am/we are long FB, DESP. I wrote this article myself, and it expresses my own opinions. I am not receiving compensation for it (other than from Seeking Alpha). I have no business relationship with any company whose stock is mentioned in this article.

Additional disclosure: This is an opinion article only. Please consult your licensed financial advisor regarding all investment decisions, I assume no liability herein nor am I writing this article as a solicitation to buy or sell any security mentioned in this article. Please conduct your own independent due diligence on all investment decisions you make with a licensed advisor.