The last few weeks haven’t been kind to coffee bulls. Even as other commodities are showing signs of bottoming – with some already trending higher – coffee prices have fallen to their lowest levels since last October. But the java’s fortunes should soon change, however, given the recent uptick in the Brazilian real and subsequent weakness in the U.S. dollar. Here we’ll discuss the factors which have suppressed prices while looking at the latest currency market developments which should ride to coffee’s rescue this month.

After hitting new contract lows, front-month coffee futures are in limbo as traders wonder if ever the market will reverse course. It’s particularly frustrating to see other soft commodities, like cocoa and sugar, show signs of developing strength while coffee languishes. The latest decline was largely blamed on managed money positions being sold as traders increasingly worried that the current crop in Brazil is bigger than expected. Meanwhile, industry players are trying to gauge the impact on overall demand posed by this spring’s economic shutdowns and subsequent re-openings.

On the harvest front, Brazil’s bean crop is reportedly behind schedule, and reports of labor shortages in some parts of the country continue to circulate. There is also talk that continued harvesting delays could negatively impact the overall quality of the crop. On top of all this, there are some “notable slowdowns and reductions in shipping lanes as well,” according to the latest S&D Coffee & Tea Report.

The futures market, however, obviously doesn’t share these concerns as prices have been in decline for the last two months, as reflected in the following graph. Part of the reason behind falling prices has been COVID-related café closures around the world, which have had a measurable impact on demand. Even as several countries begin to re-open their economies, sit-down coffee shops have been slower to open than other businesses and sales have correspondingly suffered, with specialty roasters feeling this impact most acutely.

It should be noted, though, that the latest decline to the lows in the front-month coffee futures contract occurred on relatively low volume. This suggests the weakness in late May could have been overdone on a near-term basis. The drop of the July futures contract under the pivotal 100 level – a key longer-term support level – should also serve to increase short positions among uninformed participants, in turn setting up a potential short-covering event.

More than any other factor, however, coffee’s currency component should soon help reverse the near-term price slump. In the last two months, weak currency factors kept coffee prices subdued, thanks mainly to the Brazilian real currency (which has an outsized market impact). The real recently fell to all-time lows, putting downward pressure on futures prices.

Indeed, the real’s devaluation proved to be the enemy of exporters as banks reduced credit lines, thereby making it more difficult to export. At the same time, the weak Brazilian currency pushed domestic prices higher and thereby decreased the flow of business.

In the last several days, however, the real has finally commenced a rally from exceptionally “oversold” technical conditions and has returned to April levels (see chart below). Given the Brazilian currency’s outsized impact on bean prices, we should eventually see coffee launch a recovery rally of its own, potentially returning to the mid-point of April’s trading range around the 112 level (see above coffee chart for reference). 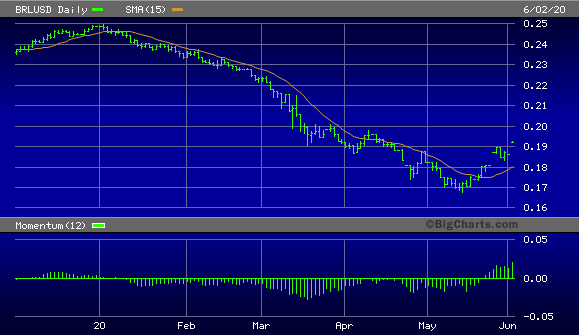 Also supportive of a recovery rally in the coming weeks is the weakness that has lately manifested in the U.S. dollar index (DXY). A weak dollar, more than perhaps any other factor right now, should help support coffee bulls in their attempt at putting a bottom on the latest decline and pushing bean prices higher in the near term. 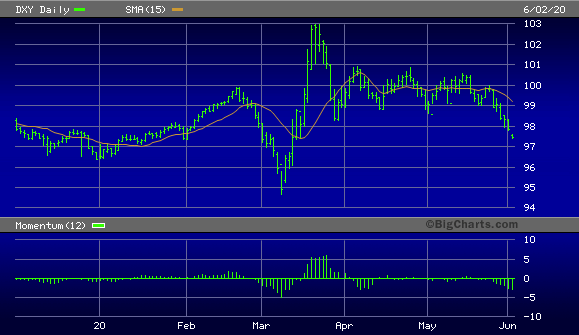 Turning our attention to my favorite java trading vehicle, the iPath Series B Bloomberg Coffee Subindex Total Return ETN (JO) is still in a confirmed immediate-term (1-4 week) downward trend and remains under the 15-day moving average. I was stopped out of my short-term trading position in JO when the 35 level was violated on an intraday basis in April, and I remain on the sidelines as of June 2. As mentioned in my previous commentary, I want to see JO establish a workable bottom before I consider dipping my toes back into the market on a short-term basis (which would equate to a decisive close above the 15-day MA on a weekly basis). Accordingly, I recommend that traders remain defensive for now until we get another confirmed buy signal in the coffee market. 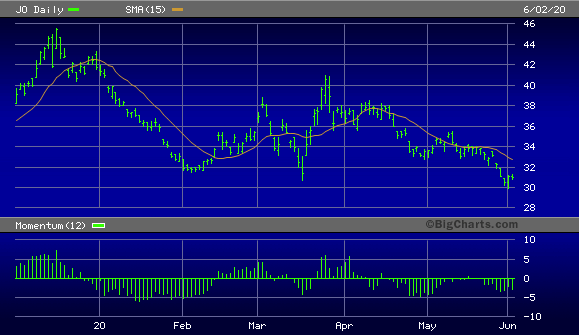 In summary, while the immediate trend remains down, a short-term market bottom for coffee is likely to be seen in the coming weeks as the formerly weak currencies of major producing countries like Brazil show strength while the U.S. dollar in which coffee is priced weakens. Traders should, however, be prepared for some choppiness ahead as an uncertain demand picture remains unresolved. Until we get a confirmed signal that coffee prices have indeed hit the final low, large cash position is still warranted. That said, the weight of evidence discussed here still favors a near-term short-covering rally for coffee in June.

A Little Stability In The Short-Term Charts (Technically Speaking For 3/19)
SPYD: Market Headwinds Reiterate My Neutral View (NYSEARCA:SPYD)
10 Inspiring Facts About Venture Capitalist Mary Meeker
How to be Financially Smart with Your Income
Week 41 MDA Breakout Forecast: Short-Term Picks To Give You An Edge
Operating Profit Margin Ratio
The Weakest 6-Month Momentum Picks From The S&P 100
Christmas Tree Spread with Puts Option Strategy