For Clearway Energy (CWEN, CWEN.A), the next quarterly earnings will be an important one, which warrants an update. First of all, there is the highly anticipated dividend hike. Second, the coronavirus has hurt many businesses across the globe, but this earnings report is a chance to confirm the consensus that Clearway is practically unaffected.

The most significant variable that can be observed by outside analysts is the wind speed near the Alta Wind plant of Clearway, which is located in the Mojave Desert. This is the largest wind farm Clearway has, and it should account for roughly half of the EBITDA variance within the wind segment. The company says that a 5% change in the wind production index can cause a CAFD change of $21 million, or 7% of this year’s CAFD guidance of $310 million.

Source: Author’s own calculations based on data from Weather Underground.

Clearway publishes the regional wind speed index for its assets each quarter, which enables us to track the accuracy of the outside data as well. An example is the table below from the last earnings presentation by Clearway. The weather station data is not always spot on, and in fact, is usually off, but it can often tell the direction of the surprise. An example is Q1 2020, when the Californian wind index was clearly above par, and the wind speeds in the chart above also show an improvement versus last year. Unfortunately for Clearway and its shareholders, the other regions performed poorly enough to sink the index back to par, but the weight of California and its reliance on just one specific asset is usually enough to explain the production index surprise.

To be on track for its annual guidance, Clearway needs to achieve a CAFD of $75-105 million in Q2. The range is broad because of working capital movements and similar items that influence cash available for distribution. A more stable metric is adjusted EBITDA, and this should top $290 million for a satisfactory result, in my view, and the only possible problem is surprisingly low wind speeds across the board.

In summary, there shouldn’t be a big surprise on the EBITDA-side. This quarter is really all about the capital allocation and dividends of Clearway.

As flagged in Q1, the trapped cash from the PG&E (PCG) transaction will be used for funding acquisition and CapEx for the Rattlesnake and Pinnacle wind farms. These projects are expected to contribute $23 million to CAFD, and Clearway updated its pro forma CAFD outlook to $340 million to reflect this. 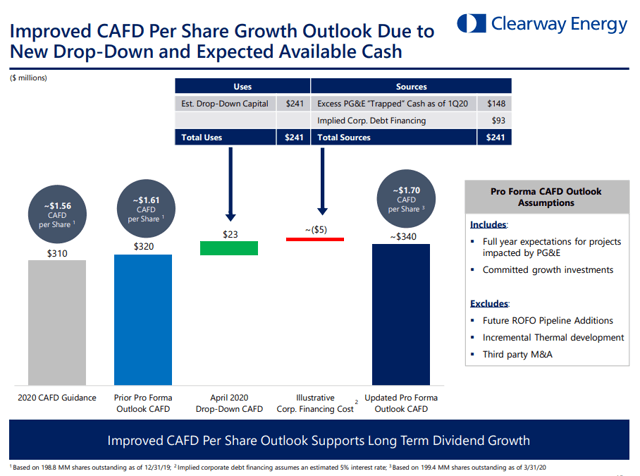 The company could reason that the trapped cash has been spent, and that the September dividend is a payout for the second quarter, during which the cash was still trapped. Clearway has clearly proven to be conservative when it comes to distributions, especially compared to some very aggressive YieldCos, so this reasoning is within the range of possibilities.

Another thing to take into account is the actual timing of cash release. In the last call, management said that the normalization of the dividend level would depend on that. The good news is that it appears to be speedy for NextEra Energy Partners (NEP), which is exposed to PG&E through Desert Sunlight, a project it shares with Clearway Energy. NextEra received cash from Desert Sunlight on the 23rd of July, according to its Q2 10-Q.

Management of Clearway Energy clearly said that the dividend normalization would happen in the back half of 2020, not in 2021. So, in my best estimate, I would put a 60% probability on normalization in September and 40% on December. The payout is expected to land in the 80-85% range of the CAFD run rate of $320 million, which works out to a quarterly dividend of $0.32-0.34.

In other capital allocation news, CWEN decided to sell its residential solar portfolio for $75 million. This asset was somewhat under the radar for me as well, but it appears to be worth $0.38 per share, or 1.5-2% of market cap. I looked it up in the annual report and found the excerpt below. As far as I know, there is no overlap with the consolidated portfolio, which is worth $100 million in my model.

The $75 million valuation for an overlooked equity-accounted asset that was on the books for $24 million shows the value embedded in the assets of Clearway Energy.

Every time I write about Clearway Energy, I get questions about the different share classes, which reminds me to a short recap. Clearway has four share classes, A-D, of which A and C are publicly traded. There were 34.6 million shares of class A outstanding and 79.3 million of class C shares as of April 30, according to the last 10-Q filing. In addition, there is a combined 85.5 million of B and D shares in the hands of Clearway Energy Group (see figure below), bringing the total to 199 million outstanding shares that each have the exact same economic interest in the company.

The most important difference between the C and A shares is that class A shares have 100 times the voting power of class C shares. However, the extra votes are arguably useless, as Global Infrastructure Partners effectively controls the majority of voting shares. For the same reason, all newly issued shares will be class C-shares. This makes not only the current liquidity of the class C-shares superior to that of the A-shares, but also provides the C-shares with a better liquidity outlook. The spreads between the two share classes has fluctuated over time and can be moved in one direction or the other by various events. For example, M&A activity in the YieldCo industry peer group has shown to contract the spread, which makes sense, as the A-shares are worth at least as much as the C-shares to a potential acquirer. 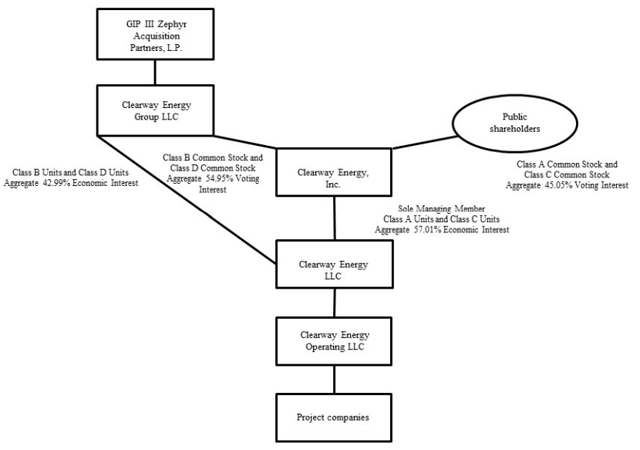 From the perspective of a long-term retail investor, the A-shares are an obvious preferred choice, as they offer a better dividend yield, while liquidity is only an issue for investors that want to hold large stakes. For the company’s valuation in the next section, I will therefore focus on the value of the class A shares.

Below is the multiples table that I often update and post in my YieldCo articles. TerraForm Power (TERP) is still included in the table as a reference, but it is merging with Brookfield Renewable Partners (BEP), so next time, I will be including either BEP or neither of the two.

When reviewing the figures in the table, bear in mind that I used the proportionate debt (adjusted for minorities) and added certain other liabilities for NextEra, as explained in this article. Also note that the latest acquisitions by Clearway Energy are not reflected in the CAFD run rate, as I only include projects that are already owned and paid for by the companies. Until then, I do account for the appropriate net debt level. 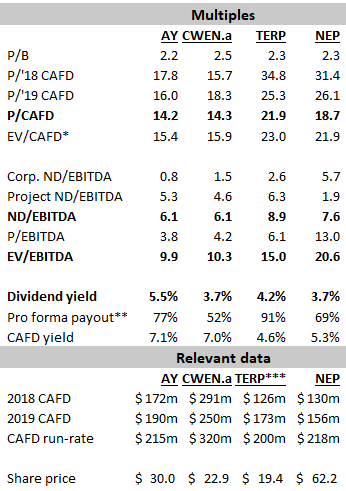 Source: Author’s own calculations and estimates and most recent company data. For NEP, the proportionate share of debt, EBITDA, and CAFD to public unitholders was used after also accounting for convertible preferred shares and financing deals. *Net project debt was excluded from this EV, and interest on corporate debt was added back to CAFD. **Pro forma payout uses run rate CAFD. P/CAFD uses the run-rate CAFD. ***TERP reported and guided CAFD figures are inflated by levelling principal repayments, and the price of TERP is of its last trading date of July 30.

When we look at EV/EBITDA or CAFD valuations, Clearway Energy looks cheap. Only Atlantica Sustainable Infrastructure (AY) is in the same range, but Atlantica has, in my view, lower-quality assets than Clearway Energy. Another element is that Clearway’s assets are located in the US, while Atlantica’s are spread out more globally, with a particular weight on Spain and Latin America. Especially the assets located in Emerging Markets should trade at a lower valuation than the US-based assets of Clearway.

My DCF valuation of Clearway is $25, assuming a discount rate of 8% and the swift release and deployment of the PG&E restricted cash. This leaves a modest 10% upside for the A-shares, but there is also the potential for overvaluation, which has happened to just about every peer. It is perhaps also food for thought that the market seems to disregard debt levels or EBITDA and CAFD valuations. The dividend and dividend growth continue to be very important to YieldCos. So, if we do see a dividend hike announced on Thursday, that will almost certainly move the stock.

Over the past months, we have seen encouraging news that Clearway is able to monetize small assets and continues to buy new ones. I don’t think we will be surprised by the EBITDA or CAFD level, and this is a good thing, as it confirms the stable nature of this renewable power producer. This quarter is all about the normalization of the dividend, and I am quite hopeful that this is the time.

Disclosure: I am/we are long CWEN.A. I wrote this article myself, and it expresses my own opinions. I am not receiving compensation for it (other than from Seeking Alpha). I have no business relationship with any company whose stock is mentioned in this article.

Additional disclosure: I am short CWEN (C-class shares) but have a net long position in Clearway Energy.

3 Powerful Growth Stocks Driven By The Network Effect
Should You Consider a Trading Coach?
De-Risking Your Portfolio Without Giving Up On Strong Returns (Podcast Transcript) (BATS:DRSK)
What is a Hedge Fund?
Arrowhead's New Deal With Takeda Strengthens The Company's Value Proposition (NASDAQ:ARWR)
Weekly High Frequency Indicators: Slow Improvement Has Continued
Square: The Gift That Keeps On Giving (NYSE:SQ)
New And Continued Jobless Claims: Best Week Of The Pandemic, But Can It Survive A New Emergency?