The Federal Reserve released the most recent meeting minutes on Wednesday, which contained an in-depth discussion of forward guidance. The discussion contained the following key points (emphasis added).

The second staff briefing reviewed the yield caps or targets (YCT) policies that the Federal Reserve followed during and after World War II and that the Bank of Japan and the Reserve Bank of Australia are currently employing.

After WWII, the US had a massive debt level. To aid in its repayment, the Fed implemented a yield curve control policy to control interest rates (The NY Fed wrote a blog post containing links to longer pieces on this topic). It’s key to remember that yield curve control policies didn’t just appear in the Great Recession. They’ve been implemented before. And the Fed approves:

In their discussion of forward guidance and large-scale asset purchases, participants agreed that the Committee has had extensive experience with these tools, that they were effective in the wake of the previous recession, that they have become key parts of the monetary policy toolkit, and that, as a result, they have important roles to play in supporting the attainment of the Committee’s maximum-employment and price-stability goals.

Despite any potential controversy caused by these policies, expect them to be used when necessary – like now.

The only thing that would prevent the Fed from not only lowering rates but also keeping them low is inflation. Thankfully, the spare capacity created by the 2Q20 slowdown has eliminated this risk:

Let’s look at charts of the data, starting with the PCE price indexes:Both overall (left chart) and core rates (right chart) dropped sharply as a result of the slowdown. But even when the economy was growing modestly in the years before the pandemic, there was no meaningful price pressure.

Both measures of CPI – which is more limited in scope – shows a similar pattern.

The Federal Reserve’s preferred coincidental indicator is the labor force. Let’s take a look at some key data as presented by the Atlanta Fed to underscore the size of the current problem: 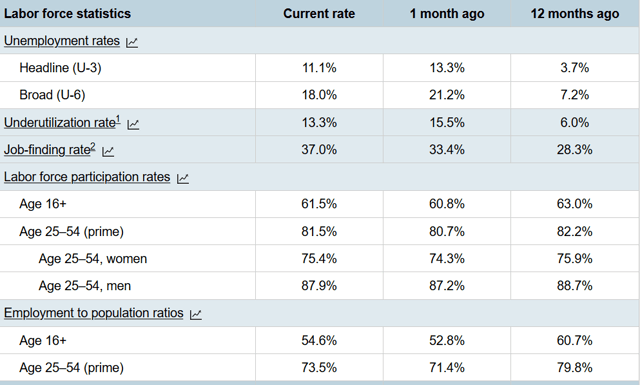 The depth of the problem is enormous. U-6 has doubled in the past year; U-3 has tripled. The underutilization rate has doubled. The employment to population ratio for prime-aged people has collapsed.

The number of unemployed people has increased by 11.7 million. The number of people who are part-time for economic reasons is up 4.7 million. And remember, most of this damage has occurred in the last 3-4 months.

Here’s the participation rate based on educational achievement:

Workers with less than or only a high school diploma have fled the labor force.

Finally, there is still a continued increase in the number of people unemployed:

The four-week moving average of the initial unemployment claims spiked to its highest level since the mid-1960s.

The last year of data shows that the average is still over 1-million.

San Francisco Federal Reserve Bank President Mary Daly on Wednesday painted a grim picture of the U.S. economic outlook, saying that even under her best-case scenario unemployment will still top 10% at year’s end and won’t return to pre-crisis levels for four or five years.

“If we can get the public health issues under control either through a really robust mitigation strategy or a vaccine, then we can reengage in economic activity really quickly,” Daly told Washington Post Live in a virtual program. “Then it could take just four years or five years; but if we end up with a pervasive long-lasting hit to the economy, then it could take longer.”

This jibes with Chicago Fed President Evans, who recently said that he’s projecting slower growth due to various localities having to re-implement containment strategies to slow the virus’ spread.

The U.S. economy is showing signs of a turnaround as businesses reopen, but the pace of the recovery is being slowed by large-scale virus outbreaks in some states and it could be years before the economy is back at full strength, New York Federal Reserve Bank President John Williams said on Tuesday.

The economic recovery from the crisis spurred by the novel coronavirus could proceed more slowly than policymakers initially anticipated, potentially including a second wave of infections in the fall and another increase in the unemployment rate, Minneapolis Federal Reserve Bank President Neel Kashkari said on Friday.

Key will be the mortgage forbearance programs that were enacted in the spring.

Here’s the main takeaway: the economy has suffered a massive blow. There is no real possibility of inflation due to the massive drop in utilization. The labor market is in tatters. The consensus among Fed governors is that we’ll continue to see spikes in the virus further slowing recovery.

Rates will be low for a very long time.