The shares of Boingo Wireless (WIFI), a wireless infrastructure company, didn’t have a good year:

Yet, at first sight, there seems to be little wrong on a fundamental basis:

Solid revenue, EBITDA growth, and the company almost reached break-even. There is at least one tailwind as wireless network traffic is set to grow significantly (August IR presentation): 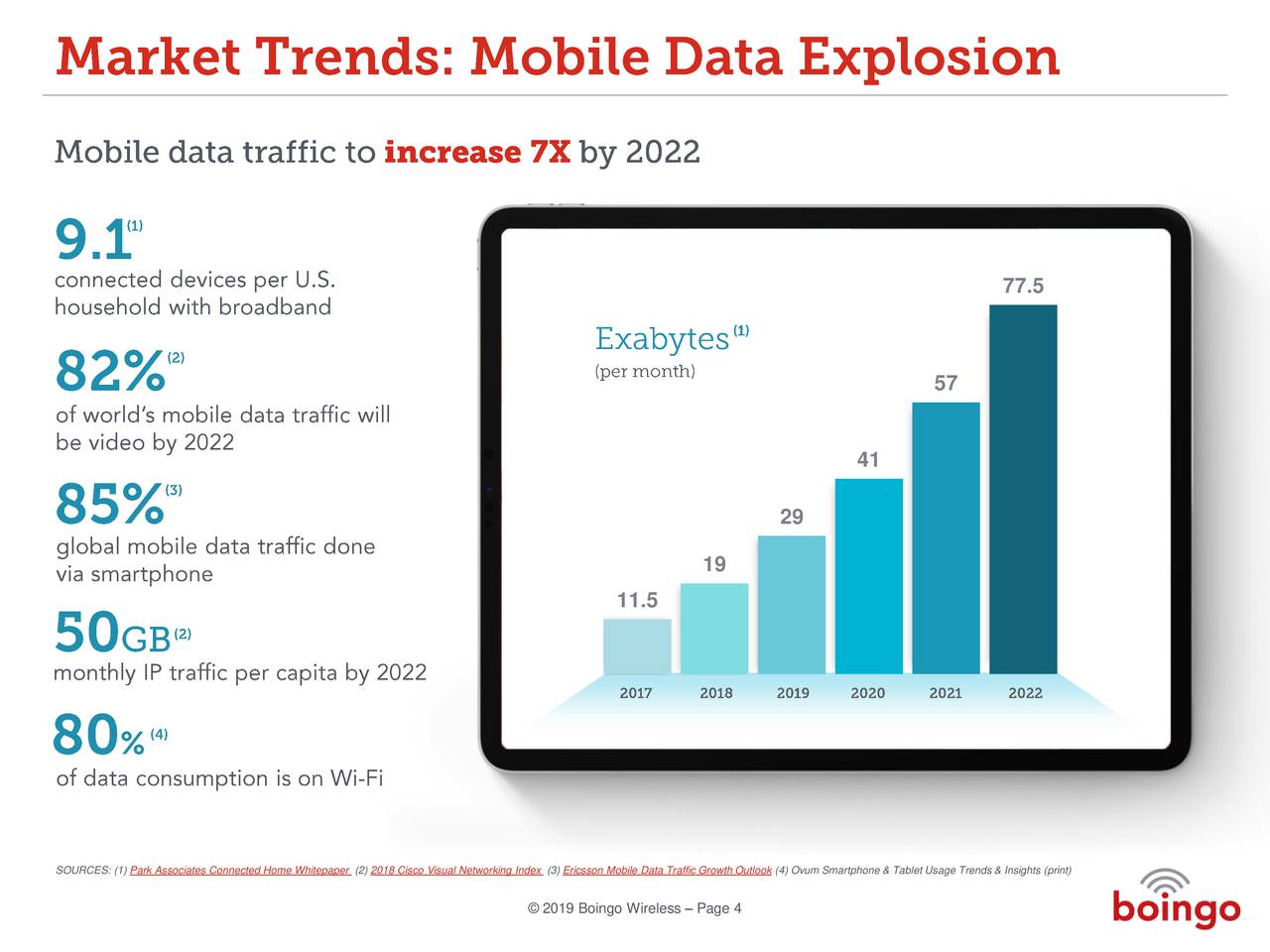 Apart from the declining retail segment and a very small advertising segment, the company has three main segments: 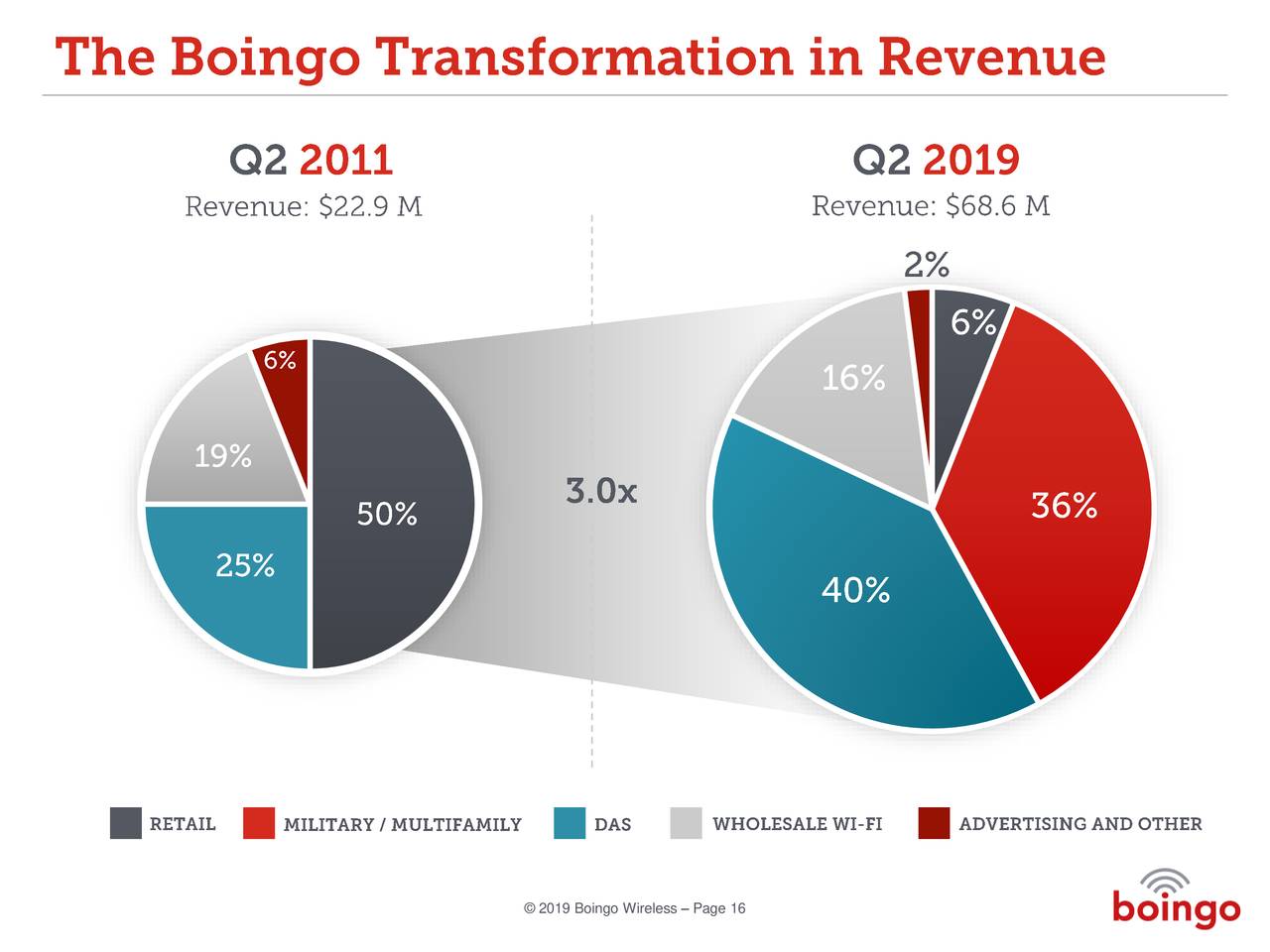 The company installs small cell towers indoors in high-density venues to increase coverage for carriers, and it is the biggest indoor network provider in the US with 35K+ nodes and another 12K nodes in backlog. From the August IR presentation: 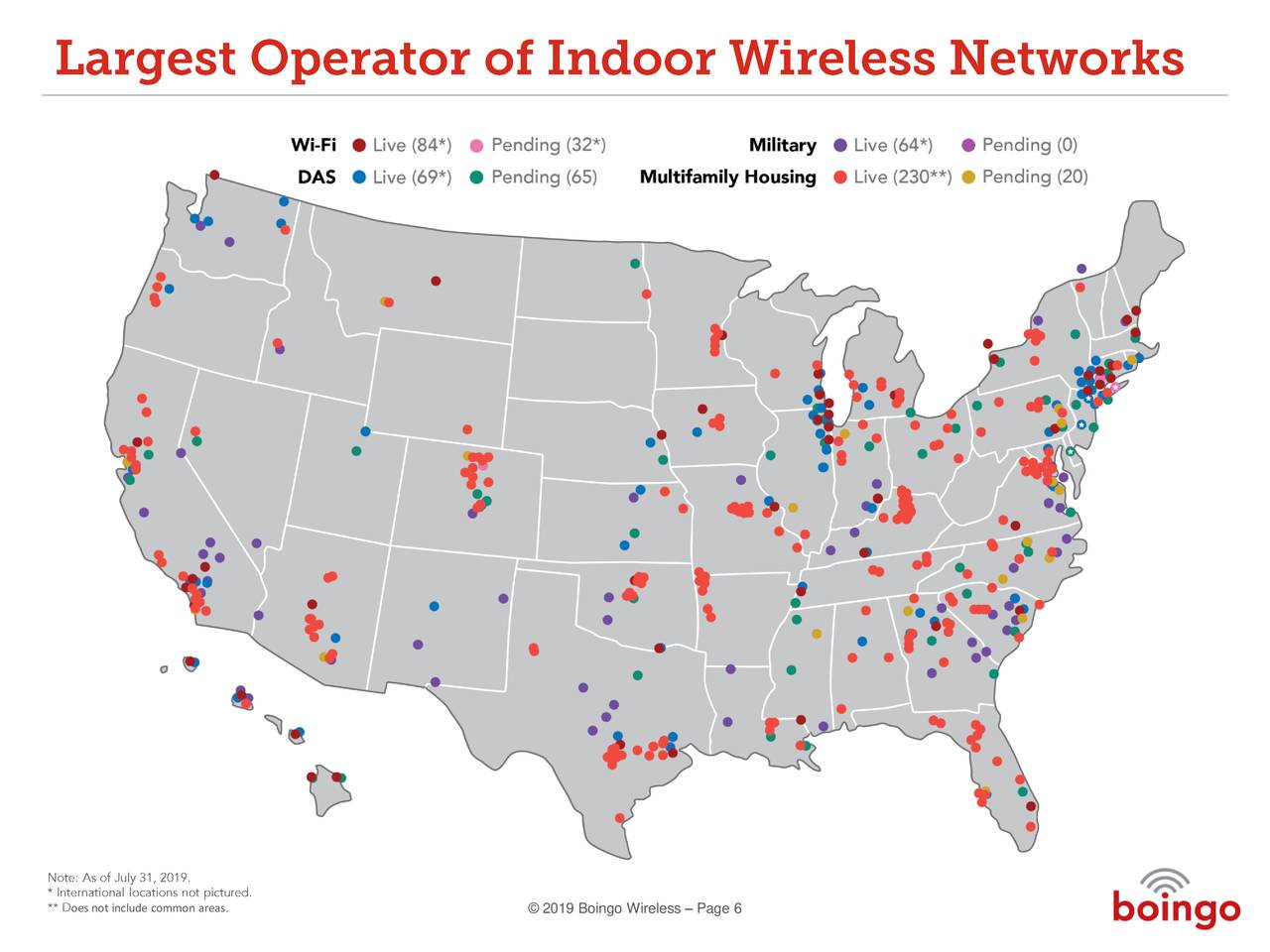 The DAS access fee was up by a whopping 81% in Q2, but much of this was the result of a one-time gain (the result of an amendment and contract extension with one of their major carrier customers). Without this one-time gain growth was still very good, at 30%, from the August IR presentation: 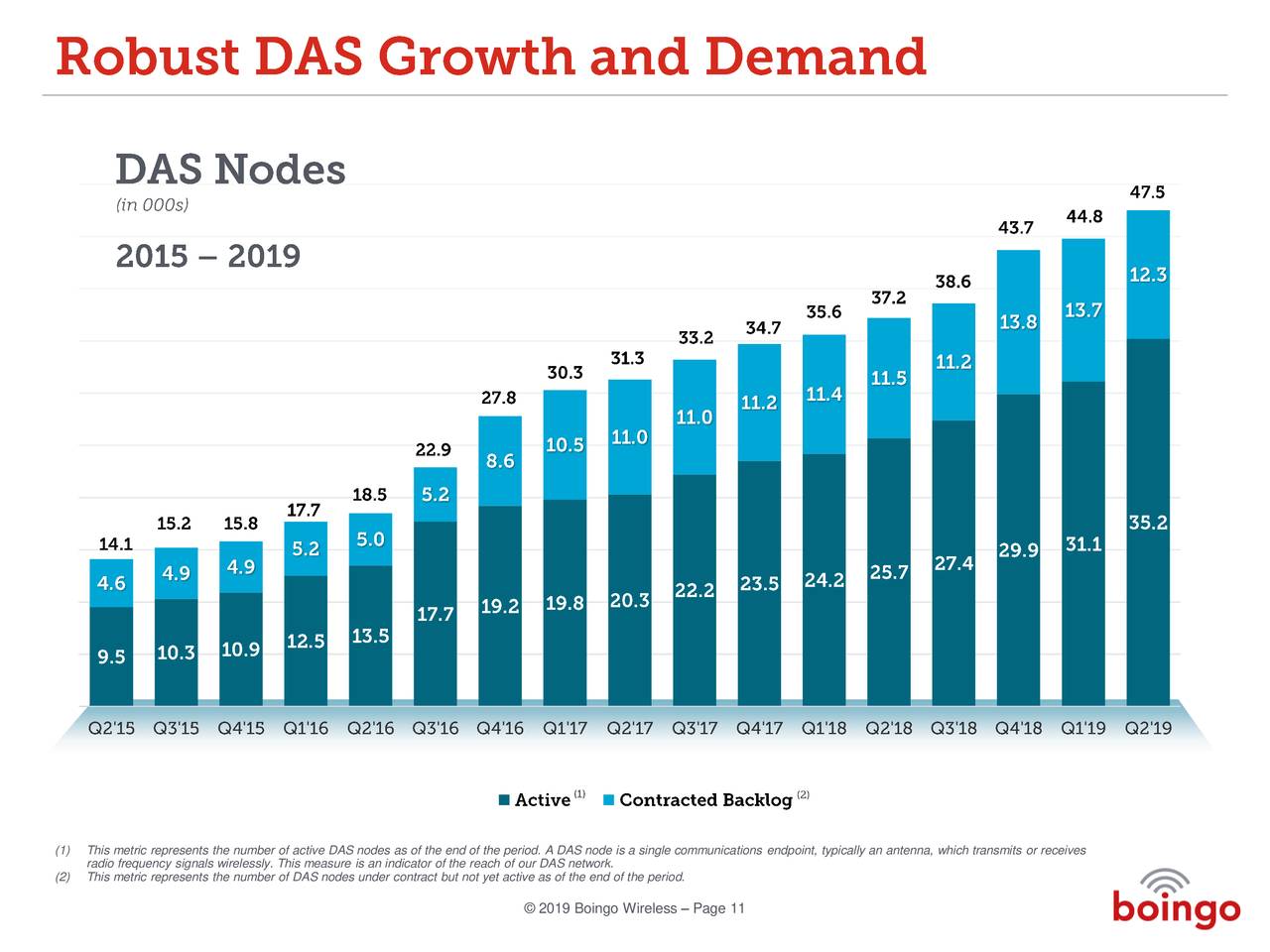 our DAS runway continues to be strong with another 65 venues in backlog. Our backlog includes venues like MTA Long Island Railroad and Grand Central Terminal Eastside access in New York City.

The company can deal with all kinds of technologies (Q2CC):

We will deploy the technology that makes sense for each venue, whether that’s 5G, 4G LTE with a 5G upgrade path, Wi-Fi 6, private LTE, CBRS or other wireless technology that evolves 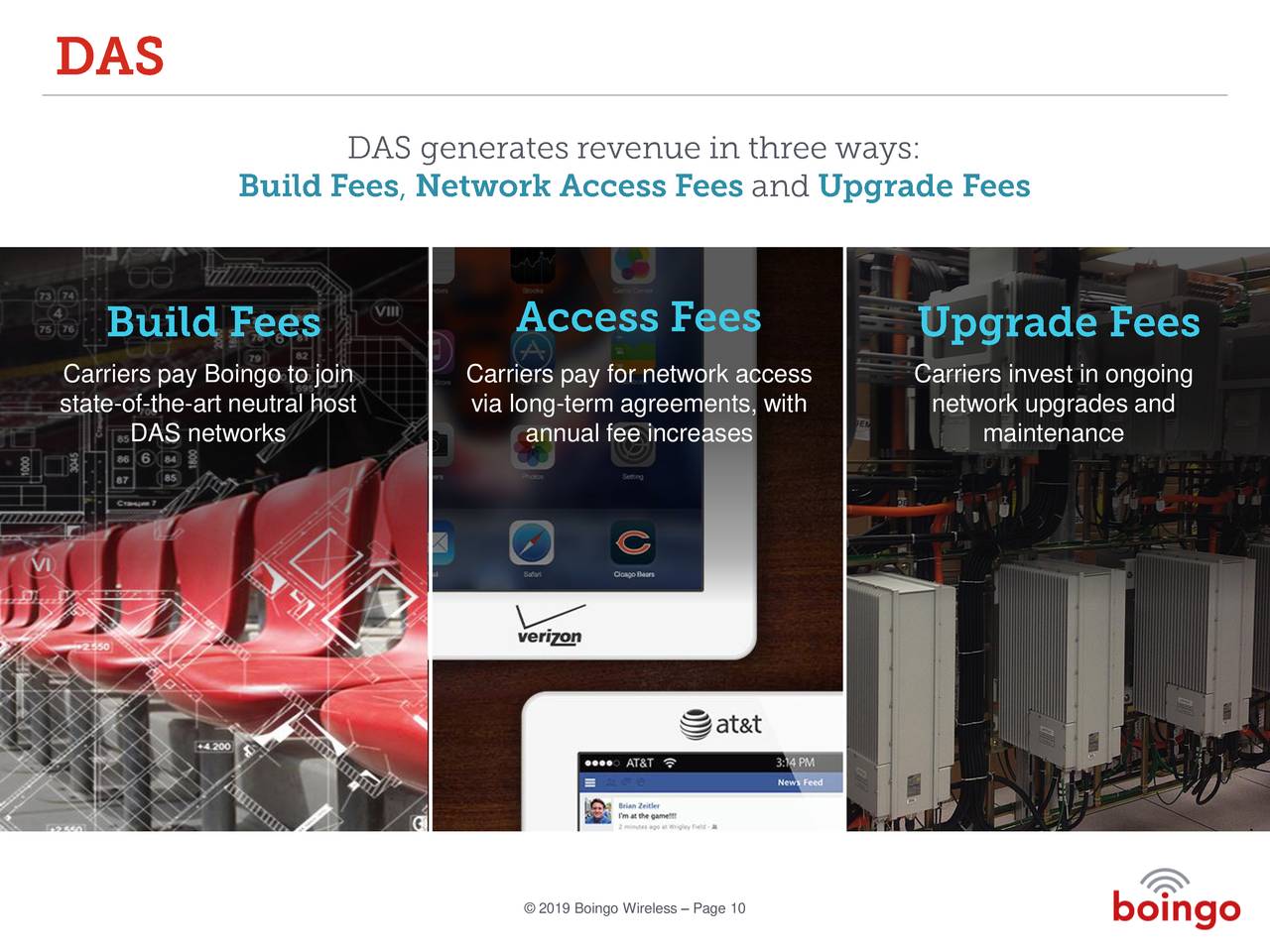 Although the construction of many venues is financed by the carriers, it requires the company to spend quite a bit of CapEx: 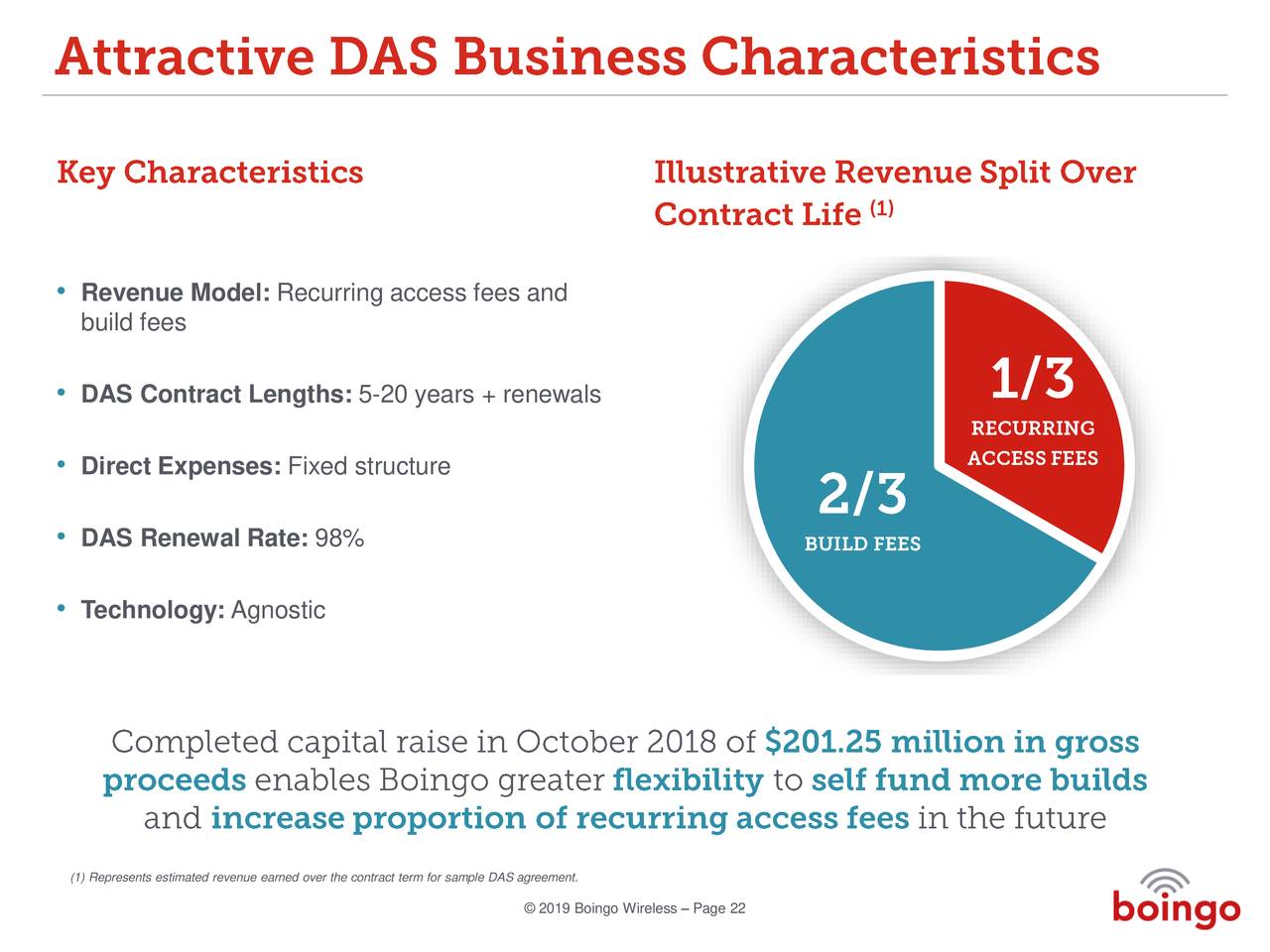 I’ve had strategic discussions with executive leadership of each of the Tier 1 carriers. These meetings lead me to be very bullish about the opportunities ahead for Boingo, whether that’s DAS upgrades, the launch of new technology like CBRS, private LTE, 5G or Wi-Fi 6; we believe the opportunities to partner with carriers is greater than perhaps at any time in Boingo’s history.

Indeed, there is considerable progress on some of these newer technologies:

The ICD approval of CBRS is an exciting milestone that enables Boingo to deploy private LTE and IoT networks, and facilitate carrier offloading to the 3.5 GHz band.” A CBRS pioneer, Boingo deployed the first known CBRS network at a major airport when it launched a private LTE cellular network on the 3.5 GHz band at Dallas Love Field Airport, which services more than 15 million passengers annually.

We covered the opportunities of CBRS in our previous article, although needless to say progress has been way too slow.

The penetration rate in most suitable venues is still quite low (from the August IR presentation): 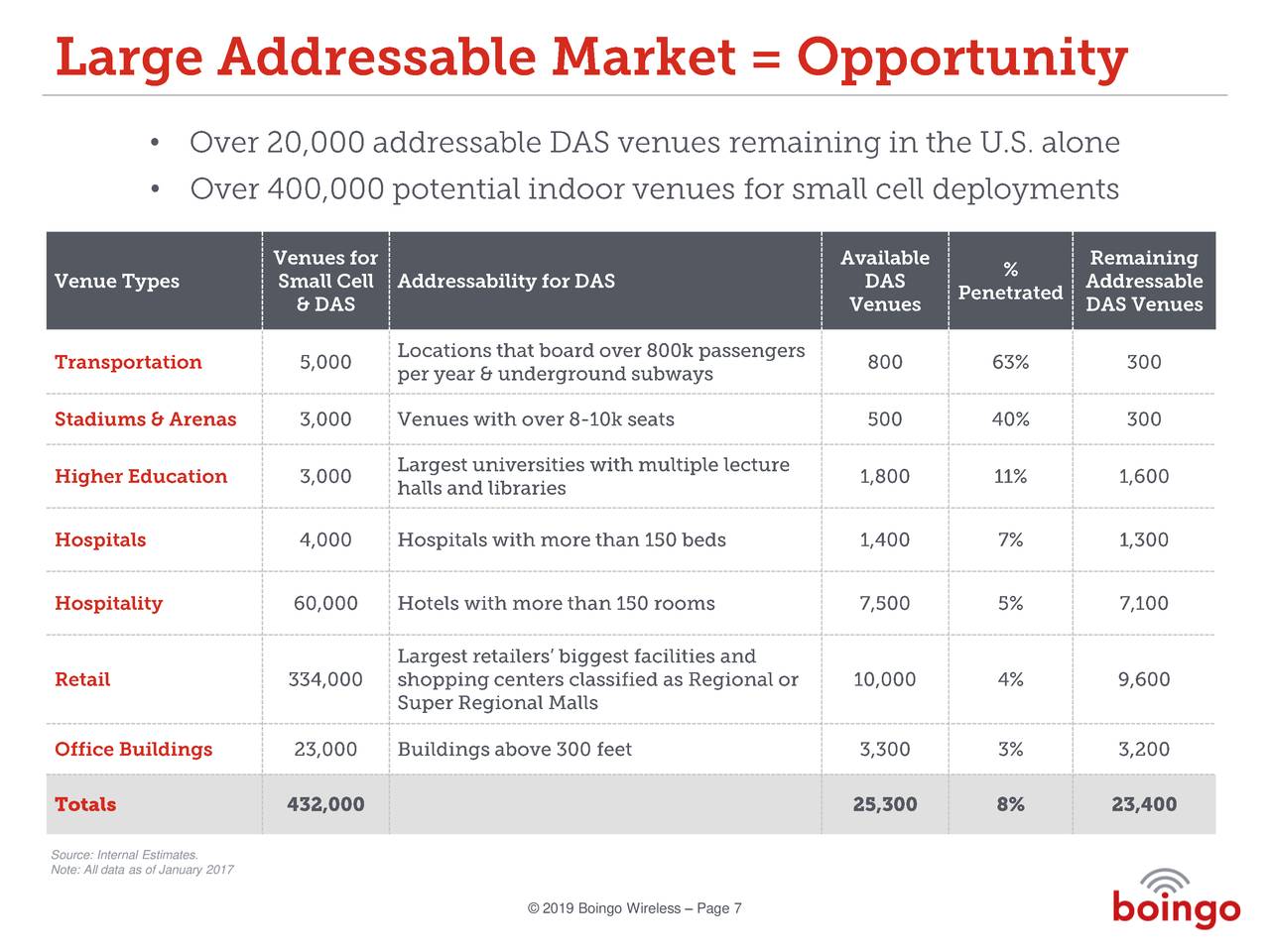 And the win rate is much higher compared to the competition: 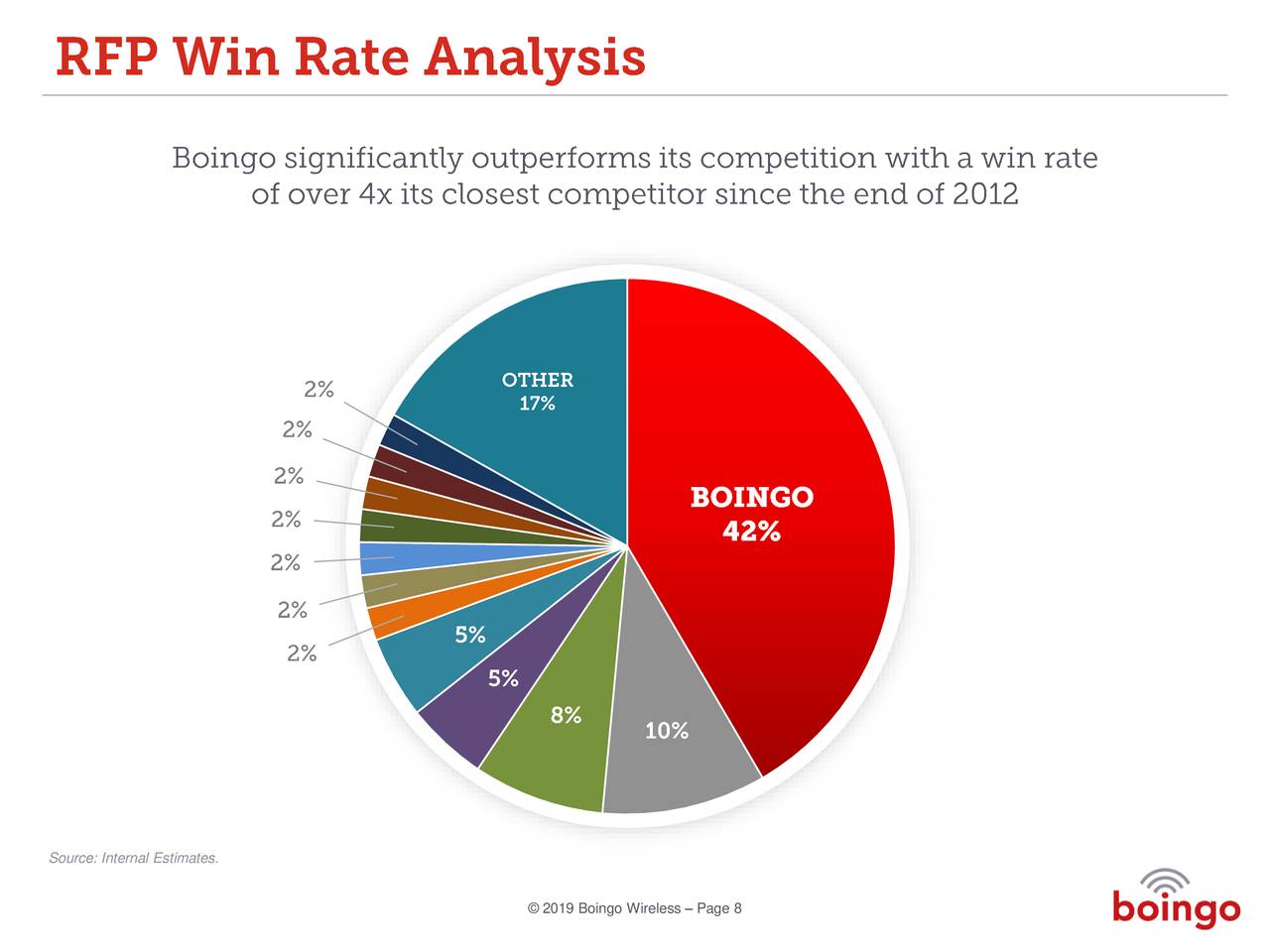 Another way in which carriers deal with dense traffic venues is through carrier offload, that is, shifting customers from cellular to WiFi networks. This is a service that Boingo provides. 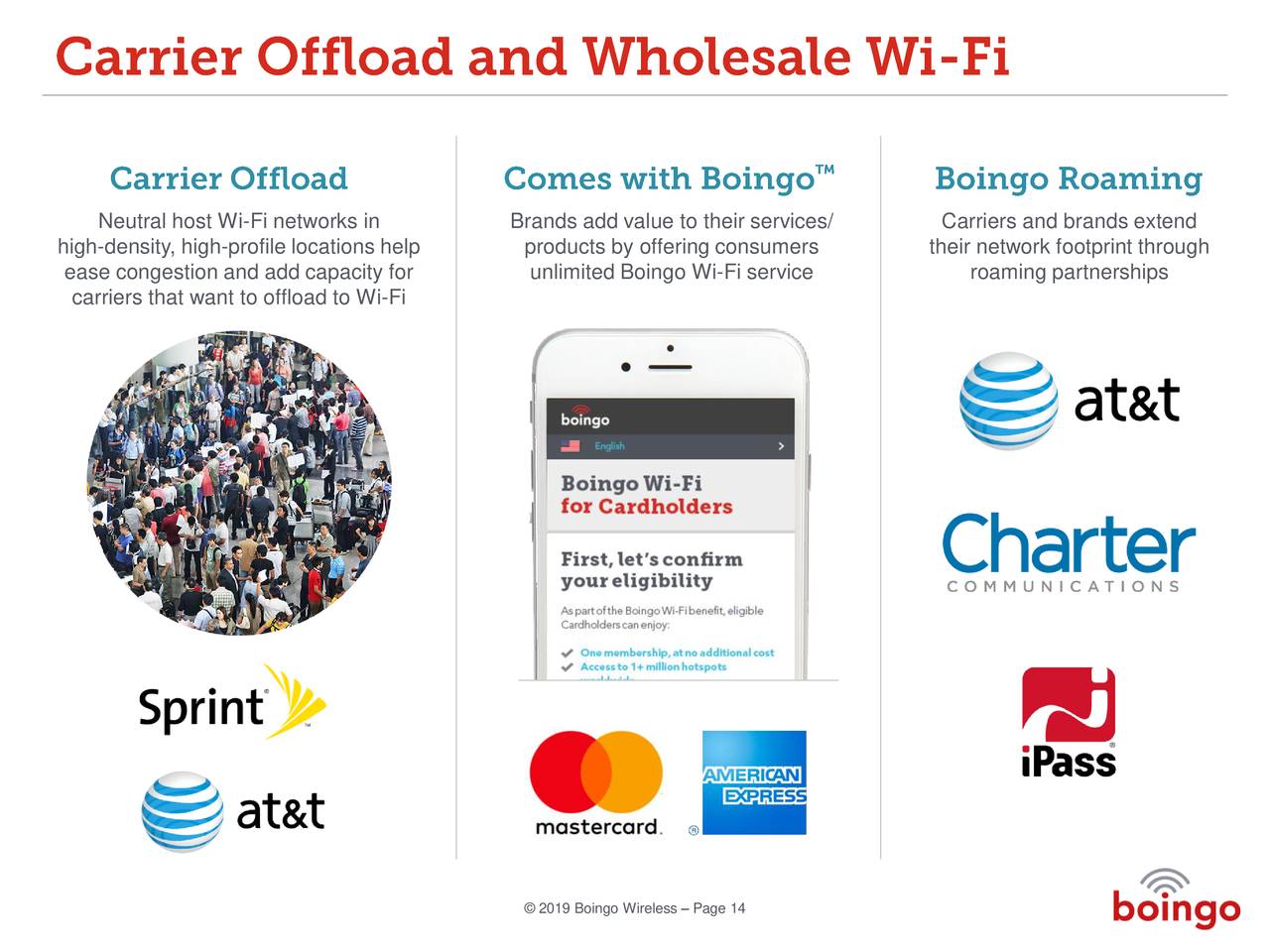 While offload traffic increased by 54% (y/y), wholesale WiFi revenue declined 20.8% y/y to $10.7M due to lower partner usage base fees and the phasing out of the American Express (NYSE:AXP) program with Comes with Boingo.

The company has Sprint (S) and AT&T (T) life here, but management keeps arguing that it’s a matter of time before the other carriers sign up.

From the August IR presentation: 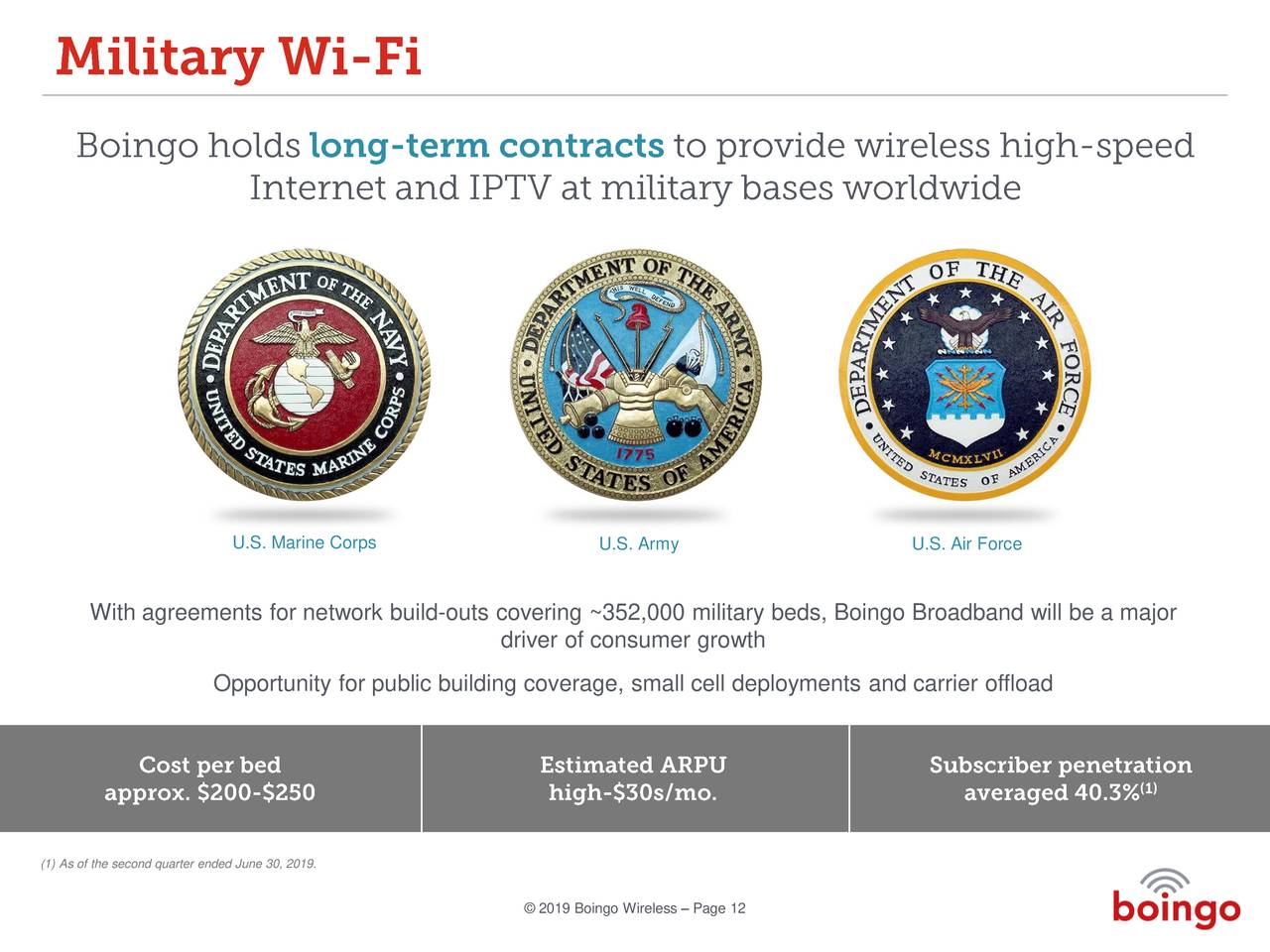 The company added 6,000 new beds in Q2 for a total of 352K beds and revenue from the Military was up 10.6% y/y with ARPU rising 11.6%, although penetration rate dipped to 40.3%, management blames this on the summer season when troop movement is higher.

The experience with the military has set up the company to address similar verticals like multi-family buildings, which got another impulse through the acquisition of Elauwit last year which is active in student residents. 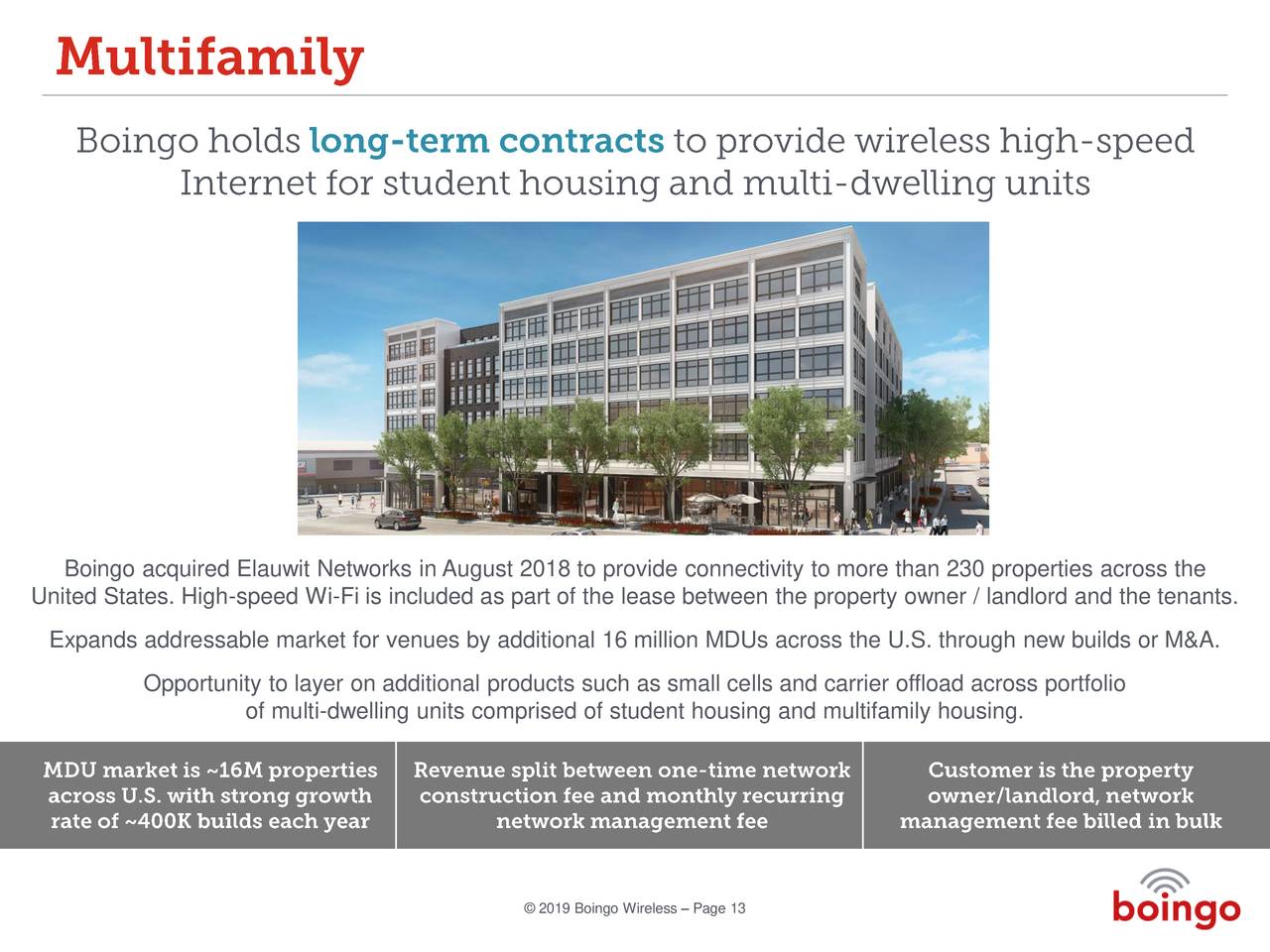 The company has 230 properties live, with another 20 under contract, and they are taking care of selecting properties to increase margins here.

Together, revenue from military/multifamily was down 5.8% sequentially but up 45.8% y/y to $24.4M, much of this driven by a $5.9M increase in multifamily revenue due to the Elauwit Networks acquisition.

The company is in talks with major REITs in order to accelerate the build-out of multifamily networks.

From the August IR presentation: 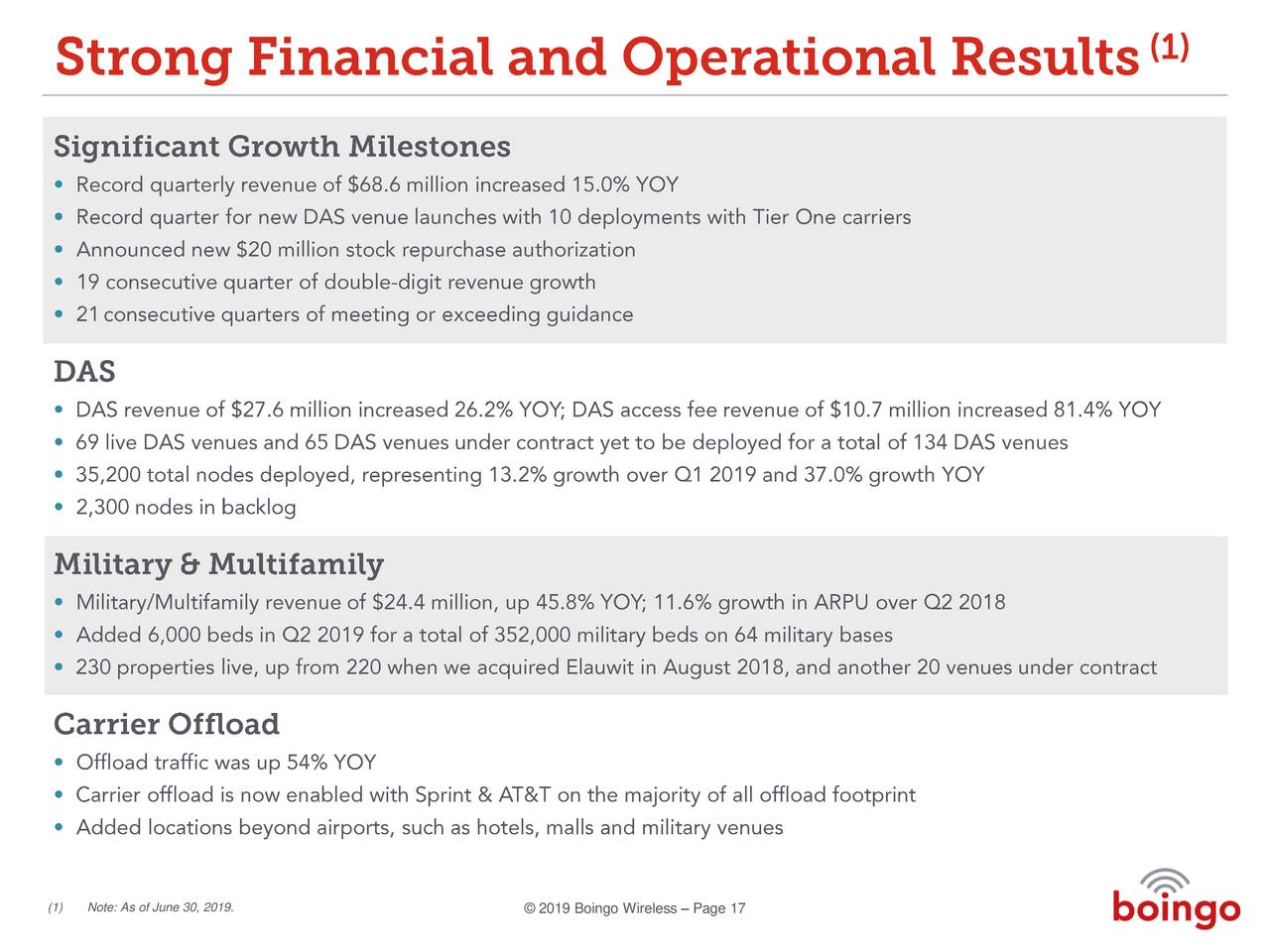 Overall, revenue increased by 15% y/y to $68.6M with the growth coming from DAS and military/multifamily with wholesale, retail and advertising declining.

The revenue guidance actually entails a sequential decline, which management blames on near-term softness in multifamily sales. Management does reiterate their full-year guidance:

Both revenue, as well as adjusted EBITDA, are impacted considerably by the re-amortization of deferred revenue from contract extensions in 2019, reducing revenue growth by 7.2% and adjusted EBITDA by 19.6 points, although not affecting cash flow.

Analysts noticed that the reiteration of FY2019 guidance combined with the guided sequential decline in Q3 implies a large ramp in Q4. Indeed, management argues Q4 revenue will be between $70M and $80M.

In part, this is because Q3 is the low point of the re-amortization of deferred revenue.

Gross margins (revenue minus network access cost) were down 306bp y/y to 56.5% due to product mix (a shift towards lower margin multifamily and DAS build revenue).

While things have improved, the company’s business model isn’t yet inherently profitable. Q2 GAAP operating margin isn’t representative because of a one-off gain from an extension and amendment of a carrier DAS contract.

While the company generates a steady flow of operational cash, free cash flow has been declining because of CapEx and a large increase in receivables. On the former (Q2CC):

Capital expenditures were $41.4 million for the second quarter, which included $34.3 million utilized for DAS infrastructure buildout projects that are primarily reimbursed through revenue by our telecom operator partners. Our non-reimbursed capital expenditures were driven mainly by new network builds, managed and operated network upgrades and various infrastructure upgrades and enhancements. As a reminder, we estimate our annual maintenance capital requirements, which excludes all growth capital, to be approximately 3% to 5% of revenue.

DAS CapEx is guided at $75M-$90M for 2019 and non-DAS, CapEx is still quite significant, guided at $25M to $30M for 2019, with the majority allocated to support new network builds and upgrades in the company’s managed and operated venues.

As a result, cash balance went down by $35.7M to $70.2M, but management blames this on the timing of receivables (by $35.6M mostly due to the 10 newly launched DAS venues in the quarter) and working capital.

We should also not forget that the company already has a considerable amount of debt, standing at $167.2M at the end of Q2.

The timing is a little odd, given the deterioration in free cash flow, that the board has approved a $20M buyback program, but, on the other hand, the share price has fallen quite a lot, here is the rationalization (Q2CC):

underscoring the high level of confidence our board and management team have in the long-term prospects for growth. We strongly believe that the current share price is not indicative of Boingo’s current or long-term intrinsic value.

Without positive free cash flow, the company had to resort to debt financing in October last year issuing a $201.5M convertible note. Apart from the 1% interest rate the company has amortized (10-Q):

The EBITDA margin is the lowest it has been for at least five years, but we’re not convinced this is the right measure, given the company’s substantial interest payments and especially CapEx.

Analysts don’t see profitability in the near future with EPS at -$0.27 this year falling to -$0.29 the next.

The substantial debt and deteriorating cash flow pose a significant risk, even if structural cash flow isn’t as bad as the last couple of quarters.

The company is still in a ‘land-grab’ phase and not too much should be expected in terms of profitability or cash generation as it is still cementing its position in multiple segments, each of which has runway left.

But the DAS segment requires considerable CapEx, even if much of that is reimbursed by carriers. But this keeps the company from reaching profitability and generating cash, at least for now.

The build out of multifamily buildings is taking more time than management anticipated and we’re not entirely sure why that is. The WiFi offload isn’t growing in the last couple of quarters.

Growth requires considerable CapEx which has so far kept the company from profitability and (with the exception of a few quarters) generating cash. While the present free cash outflow is exaggerated because of timing issues, this isn’t likely to change anytime soon, we fear.

It will either change when they are so large that CapEx becomes a smaller part with respect to revenues, or when they reduce CapEx, but that will reduce growth as well, but at least that opens the perspective of profits and cash flows.

The problem we have with Boingo is that until now, the business model hasn’t displayed all that much leverage. This can change though if management is right and more carriers sign up to their DAS and WiFi offload venues, which would be a big positive for the shares.

On the longer-term perspective of slower growth but profits and cash flow, and the possibility of leverage increasing carrier signing we think the shares are a buy, but only a moderate one, given the debt and cash flow situation.