Over the last month, Boeing (

The reason why Boeing soared to nearly $400 was the impressive backlog topping 5,300 commercial jets. The airline appeared to have a guaranteed path to revenue and cash flow growth for years until the 737 Max debacle and the coronavirus virtual shutdown of global air travel.

In May, Boeing delivered only four airplanes for the lowest level in 60 years. The company had 18 order cancellations, pushing the backlog down despite the limited deliveries. The backlog is now down to 4,744 commercial jets, led by the 737 at 3,776 outstanding orders. 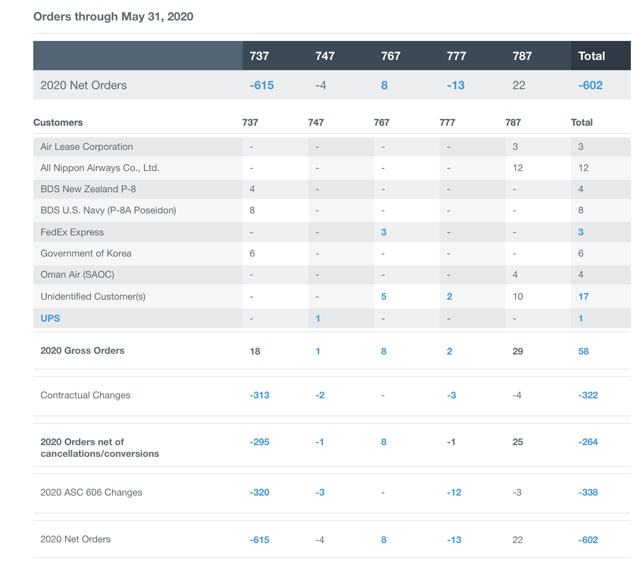 According to IATA, the airline passenger travel sector is set to lose over $84 billion this year and another $16 billion next year. Air travel isn’t predicted to return to the 2019 levels until 2023 in a scenario that greatly reduces the need of customers to take delivery of new jets.

Even the COVID-19 second wave fears are a big problem for Boeing. Any surge in new cases that reduces travel demand will delay any return to commercial jet purchases by the major global airlines. Airlines such as American Airlines Group (AAL) have already retired over 100 planes due to the prediction of an extended period of lower demand.

The trade group has the dire outlook of $16 billion losses in 2021 without a second wave impact:

Provided there is not a second and more damaging wave of COVID-19, the worst of the collapse in traffic is likely behind us.

My theory is that these deliveries will only further highlight the lack of new order demand and whittle down the backlog. Airlines such as Southwest Airlines (LUV) and American Airlines with parked 737 Max planes will likely see future order demand reduced by having these planes returned to service.

A cyclical manufacturing stock with production issues and a damaged customer base wasn’t worth 20x forward EPS estimates at the peak near $400 and sure isn’t worth 30x updated 2021 estimates here after doubling off the lows. Analysts now predict Boeing earning between $7 and $10 per share in 2021 and 2022.

Boeing obtains over 40% of its business from the defense and global services sector, which are providing some stability to revenues, while the commercial side is nearly shut down. Though, the defense sector has traditionally had lower operating margins.

Due to the 737 Max delivery halt, Boeing was already burning cash at a fast clip. The company burned $2.7 billion in Q4 and $4.3 billion for all of 2019. These numbers were even worse in Q1, with free cash flow collapsing $4.7 billion.

In the process, Boeing has gone from slight net debt levels prior to 2019 to now seeing the balance balloon to $23.4 billion. By the end of March, the company had seen total debt rise to $38.9 billion, prior to borrowing $25.0 billion in a massive debt offering.

Based on an EV approaching $150 billion, Boeing trades at an even more stretched 34x multiple. The prospects for the company beating estimates don’t appear promising with the decimated customer base.

The key investor takeaway is that Boeing shouldn’t rally with the airline sector. The airplane manufacturer needs the airline sector to return to cash flow-positive scenarios and repay debt before these companies will purchase new planes. In the meantime, the company will see pressure on its order book that will hurt the stock when investors realize each new delivery actually reduces the need for additional orders.

Investors should fade the rally in Boeing.

Looking for a portfolio of ideas like this one? Members of DIY Value Investing get exclusive access to our model portfolios plus so much more. Signup today to see the stocks bought by my Out Fox model during this market crash.

Disclosure: I am/we are long AAL. I wrote this article myself, and it expresses my own opinions. I am not receiving compensation for it (other than from Seeking Alpha). I have no business relationship with any company whose stock is mentioned in this article.

Additional disclosure: The information contained herein is for informational purposes only. Nothing in this article should be taken as a solicitation to purchase or sell securities. Before buying or selling any stock you should do your own research and reach your own conclusion or consult a financial advisor. Investing includes risks, including loss of principal.

ChannelAdvisor: Buy The Stock Around The Current Price (NYSE:ECOM)
Kronos Worldwide: Both Risky And Appealing 7.5% Dividend Opportunity (NYSE:KRO)
Humana: High Multiple Might Not Be Sustainable (NYSE:HUM)
A Little Stability In The Short-Term Charts (Technically Speaking For 3/19)
Arbitrage Opportunities In BlackRock Muni Closed-End Fund Reorganizations
6 Stocks I Just Bought For My Retirement Portfolio - Hong Kong Edition
How COVID Panic Can Be Leading To A New 'Goldilocks' Scenario
Midas Gold: A Billion-Dollar Question (OTCMKTS:MDRPF)