Widely held investing wisdom states that when “stocks fall bonds rise”, and therefore, that wise investors should own a diversified mixture of both assets. In general, this is true, and it is an undeniable fact that a “60/40” bond-stock portfolio has delivered greater risk-adjusted returns over the past few decades than either asset.

This is demonstrated using a portfolio made up of 30% of international bonds, 30% of U.S long-term Treasuries, 20% U.S equities, and 20% international equities. As you can see below, this allocation strategy has delivered solid and relatively consistent long-term returns:

On average, this strategy has delivered 7.3% annualized returns, with the worst year seeing only a 10% drawdown. However, if you look closely at the log-scale chart, you can see that its annualized returns have been slowly diminishing. In fact, it has only seen a 5.5% CAGR over the past five years.

Worst of all is perhaps international bonds, such as those in the Vanguard Total International Bond ETF (BNDX), which currently has an abysmal yield-to-maturity of only 60 bps. At such a low yield, it would take 133 years to double your money (after accounting for its 8 bps expense ratio). Accounting for inflation, which tends toward 2% globally, investors in BNDX are essentially guaranteed to lose purchasing power every year.

Don’t get me wrong, I believe equities are overvalued, but compared to bonds, they are arguably dirt cheap. The primary reason being that a company’s profits are likely to rise given an increase in inflation, while bonds will only be devalued. In international markets, inflation has been on the decline since around 1980, so this is largely an unseen risk today. However, with global central banks rapidly increasing the global money supply in an effort to wade off the economic fallout of COVID-19, this is a very significant risk.

The risk is perhaps greatest in developed international markets. BNDX has significant exposure to Europe (57% of holdings) and Japan (19% of holdings), as you can see below: 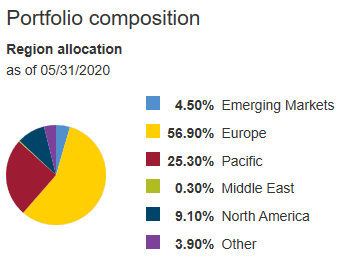 Further, around three-quarters of its holdings are in government debt, with a longer weighted-average maturity of 10 years. This gives BNDX a duration of 8.3 years, which means a 1% increase in its yield would cause the fund to decline 8.3% in value. In other words, a 1% increase in yields would take roughly 8.3 years before investors recover their losses. This is important because it goes to show the hidden risk of a rise in yields to BNDX holders. Consider, a 5% rise in yields due to an inflationary shock would likely cause BNDX to lose around half of its value.

It is partly true that these bonds generally lack credit risk, since governments can mint their own currency. Whether or not this is true in Europe is unclear, but it is true that the ECB has vastly expanded its money supply in order to finance its constituents’ COVID-19 deficits. Thus, it is likely true so long as all European Union members are in a similar position.

Beware of Rising Inflation in Europe

You may note that BNDX has had much better returns than 60 bps per year (its current yield) over the past five years. This may cause some to be deceived into believing rates will continue to decline into negative territory and boost the fund’s total returns. Unlike stocks, bonds do not trend and are statistically much more prone to “mean reversion” than other asset classes. This is to say when bonds rise, they often fall, and vice versa. They have recently risen, and thus, are more likely to fall soon.

The underlying trend in government bonds is attributed to inflation. A decline in inflation boosts the present value of bonds, and vice versa. It is true that inflation has been very low in Europe, but that is largely due to low energy prices, as well as the increase of U.S natural gas via LNG into Europe. If you exclude energy prices and food prices via “core inflation”, it is clear that Europe’s inflation rate is actually rising behind the scenes. See below:

As you can see, Europe’s core inflation rate has been on the rise since about 2015, and it even rose during the recent COVID-19 crisis months. This is also true for Europe’s food inflation, which is at a long-term high.

It is true that Europe has “low inflation” today, which partly justifies its zero-to-negative rate environment; however, it is a mirage. Once energy prices rebound (even if slightly), Europe will see a rapid spike in inflation, which will cause bond investors to realize just how much purchasing power they’re losing. Most likely, this will result in a bond crash once the European Central Bank makes this realization and becomes more hawkish. Recent discussions suggest this may already be happening.

However, it is worth pointing out that the core ownership of a government bond is money. Basic economics teaches that value comes from scarcity and a lack of scarcity eventually destroys value. During times like today (and a decade prior), Europe and Japan’s central banks have created vast quantities of money in order to finance stimulative deficits. Further, both Japan and Europe now employ “Yield Curve Control” within their QE programs, which artificially lowers the yield of long-term bonds, such as those in BNDX, in order to keep the curve flat. If it were not for such programs, BNDX would likely trade at a lower price but deliver a materially higher yield.

This is demonstrated in the European and Japanese yield curves below. As you can see, there is essentially no added return by buying riskier long-term government bonds in these regions:

As you can see, the yield curves of both regions have been pinned down since around 2015 and have been essentially flat since 2019. 10-year bonds have more risk than short-term bonds, since they have a higher duration, but investors in BNDX are not being compensated for that risk due to central bank yield curve control.

In the short run, this will likely keep BNDX from seeing any rapid declines. Every day, new money is being created that mechanically buys BNDX’s underlying bonds. As long as headline inflation is low, the European and Japanese central banks can do this without ramifications. However, inflation is rising in Europe, which will likely soon become clear to ECB leaders and force them to end their current curve-suppressive QE program. This is less true in Japan today (which has a core inflation rate of about 0), but inflation has a tendency to spread like a virus.

Perhaps not immediately, but in the near future, BNDX (and similar funds) will likely show its true colors. This is a fund whose value is almost entirely propped up by temporary and reversible central bank actions. We witnessed the early phase of this in March, when the fund lost 6% of its value in a matter of weeks. The losses stopped once the central banks expanded their quantitative easing programs by buying BNDX’s constituents with new money.

Contrary to the beliefs of some, these programs cannot be maintained forever; the piper must be paid. The sole limit on QE is inflation. Oil prices recently crashed, so inflation seems very low across all developed countries. However, in Europe and in the U.S (which is excluded from BNDX but still important), core inflation is generally rising and is far higher than long-term bond yields.

This is perhaps the first global recession in decades that is not seeing a meaningful decline in inflation rates, which is yet another signal that we are headed toward a period of secular inflation. If so, BNDX and similar funds, such as the U.S. TLT and IEF, as well as the corporate high-grade bond market (LQD), are all likely to decline significantly in value over the coming years. Due to aggressive monetary expansion today, as well as a very complacent market, I would argue the risk is highest in the near term.

If you’re looking for (much) more research, I run the Core-Satellite Dossier here on Seeking Alpha. The marketplace service provides an array of in-depth portfolios as well as weekly commodity and economic research reports. Additionally, we provide actionable investment and trade ideas designed to give you an edge on the crowd.

As an added benefit, we’re allowing each new member one exclusive pick where they can have us provide in-depth research on any company or ETF they’d like. You can learn about what we can do for you here.

Disclosure: I/we have no positions in any stocks mentioned, but may initiate a short position in TLT, BNDX over the next 72 hours. I wrote this article myself, and it expresses my own opinions. I am not receiving compensation for it (other than from Seeking Alpha). I have no business relationship with any company whose stock is mentioned in this article.