The AUD/CHF currency pair, which expresses the value of the Australian dollar in terms of the Swiss franc, tends to push higher on the back of positive global risk sentiment. When global markets are constructive, pricing in economic growth and stability, commodity currencies such as AUD usually strengthen against safe-haven currencies like CHF.

While AUD/CHF collapsed in Q1 2020, the pair was able to return to its “pre-COVID” trading range fairly quickly after significant fiscal and monetary interventions had the effect of propping up risk asset prices and pro-risk currency pairs. With oil prices still lower than at the start of the year (to the tune of approximately one third lower), net-importers of crude oil have benefited disproportionately; this includes Australia.

Most recently, however, AUD/CHF is starting to soften; the pair is currently off its recent highs at the 0.67 handle (September 2020), now trading just under the 0.65 handle in October 2020.

AUD/CHF has historically been a positive-carry pair, which has meant that buying AUD in terms of CHF has enabled traders (especially those using leverage) to pocket interest income on the spread. Funding rates, especially after brokerage fees factored in, are often quite different to those short-term target rates set by central banks. Nevertheless, central bank target rates are useful proxies to start with, as these rates do ultimately feed into funding markets. The Reserve Bank of Australia’s current target is +0.25%, while the Swiss National Bank’s target is still -0.75% (negative). The spread is therefore still in favor of AUD/CHF upside by +100 basis points.

However, this spread is quite a bit tighter than it used to be. It was in mid-January 2015 that the SNB cut its short-term interest rate deeply into negative territory. This was the same month in which the SNB abandoned the EUR/CHF peg, which saw the euro propped up at around 1.20 (it subsequently fell dramatically to about 1.00 that month). The negative rate was to help support the euro longer term, although in recent years this has clearly not been enough. It is perhaps no wonder considering the high level demand for CHF while EUR rates are almost equally negative (the European Central Bank’s deposit facility rate is -0.50%).

Still, in a low-rate world, AUD/CHF is at least positive-carry (not costly to hold with leverage, unlike some other pairs). Yet with such low interest rate differentials, inflation rates become even more important to monitor. In the table below I take recent, year-over-year inflation rates for Australia and Switzerland to calculate inflation-adjusted rates (to help find a proxy for the real yield of AUD/CHF). The change is what is important, not necessarily the absolute value at present.

Australia posts quarterly inflation rates, while Switzerland posts monthly inflation rates (both year over year). As shown above (if we use the month of June 2020 for Swiss inflation, to compare with Australia’s Q2 2020 reading), the implied real yield has not changed that much (only 10 basis points in favor of AUD/CHF strength). However, perhaps this dynamic is rather beneficial for AUD/CHF, considering that CHF rates are still deeply negative (notwithstanding its current deflation), while AUD rates are still positive. Yet recent deflation seen from Australia does not particularly bode well for future AUD rates either, unfortunately.

Third-quarter inflation data, perhaps most importantly for Australia, will be important to watch. Positive inflation rates might support AUD, since it will show the country’s ability to possibly hike rates in the long-term future (at the very least before Switzerland). Overall, this could support confidence in AUD. However, it is also worth noting that in spite of the positive-carry of AUD/CHF, the chart above rather clearly shows that the inflation-adjusted yield is flat (in fact zero in our table for the second quarter). Perhaps there is very little bias for AUD/CHF with respect to rates and inflation. All that matters on this front is the capacity of either nation to demonstrate an ability to return to higher rates in future, and going by history it is probably Australia that will eventually win on this front.

Purchasing Power Parity models measure the relative purchasing power of currencies, and attempt to retrieve fair value figures for currencies based on these international trade relations. I construct the model below using the OECD’s PPP model data. I add upper and lower bands for context (each 30% from the rolling fair-value figure).

As evidenced by the chart above, AUD/CHF is rather undervalued based on the most recent 2019 PPP fair value estimate of 0.80 (versus the current market price of just under 0.65). That is almost 19% undervalued, implying potential upside of about 23%. As we saw following the Global Financial Crisis of 2008/09, AUD/CHF does have an ability to ramp higher to its fair value following crises. Yet as we can see in the early 2000s, the pair also has shown an ability to collapse to a position of what can only be described as trading at a deep discount to fair value. This is all about confidence and sentiment.

Both Australia and Switzerland are small countries, and hence AUD/CHF can be quite volatile given that international capital flows tend to amplify outcomes concerning currencies with smaller markets (relative to the majors, which include USD, EUR and JPY; the most liquid currencies). With practically no bias on the interest rate front (after inflation), sentiment is key here. Deflation in Switzerland, and either inflation (or modest deflation) in Australia in the medium term will probably lend to either a slightly lower but otherwise relatively stable PPP-implied fair value in 2020. Yet it will be global sentiment that determines whether AUD/CHF will hit the 0.80 handle in the medium- to long-term.

Given that we already had a sharp crash this year, and given that interest rates are extremely low today (and will likely remain so for a long time), it is possible that stocks remain elevated over the long term. Absent another sharp crash (with continued and heavy monetary interventions staving off asset price collapses), it is possible that both risk-free rates and equity risk premia will remain suppressed across the globe. This should lend to either stable or higher risk asset prices, which would (all else equal) typically support pro-risk pairs such as AUD/CHF.

Near-term risks include the U.S. presidential election (November 2020 and perhaps beyond), Brexit (year-end, although while a negative outcome could strengthen CHF further the effect may be limited), and the current second wave of COVID-19 into the winter season. Further government-imposed lock-downs and fearful consumers could send oil prices down lower, which would inadvertently benefit currencies like AUD. However, the economic shock would probably hurt commodity currencies like AUD initially, and support safe havens like CHF.

Looking at this pair on balance, I can see near-term risks that could push this pair lower, or at the very least see AUD consolidate in a tight trading range versus CHF. Yet longer term, there is the potential for AUD/CHF move higher as this negative energy is released over the medium to long term. Crises are called crises because they present markedly different (and problematic) circumstances that differ in nature to otherwise stable conditions. The world overcomes crises with time, and I doubt this time will be any different (I believe this is both an optimistic and rational perspective to take).

Therefore, AUD/CHF looks a little risky in the short to medium term, but I believe in the medium to long term, this pair will eventually rebound higher in the long term (to revisit its fair value; circa 0.80). The analogy would be a “J-curve.” 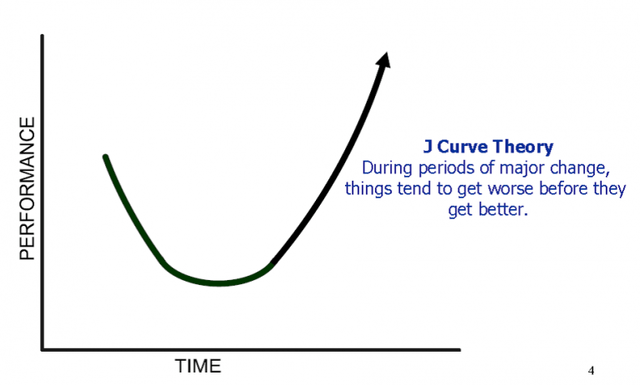 I would not be jumping into a long position on this currency, especially with how strongly the Swiss franc has been favored over the years. I would, however, be unsurprised to see any short-term weakness create support levels which ultimately enable AUD to move higher in the long term. A medium-term time horizon (perhaps anywhere from 3-12 months) may also align well with a need for a weaker CHF to enable Switzerland to rebalance its current account surplus higher (which has recently dipped, owing in part to the strong CHF). One must also monitor the SNB’s actions, as I wrote about recently too, as the SNB could perhaps single-handedly revert the franc’s bullish course.

Truckers, executives worry about a macro-recession
Who Will Win The Lucrative Autonomous Vehicles (Robotaxis) Race?
Air Products: A Durable Business Creating Shareholder Value (NYSE:APD)
The third quarter was a dud for stocks, but the fourth quarter could be full of surprises
Energy Transfer: Political Blowback (NYSE:ET)
Wind Energy Looks Set To Boom This Decade - A Look At The Key Stocks To Consider
Visa Vs. Mastercard: Titans In The Fintech Arena (NYSE:MA)
Why Williams-Sonoma Is A COVID-19 Winner (NYSE:WSM)