The state of Arizona is very rich in mineral resources. It is the largest copper producing state, which is why Freeport-McMoRan (

Source: Created by the author

Northern Vertex operates the Moss Resource in Northwest Arizona just an hour and a half south of Las Vegas. The mine is an open-pit gold-silver mine that processes north of 5,000 tonnes per day of ore. In Q2, ending June 2020, the company produced 11,365 gold equivalent ounces. As the company has ramped up production since the quarter ending June 2019, it has seen a decrease in its AISC from $1,549 per ounce to $1,077 per ounce.

Before the company began production, it conducted a pre-feasibility economic assessment in 2017 that projected a 10-year mine life with an NPV of $133 million and 63% IRR. Today, Northern Vertex is focusing on expanding the mine life with an expanded drilling program while maintaining profitability and improving the balance sheet.

The Moss Mine has a total measured and indicated resources estimate of 360,000 gold ounces and 4.4 million silver ounces.

The company currently has insider ownership of around 10 percent, with 40 percent being held by the high-net-worth community, including Eric Sprott. There are a substantial amount of warrants and options (over 105 million shares-worth) with a strike price of $.40 and $1.04, so I would expect those prices to be substantial hurdle prices for the stock. With 250 million shares outstanding, adding 90 million shares worth of warrants will significantly dilute the shares from today’s level, assuming they get exercised. Here’s a look at the schedule for the warrants.

The company currently has a book value of $44 million and operating cash flow of $6 million. It also currently trades with a market cap of $85 million.

Today, based on the number of shares outstanding and the warrants and options, I would not invest in Northern Vertex. If I were to invest in Northern Vertex, I would need to understand just how much it believes it can grow the resources and reserves. There would need to be enough growth to justify a higher valuation, assuming all warrants and options were exercised. Today, I either don’t have enough information, or I’m not convinced that there is going to be enough reserve growth.

The slide below visually demonstrates how it has been able to grow the resource estimates since production started. Perhaps this can continue and even accelerate. With gold prices rising, it could even mean Northern Vertex is undervalued today. I just wouldn’t be confident enough to invest, given other opportunities in the marketplace. 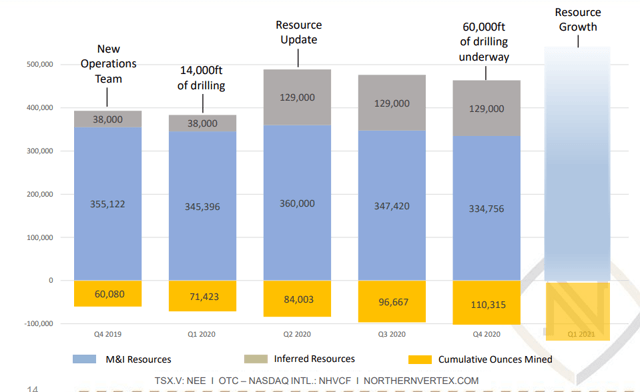 Allegiant Gold is an exploration stage company with several projects scattered throughout the United States. Several are in Nevada, with three more being in New Mexico and Arizona. I would not classify Allegiant Gold as an investment-stage company at this point, but I am open to changing my mind as more information becomes available.

On a positive side, Allegiant has completed several private placements that value its shares at about $.21 per share but also come with half of a warrant exercisable at $.45 per share. Today, Allegiant shares are trading at about $.2 per share.

Its projects in Arizona and New Mexico include:

Allegiant Gold currently trades with a market cap of about $20 million.

The Kerr Mines Copperstone Project is located in La Paz County, Arizona, within the Walker Lane mineral belt. Due to being a producer historically, the project has an existing infrastructure and is fully permitted. From 1987 to 1993, the mine produced 500 thousand ounces of gold.

The company has measured and indicated resources of 276 thousand gold ounces.

The economic analysis from the PFS indicated an NPV of $25 million and an IRR of 40 percent assuming a gold price of $1,250 per ounce. With gold prices where they are currently (+$1,900/oz), I’m sure the NPV would land somewhere around double or triple the original $25 million. 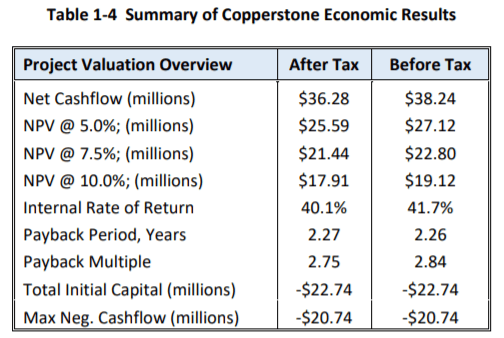 However, with the stock currently trading with a market cap of $35 million and a project with an NPV slightly above that, I don’t believe there is a significant upside to investing in Kerr Mines at this point.

Patriot Gold Corp. is a gold exploration company that discovered the Moss Mine and currently holds a 3 percent net smelter royalty on that project. It currently has various other projects in the pipeline, including another royalty on the Nevada Bruner project. It seems that its business model is to turn exploration projects into royalties for the company. The company currently trades with a market cap of $4.5 million.

GMV Minerals is the owner of the Mexican Hat project, located in Cochise County, Arizona. The project is expected to be an open-pit heap-leach mine and is in the early exploration phase. It has inferred resources of 651,000 gold ounces. Metallurgical testing has confirmed that greater than 90 percent of the gold in the ore is recoverable.

GMV conducted a preliminary economic assessment (PEA) in 2019, and results showed a life of mine of 5 years and an IRR of 33 percent. With an all-in-sustaining cost of $764 per ounce, the project looks attractive. 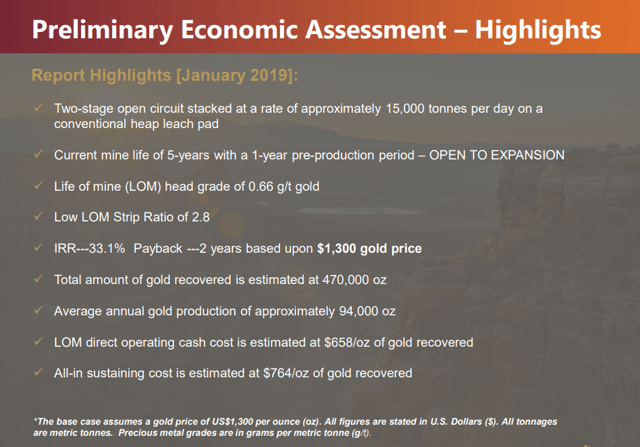 Here is a simple plan created for its presentation that shows its development timeline.

GMV Minerals currently trades at a market cap of $12 million. With this project, I appreciate the company giving a clear timeline. And if I knew what its projected capital cost and the net present value of the project were, I might be inclined to have more interest. Unfortunately, the IRR is only relative to the amount of money invested. However, with a market cap of only $12 million, this one has some potential to appreciate as it moves along the development timeline.

Arizona Metals Corp. is a gold exploration company with two projects currently in Arizona. The projects are in the exploration stage but do appear to have potential. Most of what investors have to go off of is from historical results, although the company does have some current test drill results. The following slide best summarizes where it is at in the exploration process with the Kay Mine and Sugarloaf Mine. 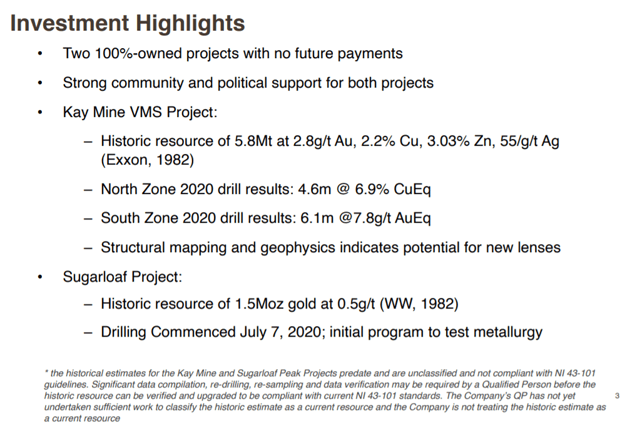 Arizona is a state rich in resources and is the number one copper-producing state. It is a long way from becoming the number one gold producer, although it does have some marginal production as well as some exploration and development prospects. Like so many of these development projects, it exists on historically producing mines, and the hope is that updated technology and higher precious metals prices can help it reach profitable production.

As an investor, the most interesting and investable project on the list was the Northern Vertex producing Moss Mine. Although it is the most investable, it has an incredible number of warrants and options that have the potential to dilute shares if the share price rises substantially. For that reason, I don’t believe that Northern Vertex presents a risk worth taking at this moment. On the positive, it does have strong financials, with growing production and reserves. If production and reserves grow large enough, then it may prove my argument wrong. I typically don’t mind investing behind the likes of Eric Sprott, but in this case, I think Eric Sprott and other high net worth investors have squeezed the value to other shareholders from the stock.

The GMV minerals project looks potentially interesting as an investor. However, the other projects on the list do not present enough production scale for me to make the argument that investors should be interested. That may change if reserves grow as exploration continues, but as of today, none of the other projects meet that criteria.

That wraps up my review of the state of Arizona. If you believe I’ve left any companies off of the list or made an error in another regard, please let me know in the comments section.

Additional disclosure: The author of this article is not a Registered Investment Advisor or Financial Planner. This writing is for informational purposes only. It does not constitute an offer to sell, a solicitation to buy, or a recommendation regarding any securities transaction. The information contained in this writing should not be construed as financial or investment advice on any subject matter. The author of this article expressly disclaims all liability in respect to actions taken based on any or all of the information on this writing.