Using a stock screener, U.K. construction group Galliford Try (OTC:GALLF) comes across with an unreal yield – and indeed it is. The group is a shadow of its former size, after a recent demerger. However, I like its strategic focus in resilient construction sectors and its cash pile.

The company was a U.K. constructor that traces its roots back to 1908. Until recently, it had a large homebuilding business as well as more general business. However, it sold its homebuilding business and focused on large construction projects such as public works programmes at the start of this year. That looked prudent in terms of timing – housebuilding prospects have been harder hit by COVID-19 and the recession than public works programmes, which may increase almost immediately due to government stimulus (source). Additionally, it strengthened the group’s balance sheet at a time when cash on hand could come in very handy.

A lot of construction groups fill their order books with whatever comes along and worry about margin down the road, so it is always good when one is disciplined about how they assess the profitability of work. Granted, this is easier said than done in practice, especially if times are tight, but it is a start in the right direction.

For example, the company has explicitly chosen to prioritise margin over revenue, including using margin thresholds and board signoff for even relatively minor (£25 million and over) projects (although according to a graph on slide 23 of its half-year results this does not cover most of its projects).

As long as there is enough workflow to meet these criteria, I regard this as a very positive indication of how the management is thinking.

Getting out of housebuilding at the start of this year seems in hindsight like ideal timing, as the sector is now pricing in an expectation of a fall in volume. Looking at the share performance of the U.K.’s two biggest housebuilders in 2020 reflects this drop in expectations. 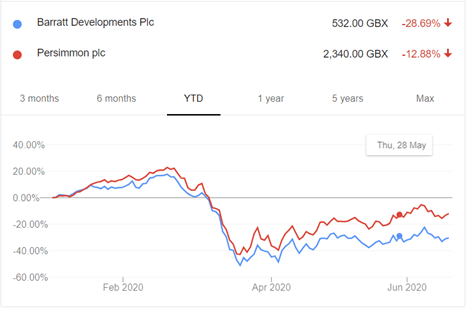 Not only did Galliford Try dodge a bullet there, but by refocusing on their public works programmes they have stepped into a field which may, in fact, show growth in the years to come (from an already high base) as the U.K. government seeks to spend its way out of recession with Keynesian style public works expenditure. For example, in his March “COVID-19 budget” the Chancellor of the Exchequer announced a plan to spend £27 billion in the coming five years on roadbuilding, one of several high-profile high-cost commitments to public works construction (source). 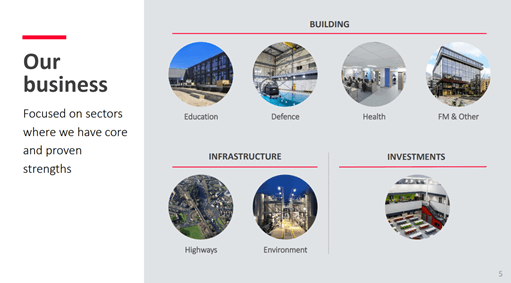 This month has seen some affirmation of Galliford Try’s new focus, with its announcement of a GBP42million university construction project and one this week for a GBP85 involvement in a mixed-use urban development project. At the time of its half-year results announcement on 12 March, it had already secured 96% of its planned order book for 2020 and 72% of its 2021 order book.

One of the thing which is especially attractive about Galliford Try, following its housebuilding disposal, is the strength of its balance sheet. The disposal was valued at approximately £1.1bn, including shares, debt transfer, and a £300m cash payment. This was a boost in the arm and means that it had pro forma net cash on 31 December 2019 of £225m, no balance sheet debt, and no pension liabilities, versus its current market capitalisation of £132m. 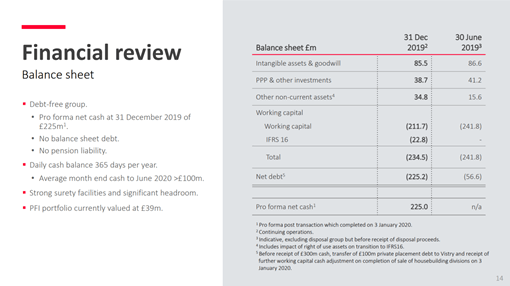 But The Business Isn’t Yet Profitable

So far, so good. However, when it gets onto the bottom line, things become less impressive. The margins are thin, unpredictable, and don’t yet reflect the margin discipline I mentioned above. 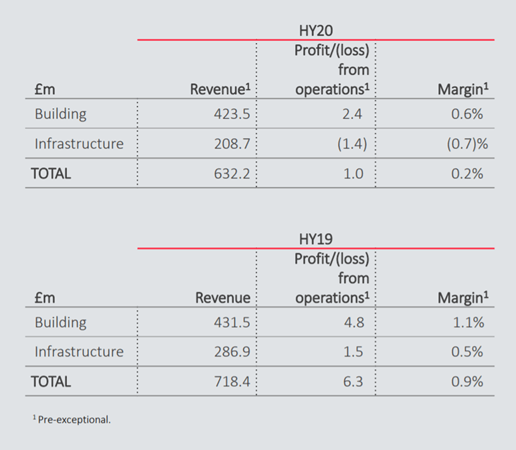 In fact, breaking down the segment analysis further and adding in the company’s central expenses, the picture looks worse. 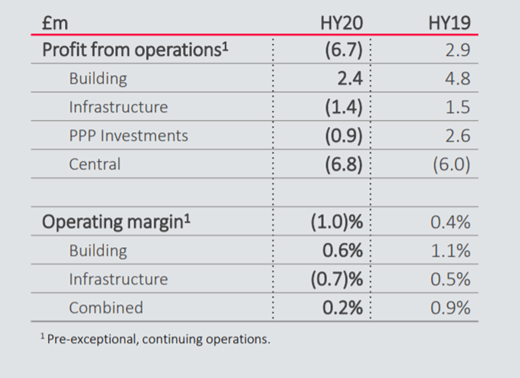 Despite that, which equated to EPS of -4.1p at the interim stage, the company did still declare an interim dividend of 1p, which can be taken as a sign of confidence. (Be sure to discount the historic dividends in any analysis, which were much higher because they reflected the pre-disposal business). The CEO also bought 100,000 shares on 12 March at £1.16, just a little below where they are now. (The company’s lowest point this year was £1.01, so it has not staged a massive recovery since March compared to many stocks).

Long-term I am bullish on the stock because it has a good strategy, a big cash pile relative to its size, and its sectors are not only resilient but may actually grow during a downturn. Plus, the long-term nature of construction contracts provides some economic insulation.

However, I am not yet initiating a position due to my concern about its ability to sustain a profitable business, which so far is unproven for the standalone Galliford Try.

W-Shaped Recession Isn't Off The Table: Pal
Big Lots: Big Gains, After A Big Performance (NYSE:BIG)
Interest Rates Are Going Through The Ceiling: The Next 'Big Thing' To Worry About
Embraer: Learning To Thrive On Its Own (NYSE:ERJ)
Supernus' Value Proposition Has Improved With Recent Sell-Off (NASDAQ:SUPN)
Saudi Aramco: Time To Invest In One Of The World's Largest Companies? (Private:ARMCO)
Lockdowns Have Led To A Growth Surge For Digital Gaming
China Mengniu Dairy: Profit Warning Was Not A Surprise (OTCMKTS:CIADF)