I last wrote about the InfraCap MLP ETF (AMZA) almost four months ago. In that article, I said that AMZA’s significantly improved investment strategy, performance, and distribution coverage ratio had strengthened the fund, but that it remained a Hold, as there were better industry funds available.

It’s been a few eventful months since I last covered AMZA, so I thought to do a performance analysis of the fund, with a strong focus on its use of leverage, which proved to be particularly impactful for the fund and its shareholders.

AMZA’s performance has been disastrous, with the fund posting double-digit losses for the past few months and significantly underperforming its index and the broader equities market.

AMZA remains a hold, at best, although the leverage means that only the most aggressive investors should consider investing in the fund.

AMZA’s performance has been, as mentioned previously, disastrous, with the fund posting double-digit losses, while massively underperforming relative to MLPs, the broader energy industry, and equities in general:

AMZA’s performance was mostly due to the ongoing coronavirus outbreak, bearish market and industry sentiment, and collapsing commodity prices. This last part is key. Oil prices have decreased by more than 60% during the year, with several illiquid futures contracts and some spot prices for more localized oil trading at negative prices for several days. Although some MLPs and midstream energy companies are somewhat insulated from commodity prices, approximately none can withstand such a collapse in oil prices without experiencing some harm.

Although AMZA’s performance was disastrous, it was also significantly stronger than that of the vast majority of leveraged MLP CEFs. AMZA has outperformed these funds by more than double-digit figures for the year. The fund suffered significantly fewer losses than its peers during the downturn, and has also experienced significantly greater returns once conditions stabilized.

AMZA performed better than most of its peers, as the fund sells covered call options, which boost income and are basically never unprofitably exercised during downturns, and probably due to some management alpha. Its relative outperformance is little consolation for the fund and its shareholders, as losses were still massive. Investors could have done worse, but they did plenty bad with AMZA.

All of these funds underperformed their index for one simple reason: leverage. Let’s take a look.

Leveraged MLP funds, including AMZA, have performed disastrously due to their use of leverage, which magnifies losses during downturns, and forced deleveraging, which reduced returns once markets stabilized.

I’ll be quantifying the impact of leverage on AMZA’s performance for the rest of the article. There is quite a bit of math incoming, but going through the numbers helped me understand just how disastrous the use of leverage was for these funds, and hopefully it does the same for readers.

Let’s start by estimating the impact of leverage on amplifying losses.

First, I took AMZA’s assets, liabilities, and net assets from the fund’s latest annual report from October 2019. Although the figures are not particularly recent, I needed information from before the downturn, so these are mostly fine.

Then, I estimated AMZA’s capital losses, assuming that the fund performed about as well as the ALPS Alerian MLP ETF (AMLP) from October 2019 to June 2020, which saw capital losses of about 29%. The results are as follows:

AMZA’s shareholder losses, equivalent to the reduction in the fund’s net assets, should have been greater than those of AMLP, 39.4% versus 28.7%. Losses are amplified by the fund’s use of leverage, as the fund still has to service the entirety of its debt even if the value of its assets decreased.

The above focuses on capital or share price appreciation, so then I had to do a similar analysis for the fund’s dividends, distributions, and underlying generation of income. Doing so is particularly tricky for MLP funds – I explain why here – but luckily for us, AMZA’s investment managers have already done the relevant calculations. I’ve highlighted the important figure in yellow: 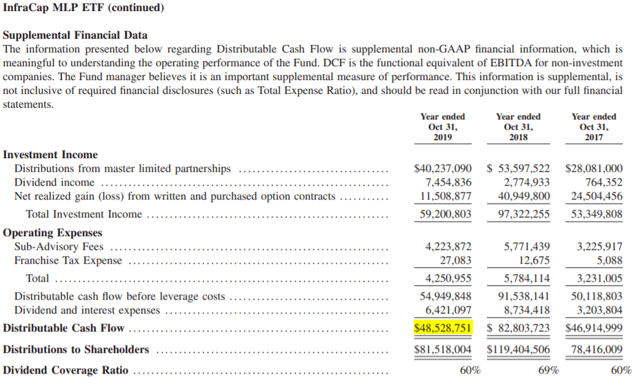 Distributable cash flow tells us how much income – basically dividends and distributions – was generated by AMZA’s underlying holdings. From this figure, and from the fund’s net asset value given before, I can estimate its dividends at 9.7%. I then add these to the fund’s estimated capital losses and arrive at estimated shareholder returns:

(Source: Chart and calculations by author)

By my calculations, and taking into consideration AMZA’s use of leverage, the fund should have experienced losses of about 29.7% for the time period in question, about 7% higher than those of AMLP due to leverage.

In reality, AMZA significantly underperformed relative to these estimates:

As mentioned previously, AMZA’s use of leverage also caused significant shareholder losses due to something called forced deleveraging. Basically, during particularly severe downturns, most leveraged funds are forced to deleverage to comply with regulatory requirement and contractual covenants. They do so by selling off assets at rock-bottom valuations, directly reducing capital appreciation and shareholder returns once markets recover, as they did during April and May.

Although we don’t have enough information to calculate the impact of forced deleveraging on the fund, we can make some very rough estimates. From looking at AMZA’s most recent holdings, it seems that the fund reduced its liabilities by about $88 million from October 2019 to June 2020 by selling off assets. Let’s assume that these assets were sold on March 31st, a few days after the market bottomed. AMLP skyrocketed by more than 82% since then, but AMZA’s sold assets obviously didn’t see any gains:

With these figures, I was able to estimate the impact of forced deleveraging on AMZA’s shareholder returns:

(Source: Chart and calculations by author)

As can be seen above, forced deleveraging caused significant losses for AMZA and its shareholders, and effectively locked in some of the losses caused during the beginning of the outbreak. This last part is key. Downturns and bear markets are common, but recoveries and bull markets almost always follow. Shareholder losses need not be final, but can be if assets are prematurely liquidated, as was the case for AMZA and as is the case for many leveraged funds.

Hopefully, the math was of interest to readers, I know it can be a bit dry, but going through it really helped me to understand just how disastrous leverage was for these funds.

As an aside, these same estimates also apply to basically all leveraged MLP CEFs. If you add up the expected shareholder returns calculated at the beginning of the analysis, -29.7%, and the estimated shareholder losses from forced deleveraging, -21.9%, you arrive at a combined estimate of -51.60%, very close the performance of the average MLP CEF during the time period of -53.2% to -55.3%. Point being, the fact that these estimates are somewhat close to the performance of the average industry fund is evidence of their validity.

AMZA’s performance during the ongoing coronavirus outbreak has been disastrous, with the fund posting double-digit losses, underperforming its index but outperforming its peers. The use of leverage proved disastrous for the fund, causing significant shareholder losses during the worst of the downturn, and effectively preventing the fund from completely benefiting from the recovery.

As a final point, after witnessing the performance of most leveraged MLP funds during the most recent downturn and seeing just how destructive leverage was, I’ve become very bearish about leveraged funds with concentrated holdings or operating in higher-risk industries. Leveraged MLP funds, including AMZA, are bound to suffer significant losses every now and then, forcing them to deleverage at inopportune times, effectively preventing them from recovering from said losses. As such, I believe that all but the more aggressive investors should avoid these funds moving forward.

Thanks for reading! If you liked this article, please scroll up and click “Follow” next to my name to receive future updates.

At the CEF/ETF Income Laboratory, we manage ~8%-yielding closed-end fund (CEF) and exchange-traded fund (ETF) portfolios to make income investing easy for you. Check out what our members have to say about our service.

To see all that our exclusive membership has to offer, sign up for a free trial by clicking on the button below!