Earnings season for the airline sector is well underway – and it has been at least as ugly as expected so far. No one could have guessed a mere six months ago that we would be talking about revenue declines of 80% to 90%, or capacity drops of 55% to 85%. Yet, here we are.

Amid the carnage, at least one airline stood out to me. Not only did Alaska Air (NYSE:

There isn’t much that can be said about Alaska’s or any of its peers’ financial performance in the second quarter. As I mentioned in a recent article, airport traffic never looked better than mediocre during the whole period. It improved a bit in June relative to a very depressed April base, only to deteriorate again in July. Therefore, Alaska deserves a hall pass for having posted pitiful passenger revenue decline of 85% on the back of a 75% reduction in capacity.

But here are the better news: faced with the challenges, the airline slashed its daily cash burn rate by over two-thirds between the end of March and the end of June. Impressively and despite having gone through the worst three-month period in the history of the airline industry, Alaska has come out of the second quarter net-cash positive on the balance sheet.

Here is what the management team had to say about the subject during the earnings call:

It is worth mentioning that Alaska achieved the feat without taking “occupancy shortcuts”. Let me explain: companies like Alaska Air, as well as Delta (NYSE:DAL) and Southwest (NYSE:LUV), enforced an open middle seat policy to reduce the risk of passenger contagion in the second quarter. The approach, of course, limited the airline’s ability to produce better financial and operational results.

The same best practices were not followed by the likes of Spirit (NYSE:SAVE) and American (NASDAQ:AAL). These are precisely the airlines that I consider to be most sensitive to and at risk from the current crisis for different reasons.

The graph below clearly shows how the different strategies described above resulted in very different occupancy rates across the industry. In the case of Alaska, I believe that being able to vastly improve cash preservation while not adhering to the “pack ’em full” fleet management approach has been quite an achievement. 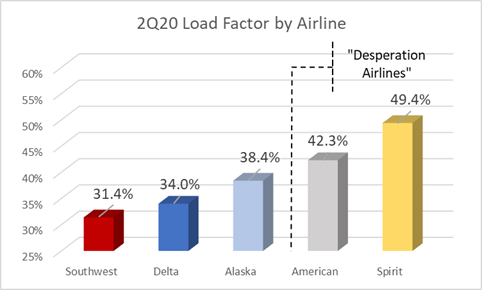 It is well understood that the US airline sector does not have much of a short-term future to look forward to. While the expectation is for gradual improvement in passenger traffic through the end of the year, hopes for a return to normal is highly contingent on effective treatment for COVID-19 being widely available and distributed to the population. Even so, the economic recession may prevent the industry from fully recovering until 2022 at best.

But once the dust settles, I believe that the airlines with leaner operations and a cleaner balance sheet will be best positioned to thrive. Meanwhile, others will be stuck with a few quarters’ worth of debt accumulation and servicing to deal with. In this longer-term scenario, I see Alaska Air as a likely winner in the airline space, and its stock as one of the most compelling buys at today’s depressed levels.

Beating the market by a mile

The only airline stock in my All-Equities Storm-Resistant Growth portfolio is Southwest, and it has been a drag to performance lately. But other mega-cap names across a wide range of sectors have been driving the portfolio’s returns, which have topped the S&P 500 by a mile (see graph below).

To learn more about the storm-resistant growth approach to investing, I invite you to join our community. Click here and take advantage of the 14-day free trial today. After that, don’t forget to join the Live Chat so we can share a few thoughts.

Disclosure: I am/we are long LUV. I wrote this article myself, and it expresses my own opinions. I am not receiving compensation for it (other than from Seeking Alpha). I have no business relationship with any company whose stock is mentioned in this article.