AbbVie (NYSE:ABBV) is likely to perform well over the next several quarters. The company continues to be undervalued, and it just got blessed with an investment from Warren Buffett’s Berkshire Hathaway. AbbVie appears poised to finally break out of its recent trading range, and into a new one with strong support around $100.

AbbVie’s 2019 acquisition of Allergan (AGN) was not appreciated by the markets. It provided needed diversification, which AbbVie required due to its overwhelming dependence upon Humira, a blockbuster anti-inflammatory and arthritis medication. AbbVie successfully handled merging with Allergan, which the market continues to undervalue.

The value of pharmaceutical and biotech assets like those AbbVie acquired from Allergan should have increased since the purchase, and are likely to do well in the near term. This undervaluation hit absurd levels prior to the election, where fear and uncertainty over healthcare assets are always likely. This uncertainty visibly weighed upon the ABBV chart, but has since released with gusto.

According to Berkshire Hathaway’s most recent 13F filing, the company acquired 21,264,316 shares of AbbVie last quarter. This recently reported information is a blessing to AbbVie, as Buffett’s purchase is meaningful to a great many investors. While it is unclear whether this purchase was really Buffett or one of Berkshire’s known investment managers, Berkshire initiated positions in AbbVie and several other biopharmaceutical large caps. This is an indication that this industry is undervalued, or at least that the opinion that large biopharmaceutical companies with strong dividend policies are undervalued is shared by the Oracle of Omaha’s squad.

Pharmaceutical and biotech companies consistently face political rhetoric on pricing and many other key issues. What just occurred is not unprecedented, and I believe subsequent outperformance is likely. Also, AbbVie’s major acquisition of Allergan in 2019 was significant and complicated, and such large deals are probably more difficult to do under pandemic restrictions. They may also be more difficult due to regulatory opposition, though this is less certain.

In any case, both AbbVie and Allergan were profitable companies whose businesses, in 2019, appeared potentially less valuable, at which point they merged. Now, their businesses should be considered more valuable, and the successful merger should also improve both. Moreover, the market was concerned that AbbVie’s financing of the transaction would be too costly, but it was not.

AbbVie substantially underperformed the broader market in 2019, as well as most other biopharmaceutical companies. ABBV’s outperformance over the last few weeks has helped it catch up. This chart compares ABBV to the S&P 500 during 2019 (The IBB and XBI biotechnology ETFs are also included).

AbbVie is now again approaching its near-term high, and one which has caused it much difficulty in the past. This around $100 valuation is one where many prior investors have appeared happy to sell, probably because they bought around there a while ago. This has created resistance to a move higher. I believe that once this selling pressure subsides, AbbVie is likely to make a significant move above $100, after which this resistance shall become support. A Buffett bounce could help make that happen.

It appears that ABBV was in the process of a true breakout in early February, after absorbing Allergan without noticeable indigestion, but it collapsed along with the market. I believe ABBV shares are ready to move out of a long-term base that the shares built for about three years. AbbVie peaked in 2018 at prices in the $120s, and then fell below $100 before announcing plans to acquire AGN in mid-June of 2019.

If ABBV is able to break out or melt up through $100 here, shares appear likely to test and possibly make all-time highs within the next year. This would mean a move to and potentially above the $120s within 2021. Buffett’s blessing may be enough of a catalyst to initiate such a melt-up here.

Before the Allergan acquisition, ABBV’s future was tied to Humira, which is a blockbuster that continues to grow sales beyond expectations. Since Humira will eventually lose patent protection and was already facing competition from biosimilar drugs, it was reasonable to use some of Humira’s cash flow to diversify.

Allergan was best-known for its aesthetic and/or cosmetic treatments, such as Botox, Juvederm, and CoolSculpting, but Allergan also owned a promising neuroscience division. One asset from that division is Vraylar, which is the fastest-growing atypical antipsychotic in the United States. Vraylar could be a future blockbuster. Allergan also had some late-stage development drugs that could end up being successful.

Allergan also brought over $2 billion in revenue from eye care, nearly $2 billion in gastrointestinal revenue, and a women’s health division that is likely to grow to bring in over $1 billion annually within the next few years. 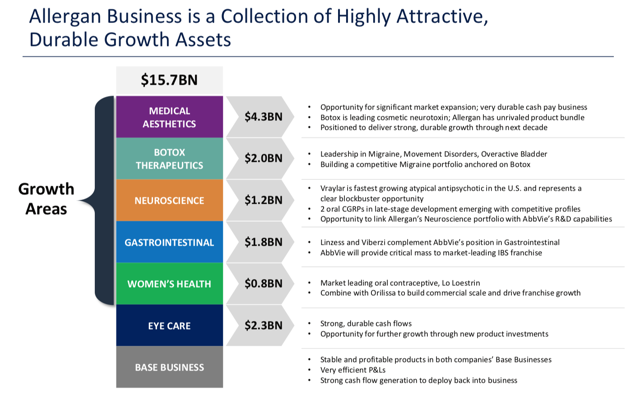 (Source: AbbVie’s The Combination of AbbVie and Allergan presentation)

AbbVie is a Dividend Aristocrat and did increase the dividend last month from $1.18 to $1.30, going forward. The last payout at the $1.18 level should have been received this week. This new payout is about triple the market average, with probable growth in the coming years. AbbVie’s current payout ratio is now around 50 percent of earnings, and the company also has a history of buying back shares, so it should be able to pay and grow the dividend without much difficulty.

AbbVie declined by about 20% in the three months preceding its recent pre-election bottoming, and I believe that all of this decline was based upon the fear and uncertainty surrounding political entanglements into things like drug pricing, patent protection, future acquisitions, repurchase plans, dividends, and other matters that are meaningful to evaluating ABBV share pricing.

Based upon this recent occurrence, we should accept that ABBV could decline by as much as 20% within the next three months and still be within its trading range. Further losses are certainly possible, but that $80 looked to be very strong support on that latest test. A return to the quarantine bottom could mean a halving.

Another legitimate issue for AbbVie is the continued dependence upon Humira. AbbVie actually made a name for itself on the back of Humira, which is a true blockbuster. AbbVie’s ability to acquire Allergan was largely due to Humira, and the need to acquire it was driven by concern over a need to diversify from Humira.

Even with Allergan added to the portfolio, Humira was still about 30% of last quarter’s total revenue. Humira is still growing, but that growth should slow from here. Also, biosimilar competition has the strong potential to affect margins, as well as prescription writing trends. Despite Humira continuing to be a cash cow, AbbVie is sort of stuck in a spot where there is likely to be a drum beat about Humira’s declining growth and/or revenue due to biosimilar competition.

While the risk of biosimilar competition is certainly on the rise, it appears likely that it will not have a material effect upon near-term expectations. Thankfully, AbbVie has directly addressed such concerns by grabbing diversification through Allergan. I believe the perceived imminence of this risk is somewhat legitimate, but also largely exaggerated. This uncertainty is a part of why AbbVie is undervalued, and why it may remain undervalued.

AbbVie continues to be a relatively undervalued biopharmaceutical company. The company should appreciate in the coming years, and should outperform in the near term. AbbVie also has a dividend that currently yields over 5 percent, with probable annual dividend growth going forward.

AbbVie’s Allergan acquisition added size, scale, and diversification that was never fully appreciated, and which is still likely to result in additional improvements. AbbVie appears capable of breaking out and making new all-time highs within the next year, and the catalyst for such a move may have just occurred with Berkshire’s 13F filing. I believe $100 is likely to soon flip from resistance to support, and that ABBV has strong potential to make a new all-time high well before announcing another probable dividend increase next autumn.

Disclosure: I am/we are long ABBV, XBI, IBB. I wrote this article myself, and it expresses my own opinions. I am not receiving compensation for it (other than from Seeking Alpha). I have no business relationship with any company whose stock is mentioned in this article.

Would You Go To China on Business Now?
Kodiak Initiates Phase 3 Trial, And Other News: The Good, Bad And Ugly Of Biopharma (NASDAQ:KOD)
How The U.S. Elections Could Impact Markets
Odd Brilliant Ways to Beat Your Competition With Technology
Sachem Capital: Good Times For Hard Money (NYSEMKT:SACH)
15 More Shares - Restaurant Brands International Inc. (NYSE:QSR)
No One Can Copyright These 15 Things, and They May Surprise You
Your Startup is About to Fail. Here are 20 Reasons Why