At current strip prices instead, it appears that Denbury would generate approximately $245 million EBITDAX after hedges. I’ve previously valued Denbury at a 4.0x to a 4.5x EV/EBITDAX multiple, which would result in an enterprise value of $980 million to $1.103 billion.

The company estimated that it would have around $158 million in net debt at the end of 2020. This is a fair bit less than its post-restructuring debt at emergence, but it did expect to generate $68 million in positive cash flow (including $8 million from surface land sales) in Q4 2020 with sub-$40 WTI oil. 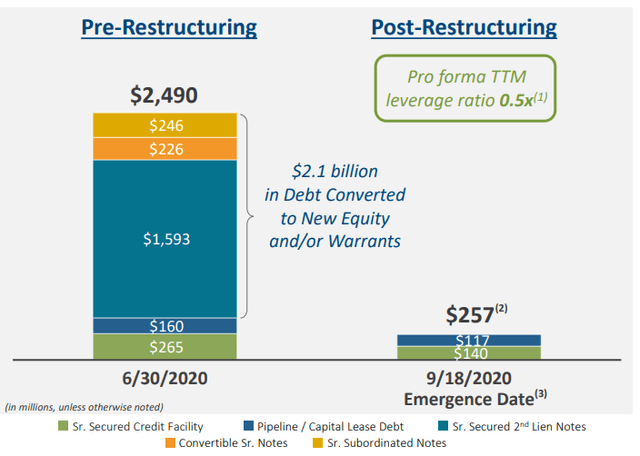 Denbury’s Series B warrants have a strike price of $35.41 per share. Using a similar 4.0x to 4.5x EV/EBITDAX multiple would result in the warrants starting to be in the money at around mid-$50s WTI oil. 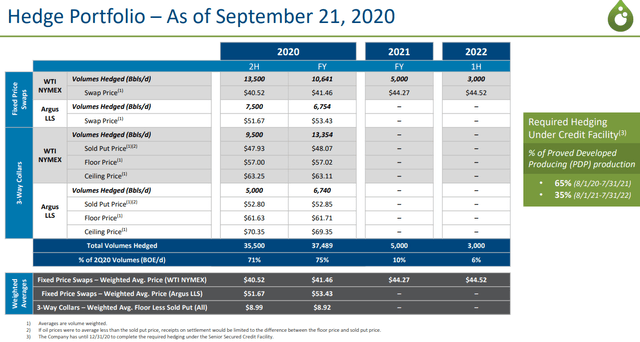 If it can add further hedges in the mid-$40s (for WTI oil), that would be acceptable for Denbury given that its breakeven point appears to be around there.

Denbury has emerged from restructuring quickly and now has a healthy balance sheet and a breakeven point in the mid-$40s for WTI oil. The current oil pricing situation is manageable for it, although $50s oil would be better for it, as that would allow it to both generate positive cash flow and maintain or moderately grow production.

Denbury is currently trading in its estimated fair valuation range and could be considered a good value if its shares drop a bit further. Denbury’s warrants are likely to remain well out of the money for now, but could become in the money with mid-$50s WTI oil.

We are currently offering a free two-week trial to Distressed Value Investing. Join our community to receive exclusive research about various energy companies and other opportunities along with full access to my portfolio of historic research that now includes over 1,000 reports on over 100 companies.

Taking Care Of Gains With Addus HomeCare - Examining A Potential Long-Term Compounder (NASDAQ:ADUS)
Helium Is Soaring On Red-Hot Demand, Shrinking Supply
Saudi Aramco: Time To Invest In One Of The World's Largest Companies? (Private:ARMCO)
FEN-tastic Performance For An MLP Fund (NYSEMKT:FEN)
Vornado Realty Trust: This NYC Landlord Has Rarely Been This Cheap (NYSE:VNO)
Should You Consider a Trading Coach?
Principal Financial Group: 23% Upside Plus A 5.8% Dividend (NASDAQ:PFG)
These 9 Silver Miners Are A Basket Of Opportunity