Pinterest (PIN) is building a differentiated brand in social media, and the company benefits from an enormous room for expansion in both online advertising and e-commerce over the years ahead. Management is executing soundly, and the stock is not too expensive at current levels.

In simple terms: a high-quality business model, strong execution, and abundant room for further gains are three main reasons why I own Pinterest stock.

Pinterest is a mid-sized business operating in a huge and growing market such as online advertising, and now increasingly venturing into e-commerce. The company is barely getting started in terms of capitalizing on its long-term potential for growth.

The business model is also quite attractive. When users find something that they like on Pinterest, they can pin those images to specific boards. Pinterest’s algorithm then suggests more new pins based on the user’s interest and previous activities, and some of those suggestions can be advertising.

Now the company is actively integrating better e-commerce capabilities into this platform, which could open the door to enormous opportunities.

When ads are relevant and useful, it’s a win-win for both users and advertisers, which is a key differentiating factor versus other social media networks with invasive advertising. Besides, Pinterest is focused on inspiring and uplifting content, which sets it apart from the big social media platforms.

Users attract each other to the platform in search of high-quality content and more interactions, and this network effect creates a self-sustaining cycle of increased growth and competitive strength as the company gains more users over time.

Pinterest is still young and investing for growth, so it is losing money on a GAAP basis. However, the business model scales very well, because most of the company’s expenses are relatively fixed in comparison to revenue, so profit margins can be expected to expand as Pinterest grows its top line over the years. As a reference, Facebook (

Pinterest content goes well with consumer interest during the pandemic. Content related to areas such as cooking and recipes, home fitness, home entertainment, or decorating a home office generally works very well on the platform. Also, when consumers have more time to spend on social media, they are more likely to venture into a platform such as Pinterest, which is not as heavily used in normal times as the big giants in the space.

The company registered a big increase in two main demographic segments during the second quarter: resurrected users, meaning users who had been away from the platform for a long time before the pandemic, and also relatively young users, with users under 25 years old growing twice as fast as users over 25 years of age during the second period.

The big question is how much of this is a permanent versus a transitory increase in users and engagement. Management specifically said that engagement remained strong among these two user groups in July after the shelter-in-place restrictions were eased, so this bodes well for the company going forward. However, even if Pinterest manages to retain and engage those new users well, we need to acknowledge that user growth in mature markets will most probably slow down in the future.

It is too early to tell how demand trends will evolve after the pandemic, but it makes sense to expect a deceleration in growth, especially in North America, where Pinterest already has higher penetration levels. However, accelerating growth in international markets and higher engagement in shopping activities could be major game changers for Pinterest going forward. The pandemic will come and go, but the acceleration in demand could have permanent benefits for the company.

Regarding engagement in shopping, it is also very early in the game, but the trend looks encouraging. Catalog ingestion increased more than 350% sequentially in the second quarter of 2020 and grew 10x in the first half of the year. The percentage of users who visited shopping-only surfaces grew more than 50% in the first half of 2020, and product-only searches grew 8x in the same period.

This growth was driven by the Shopify (SHOP) integration, which became generally available in early May, and also by infrastructure improvements to the company’s feed uploader. Pinterest launched the Shop tab and the ability to shop from boards in order to improve discoverability across a growing inventory base.

As opposed to the classic e-commerce platform where consumers typically already know what they want to a good degree, Pinterest is providing a platform for consumers to browse images and discover what they want to buy, finding new ideas, and buying those products from verified merchants. Now that consumers are staying away from physical stores due to both the lockdowns and the already booming omnichannel revolution, this approach is more promising than ever.

With a market capitalization value of around 36.6 billion, Pinterest is not a particularly small business, but it still has a lot of room for appreciation if the company keeps executing well.

As a comparison, both Facebook (FB) and Alphabet (GOOG, GOOGL) are massively larger than Pinterest in terms of market value, and the two online advertising leaders have delivered huge gains over the past several years, so there is no reason to believe that they have reached stagnation at this point. 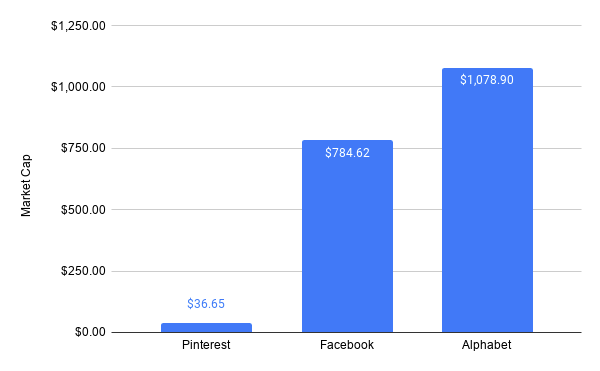 In terms of revenue, Pinterest is expected to make less than $1.5 billion this year, while Facebook and Alphabet are expected to produce $80.2 billion and $173.7 billion respectively. Facebook is expected to increase revenue by 25.8% in 2021, and revenue growth at Alphabet is expected to be 26.1% next year. The numbers are quite clear, and they show that Pinterest is operating in a huge and growing market, and it is barely scratching the tip of the iceberg in terms of capitalizing on its opportunities. 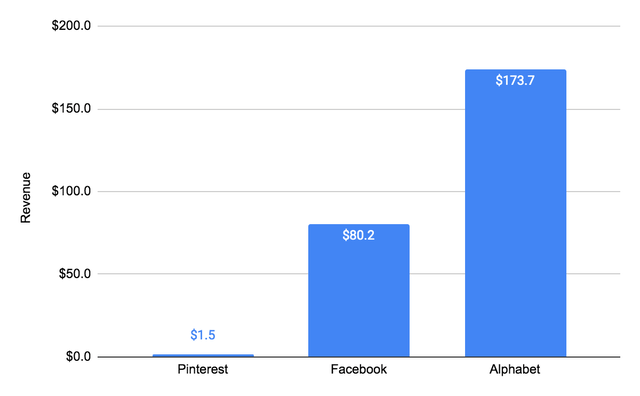 Pinterest stock is currently trading at a price-to-sales ratio of 13.4 times revenue estimates for 2021. For a company that can sustain revenue growth rates around 30% over the middle term, this is hardly excessive.

Competitive risk is always an important risk factor to watch, especially as the company is operating in such a dynamic industry dominated by bigger players. But Pinterest has proven its ability to do well in spite of the competition and to build its own identity and ecosystem with a differentiated approach.

In times when most social network platforms are full of toxic interactions and intense political discussions, Pinterest can offer a valuable alternative for those seeking a more positive and inspiring experience. The market is huge, and Pinterest has both a unique identity and solid competitive strengths driven by the network effect.

Over the long term, Pinterest has the potential to deliver both strong revenue growth and expanding profit margins, and this should produce rewarding returns for investors in the company in the years ahead.

A subscription to The Data Driven Investor provides you with solid strategies to analyze the market environment, control portfolio risk, and select the best stocks and ETFs based on hard data. Our portfolios have outperformed the market by a considerable margin over time, and The Data Driven Investor has an average rating of 4.9 stars out of 5. Click here to get your free trial now, you have nothing to lose and a lot to win! 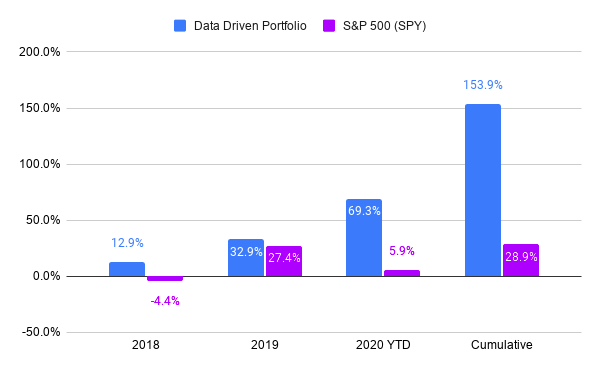 Disclosure: I am/we are long PINS, FB, GOOG. I wrote this article myself, and it expresses my own opinions. I am not receiving compensation for it (other than from Seeking Alpha). I have no business relationship with any company whose stock is mentioned in this article.

The Hibernating Reptile Portfolio
Week 23 MDA Breakout Forecast: Short-Term Picks To Give You An Edge
Shinhan Financial Group Co Ltd (SHG) on Q3 2020 Results - Earnings Call Transcript
Bed Bath & Beyond Is Burning Cash Like A Drunken Sailor (NASDAQ:BBBY)
The Stoner Side Of Cannabis (Podcast Transcript)
Lockdowns Have Led To A Growth Surge For Digital Gaming
Pinterest: Back In A Big Way (NYSE:PINS)
VanEck Vectors Video Gaming And eSports ETF: Riding The Evolution Growth With This ETF (NASDAQ:ESPO)